Standing between the racks of knock-off Ray-Ban and Gucci sunglasses, Vladimir Borsch guards boxes of retro-looking metal and plastic eyeglass frames that were produced across the street in the 1980s and 1990s.

“The quality was much higher back then,” Borsch says. “Now everything comes from China.” 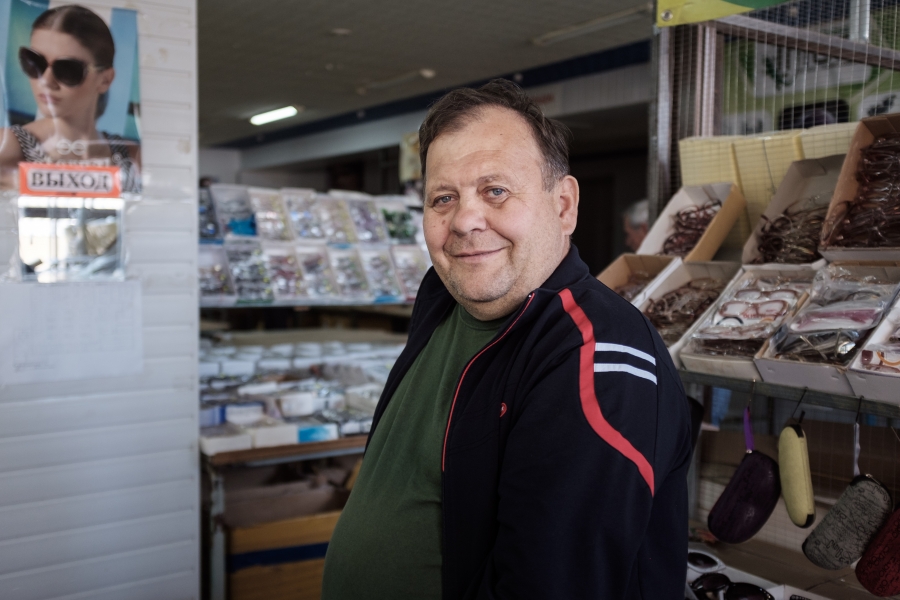 Vladimir Borsch, who once worked as an emergency worker at the Izyum Optical-Mechanical Factory, now sells eyeglasses frames in what was once the factory’s cafeteria.

Borsch works at one of the most unusual markets in Europe. Located in the cafeteria of a factory that was once the largest producer of optical equipment in the Soviet Union, the optical market in the town of Izyum sells glasses and lenses at bargain-basement prices. Much of the supply now comes from China, but buyers can still choose from stockpiles of leftover optical glass and eyeglass frames that were produced in the city until just a few years ago.

The town of Izyum, a name that translates as “raisin,” sits less than 10 miles from Donetsk Oblast, one of the southwest regions of Eastern Ukraine that has been upended by more than five years of armed conflict. Although Izyum has not experienced violence since the first months of the conflict, the town suffers from many of the same economic and humanitarian issues that have plagued the nearby Donbas region, an area that was once one of the most important industrial heartlands of the Soviet Union. 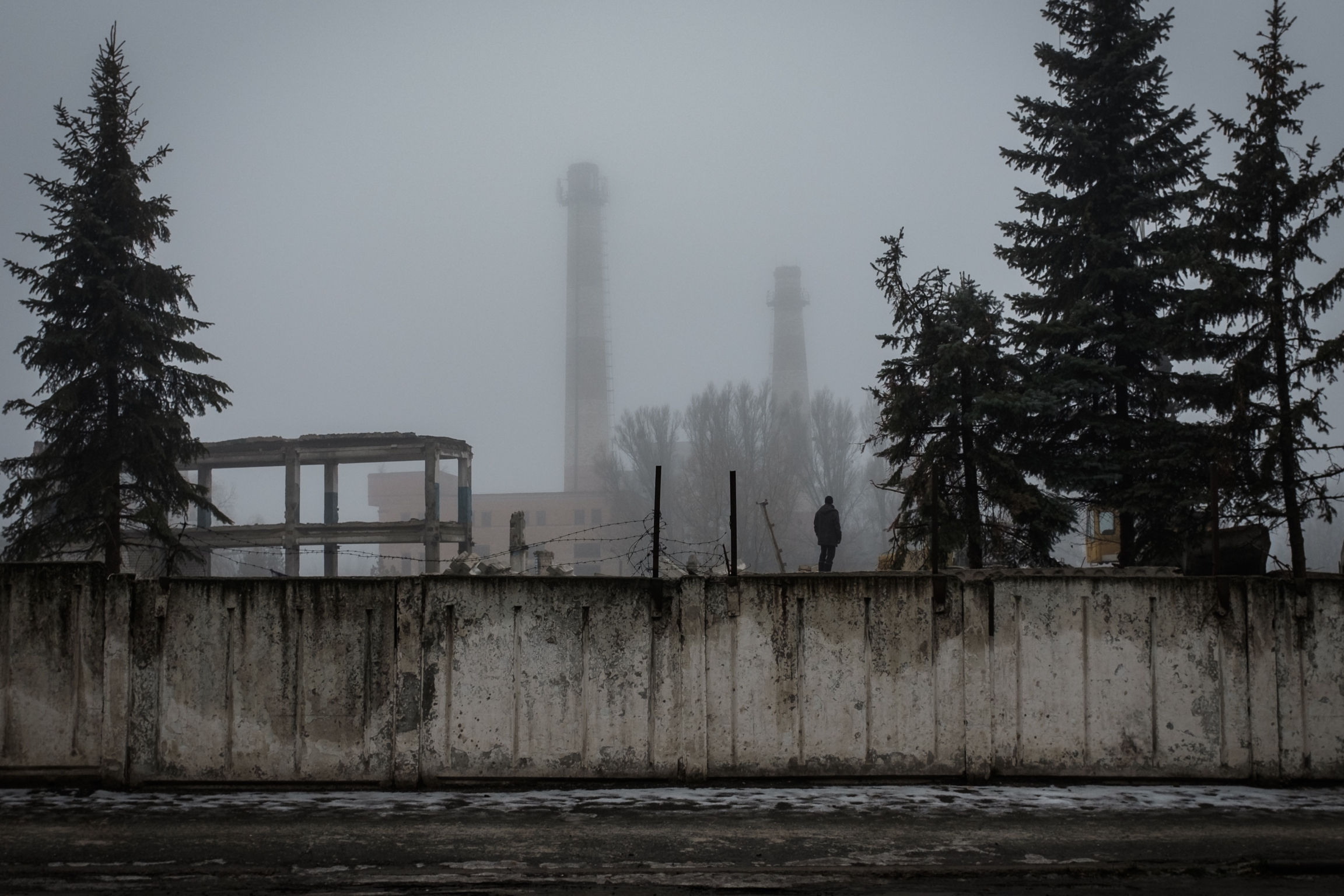 A man stands near the ruins of the Izyum Optical-Mechanical Factory, which was once the largest producer of optical equipment in the Soviet Union. Only a few buildings remain standing as developers continue demolition.

The optical market in Izyum is one of the most striking examples of how deindustrialization has changed Ukraine since independence. Like most vendors at the optical market, Borsch worked for the Izyum Optical-Mechanical Factory, one of five major industries that fed the town, but lost his job as an emergency worker at the factory as the economy changed. 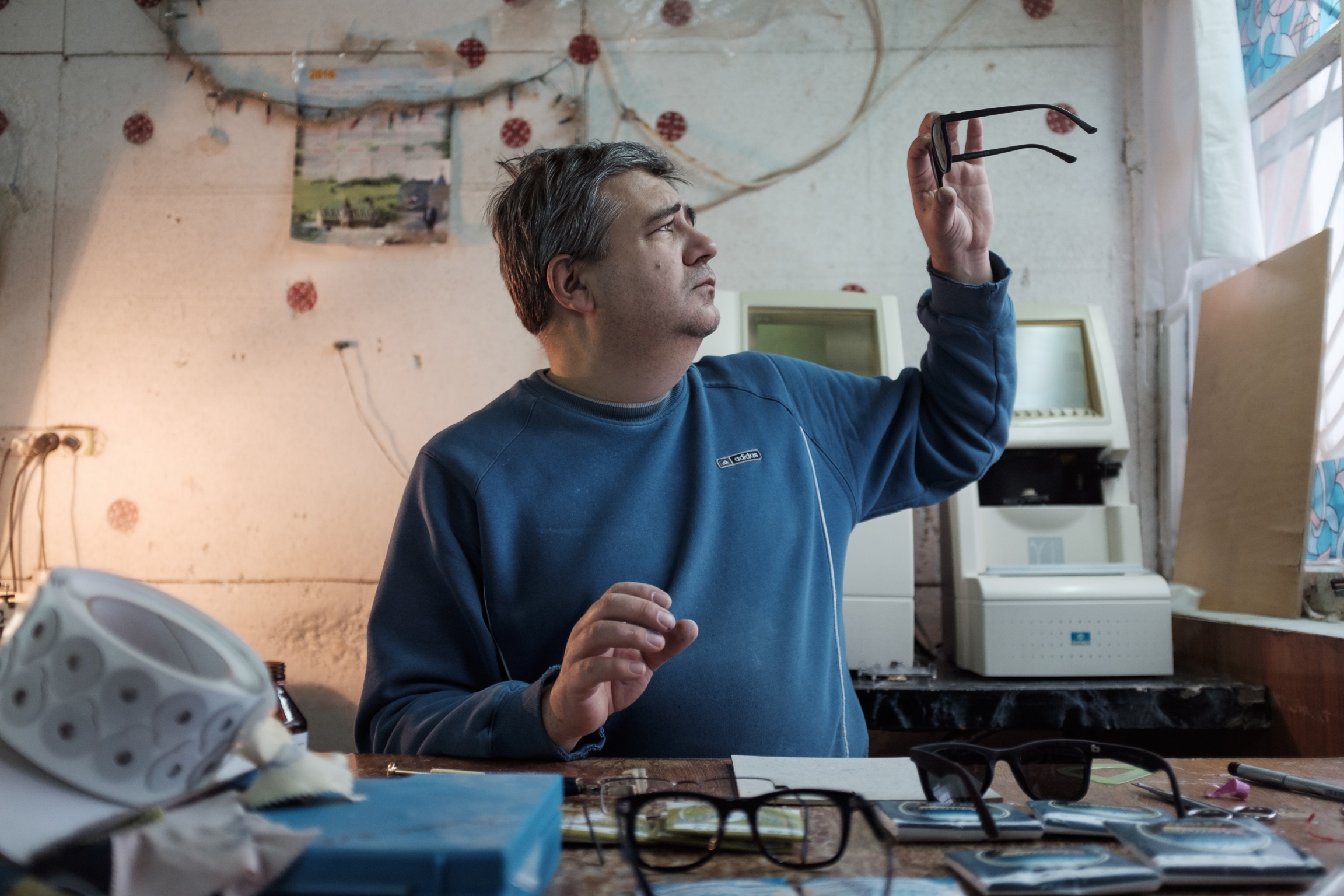 Vitaliy Mikhalchuk inspects a pair of glasses at the optical market near the former Izyum Optical-Mechanical Factory.

According to a company book published 1984, Soviet planners expected the Optical-Mechanical Factory to produce 40 million lenses a year while employing 7,400 people. As was the case in many Soviet cities, life revolved around the factory, which provided housing and entertainment — including a sports complex with an Olympic-size swimming pool just outside the factory gates.

But the transition away from Soviet socialism in the 1990s brought hardship to the region. Izyum was once home to five major factories that employed tens of thousands of people. Over the past 30 years, all have closed, except for one that produces military equipment and employs only a tiny fraction of the number of people it did in the 1980s.

“It was a real city,” said Tolik Mokrushin, who worked as a technician in the factory and now sells eyewear in the market. “We produced everything — meat, milk and industry." 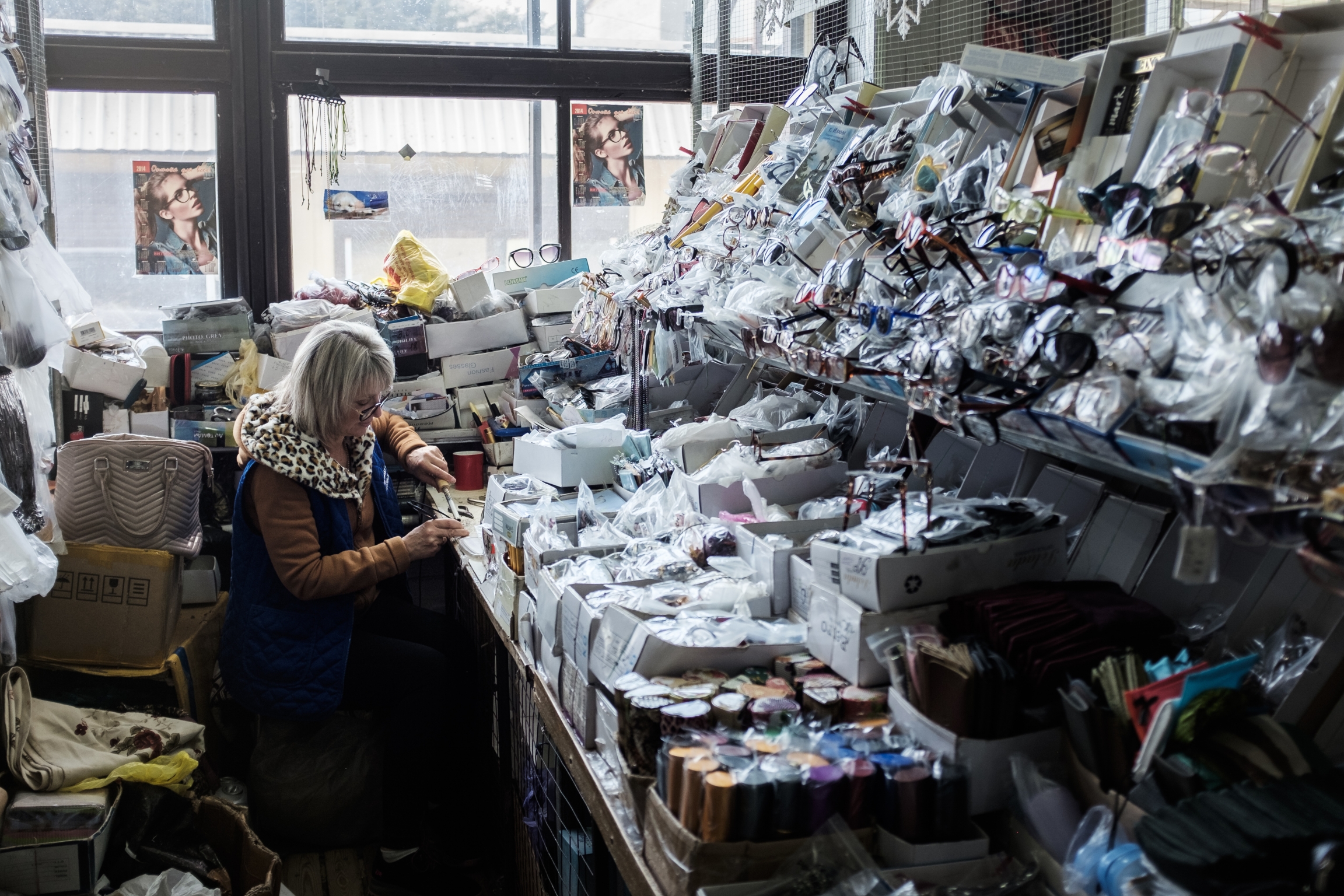 In addition to Chinese-imported glasses and lenses, vendors at the Izyum optical market sell surplus materials in what was once the cafeteria of the Izyum Optical-Mechanical Factory.

Among the factories that have closed is the optical factory. In the 1990s, the Ukrainian government tried to restructure the industry, which had proved uncompetitive in the new market economy. The factory declared bankruptcy before the end of the decade and production decreased as workers were laid off and Ukraine imported more Chinese goods. In 2010, it was announced that the Izyum Optical-Mechanical Factory would be liquidated. All production ceased two years later.

The cafeteria housing the optical market is one of the few remaining pieces of the factory. Across the street, cranes are tearing down the buildings and equipment on the factory’s territory, which was sold to a private investor in what local activists say was a suspicious scheme to enrich local politicians. Vyacheslav Maslov, an activist and local business owner, points fingers at the town’s current deputy mayor, who liquidated the factory, for selling off its materials and pocketing the profit. 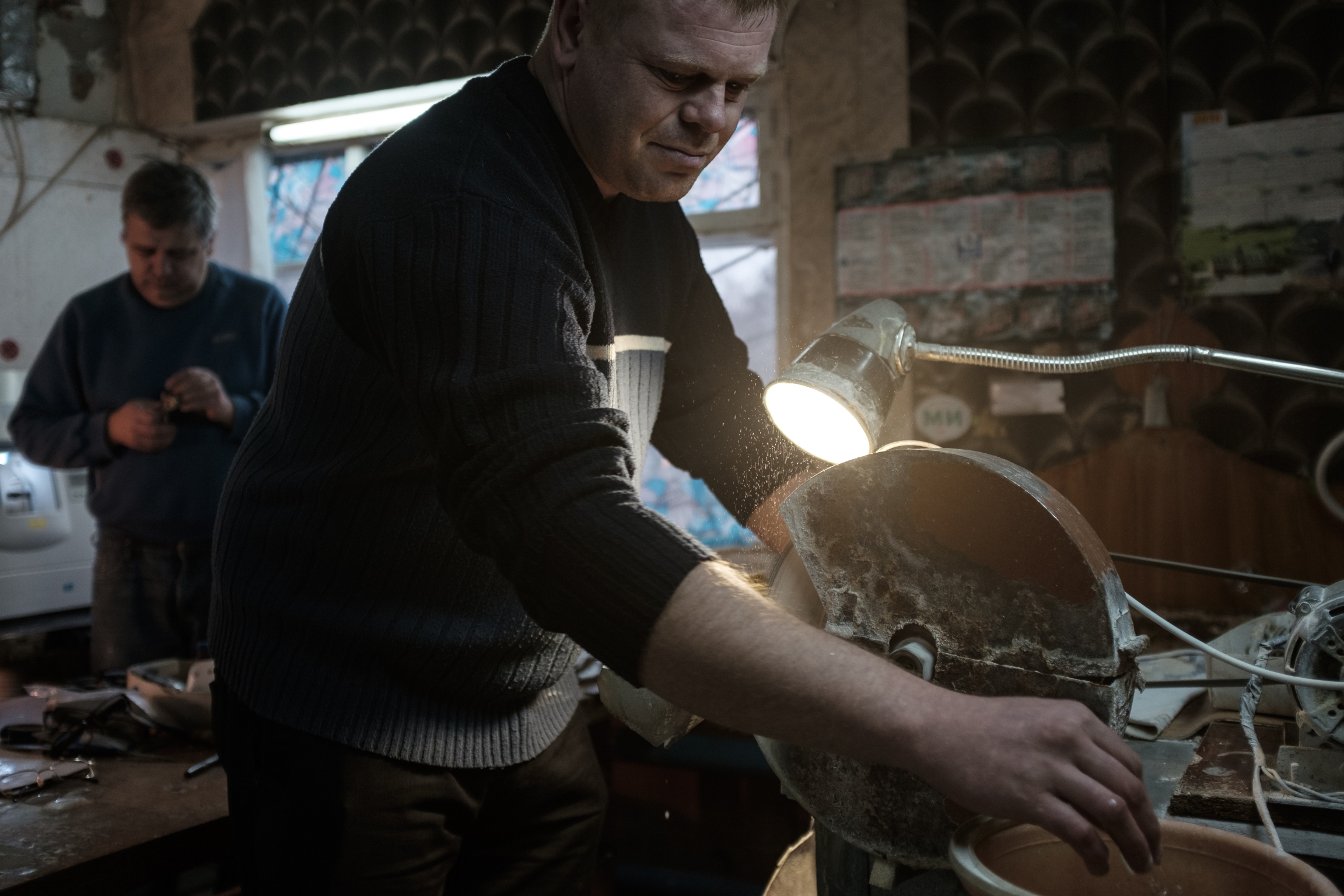 Vitaliy Mikhalchuk (left) and his coworker, Maksim, cut lenses to fit in eyeglasses at the market near the former Izyum Optical-Mechanical Factory. Mikhalchuk once worked as an electrician.

As the factory began closing, the market popped up as laid-off workers struggled to find other income. What comes next, however, is uncertain. This spring, a nearby museum of optics that detailed the history of the factory and the town’s industrial past shut its doors for good, a development that does not bode well for the market’s future.

“In five years the market will be closed,” Borsch said. “There are no buyers anymore.”

Mokrushin said he blames people’s greed on the demise of the town and the region as materials and property are sold off to commercial interests.

“People don’t respect that their grandparents and great grandparents were peasants ... Their generation didn’t work to make our lives difficult. They worked to make it better. Now we are a country of thieves.”

“People don’t respect that their grandparents and great grandparents were peasants,” he said. “It’s a bitter truth. Their generation didn’t work to make our lives difficult. They worked to make it better. Now we are a country of thieves.”

According to Mokrushin, the closure of the factories in Izyum has forced people to leave the town. Others unable to find work have turned to alcohol or substance abuse.

“There are no prospects for young people here now,” Mokrushin said. “Many ran off. Some stayed in their nest and ended up in the cemetery. There were a lot of specialists. Some went to Russia, some went to Europe.” 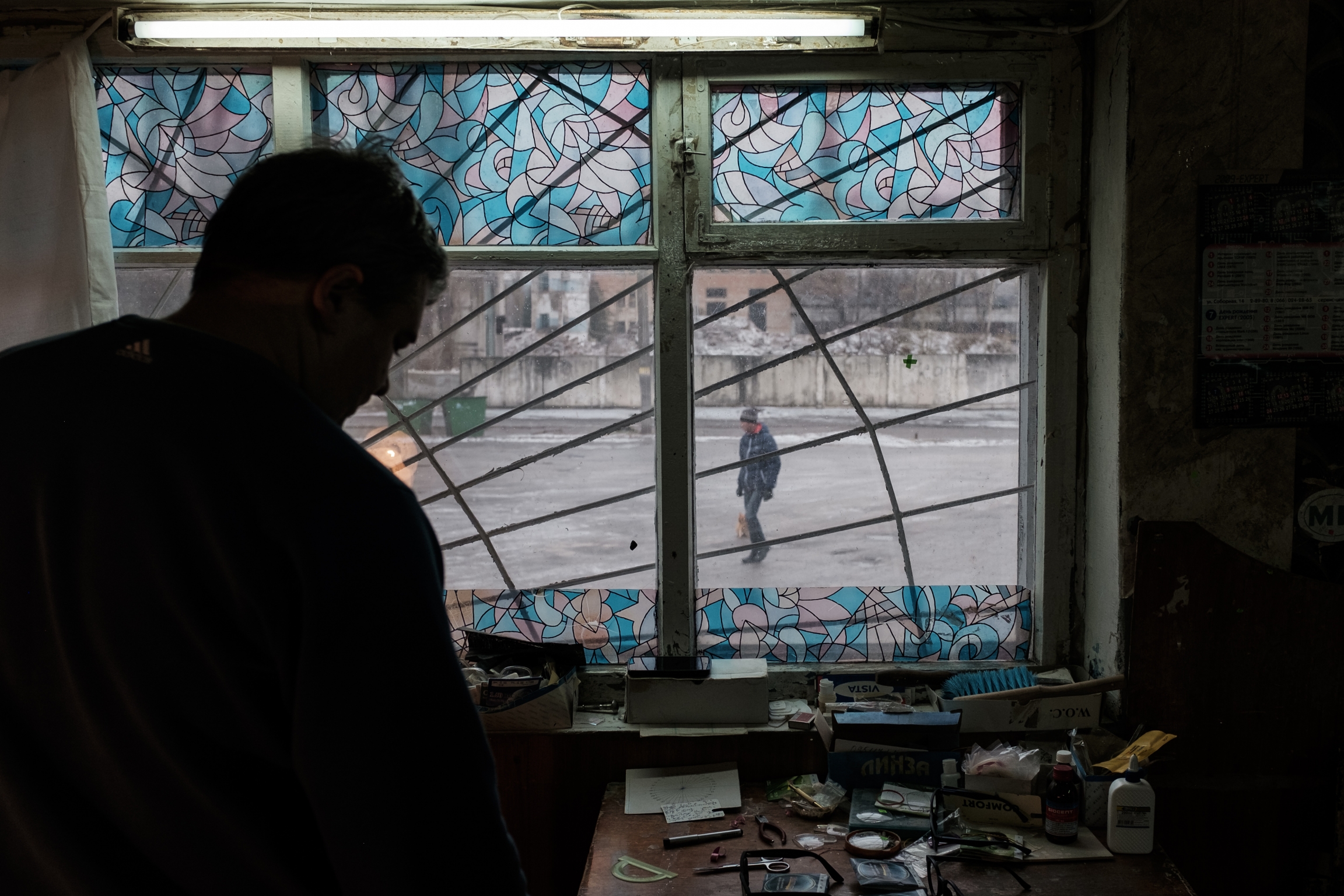 According to government data, the town’s population has declined from more than 64,000 residents in 1989 to just over 47,000 this year, despite an influx of people seeking refuge from the nearby conflict. Many of those who remain are pensioners.

A similar story is taking place across Eastern Ukraine, especially in the Donbas region, where coal mines and other industries have closed — due both to the conflict and the Ukrainian government’s efforts to shutter unproductive state industries. 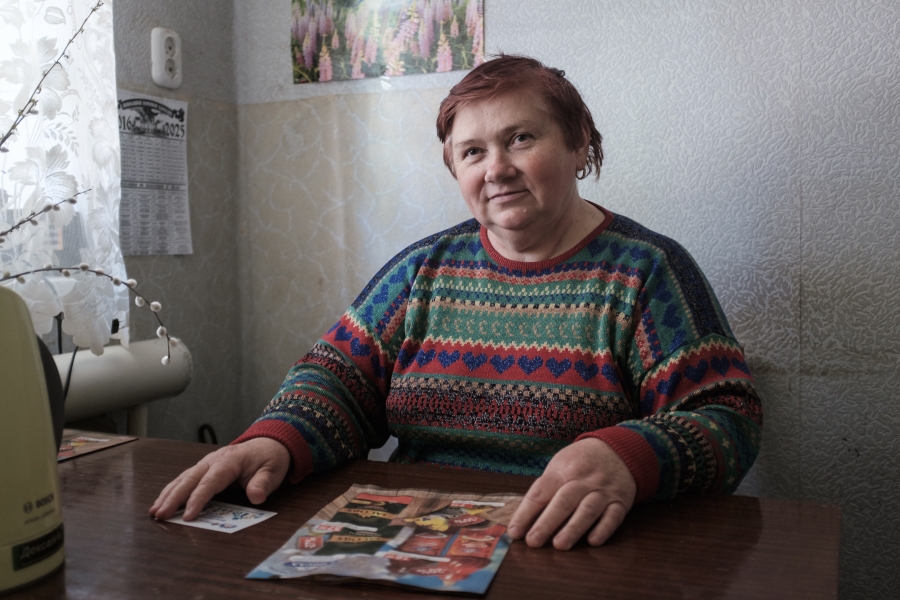 Iryna Shevchenko, once worked as a dispatcher at a factory that produced bricks. She now volunteers at the town’s history museum. Her daughter moved to Poland to find work.

Iryna Shevchenko, who worked as a dispatcher at a factory that produced bricks and now volunteers at the town’s history museum, said she has watched as the town has shrunk.

“Young people left for Kharkiv to study and then never came back,” Shevchenko said, referring to Ukraine’s second-largest city, located about two hours away by train. “Many have gone to Moscow, Poland, anywhere they could find work. There are very few people who remain. My daughter studied in Kharkiv. Now she works in Poland.” 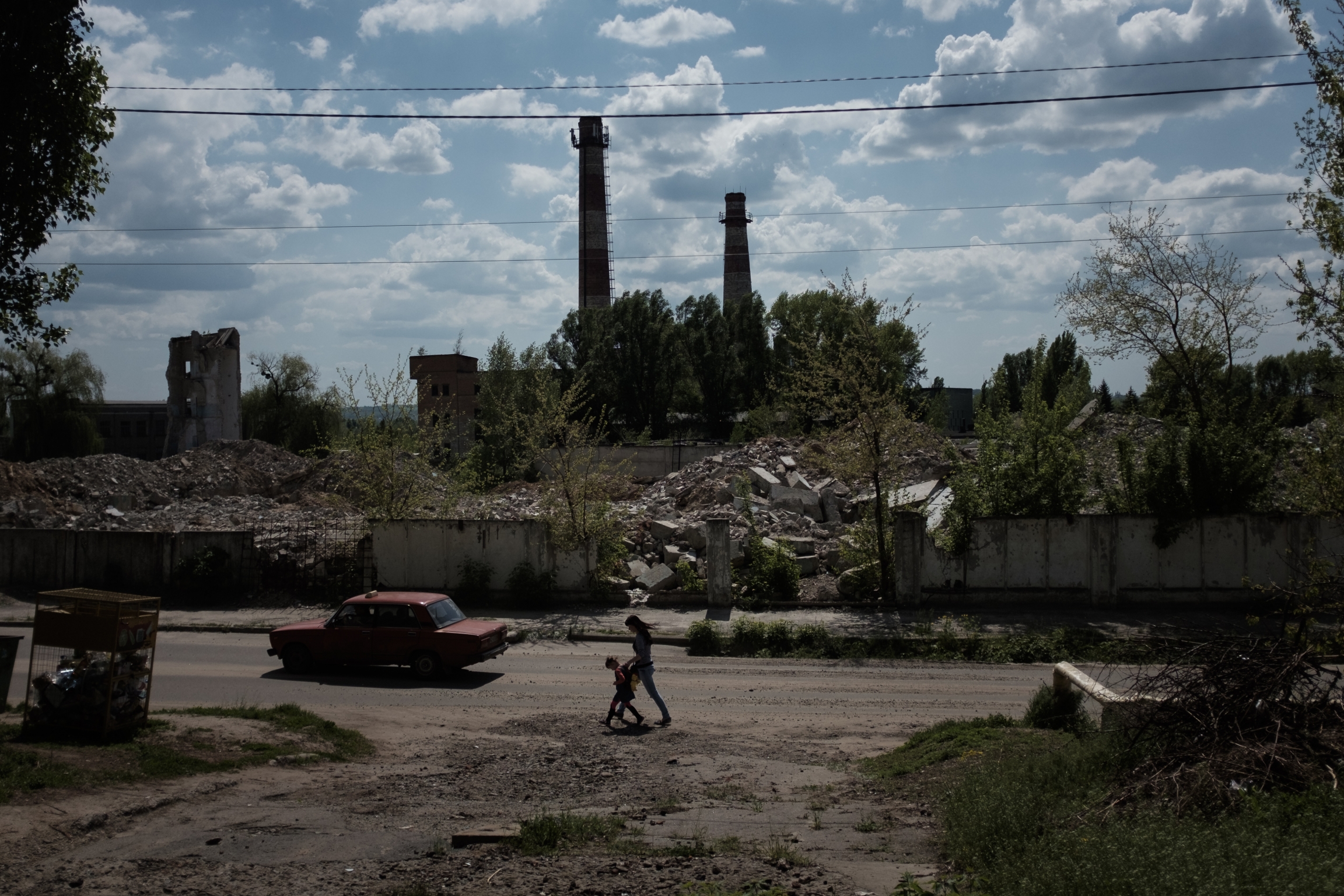 Izyum was once home to several large factories, but industrialization has led to the closure of the major industries fed the town. The population has sharply declined and steady work is now scarce.

Dina Listopad, who also works at the history museum, said the loss of factory life has changed the face of the town and the region for better and for worse.

“Izyum thought of itself as the capital of optics in the Soviet Union,” Listopad said. “It is of course very sad that the industry has faded away. However, the ecology is in a much better state now that the factories have closed. A lot of pollution went into the atmosphere and birds would die and fall out of the sky. You can imagine these big monsters. But like in any city, industry is necessary.”

Now the factory district of the city is quiet, broken only by the occasional chug and sputter of a minibus transporting people to and from the optical market.