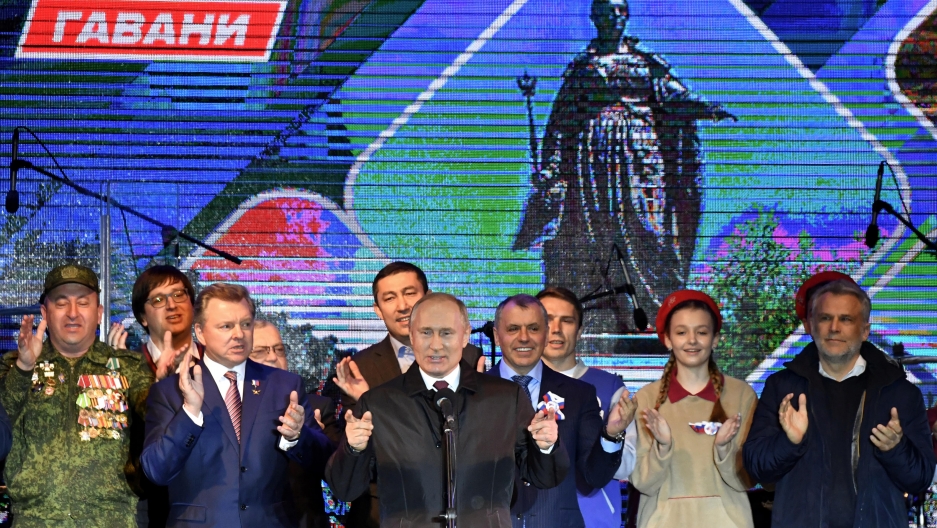 Russian President Vladimir Putin addresses the crowd during a concert marking the fifth anniversary of Russia's annexation of Crimea, in Simferopol, Crimea, March 18, 2019.

March marks the fifth anniversary of Russia’s annexation of the Crimean peninsula on the northern coast of the Black Sea.

The peninsula is still recognized as Ukraine by most of the international community, but Russia insists that Crimea is officially under their jurisdiction.

Russian President Vladimir Putin celebrated the “reunification” of Crimea and Russia by visiting the openings of two new power plants in the embattled territory March 18. 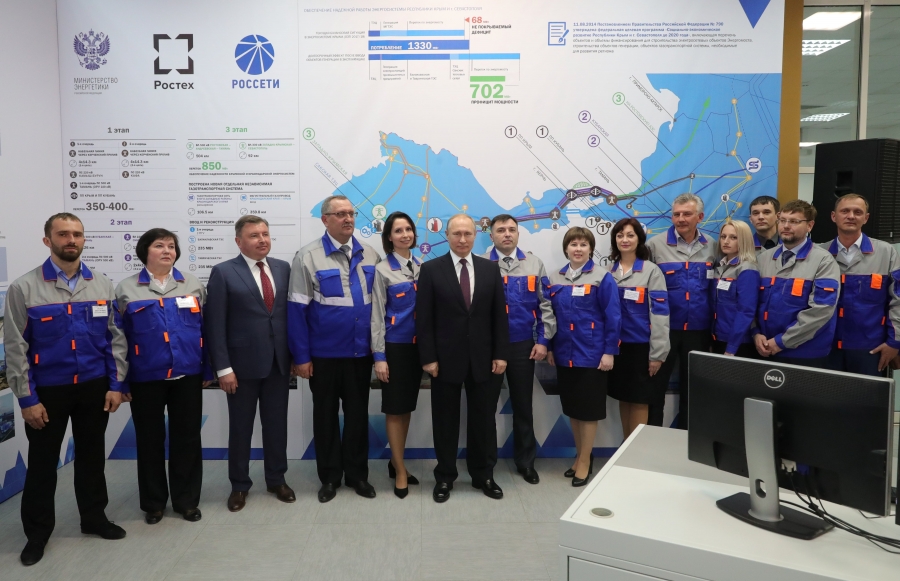 Russian President Vladimir Putin poses with workers during an inauguration ceremony of power stations in the cities of Sevastopol and Simferopol through videolink during his visit to Sevastopol, Crimea, March 18, 2019.

In March 2014, Russia’s “reacquisition” of Crimea operated more like an invasion, depending on who you ask. Now, five years later, Putin appears as comfortable as ever in Crimea, while Ukrainians continue to struggle against Russian domination in the region.

How Crimea was annexed

Toward the end of 2013, many Ukrainians yearned to join NATO as a form of protection from Russia and sign a treaty of association with the European Union. Then-President Viktor Yanukovych, marred by corruption and clear ties to the Kremlin, refused to sign the treaty. 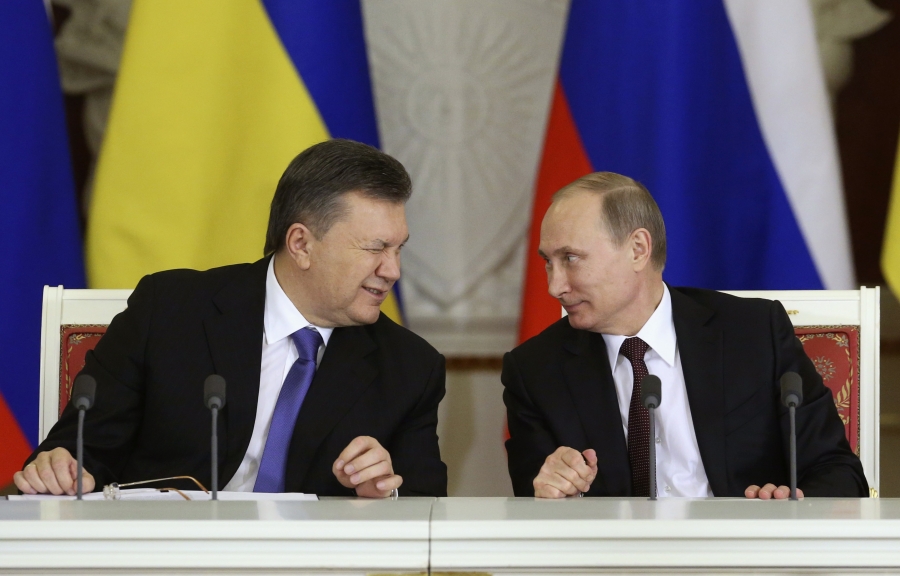 Former Ukrainian President Viktor Yanukovich, left, gives a wink to his Russian counterpart Vladimir Putin during a signing ceremony after a meeting of the Russian-Ukrainian Interstate Commission at the Kremlin in Moscow, Dec.17, 2013.

Student protests erupted into what eventually became a full uprising. Yanukovych’s violent attempts to quell the protests only fueled them further. The Ukrainian government began to crumble as dissent in the capital Kyiv reverberated across the country.

A new revolution in the form of a series of protests — Euromaidan — rallied around stronger democratic values and denounced the corruption of Yanukovych's regime.

A week of bloody riots in February 2014 killed 130 people, and ended with the president’s ouster. 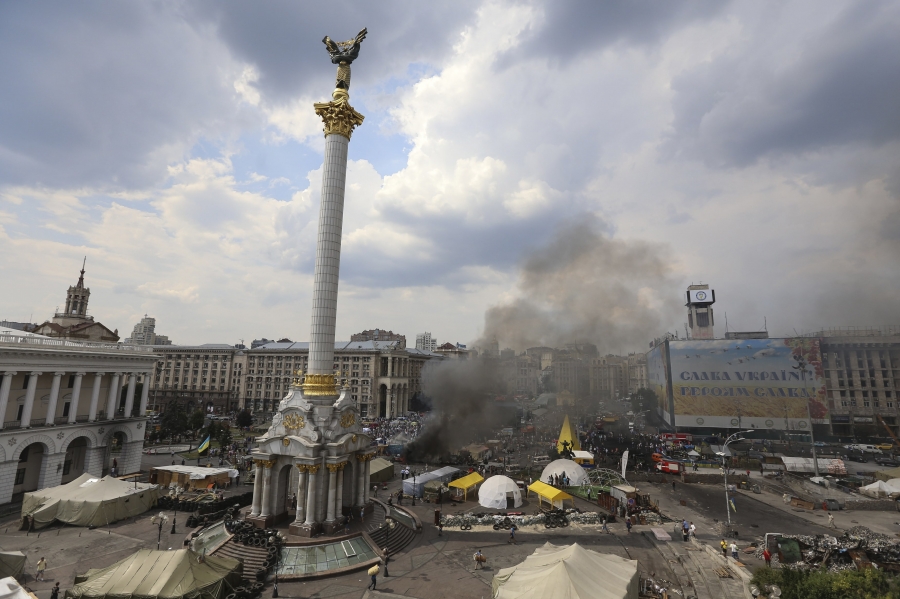 Barricades set on fire by protesters burn at Independence Square in Kyiv Aug. 9, 2014. Tensions continued on Kyiv's Independence Square, the scene of street protests that toppled a Moscow-backed president in February 2014, as protesters still camped there clashed with city workers who tried to clear away their tents.

Around this time, armed, masked soldiers in green uniforms carrying Russian military weapons — referred by the Russian Federation as “little green men” — appeared in Crimea. These soldiers occupied and blockaded the peninsula’s main airport, most military bases in Crimea and the parliament in Simferopol. Russia originally denied the soldiers had any affiliation with the Kremlin, but later acknowledged Russian special forces were involved for “peacekeeping” purposes.

Russia effectively redrew Ukraine’s borders and annexed the Crimean peninsula between February and March of 2014.

Yanukovych has since been charged with treason for his efforts to stop the 2014 uprising and is exiled in Russia. However, some experts say Euromaidan and Yanukovych’s absence following his ouster made the Crimean peninsula more vulnerable to Russia.

The international community, however, still recognizes Crimea as a part of Ukraine. 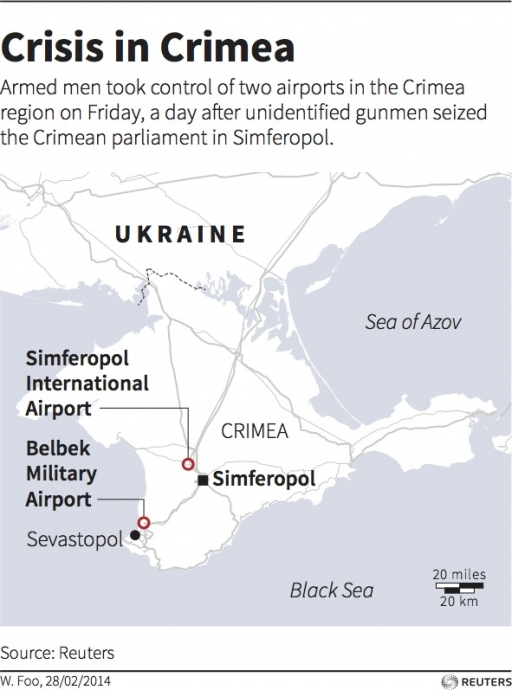 Map of the Crimea region in Ukraine locating the airports that were seized by gunmen in February 2014.

“The Crimean border — so-called border between annexed Crimea and Ukraine — it's non-militarized. On the Ukrainian side you have this temporary border,” said Mikhail Minakov, Kennan Institute senior adviser on Ukraine. “And on the Russian side, there are already buildings, as if they are there forever. Even here you have this symbolic difference in approaches. So, we expect re-integration of Crimea and for [Russia], it's a deal done.”

However, fighting sparked in 2014 is still ongoing in the Donbass region of Eastern Ukraine, north of Crimea, between separatist and Ukrainian government forces.

For Ukrainians, the annexation meant not only a divide of their land but also a seismic, cultural rift between Ukrainians and Russians who have shared a related culture, language and history for centuries. Many parts of Eastern Ukraine are Russian-speaking. While post-Soviet Ukraine has struggled to define a clear break from Russian dominance, including a push to promote Ukraine's official language — Ukrainian — in public and daily life, strong ties remain.

“Back to the USSR, of course, we [Russians] had … the dominant culture, but you cannot call it either Russian or Ukrainian. There is just a Soviet culture,” said Olga Irisova, a political analyst at the Wilson Center and co-founder of Riddle, an online journal of Russian affairs. Irisova, who is Russian, says “both countries, Ukraine and Russia sort of inherited this culture.”

“But in my opinion,” Irisova added, “Ukrainians themselves, they have the same rights to the Russian language as the Russians do.”

Minakov spent most of his life as a Ukrainian citizen who grew up in the eastern part of the country, but says he’s ethnically Russian and Russian-born. Minakov is prohibited from returning to both of his homes — Russia and the conflict zone of Eastern Ukraine — after openly supporting the Euromaidan movement.

“This war is right in my heart."

“This war is right in my heart,” he said, drawing a line with his hand down the center of his chest.

“I think we look at the United States as the biggest ally for Ukraine in all these five years,” Minakov said.

Secretary of State Mike Pompeo recently called on Russia to return Crimea to Ukraine and the Trump administration recently lifted an arms embargo that allows the sales of weapons to Ukraine. But US President Donald Trump himself has remained silent on the issue of Crimea.

“The European Union, Canada and the United States are coordinating the announcement of a few additional sanctions, as well, to mark that we still refuse to accept this claimed annexation by Russia,” Kurt Volker told The World. Volker is the former US ambassador to NATO under the Obama administration and current US Special Representative to Ukraine.

Irisova was not so impressed with the West’s response, however, pointing to the delayed timeline of when the US enacted sanctions against Russia.

“You can see that sanctions became more serious only after the MH17 shot down [by Russia in a rebel-held area of Ukraine]. And then there were two other events that led to sanction extensions: 2016 US elections and when [Sergei and his daughter Yulia] Skripal [were poisoned], ” Irisova said, highlighting that neither factor had anything to do directly with Crimea.

“Sanctions imposed after, mostly in 2018, had a more serious impact [on the] Russian economy.”

Depending on the outcome of the upcoming Ukrainian presidential elections, set for March 31, the country’s relationship with the Kremlin may change. Each frontrunner has some form of a “plan” when it comes to Crimea.

All candidates hope to reintegrate Crimea into Ukraine. More than one candidate has suggested that Russia pay reparations to Ukraine.

But Irisova and Minakov find that “absolutely impossible,” — almost laughable.

“In reality, both the economic and military strength of Russia cannot be compared to Ukraine,” Irisova said. In theory, she says, Ukraine’s military wouldn’t stand a chance.

In response to the notion of Russia paying reparations to Ukraine, Vyacheslav Volodin, chairman of Russia's State Duma, or parliament, said in a speech on March 18 in Crimea, “We will oblige Ukraine to compensate for what Crimea has lost over these 25 years,” referencing the post-Soviet period.

Putin’s approval ratings were low before the annexation of Crimea, but then soared in 2014. Some analysts argue that Crimea was a way to boost his reputation. Putin is seen “as the person who is responsible for the country’s economic development and rising living standards,” Irisova said. 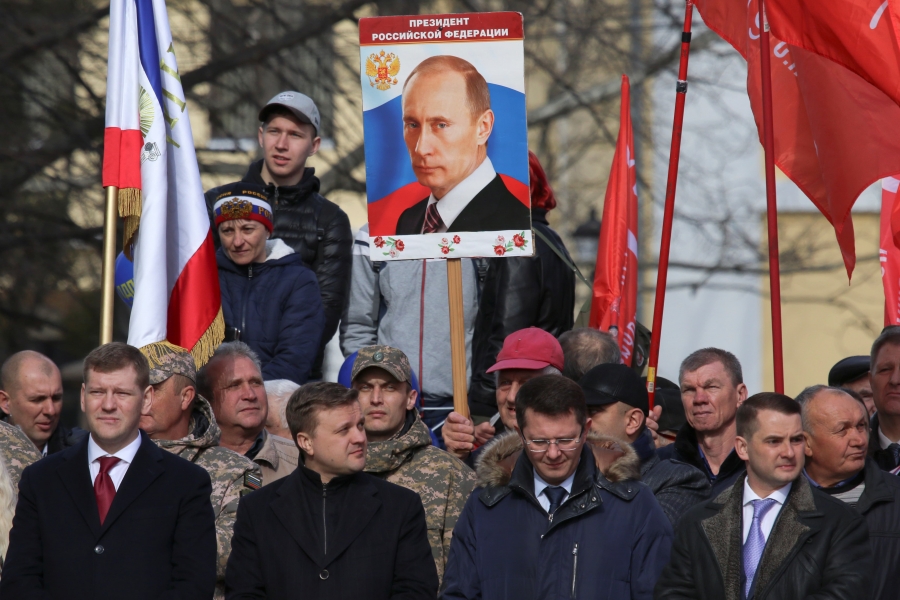 A man holds a board with a portrait of Russian President Vladimir Putin during celebrations of the fifth anniversary of Russia's annexation of Crimea in Simferopol, Crimea March 15, 2019.

When Putin finally executed the Crimea annexation — he was seen by many as a star.

“Russians started to cherish military and international standing and the status of Russia as the global power,” Irisova said. “They consider it to be Putin's main achievement,” referring to the groundswell of Russian approval for the annexation.

But that was only temporary.

Other than the two power plants that opened on Monday, Russia has funded the creation of both a massive bridge connecting Crimea to Russia, as well as a major highway on the peninsula.

“Now we see that euphoria provoked by [the] annexation is gradually disappearing,” Irisova said. “Majority of Russians still approve [of the] annexation. But they don't see this policy as [beneficial to] Russia as previously [believed].”

The Moscow Times reports that sanctions alone have “knocked off about 6 percent of Russia’s economy.”

Only 39 percent of Russian respondents in one survey said that annexation and the war are beneficial for their country, whereas 46 percent believe that the annexation negatively affected Russia's international standing. 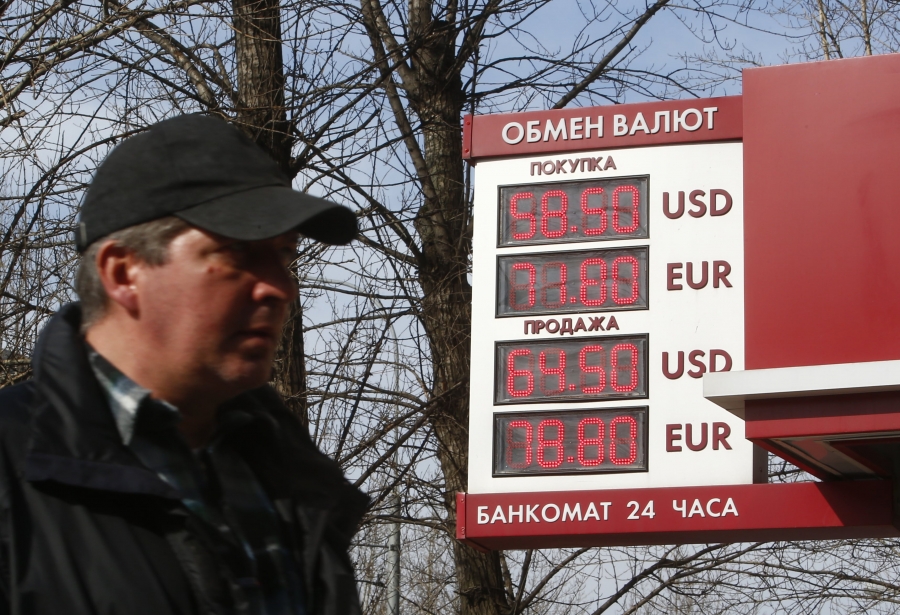 A board with the currency exchange rates of the US dollar and the Euro against the Russian rouble is on display outside a bank branch in Moscow, Russia April 10, 2018.

“The price that Russians pay for the Crimean annexation is quite significant,” Minakov said. “I understand that Russian elites are eager to pay this price but still, without sanctions they literally have no punishment for what they did.”

“There are so many talks about and so many fears that Russia might interfere into [the] Baltic States or some other countries,” Irisova said. “But I would assume that Russia would never go to the NATO countries [...] Because there are potential risks that are too high and the profit itself, questionable.”

Irisova, however, is concerned that Russian expansion elsewhere could be possible due to Western politicians’ conservative approach to foreign policy. That’s because “they believe that Russia has the right to have its own sphere of influence,” Irisova said. “[They believe] we should give [Russia] the right to express power in its backyard.”

“If Russia would have an opportunity to do whatever it wants in its so-called backyard … its hunger might only [increase].”