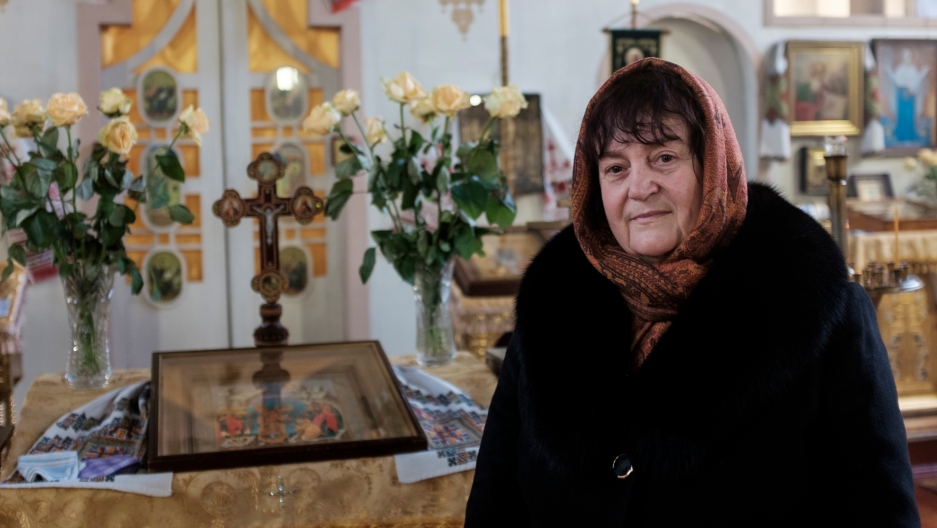 St. John the Theologian Cathedral in Kharkiv is one of the only churches in Ukraine’s second-largest city where churchgoers can hear hymns sung in the Ukrainian language. And for people at this church, Orthodox Christmas services have been especially meaningful this year.

For centuries, the Ukrainian Orthodox Church has been subordinate to Russia’s. But on this year’s Orthodox Christmas Eve, which fell on Jan. 6, the spiritual head of Orthodox Christianity in Istanbul granted official recognition to an independent Ukrainian branch of the church, with a patriarch in Kiev rather than in the Russian capital.

“When we heard the news, we were so happy,” says Olya Tkachenko, who attends this branch of the newly independent church in the city of Kharkiv, where Moscow-affiliated churches greatly outnumber those affiliated with Kiev.

Ukrainian President Petro Poroshenko has made the establishment of a unified, independent church a cornerstone of his legacy. He has lobbied the spiritual head of the world’s Eastern Orthodox Christian community, the Ecumenical Patriarch of Constantinople, to give its blessing in the form of a tomos, a document granting official status to a Ukrainian branch of the church.

Official recognition of an independent Ukrainian church has been seen as a key step in moving the country further away from Moscow’s orbit. But it has also deepened conflict between two countries that have been unofficially at war since 2014, when Russia annexed the Crimean Peninsula and began funneling weapons and fighters into Ukraine’s southeast. Low-level conflict has been a near-daily occurrence ever since, although tensions flared in November when Russian forces cut off Ukraine’s access to the Sea of Azov and seized three Ukrainian warships. In response, the Ukrainian government imposed martial law in regions bordering Russia for 30 days.

Christianity is the dominant religion in Ukraine. Approximately 65 percent of Ukrainians identify as Orthodox Christian, according to a 2016 survey by the Razumkov Center, a Ukrainian think tank. But the Russian Orthodox Church has been vocally opposed to the creation of the new Ukrainian branch. Patriarch Kirill, the head of the Russian church, who is seen as a close ally of Vladimir Putin, has levied complaints with world bodies and broken off relations with the Ecumenical Patriarch in Istanbul in protest.

Last year, Patriarch Bartholomew I of Constantinople, the Ecumenical Patriarch, indicated that he would grant official status to an independent Ukrainian church. In December, the two breakaway Ukrainian churches, as well as several parishes of the Moscow-affiliated church that decided to change their affiliation, held a unification council in Kiev. They elected a patriarch to lead a new, united church. 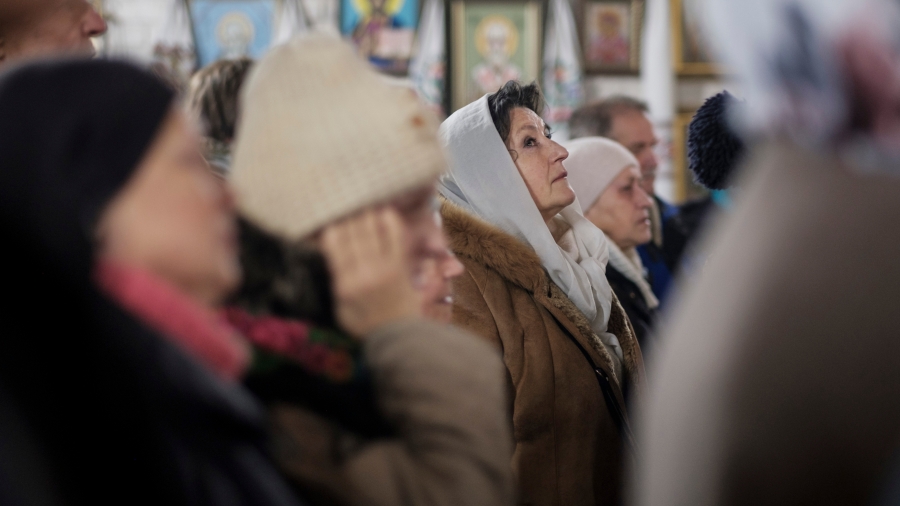 St. John the Theologian Cathedral in Kharkiv is one of the only churches in Ukraine’s second-largest city where churchgoers can hear hymns sung in the Ukrainian language.

Rev. Hennadiy Rokhmaniyko, a priest at St. John the Theologian Cathedral, said official recognition is long overdue. He sees it as an affirmation of independence for Ukraine.

He added that he views the new church as a key element of Ukrainian independence and as a means for the country to develop its national identity. 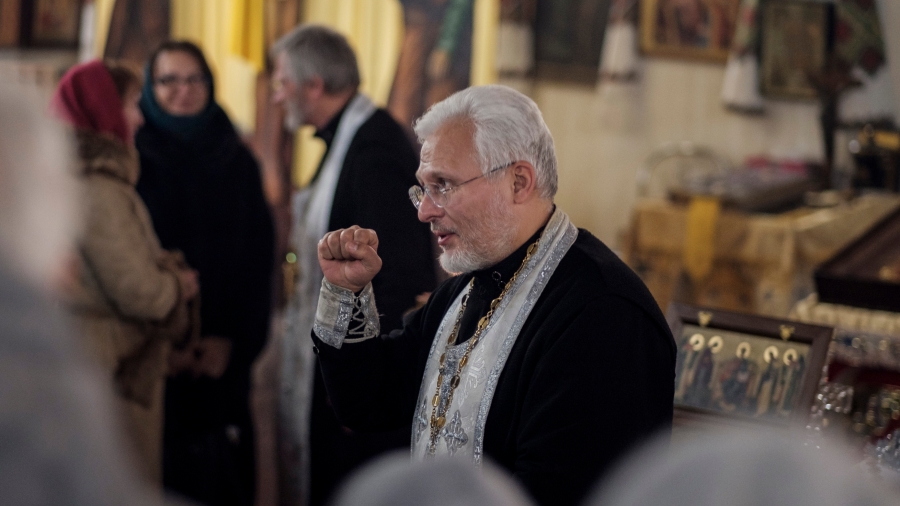 Rev. Hennadiy Rokhmaniyko, a priest at St. John the Theologian Cathedral, said official recognition is long overdue. He sees it as an affirmation of independence for Ukraine. “It is a restoration of historical justice,” he says.

Language policy has played a large role in political discourse. The Ukrainian government has introduced a series of controversial laws requiring the use of Ukrainian in schools and in certain mass media. Supporters say the laws are meant to protect the status of the Ukrainian language and counter the influence of Russian propaganda. Detractors say the laws threaten freedom of speech as well as the rights of other national minorities, including communities of ethnic Hungarians and Romanians on the western border.

Aleksandr Havrilov, a small business owner and father of three who attended Christmas service at the St. John the Theologian Cathedral, said he only began speaking Ukrainian five years ago as the country went through a revolution. He said he sees the official status for the Ukrainian church as an important part of developing Ukraine’s national identity.

“All the events that are happening — fighting the war, receiving recognition of our church — these give us the hope that society is developing, that the Ukrainian people have dignity and that we are a just, independent, nation just like other European countries,” he says.

But a newly independent church does not mean that every Ukrainian parish will pledge allegiance to Kiev. In Kharkiv, just 15 miles from the Russian border, the overwhelming majority of churches will remain affiliated with the patriarch in Moscow. Only four will become part of the newly united, independent Ukrainian church — one formerly affiliated with the Autocephalous church, the smaller of the two breakaway churches, and three associated with the formerly unrecognized Kiev Patriarchate. One more is under construction.

That means that travel can be a burden for residents of this heavily Russian speaking city who want to attend the newly independent, Ukrainian church. Tkachenko said she travels about an hour each way every week to attend the St. John Cathedral, even though there is a Moscow-affiliated church in her neighborhood.

“I don’t live as far away as some people,” she says. “I take a tram, and then a minibus, and then another tram, and then wait for about 15 minutes. Sometimes, I have to walk part of the way.”

According to Ivan Didenko, a civic activist in Kharkiv who joined other civic leaders in lobbying for the establishment of an independent church, it was the right move. As an atheist, he has not attended church in years, but he said that supporting the new church and renaming the Moscow-affiliated branch is a way to dull Russia’s influence in the country.

Survey data backs up Didenko’s claim. A recent study by the sociology department of VN Karazin Kharkiv National University found that nearly half of churchgoers in Kharkiv did not know whether they had attended a Moscow- or Kiev-affiliated church.

According to Didenko, while many Moscow-affiliated churches have remained apolitical, some in the region — especially one particular church in the nearby town of Izyum — have expressed anti-Ukrainian sentiment and stoked separatist attitudes.

“If people want to peacefully worship, let them worship,” Didenko says. “Let them operate as a church. But when political discourse starts growing against the government and the country, then I think there needs to be intervention, and not just by activists but also by the authorities.” 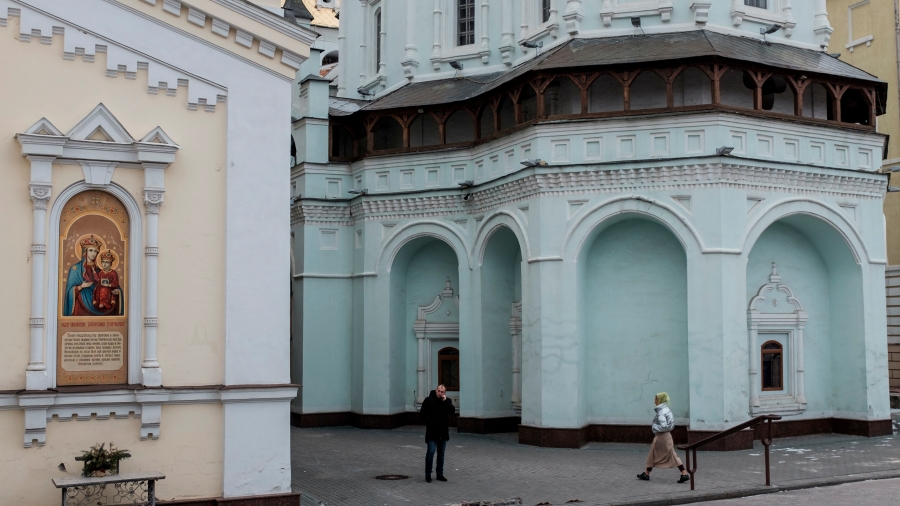 A Moscow-affiliated church is pictured. A newly independent Ukraine church does not mean that every Ukrainian parish will pledge allegiance to Kiev. In Kharkiv, just 15 miles from the Russian border, the overwhelming majority of churches will remain affiliated with the patriarch in Moscow.

The creation of the new church has sparked controversy in Ukraine over the ownership of several holy sites, especially in Kiev, which both Russians and Ukrainians view as the historic birthplace of Orthodox Christianity in Eastern Europe. Ukraine’s security service has raided several churches affiliated with Moscow and questioned high-ranking priests about their allegiances.

The Holy Intercession Monastery is a nearly 400-year-old church complex in the center of Kharkiv that houses the bishop's residence and the regional administrative offices of the Moscow-affiliated church. A spokesman for the monastery said that the Moscow-affiliated branch will continue to be the largest church in Kharkiv. He said he expects no conflict, but declined to comment further.

Standing outside the entrance to the monastery, Raisa Hаvrilovna, a pensioner, said she welcomed the creation of a new, independent church for Ukraine.

“I am a Ukrainian, and I love living in Ukraine,” she says. “I love our land and what is ours. We don’t need anyone else’s church.”

But she added that she doesn’t consider Russians enemies and that the creation of the new church should not make relations between the two nations worsen.

“People in Moscow are also people like us,” she says. “They are Orthodox Christians, just like we are. We have always lived together, and it hasn’t been a problem. We believe in God and will continue to believe in God.”