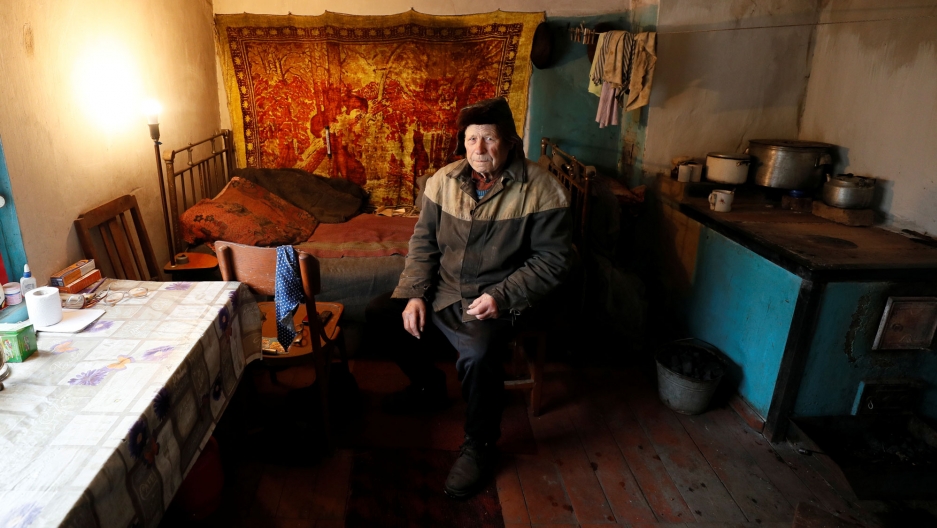 Vitaliy Kudla, 86, sits in his house that was damaged by shelling in the village of Zaitseve, Ukraine.

There are not many people left in Zaitseve, a village on the front line that divides Ukraine, but voters like Galina Soboleva want just one thing from this month's presidential election.

"Whoever promises us peace, to rebuild our homes, we will vote for them. That's all we need," the pensioner said. 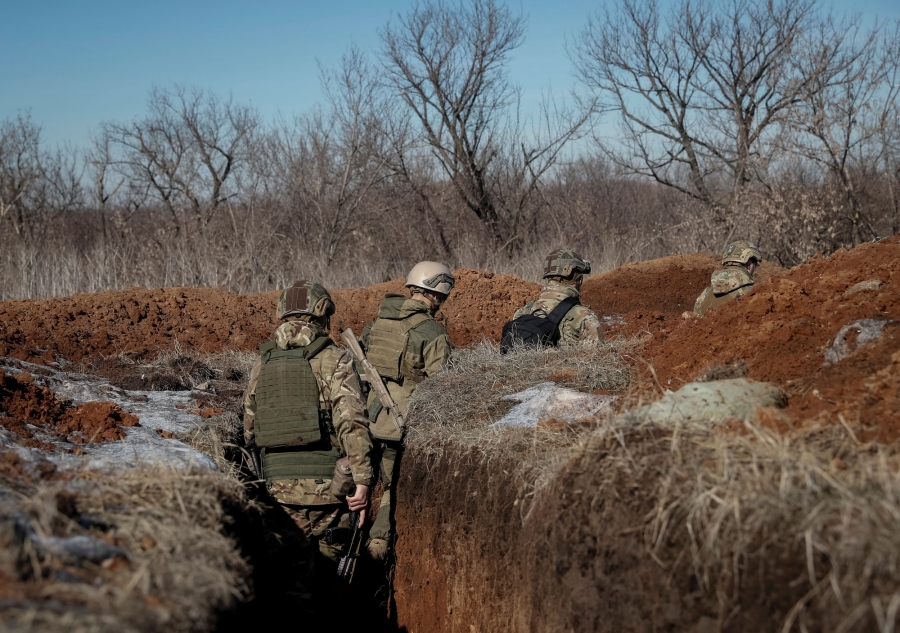 Members of Ukraine's interior ministry's Azov battalion walk at a frontline near the village of Travneve.

Destruction and damage are widespread after five years of conflict over eastern Ukraine between government forces and Russian-backed separatists. Around 13,000 people have been killed, a quarter of them civilians, according to the United Nations Human Rights Monitoring Mission in Ukraine. 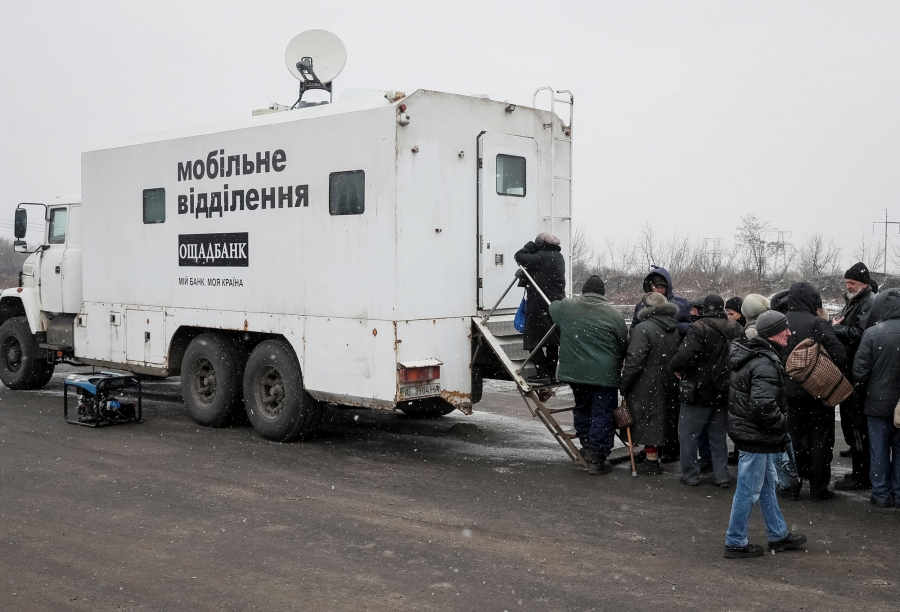 Local residents stand in line to an ATM located in an armored truck after crossing the contact line between pro-Russian rebels and Ukrainian troops near the frontline in Mayorsk.

Troops are stationed in trenches outside Zaitseve and government trucks risk rebel fire to bring bread, coal, firewood and other goods along a dirt road. Employees from the state-run Oschadbank travel by armored truck to a nearby checkpoint, to allow residents on both sides of the conflict to withdraw money.

Some 400 miles away in Kiev, President Petro Poroshenko has made standing up to Russia a central thrust of what has become a tough political battle for reelection. Those planning to take part in the March 31 presidential vote say the conflict is the single biggest issue facing the country but struggle to identify who can best end it. 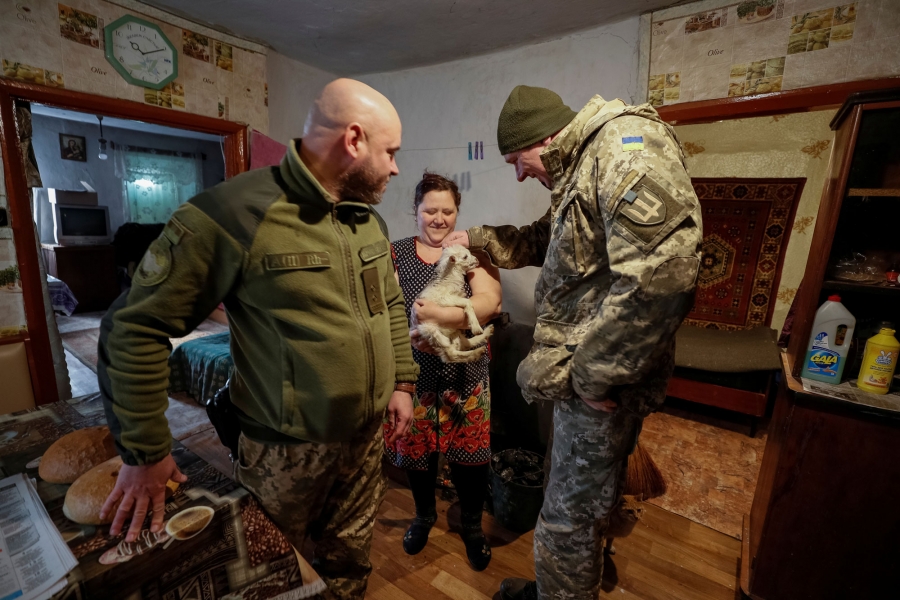 Ukrainian servicemen play with a small goat as they deliver bread to a local resident in the village of Zaitseve.

Zaitseve, in the country's mainly Russian-speaking Donetsk region, was captured by rebels in the early months of the campaign and could not vote in the 2014 election that brought Poroshenko to power. The village was re-taken by government troops in summer 2015 but peace is still elusive.

"We don't see anything yet, no improvements so far. Fighting is going on all the time — yesterday it was really thundering."

In 2014, after the Maidan street protests ousted Kremlin-friendly president Viktor Yanukovich, Russia invaded and annexed the Crimea peninsula. Ukraine says Russia then engineered quasi-separatist uprisings across a belt of eastern Ukraine that escalated into a full-scale conflict. Russia denies doing so. 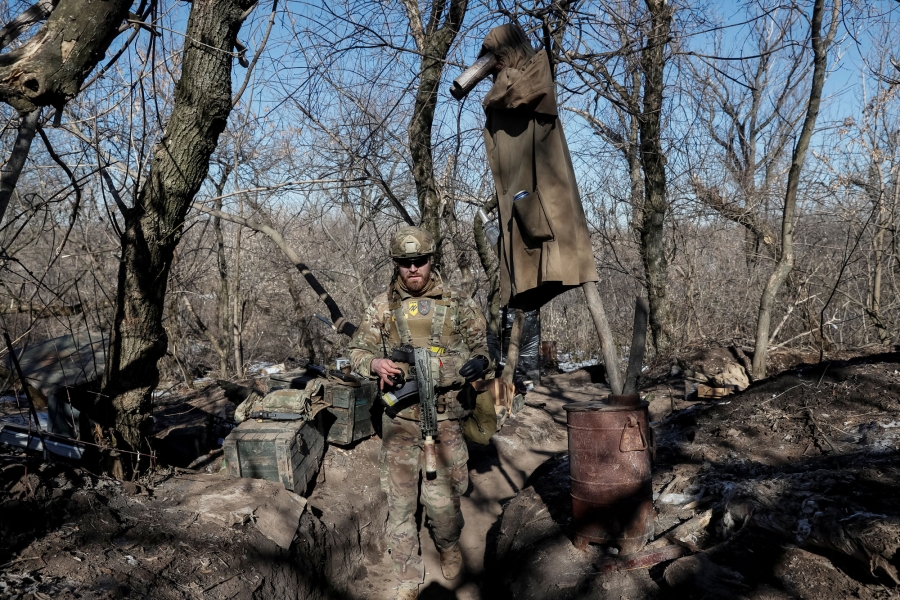 Ilya, a member of Ukraine's interior ministry's Azov battalion, who has lost an eye and an arm, said: "Those who are counting on peace - they will get peace, but on foreign and hostile conditions. And we don't need such peace - too many lives, too much energy, money and time are invested in this war."

Two so-called "People's Republics," unrecognized by either Kiev or Moscow, have formed in the Donetsk and Luhansk industrial regions of eastern Ukraine, known as Donbass.

In Donetsk city, few people are likely to vote, because they would have to cross the front line to register; some of those interviewed said the candidates were as bad as each other.

"They all hate us," said Yulia, declining to give her second name. "Why? Because they lived off our backs," she added in a reference to the region's communist-era industries, many of which have now closed. "Donbass fed them their whole lives and all the time it got worse for us." 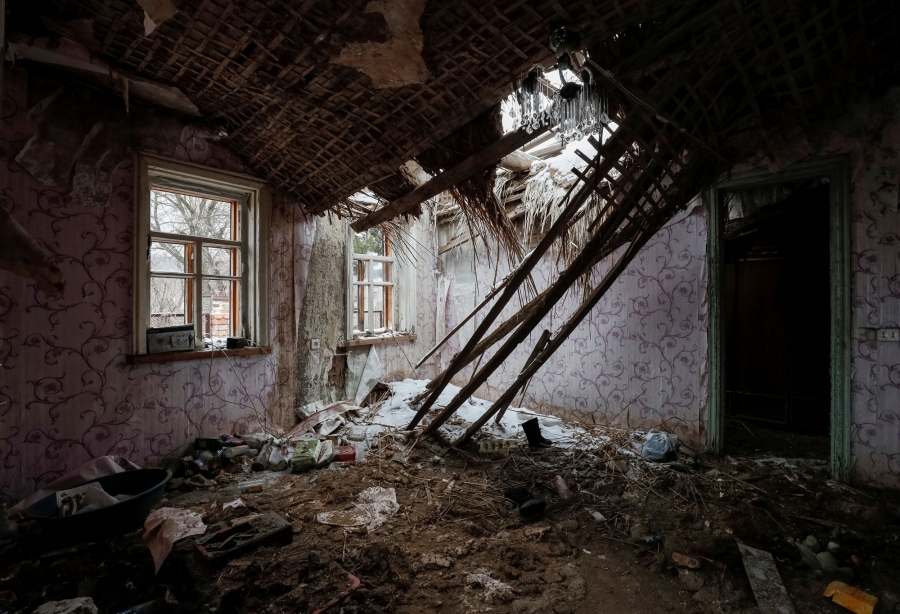 A house damaged by shelling in the village of Zaitseve.

Ukraine, Western countries and NATO accuse Russia of sending troops and heavy weapons to prop up the separatists. Reuters has also documented the involvement of Russian troops and tanks.

Moscow says it only provides political and humanitarian support to rebels and says Russians fighting in Ukraine are volunteers. The Minsk ceasefire agreement in 2015 staunched the worst of the bloodshed but troops continue to die regularly.

Poroshenko's two main rivals — former Prime Minister Yulia Tymoshenko and comic actor Volodymyr Zelenskiy — say they will approach peace talks differently, bringing the United States and other countries to the table. But it is unclear whether they would change the status quo. 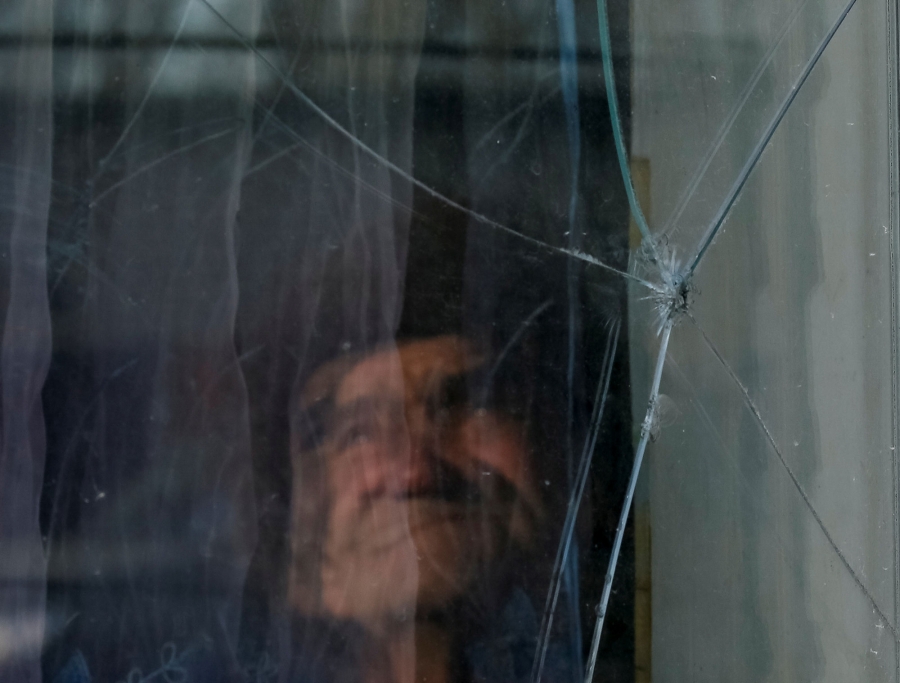 Yushkov looks at an impact of bullet in a window of his house.

Residents in Zaitseve were reluctant to reveal their voting intentions but Zelenskiy, a political novice, leads recent opinion polls of those willing and able to vote in the east.

Some families are divided by the conflict, like that of Nikolai Yushkov, a 70-year-old pensioner living in the nearby village of Mayorsk. While he, his son and daughter live on government-controlled land, another daughter lives under separatist control, where the election is not being held.

"Everyone says: you need to sit down and you need to negotiate," he said. "Peace. We need peace." 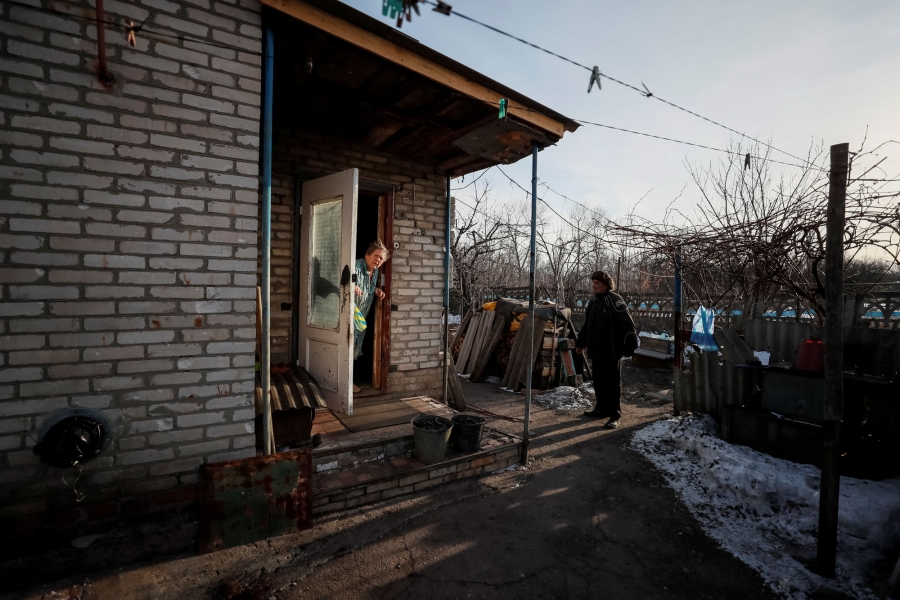 Yushkov speaks with his neighbor.

The single-storey building he shares with another family has survived shelling that destroyed surrounding buildings but is just about 650 years from the separatist trenches. One outer wall, destroyed by fighting, has been replaced by a stack of firewood. 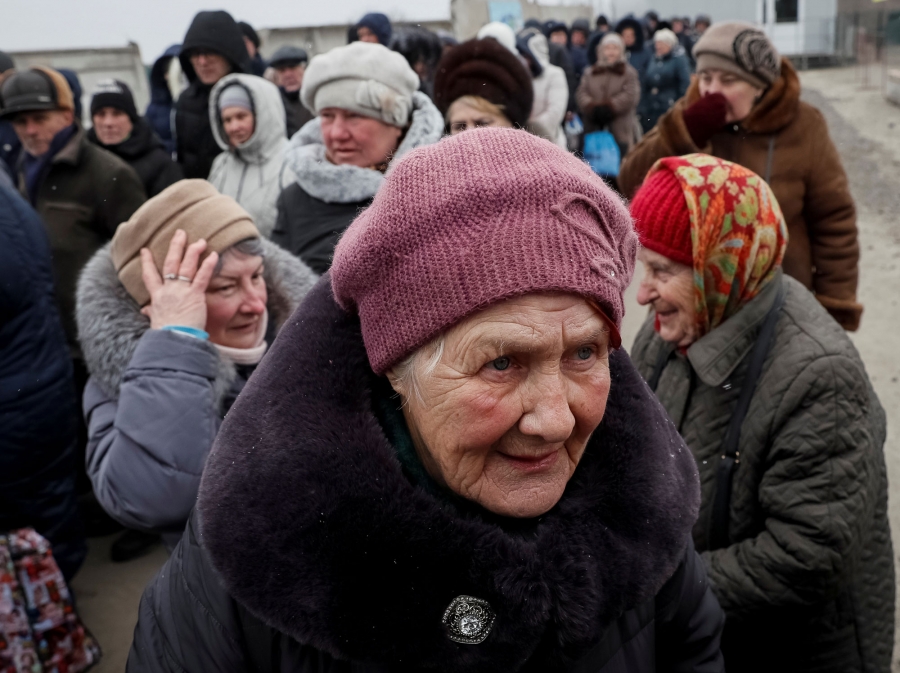 People line up as they wait at passport control after crossing the contact line between pro-Russian rebels and Ukrainian troops.

There are well over a million crossings of the 310 mile contact line every month, many of them by pensioners who spend hours standing in line — in cold, heat, rain or snow — as they rely on state benefits only available on the government-controlled side.

The government and organizations like the United Nations have sought to improve conditions at the checkpoints, providing heated tents, toilets, advice on avoiding landmines, and making border guards wear body cameras to prevent corruption. 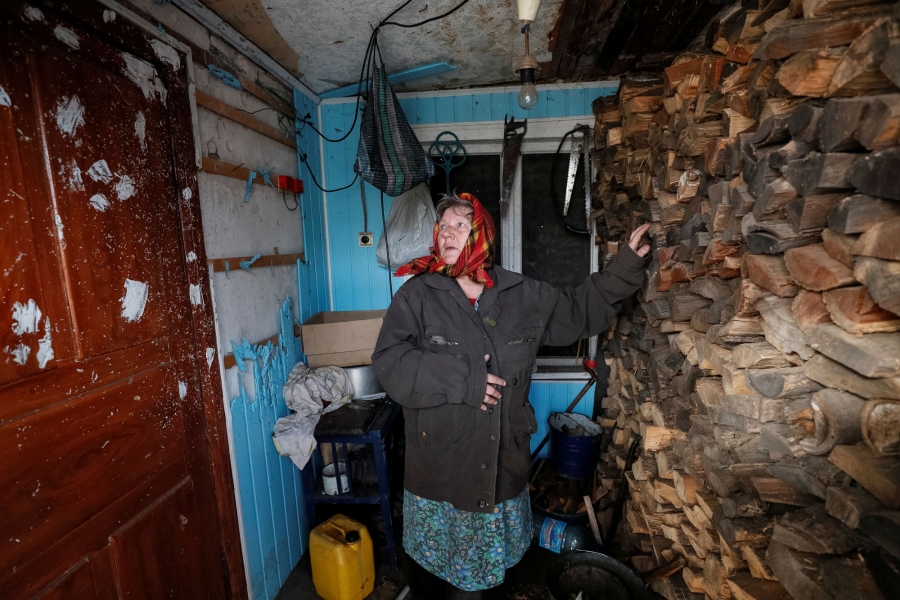 Taranenko looks at bullet holes in door caused by shelling and points at self-made protecting wall made of firewood in her house.

Raisa Taranenko, 73, whose family shares the building with Yushkov, also shared his desire for an end to the war. "But it's not clear how the situation will develop, there is no hope for anything," she said. "Everything is getting worse and worse."

Poroshenko came to power in 2014 promising to end the war within weeks and eventually take Ukraine into NATO. Under his administration spending on defense has been ramped up to 5 percent of gross domestic product from 3 percent in 2013. 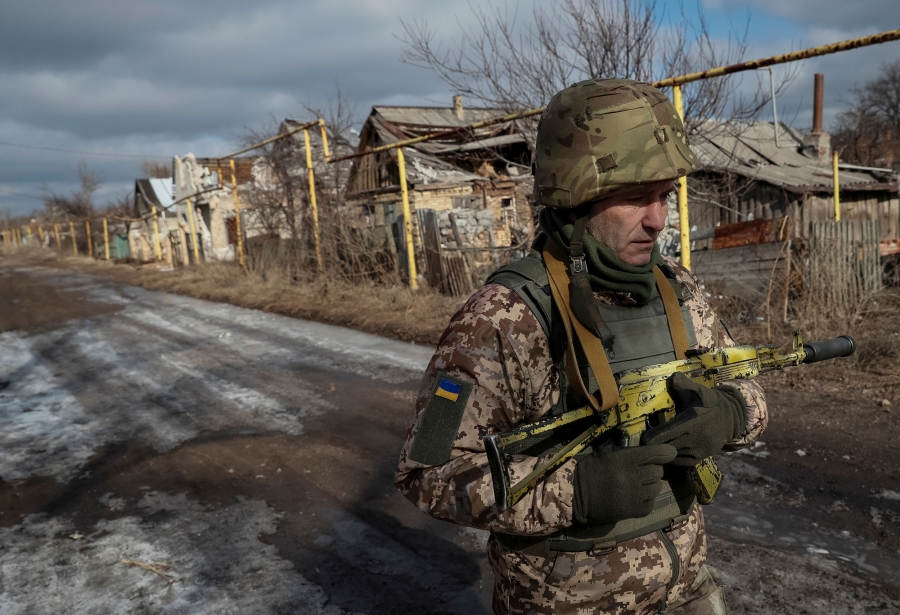 Oleg walks at the front line.

The war is still going on but the army is better equipped and has, under US President Donald Trump's administration, been supplied with Javelin missiles.

For some of the soldiers on the front line, peace is not enough. Oleg, a Lieutenant-Colonel who did not give his last name, said the heavy toll of killed and wounded, both military and civilian, had left just one option:

"Only victory will do," he said. 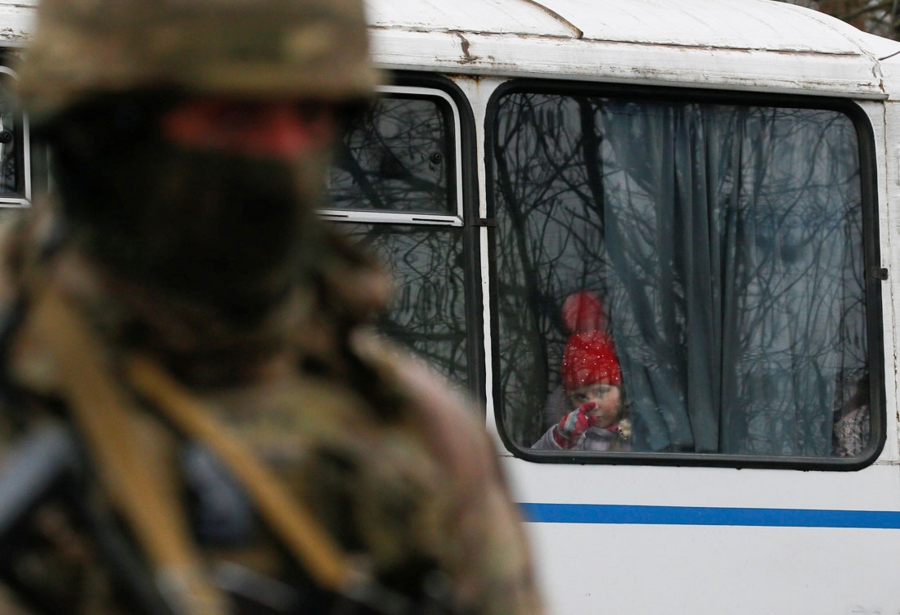 A girl looks out of a bus window which crosses the contact line between pro-Russian rebels and Ukrainian troops as Ukrainian border guard stands by in Mayorsk.