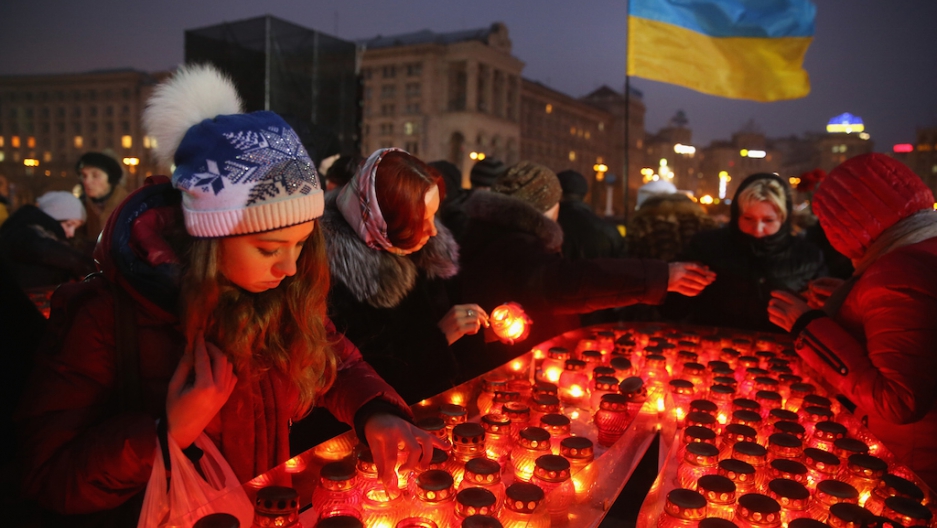 Ukrainians attend an evening commemoration of victims of the uprising one year ago at Maidan square on Friday in Kyiv.
Credit: Sean Gallup
Share

KYIV, Ukraine — When Mykola Kuznetsov and his son were viciously beaten by riot police here last year, a photograph of their bloodied faces — frozen in shock — quickly became a symbol of the pro-democracy protests.

Fast-forward one year, and the 60-year-old professor is wondering whether the revolution is over.

Reform has been delayed. Prosecution of those who killed protesters has been slow. The war effort against Russian-backed insurgents has been plagued by bureaucratic mismanagement.

“I think there’s a large amount of disenchantment in society, because people expected some decisive actions from the government,” Kuznetsov says.

I can't stop returning to this image from #Kiev earlier today. What words were exchanged? Photo by Vlad Sodel/Reuters pic.twitter.com/EcKJemw7ef

A year after a bloody revolution swept former President Viktor Yanukovych from power, plunging Ukraine into a whirlwind of turmoil and war, some are reflecting on just how far the country remains from its goals of transparency and justice.

This week, as Ukraine commemorates the more than 100 people who died in clashes between protesters and police, the focus has turned to what Amnesty International has called a “painfully slow” investigation into the matter.

At the center of the case is also the shooting death of dozens of protesters by unidentified snipers.

All that slaughter, between Feb. 18 and 20, has played a central role in this country's post-revolutionary narrative. The victims are hailed as “heroes” who helped topple a corrupt and predatory regime.

A man cries at the Heavenly Hundred monument set for killed Maidan activists in Kyiv.

Only two former riot police officers face trial for their alleged roles in the shootings. Two low-ranking police officers were jailed for beatings, such as those suffered by Kuznetsov and his son, Ihor.

The former top prosecutor was dismissed last week after months of criticism that he failed to make progress in the investigations.

“The shortfalls and failures of the … investigations has [sic] exposed once again the systemic failures of the existing system, its inability to deliver prompt, effective and impartial investigation into abuses by members of the police and other law enforcement agencies,” Amnesty said in a report released Wednesday.

Newly minted Prosecutor General Viktor Shokin has promised to take fresh aim at the perpetrators, though it’s unclear whether he'll get much further.

More from GlobalPost: Violence in eastern Ukraine seems endless now — here's how we got there

A positive development came this week when authorities apprehended a former party boss accused by critics of sponsoring rebels in war-torn Luhansk, his home region. Alexander Yefremov was a key Yanukovych ally and is widely suspected of having run Luhansk as his personal fiefdom. He's been released on bail and now officials are considering new charges.

Yefremov’s reported request to postpone a Friday court date to honor the victims of the sniper shootings didn't exactly strike many here as genuine.

Also Ukraine’s military defeat this week is fresh in people's minds. It resulted in the loss of the railway hub of Debaltseve and fueled criticism that authorities are obscuring the true nature of the loss.

Military officials apparently played down the casualties and attempted to paint the apparent retreat as a planned withdrawal, despite numerous accounts from soldiers detailing a chaotic and bloody pullout.

The debacle has made some respected fighters angry, such as Semen Semenchenko, a volunteer battalion commander and parliament deputy who claimed the top military brass is purposely deceiving President Poroshenko.

In response, Semenchenko announced the creation of an alternate command center, consisting of other volunteer battalion commanders, to provide the president with true information.

Most experts agree that festering popular discontent may well pose a problem for the authorities in the future.

But Vadim Karasyov, a Kyiv-based political analyst, adds that many Ukrainians are still willing to give the post-revolutionary government the benefit of the doubt.

“This is basically how people reason to themselves: ‘Even though the authorities may be bad, they’re our own,’” he says.

Kuznetsov, the professor whose image shot him to local fame, says the key achievement of last year’s revolution was getting rid of Yanukovych’s “criminal” regime.

Looking back, he insists there were few other options.

“If anyone in the West, or here, thinks that it was possible to change things through elections,” Kuznetsov says, “then this an extraordinarily mistaken point of view.”