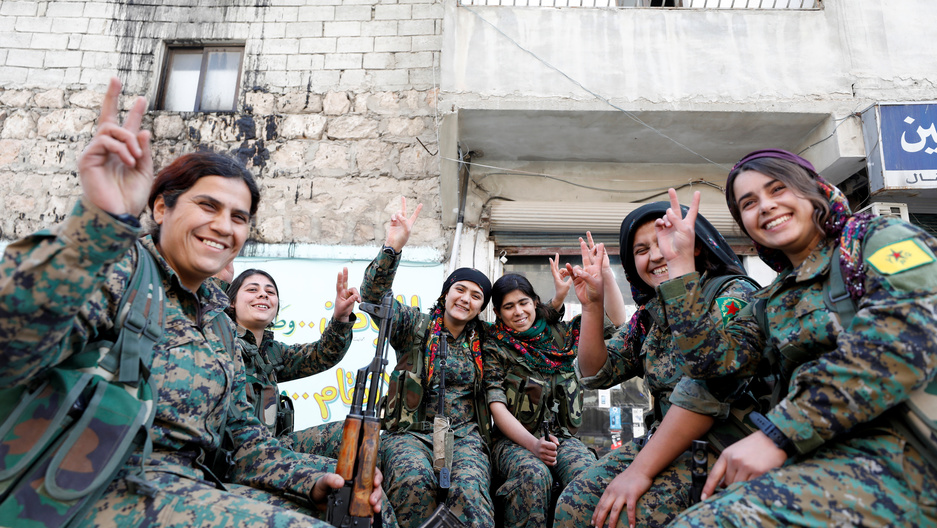 Kurdish female fighters of the Women's Protection Unit (YPJ) gesture in the Sheikh Maksoud neighbourhood of Aleppo, Syria, on Feb. 7, 2018.

For Syria's Kurds, US President Donald Trump's announcement that US troops would pull out of northeastern Syria felt like a betrayal. It echoed past instances where the ethnic group has been abandoned by the United States and other Western allies.

Kurdish people have been involved with the US since at least the first Gulf War in 1991. Kurdish-led forces in Syria have helped the United States fight ISIS for the past four years.

At least 20 million Kurds reside in a region that spans Turkey, Iraq, Iran and Syria. They were split up by national borders created in the aftermath of World War I, even though a treaty ending the war had promised them their own country. They never got it — and various Kurdish groups have been fighting for autonomy within their respective countries ever since. They've formed alliances with other international powers, including the US, when doing so aligned with their military interests.

But the United States' planned pullout could expose them to an attack by Turkey, their opponent.

Shivan Fazil is a Kurd, as well as a scholar and political analyst based in Erbil, the Kurdish region of Iraq. He spoke to The World's host Marco Werman about Kurdish identity and aspirations.

Related: US pullout could bring 'another rise of ISIS,' researcher says

Marco Werman: Shivan, I always like to start with how people communicate. Tell us the difference between Kurdish and Arabic.

Shivan Fazil: There is a big difference in terms of the words and the pronunciation of the words. The script of Kurdish language is almost as Iranian and Arabic script or letters, but they have some six to eight more additional letters.

Gotcha. So let's talk about the actual borders that separate the Kurdish-speaking people. How real are those borders? Are they so hard that cousins can't meet cousins?

No, cousins can and do meet cousins. Obviously when there is a war, when there is a conflict ongoing, it becomes more difficult. There is an imaginary Kurdistan, if we are going to be very frank, which is the great Kurdistan that basically encompasses the Kurdish parts of the four dominant countries that you just referred to. But in reality, there are four different contexts in which the Kurds actually live in the current day. People have a transnational, basically, affiliation identity and groupings for the Kurds in the southeast of Turkey, the Kurds in west of Iran, and also Kurds in the northeast of Syria. But at the same time, they are very realistic about the geopolitical makeup of the current Middle East that we are living in.

So you say imaginary Kurdistan, and that's crucial, I think, because Kurds have never had their own country. Why is that?

Well, it basically goes back to two infamous treaties in the breakup of the Ottoman Empire. These treaties are the Treaty of Sèvres and the Treaty of Lausanne.

So we're talking about the end of World War I here.

Yes, World War I — basically when the Ottoman Empire was collapsed, in the first treaty there was a promise to the Kurds that they will also get their own nation-state. But that treaty was a few years later overruled by a second treaty. And the Kurds lost that guarantee because they were never part of these discussions and negotiations that basically led to the present geographical makeup of the Middle East.

It is hard to imagine any of the countries with Kurdish populations ever allowing the Kurds to break away and form their own country. So tell us what the Kurds want. What are their aspirations?

While the aspiration of every Kurd is to be able to exercise their cultural identity, and that obviously includes education in their mother tongue, being Kurdish and a degree of autonomy or self-rule and self-governance, which is basically what the struggles and sufferings of all these parts of Kurdistan have in common. The aspirations that Kurds in Turkey and in Syria and Iran have, at least, at this moment, are aspiring to be able to speak their mother tongue and educate their kids and themselves in their mother tongue and to exercise a degree of self-governance.