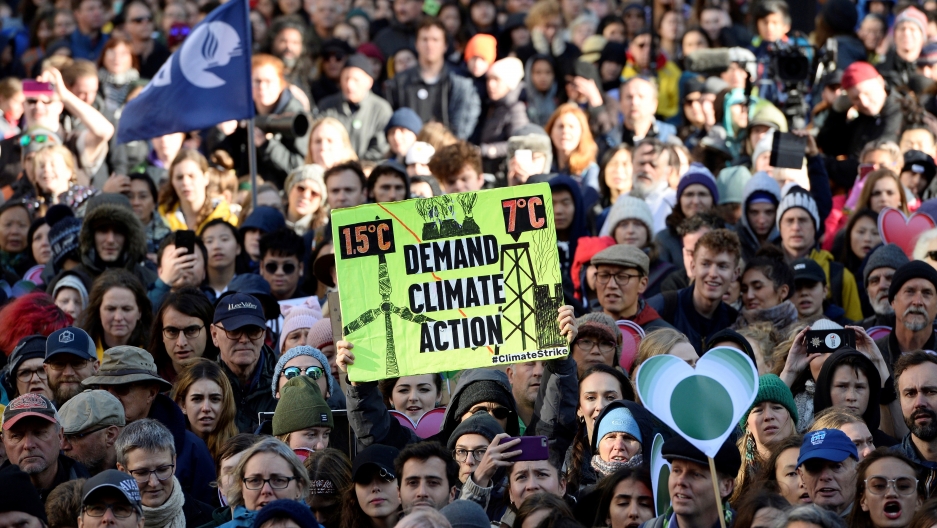 On Monday, the White House is likely to be one step closer to delivering on a major campaign promise of removing the United States from the 2015 Paris climate change accord.

In June 2017, just five months after taking office, President Donald Trump announced that he intended to remove the US from the global compact that rallied world countries around the goal of limiting global warming to below 2 degrees Celsius.

Trump announced in a Rose Garden speech that the country would “cease all implementation” of the Paris accord and the “draconian financial and economic burdens the agreement imposes on our country.”

Trump repeated his disapproval of the pact just last week at a shale oil and gas conference in Pittsburgh.

Related: You’re not being fleeced: This carbon-negative sweater comes with sheep included

“I withdrew the United States from the terrible, one-sided Paris climate accord,” he said to applause from the crowd. “It was a total disaster for our country.”

But despite those speeches, the US has not actually withdrawn from the pact yet.

“The United States is still what’s referred to as a ‘party’ to the agreement.”

“The United States is still what’s referred to as a ‘party’ to the agreement,” said David Waskow, a climate policy expert at the nonprofit World Resources Institute.

Since Trump’s 2017 speech, the United States has sent delegations to the annual UN climate summit, or Conference of the Parties, each year.

“They’ve continued to be extremely engaged in the negotiations,” Waskow said.

Related: How did teen climate activist Greta Thunberg rise to fame so quickly?

The US and China over the past few years even co-led negotiations on processes for the disclosure of carbon emissions and transparency under the agreement.

The US has remained a party to the Paris accord because of a “cooling off” period written into the pact, stating that no country can leave it for three years after it goes into force.

“So, the first date that the president can send a letter withdrawing the United States is Nov. 4, 2019,” Waskow said.

But even then, the US won’t be out. Full withdrawal takes a year.

That means the US can’t finally and officially be out of the Paris Agreement until Nov. 4, 2020, the day after the US presidential election.

“The irony here would be that the withdraw from the Paris Agreement could take effect after an election result that might suggest a new administration that would move in a different direction, so there is certainly some potential irony there.”

“The irony here would be that the withdraw from the Paris Agreement could take effect after an election result that might suggest a new administration that would move in a different direction,” Waskow said, “so there is certainly some potential irony there.”

All of the Democratic presidential candidates have said they would rejoin the Paris Agreement if they’re elected.

There is precedent for the US rejoining international organizations that it’s removed itself from before. One example is UNESCO, the UN cultural organization.

Longtime former State Department lawyer Sue Biniaz says that technically, rejoining the Paris Agreement would be easy enough to do.

“The US could rejoin on day one [of a new administration], and several candidates have said that would be their intention,” said Biniaz. “And we would become a party again 30 days later, according to the terms of the Paris Agreement.”

The tricky thing, in Biniaz’s view, would be setting a new carbon-cutting goal. Right now, the US is on track to cut carbon by 2025 only by about half as much as it promised in the Paris Agreement. And if the US does rejoin the pact, it would have to set a new carbon target right away. (Other countries in the Paris Agreement are expected to deliver new targets by the UN summit in Glasgow, Scotland, in December of 2020.)

“It’s going to have to be a bit of a Goldilocks target,” Biniaz said, “because if it’s too stringent, I don’t think we’ll have credibility. But if it’s too unambitious, too realistic in a way, that could be kind of a downer. So, exactly how you figure out what that target is, I think will be an interesting challenge.”

If Trump wins a second term next November, the future of the Paris accord will look quite different than if a Democratic challenger lands in the White House.

The US would almost certainly stay out of the agreement, which means it will no longer have a seat at the negotiating table during UN climate meetings.

Jennifer Tollmann, a policy adviser for climate diplomacy at the climate and energy think tank E3G in Berlin, says four more years outside of the Paris Agreement would further isolate the US from the global community.

“Diplomatically, what it means is that the US is seen as an unreliable ally and an irresponsible leader.”

“Diplomatically, what it means is that the US is seen as an unreliable ally and an irresponsible leader,” Tollmann said.

If the US remains outside the climate pact, other countries will need to cut emissions more, and faster. Otherwise, the Paris Agreement’s already ambitious goals would grow farther out of reach.

“The pressure does then fall particularly on the EU, and they are very aware of that,” Tollmann said.

Related: This summer, Canada’s land of ice was on fire

It’s not just the European Union. A lot of focus is also on China, the world’s largest emitter.

The US and China once cooperated on climate change, paving the way for the Paris Agreement to become a reality, but the two powers are in a trade war now. Climate policy experts are watching to see if China's resolve to fight climate change weakens as a result of its deteriorating relationship with the US.

Another open question: Which country, or countries, will take the lead on pushing for more action on climate change while the US federal government sits on the sidelines?

“Really getting those other major polluters to step up is going to be crucial in the next period,” Tollmann said. “Because at the end of the day, you don’t negotiate with nature.”