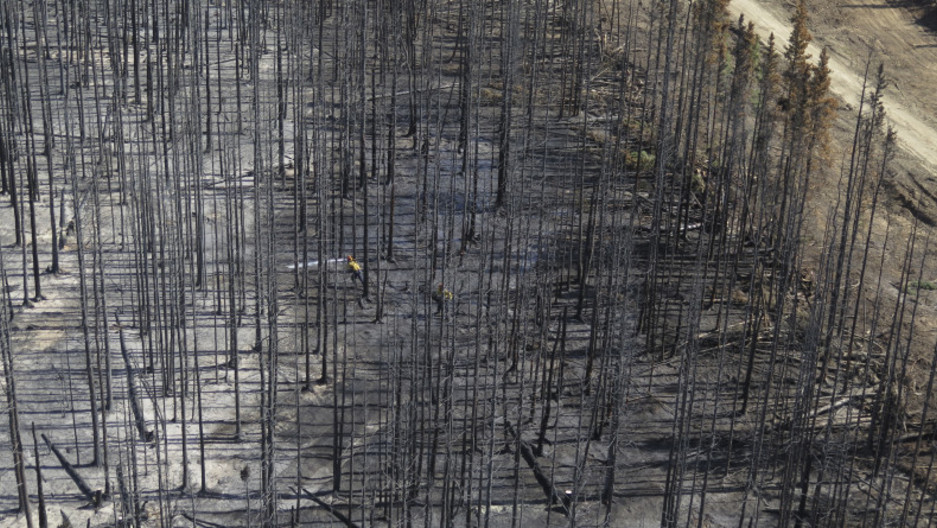 Firefighters at work in a stretch of scorched trees in Bear Creek, Southwest Yukon.

Chad Thomas started fighting wildﬁres at 16, sacriﬁcing every summer since battling the blazes that claim ever-growing tracts of the Yukon’s boreal forest and peatlands.

As a young ﬁreﬁghter from the village of Teslin, he’s required to jump out of helicopters to fend off flames in the most remote regions of the country, and he took pride until recently in never allowing a structure to become ashes.

Related: Are the Amazon fires a crime against humanity?

But he’s a key observer of a changing environment. Wildﬁre season in the territory is beginning earlier; the ﬁres are hotter and move faster. Seasonal combustion is natural to the North, but scientists say there’s a reason for the newfound ferocity of northern ﬁres: a warming Arctic.

“I had friends’ homes burn. There was nothing I could do.”

For ﬁreﬁghters like Thomas, this means confronting unwinnable scenarios. He was on the ground in Telegraph Creek, British Columbia, last year, when wildﬁres ravaged 21 homes and left the community under an evacuation order for 102 days. Telegraph Creek includes the Tahltan First Nation, of which Thomas is a member, so the ﬁre hit close to home. “I had friends’ homes burn,” he says. “There was nothing I could do.”

Now 31, he is the CEO of Yukon First Nations Wildﬁre, a ﬁreﬁghting service that draws from eight Indigenous governments across the territory. This season was the organization’s ﬁrst on the ground, with 80 trained ﬁreﬁghters. At the time of this writing, there had been 111 wildﬁres in the Yukon in 2019, and 44 were still active. The total hectares burned — 252,902 — is nearly 50% more than the territory’s 10-year average. “There’s a very healthy sense of fear,” says Thomas, “not just in First Nations but among all members of the North.”

Hundreds of wildﬁres, some visible from space, swept across the Arctic Circle this summer — a rare event scientists link to the breathtaking pace with which the region is heating up. The circumpolar zone is warming three times faster than the rest of the world, and 2019 brought its hottest summer on record, fuelling ﬁres whose carbon output will speed the disastrous climate cycle.

Arctic ﬁres throughout June in Alaska, Canada, Greenland and Russia emitted 79 megatons of carbon dioxide into the atmosphere, according to the European Union’s Copernicus Atmosphere Monitoring Service (CAMS) — more than the entire annual emissions of the nation of Sweden. “It’s quite unusual to see so many focused in particular parts of the Arctic Circle, and that they last for such a long period of time,” says Mark Parrington, a climate scientist at CAMS.

Mike Flannigan, a professor in the University of Alberta’s renewable resources department and director of the Canada Wildfires, says three ingredients go into making a wildﬁre: fuel, ignition (in this case, usually lightning) and, most importantly, weather that is warm, dry and windy. Weather, he says, influences the other two. More worrying still is what’s being burned. Peat is a thick, organic material found within and above the Arctic treeline that has been storing and accumulating carbon over millennia.

“The warmer it gets the more ﬁre we see; more ﬁre means more greenhouse gases, which makes it even warmer.”

Related: 'It is a form of injustice': Caribbean island nations struggle against rising seas

Yukon ofﬁcials have no choice but to adapt. At a meeting of the Arctic Council in August, a representative of Gwich’in peoples in the Yukon, the Northwest Territories and Alaska warned that “terrible air quality” is threatening people’s health and making their lives miserable. Wildﬁres in Alaska have devastated an area larger than the one that ﬁres left behind in California last year.

“Every community here feels close to wildﬁre. In the past, if we talked about cutting down trees, we would be bound to hit some resistance.”

This year, once again, a handful of Yukon ﬁres have made the previously uncommon transit across the Arctic Circle, but the threat to property and people has been greater in the subarctic part of the territory. Residents of Keno City, a mining town 464 kilometers north of Whitehorse, were at risk of being evacuated in July. “Every community here feels close to wildﬁre,” says MLA John Streicker, the Yukon’s minister of community services. “In the past, if we talked about cutting down trees, we would be bound to hit some resistance.”

Now, when Streicker attends town halls, he’s met by locals urging him to move the dial on prevention and addressing climate change, even if it means levelling some forest.

Wildﬁres are typically left to burn if they are not a threat to local society, but the territorial government is preparing for when ﬁres inevitably put communities at risk, devising evacuation plans, thinning out the fuel around towns and villages, and conducting prescribed burns.

Few take comfort knowing this year’s ﬁre total is not enormously high — not, at least, by recent standards. Last year saw 67 ﬁres burn 86,000 hectares. But, the year before, 115 scorched 471,000 hectares — the most in a decade. Damien Burns, the territory’s director of wildﬁre management, says the ﬁres that do start are burning “hotter, deeper, and they’re a little harder to suppress.” Even when snow covers the ground, ﬁres can smolder in the peat throughout winter.

Thomas, for one, has felt plenty busy, and says more ﬁreﬁghters are needed in the Arctic. His organization has drawn interest from communities in British Columbia, Alberta and Alaska, where big, long-lasting ﬁres have become part of life. Thomas believes Indigenous people, as stewards of the land, will play an essential role in the ﬁght against them. “Nobody really knows where these ﬁres are going to start next,” he says. “All we can do is train our folks to the best of our ability, and be prepared when that call does come.”

This story originally appeared in Maclean's. It is republished here as part of The World's partnership with Covering Climate Now, a global collaboration of more than 250 news outlets to strengthen coverage of the climate story.