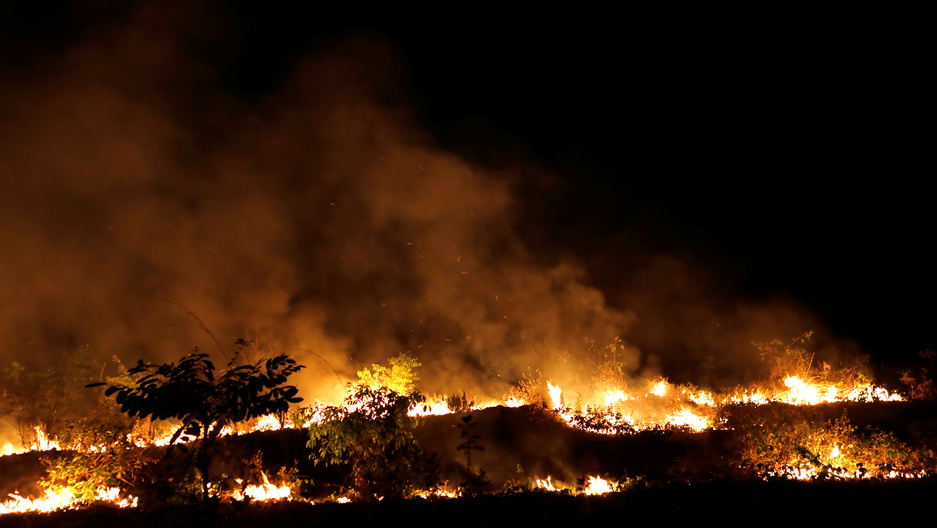 The fires raging in the Amazon have drawn attention to the alarming speed of deforestation in one of the most biodiverse places on Earth, along with urgent warnings from scientists that a “tipping point” could be near, putting the rainforest at risk of gradually turning into dry savanna.

Tropical zone farmers around the world often burn parts of the rainforest to clear the land and boost soil fertility. But it’s a temporary fix, as the soil is quickly exhausted. So, to keep farming, they have to keep burning deeper and deeper into the forest.

Natural fires in the Amazon are quite rare, says Carlos Nobre, a senior researcher at the University of São Paulo, so when the Amazon experiences so many fires, it is clear they have been set purposely, mostly to expand agricultural frontier into the forest.

In case there was any doubt, Brazils’s recently-elected President Jair Bolsonaro nicknamed himself Captain Chainsaw to “illustrate his views on the way we should proceed with development in the Amazon,” Nobre notes.

“[Bolsonaro] does not believe the Indigenous territories should be kept the way they are. ... He believes they should be transformed into big cattle ranches or opened up to mining. His views represent just a minority of people, which really do not have much power, except they are very closely allied with the conservative agribusiness.”

“He does not believe the Indigenous territories should be kept the way they are,” Nobre says. “He believes they should be transformed into big cattle ranches or opened up to mining. His views represent just a minority of people, which really do not have much power, except they are very closely allied with the conservative agribusiness.”

Recent opinion polls show that 90% of Brazilians are against Amazon deforestation, Nobre points out. “Brazilians really care about the Amazon — not just for today, but forever,” he says.

As a natural carbon sink, the Amazon removes up to 2 billion tons of carbon dioxide from the atmosphere every year, about 5% of total emissions caused by human activity, Nobre explains. Without the Amazon, the planet would be warming faster than scientists already observe. “If we lose most of this carbon stored in the vegetation, we are not going to meet the targets of the Paris accord of 2 degrees Celsius maximum warming, or preferably 1.5 degrees Celsius,” Nobre says.

The Amazon’s contribution to the hydrology of the region gets less attention than the carbon issue, but it is equally important to the long-term health of South America and the planet.

“Tropical forests are the most efficient biome to recycle water,” Nobre explains. “Many studies indicate that without the forest, the overall rainfall in the Amazon would be something like 25% less. If the rainfall is less, most of the forest will become a dry savanna.”

The irony, of course, is that as the forest continues to be degraded in order to benefit agriculture, the inevitable changes in rainfall patterns will make growing crops and raising cattle more difficult. The lack of rainfall will also affect other agricultural regions in South America and even the southern United States, as well.

This warmer air will travel southward and reach central Brazil’s agricultural areas. Because Brazil is already so hot, agriculture is almost at the limit of the temperatures it can tolerate, Nobre says. An increase of 2 degrees Celsius will put tremendous strain on farmers and ranchers there.

All of this together adds up to a scenario scientists refer to as the “tipping point.” Nobre and his colleagues have been working on this issue for decades, and they have concluded that because the three main drivers of forest degradation — deforestation, climate change and increased vulnerability to fire — are acting upon the forest simultaneously, deforestation of the Amazon must not exceed 20% to 25% of the forest. If deforestation crosses this threshold, 60% of the forest will, over a handful of decades, turn into dry savanna.

“We are currently at something like 15 to 17% deforestation in the whole basin. ... So, we are not that far [from the tipping point] under the current rates of deforestation. This is something [that will happen] between 20-30 years into the future — very, very close to the present.”

“We are currently at something like 15% to 17% deforestation in the whole basin,” Nobre explains. “So, we are not that far [from the tipping point] under the current rates of deforestation. This is something [that will happen] between 20-30 years into the future — very, very close to the present.”

If this happens, tens of thousands of species endemic to the Amazon will go extinct and enormous amounts of carbon will be lost. And because dry savanna stores about a third less carbon than a tropical forest, the Amazon’s capacity to act as a carbon sink will drop dramatically, which means more carbon dioxide will remain in the atmosphere.

Much of this is avoidable, Nobre insists.

Nobre believes working from these fronts, rather than expecting producers and agribusiness to be responsible on their own is the only real solution. “They have to be forced to do it by the market,” he says. “[O]ne should [also] be careful expecting governments to take all these actions. They are probably not going to take those actions in the short run.”