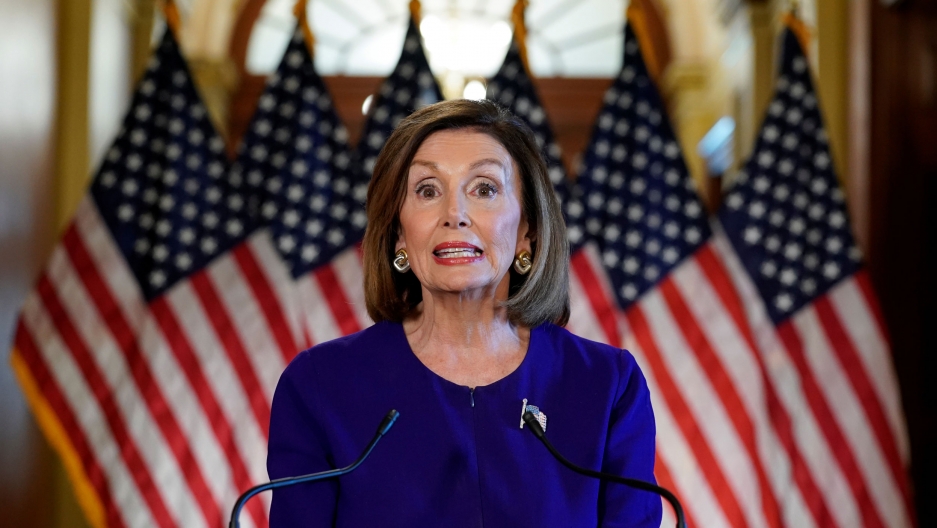 House Speaker Nancy Pelosi (D-CA) announces the House of Representatives will launch an inquiry to investigate whether to impeach US President Donald Trump following a closed House Democratic caucus meeting at the US Capitol in Washington, DC, Sept. 24, 2019. On Oct. 29, House lawmakers introduced a resolution to reaffirm the inquiry, which will come to a vote Oct. 31.

On Thursday, the US House of Representatives will vote on a resolution to formalize the impeachment inquiry into President Donald Trump. A vote in the House will set rules for opening hearings to the public and releasing deposition transcripts as well as due process rights for the president.

The draft resolution is the next step in the investigation — after the inquiry is concluded, the House Judiciary will decide whether to recommend articles of impeachment.

Republicans have criticized House leadership for holding impeachment testimony behind closed doors, going so far as to stage a “sit-in” and delaying testimony last week. The White House has also called the impeachment inquiry “illegitimate.” The resolution to make the continued investigation more transparent undercuts these arguments.

In a letter to Democratic colleagues on Monday, House Speaker Nancy Pelosi said the arguments of Trump and his allies are “baseless.”

“They argue that, because the House has not taken a vote, they may simply pretend the impeachment inquiry does not exist. Of course, this argument has no merit,” Pelosi wrote, adding, “The Trump administration has made up this argument — apparently out of whole cloth — in order to justify its unprecedented cover-up, withhold key documents from multiple federal agencies, prevent critical witnesses from cooperating, and defy duly authorized subpoenas.”

Charles Kupperman, former deputy national security adviser, who was subpoenaed to testify Monday, did not appear after the White House invoked “constitutional immunity.”

On the call, Trump asked Ukraine's new president to investigate Joe Biden and his son, Hunter Biden. The investigation appears to have been tied to the release of security aid to Ukraine, which has been fighting a heated war with Russia for five years.

In his prepared remarks, Vindman said, "I was concerned by the call. I did not think it was proper to demand that a foreign government investigate a US citizen, and I was worried about the implications for the US government’s support of Ukraine." He says he reported the call to a White House lawyer out of concern for American national security.

Margaret Taylor, senior editor and counsel at Lawfare, says Vindman's appearance will push back against Republican arguments that much of the testimony in the impeachment inquiry has been secondhand knowledge.

“Vindman was actually on the call, and he twice registered internal objections about what the president was doing and what the inner circle was doing, how they're treating the Ukraine policy. And he says he's doing it out of a sense of duty,” Margaret Taylor said.

Vindman, a Ukraine-born, decorated American veteran, came under unsubstantiated character attacks prior to his testimony, claims that his former commander called “fear and hate mongering.”

Vindman's testimony is just the latest shoe to drop in the impeachment inquiry — and there have been a lot of shoes. Before the House votes on the next step Thursday, here are some key moments in the inquiry so far:

In the phone call, Zelenskiy expressed an interest in acquiring American military equipment. Trump — who had withheld military aid from Ukraine — responded, “I would like you to do us a favor, though.”

At least four national security officials were so troubled by what they heard on the call, according to The Washington Post, they raised concerns with a White House lawyer.

An anonymous whistleblower filed a complaint about Trump's dealings with Ukraine that was forwarded to Congress. The complaint was deemed urgent and credible.

House Speaker Nancy Pelosi announced the impeachment inquiry. The House of Representatives has the sole power of impeachment, according to the Constitution, though it is the Senate that has the power to try all impeachments and remove a president from office.

“The actions of the Trump presidency revealed dishonorable fact of the president's betrayal of his oath of office, betrayal of our national security and betrayal of the integrity of our elections,” Pelosi said in a statement.

The White House released a memorandum of the Trump-Zelenskiy phone call, which the president continues to call “perfect.”

....The entire Impeachment Scam was based on my perfect Ukrainian call, and the Whistleblowers account of that call, which turned out to be false (a fraud?). Once I released the actual call, their entire case fell apart. The Democrats must end this Scam now. Witch Hunt!

Text messages between Kurt Volker, diplomats in Kyiv and others were made public Thursday.

This is a Sept. 9 exchange between Bill Taylor, former amb to Ukraine, and Gordon Sondland, US amb to the EU, about withholding military assistance to Ukraine. https://t.co/OnnRy45mc5 pic.twitter.com/vaDqyD2Wd6

The White House called the impeachment inquiry “constitutionally invalid” and refused to comply with House investigators.

Still, nearly a dozen current and former officials have testified, including US ambassador to the European Union, Gordon Sondland, a Trump donor and political appointee. One of the “three amigos” who replaced core policymakers for Ukraine, according to testimony, Sondland was initially stopped from testifying by the State Department on Oct. 8, but spoke to Congressional investigators on Oct. 17.

“He is one of the really key people who have been involved with these efforts, along with Kurt Volker and Rudy Giuliani, of sort of putting into place these actions toward Ukraine that were sort of outside of the normal diplomatic channels,” Margaret Taylor said.

The same day, acting White House Chief of Staff Mick Mulvaney told reporters on tape that the Trump administration suspended military aid to Ukraine in order to force an investigation into the 2016 election — and that it was perfectly normal to do so. Mulvaney later walked that statement back, accusing reporters of misconstruing his words.

William Taylor, the top US diplomat in Ukraine, spoke to lawmakers behind closed doors on Oct. 22. In his opening statement, William Taylor said that “in August and September of this year, I became increasingly concerned that our relationship with Ukraine was being fundamentally undermined by an irregular, informal channel of US policymaking and by the withholding of vital security assistance for domestic political reasons.”

Other testimony from officials, including Fiona Hill, former national security adviser on Russian and European affairs; Marie Yovanovitch, ousted US ambassador to Ukraine; and Michael McKinley, former senior adviser to Secretary of State Mike Pompeo, have appeared to support the claim that the president's foreign policy in Ukraine was problematic and detrimental to US diplomacy.

Trump allies have cast doubt on the veracity of claims and engaged in ad hominem attacks on several of the officials testifying. But with the House vote Thursday, Americans will have a better look at the investigation going forward.

“Everything that's been done up until now is sort of perfectly fine and legally legitimate,” said Margaret Taylor. But the vote is important too. “It's more adding, I think, political legitimacy and heft to this process.”