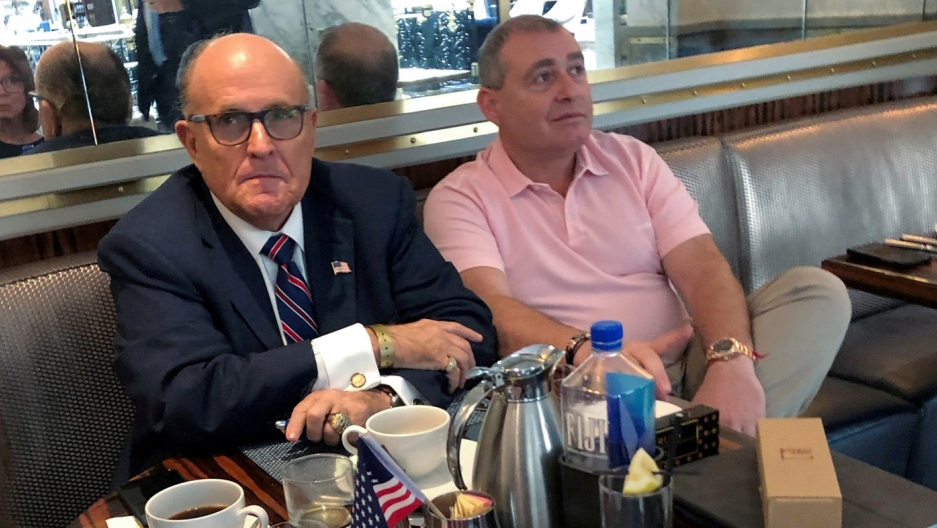 The phone call between US President Donald Trump and President Volodymyr Zelenskiy of Ukraine that launched the impeachment inquiry is generating a growing cast of characters.

Add to that list: Lev Parnas and Igor Fruman. They are the two men arrested this week at Washington Dulles Airport with one-way tickets to Europe.

Related: Why transcripts of Trump's calls with heads of state are so hard to get

Parnas and Fruman are Soviet-born US citizens, and are associates of Trump's personal attorney, Rudy Giuliani.

But instead of getting on their flight to Frankfurt Wednesday, the men were taken to a Virginia courtroom and charged with conspiring to violate a ban on foreign political donations. 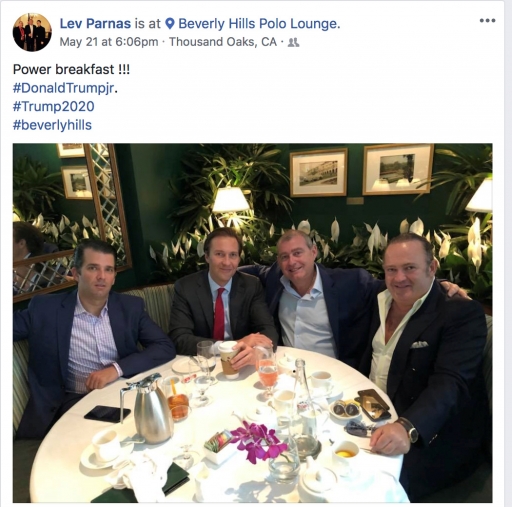 Donald Trump Jr. is seen at a meal with (L-R), Trump campaign fundraiser Tommy Hicks Jr., Ukrainian-American businessman Lev Parnas and Belarus-born businessman Igor Fruman in a 2018 screen capture from Parnas' social media account made by the Campaign Legal Center and released by the CLC after Parnas and Fruman's arrests on federal campaign finance violation charges in Washington, DC, Oct. 10, 2019.

Trump was photographed with the two men at the White House last year, though he denies knowing Parnas and Fruman personally. Donald Trump Jr. met with the men in 2018.

There is still much to be learned about Giuliani's ties to Ukraine. But one Ukrainian of whom Giuliani is not a fan is Ukrainian journalist and former member of parliament Serhiy Leshchenko.

Part of what has elicited Giuliani's ire for Leshchenko is his release of key documents revealing $12.7 million in off-the-book payments directed to Paul Manafort from the political party of former Ukrainian President Viktor Yanukovych, who was recently convicted of treason. Manafort is also known as Trump’s former campaign manager and is one of the major figures to fall in Special Counsel Robert Mueller's investigation for fraud.

Leschenko spoke with The World's Marco Werman about Giuliani and American connections in Ukraine.

Serhiy, this is somewhat complex. We know that Rudy Giuliani was hunting for dirt on Joe Biden and his son, Hunter, in Ukraine. What do you make of this news of the arrest of these two alleged Giuliani associates? Does it surprise you?

No, because these people were circulating here around in Kyiv. They were working as mediators to establish the contact between Mr. Giuliani and Mr. Zelenskiy. Their names are quite well known now here in Ukraine and their background is not really clear.

Related: As US focuses on impeachment, Ukraine worries about Russia

But the news does not surprise you?

It does not surprise me because the whole story smells like an attempt to provide additional favors for one of the candidates on American elections.

When did you first hear about Rudy Giuliani's involvement in Ukraine?

It was about April-May this year when Mr. Giuliani announced his trip to Kyiv to meet with president-elect Volodymyr Zelenskiy. At the same time, Mr. Fruman, Mr. Parnas — they met with some of his advisers with the idea, "Let's have a meeting between Zelenskiy and Giuliani."

Well, in May of 2019 — that would be Rudy Giuliani's decision not to go to Ukraine. There's a moment on Fox News where Giuliani raises your name as part of this whole story.

Rudy Giuliani: I'm not going to go because I think I'm walking into a group of people that are enemies of the president, in some cases enemies of the United States, and in one case an already convicted person, who hasn't been found to be involved in assisting the Democrats with the 2016 election. ... A gentleman by the name of Leshchenko, who supplied a black book that was found to be fraudulent.

Giuliani claimed there that black ledger is fraudulent.

No. This ledger is not a fraud. It's a real document. And Ukrainian law enforcement institutions today made official expertise of the signature in this book. And this signatures were found real — not a fake one. 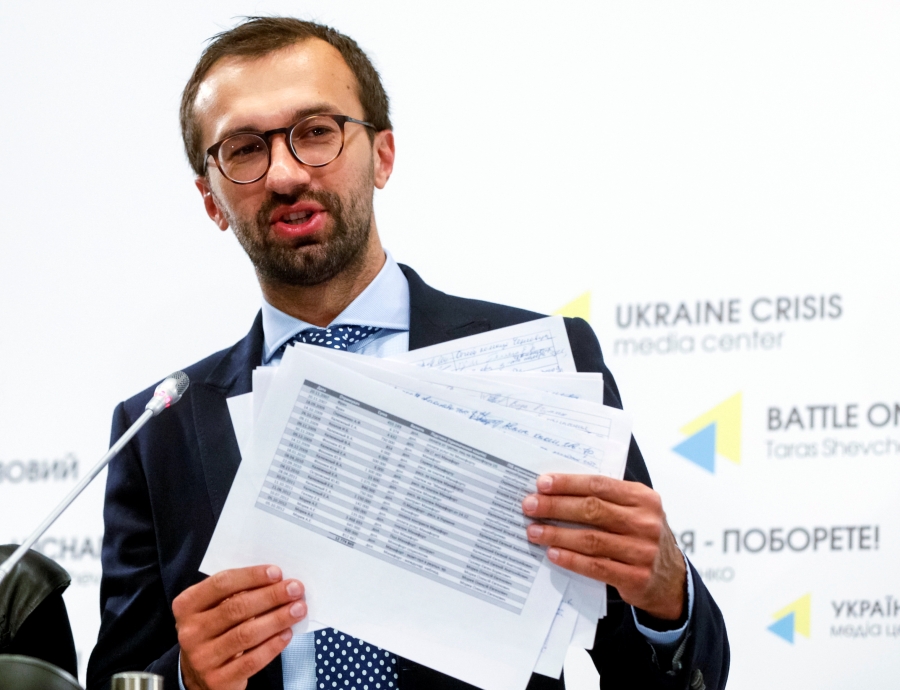 So this was the ledger of former President Viktor Yanukovych. It was kind of his way of keeping track of a lot of illegal stuff. And in it were the payments to Paul Manafort?

We should point out, Serhiy, that you weren't just a member of parliament, you're also an investigative reporter. What made you expose these documents?

I was really angry at Mr. Manafort since he was working for our ousted president, Yanukovych. Mr. Manafort made Yanukovych president of Ukraine and Mr. Yanukovych started to steal money off Ukrainian taxpayers and put Ukraine in this nightmare of the war with Russia. Mr. Manafort made a bad service for Ukraine. And I believe he was properly convicted by American judicial system.

You're no longer in the Ukrainian parliament. How did that happen?

It happened because Mr. Giuliani, in May this year, he made this interview which you mentioned for Fox News stating that I am an enemy of the United States, enemy of Trump, and I was a person convicted for the interference in American elections, which is fake news, which is not true. But at the time it was a transition team in Ukraine. So I was part of our president-elect team, and it was one week before inauguration, and after the statement of Mr. Giuliani — of course we care what the personal attorney of the American president is saying — and it was clear that we cannot ignore this. And I sat with my friends in Zelenskiy team and we discussed this issue. And it was clear that I cannot be appointed in this very dramatic time because the Ukrainian president cannot start his work in office with a conflict with the American president. I said that I would like to keep myself distant from this, to postpone my possible nomination and to leave my president with free hands to deal with the American president, as necessary for the national interest of Ukraine.

In Ukraine are you able to be an investigative reporter and dig for dirt on politicians and be a member of parliament at the same time?

In Ukraine it's legal, you can combine this activity by law.

Even the perception, though, that you are a politician or were — and an investigative reporter — do you think that gave Giuliani license to say you're working for the Democrats, because that's what he said. Are you? And were you ever?

It's not true. I was never instructed or ordered by Democrats to produce this evidence about Manafort.

What do you think is a liability for people in US circles, including Paul Manafort, Rudolph Giuliani, the Bidens — when they get involved with Ukrainian oligarchs and politicians?

In Ukraine, Ukrainian oligarchs — they would like to establish relations with the American establishment, American politicians, American think tanks. And they go to people like Manafort or Giuliani to find such contacts for a very good payment.