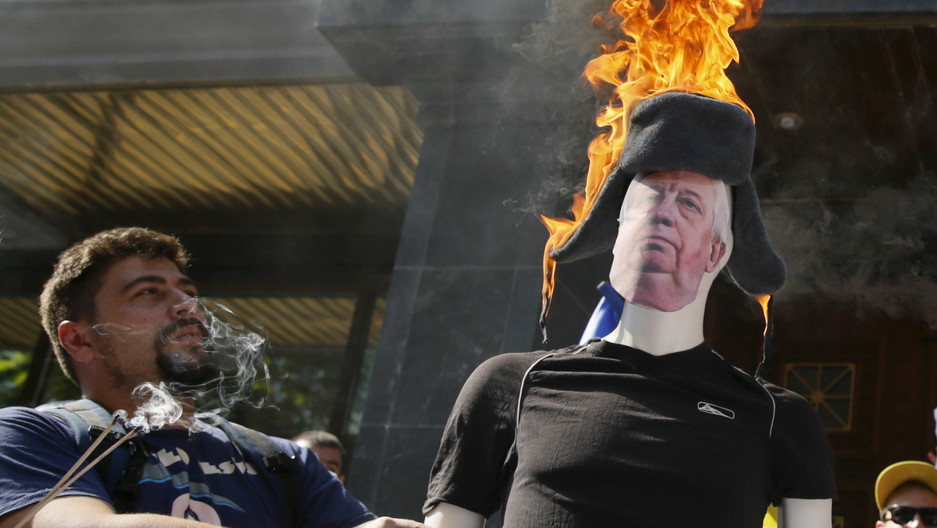 The US players wrapped up in the controversy have been household names since before the Trump presidency. But who are the key Ukrainian figures — namely, Viktor Shokin and Yuriy Lutsenko? Both are former Ukrainian prosecutors with checkered pasts.

Trump pressed Ukraine to investigate the Biden family, accusing Joe Biden of strongarming the Ukrainian authorities, including the then-President Petro Poroshenko, to fire General Prosecutor Viktor Shokin in 2016 to protect his son.

Shokin says he was fired to prevent him from investigating Hunter Biden, which the Biden family strongly denies. There is no evidence of wrongdoing by the Bidens.

Olena Sotnyk was a member of Ukraine's parliament until July. She's now a fellow at Yale. Sotnyk knew both Shokin and Lutsenko, and voted against their confirmation.

Sotnyk spoke with The World's Marco Werman about Ukrainian perspectives on the current impeachment inquiry.

"About Shokin, I believed that he couldn't be the guy who is going to fight with corruption, he just will continue with the same schemes," Sotnyk said. "And Yuriy Lutsenko, also we've been very critical about his appointment because first of all, he is not a lawyer. He used to be a close friend and partner of [Petro] Poroshenko. He used to be the head of political faction of Poroshenko — former Ukrainian president. And his appointment — it was a huge political mistake because when you want to appoint your close friends and political actor as a general prosecutor, it means you want to have influence on this office.

Marco Werman: So in your opinion are these men credible or do we need to take their accounts with a grain of salt?

I think it is still doubtful.

How do you see this whole story with Ukraine now unfolding and what's turned into an impeachment inquiry on President Trump?

I have, I would say, different feelings because, from one point of view, of course, is a huge domestic issue. But still, it is a huge geopolitical issue.

And when you say huge domestic issue, you're talking about domestically in Ukraine or here?

I would say more here because in Ukraine, the main worries is about what is going to happen next. Do we still have support of the United States on geopolitical arena or we are now alone with [Russian President Vladimir] Putin and his aggression? For United States, I think, is the rule of law still a main pillar for the justice in the country?

Well, let me ask you about that, because Exhibit A on where the rule of law stands right now is President Trump withholding hundreds of millions of dollars in military aid for Ukraine unless Ukraine investigates Joe and Hunter Biden and then Trump calls Ukraine corrupt. How do Ukrainians see all this?

What is happening now, everybody focused on the United States and Ukraine and Ukrainian reputation, I would say, a bit undermined. That's why, if we are going to lose a friendship and support of United States, of course for Putin it would be the main victory. He is gaining a lot from this situation. I think like he sitting now in the Kremlin and drinking champagne when you have the scandal in United States and we don't know what will happen in the next days.

You became involved with politics after Euromaidan, the big wave of demonstrations by Ukrainians against government corruption in their country. Where do you see Ukraine today in its fight for democracy?

It's still like tough issue. This is a country with very talented people who really want to build a democratic society and who really suffer from the Russian aggression and Russian influence, which is everywhere. And of course, compared to Russia, we don't have this, sorry, oil and gas money, you know, to fight with this. And that's why we really need the support of our big friend, of [the] United States. And I believe that Ukrainians can be like some kind of new wave of European values because we are the only one who really died for European values. I want to remind you that during the Maidan, more than a hundred people died and they died with European Union flags and Ukrainian flags because they still believed that we want to be a part of the democratic world and we want to be a part of this civilized politics.