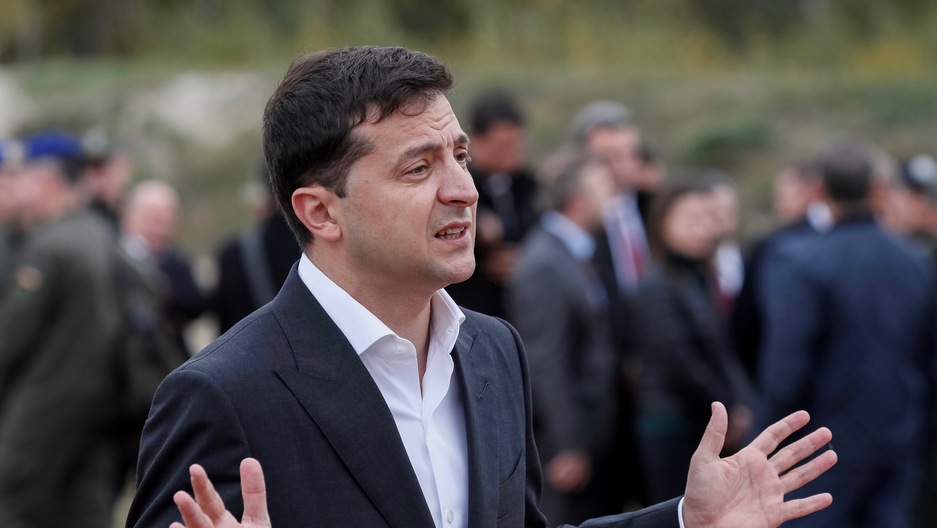 Ukrainian President Volodymyr Zelenskiy speaks with journalists during a joint drill of departments of Interior Ministry at the International Training Center near the village of Stare in Kyiv region, Ukraine, Sept. 30, 2019.

US President Donald Trump on Monday intensified his attacks on a lawmaker leading the House of Representatives' impeachment inquiry, suggesting that Rep. Adam Schiff should be arrested for "treason."

Witnesses are due to testify in the House this week in hearings related to Trump's request that a foreign power investigate former Vice President Joe Biden, one of the leading Democratic candidates seeking to challenge him in 2020.

Related: Who is responsible for enforcing the US whistleblower law? The president.

A US intelligence official filed a whistleblower complaint citing a July 25 telephone call in which Trump asked Ukrainian President Volodymyr Zelenskiy to investigate Biden, along with his son, Hunter Biden, who sat on the board of a Ukrainian gas company. The whistleblower has not been publicly identified.

In a series of Twitter posts on Monday morning, Trump appeared to reference comments made by House Intelligence Committee Chairman Schiff during a committee hearing last week. In those comments, Schiff says the call to Zelenskiy "reads like a classic organized crime shakedown" and parodies the president's remarks.

Related: Spies and the White House have a history of running wild without congressional oversight

Rep. Adam Schiff illegally made up a FAKE & terrible statement, pretended it to be mine as the most important part of my call to the Ukrainian President, and read it aloud to Congress and the American people. It bore NO relationship to what I said on the call. Arrest for Treason?

A spokesman for Schiff did not immediately respond to a request for comment.

Monday's post followed a string of tweets from Trump on Sunday evening in which he said he wanted to meet the whistleblower, whom he called "my accuser," as well as "the person who illegally gave this information" to him or her.

Democrats accuse Trump of pressuring a vulnerable US ally to get dirt on a rival for personal political gain. The phone call with Zelenskiy came after Trump froze nearly $400 million in aid intended to help Ukraine deal with an insurgency by Russian-backed separatists in the eastern part of the country. The aid was later provided.

The Intelligence Committee is leading the inquiry in the Democratic-led House, which could lead to approval of articles of impeachment against the Republican president and a subsequent trial in the Republican-led Senate on whether to remove Trump from office.

The whistleblower, whom Schiff said on Sunday will appear before the panel very soon, says that according to multiple White House officials, "this was ‘not the first time' under this administration that the record of a telephone conversation was then placed into a codeword-level system to protect politically sensitive — rather than national security-sensitive — information."

Tom Blanton directs the National Security Archive at George Washington University. He spoke to The World's host, Marco Werman, about the "codeword-level" system.

"Every other telecon I've seen had an individual person — someone like Rose Gottemoeller, who was on the White House staff, or Nicholas Burns, who went on to be high-level State Department — they would be listed as note-taker because they were responsible for making sure the transcript was accurate as possible. The second really unusual item is the caveat down at the bottom of the page; it says 'caution,' it's not a verbatim transcript. It just is our notes and recollections of these duty officers and policy staff, and there are a lot of factors that can make it inaccurate.' That's a really unusual caveat," Blanton said.

Marco Werman: And in terms of tone, how does Trump come across compared to previous US presidents?

Tom Blanton: Especially at the beginning of the conversation, it seems either he was badly briefed, or — President Trump is pretty notorious for resisting all briefing. He seems to be congratulating Zelenskiy of Ukraine on the earlier presidential election. He says, "Oh, you came out of nowhere, came from behind, you ended up winning easily." Actually, this phone call was about the parliamentary elections because Zelenskiy won the presidency, but he had a parliament that was opposed to him. So, he called elections, and it became the first time ever in Ukraine's independent history that one party got a majority of the parliament. So, we had an overwhelming mandate for reform, and President Trump doesn't seem to realize that's what's going on here.

Well, reportedly Trump doesn't pay attention to a lot of his briefings. Is there any way to tell how well former presidents are briefed prior to these consequential phone calls with other heads of state?

How did the five-page record of the call between Trump and Zelenskiy compare to what we know about, say, this call Trump had with Mexico's leader in 2017, Enrique Peña Nieto.

That's a great question because we really only have three of these telephone transcripts from President Trump's time in office, and two of them — one with the Mexican president and one with the Australian prime minister — were leaked to The Washington Post in August of 2017. And they are equally fascinating because with the Mexican president, you have President Trump saying to him, "Yeah I understand that; yeah, you're not going to pony up any money for that wall. But don't say that in public. Stop saying that in public. That's really bad for me politically that you're saying Mexico won't pay won't pay." There's a similar dynamic with Australia, and the Australian prime minister is trying to tell President Trump, "Look you've got to take these 1,250 immigrants that are otherwise in this prison camp on the Nauru island because it's a deal we made. And so, you've got to do that. You get to vet them." And Trump gets so exasperated. He says, "This is the worst call. This is ridiculous. I've had it," and pretty much hangs up on the Australian, and it kind of goes to the similarities between these three calls: one with the Mexican, one with the Australian, and now this one with the Ukrainian. It's all about President Trump himself and his political concerns — it doesn't seem to be about the national security interests of the United States.

So, Vladimir Putin, the Russian president, his spokesman says transcripts of telephone conversations between the Russian president and Donald Trump — those can only be released with the Kremlin's permission. So, does the uproar over the Trump-Zelenskiy phone call mean that the public is any more likely to hear about sensitive discussions that President Trump might have had with Vladimir Putin or other world leaders like Mohammad bin Salman of Saudi Arabia?

That's a great question, because one of the outstanding issues is whether President Trump even kept records of many of those conversations. There are at least, I think The New York Times reported at least five, six different head of state meetings, including a couple with Putin, a couple with North Korea's Kim and one with Prince Salman, where the president either took away the interpreter's notes or specifically excluded any note taker from the meeting. So, there was no record.