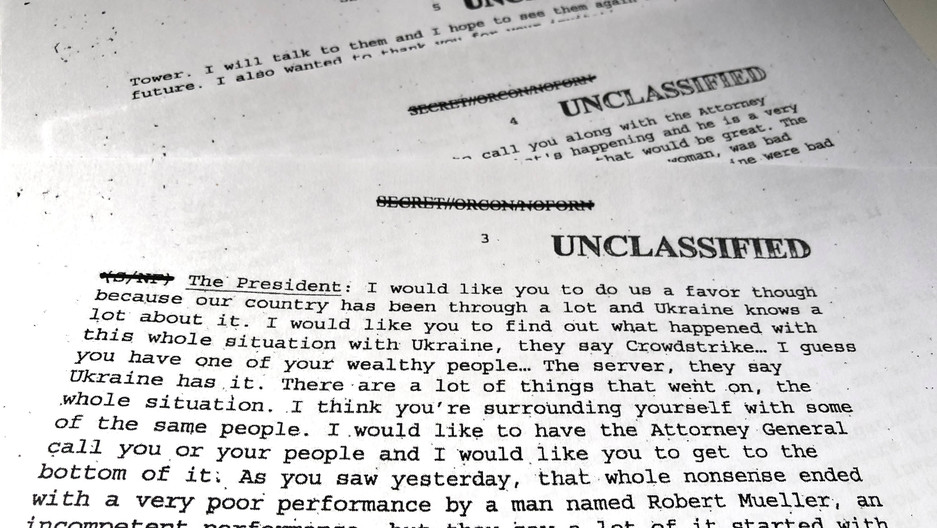 A section of a White House memorandum describing US President Donald Trump's call with Ukrainian President Volodymyr Zelenskiy shows Trump asking for a favor in this copy of the memorandum released by the White House in Washington, DC, Sept. 25, 2019.

At the heart of the current crisis over US President Donald Trump’s dealings with Ukrainian President Volodymyr Zelenskiy is an intelligence whistleblower whose information has finally made it into public view.

The whistleblower’s complaint about Trump’s interaction with Zelenskiy was initially withheld from the House Intelligence Committee, something which the committee chairman protested was a violation of the law.

The complaint was ultimately turned over after House Speaker Nancy Pelosi announced an impeachment inquiry of the president and almost two weeks after the committee subpoenaed it, and after the Senate had passed a unanimous resolution to provide the complaint to Congress.

For decades now, the evolving role of congressional oversight of US intelligence has involved major clashes and scandals, from the Iran-Contra affair of the 1980s to the intelligence abuses that led to the 2003 war in Iraq.

Central to all of these clashes are attempts by intelligence agencies, the president and the executive branch to withhold damning information from Congress. Another common element is the use of civilians to carry out presidential or intelligence agency agendas.

“Intelligence” is the government’s term for collection of information of military or diplomatic value. After World War II, large, new agencies — the CIA and the National Security Agency — were established to conduct information gathering and secret operations.

From the aftermath of World War II to the 1970s, there was virtually no congressional oversight of this intelligence apparatus. And there was only intermittent presidential direction. During the Cold War, intelligence was considered too sensitive for Congress to know.

Some of the agencies’ intelligence work, called “covert activities,” was not mere information-gathering. And some of the activities undertaken by these agencies had a profound impact around the world — without US democratic institutions playing a role.

For example, in 1953 the CIA overthrew the democratically elected leader of Iran, Mohammad Mossadegh, and installed in his place the shah, an autocrat who proved happy to do what the US wanted.

The public and Congress had little or no awareness that the CIA engineered this.

In the 1970s, between information uncovered in the Watergate hearings and some key investigative journalism, the lid blew off the intelligence agency’s secrecy about the CIA’s many covert interventions, both in other countries’ affairs and in the US.

A special temporary committee headed by Sen. Frank Church (D-Idaho) was established in 1975 to explore “the extent, if any, to which illegal, improper or unethical activities were engaged in by any agency of the Federal Government.”

The activities uncovered included various unsuccessful attempts to kill Fidel Castro, the communist leader of Cuba. The CIA’s plans for Castro’s assassination included help from organized crime figures like Santo Trafficante and other people who were not US government officials. Rudy Giuliani is not an organized crime figure, but he’s similar in that he’s a civilian involved in foreign affairs: in this case, the president’s dealings with Ukraine.

The Church Committee discovered CIA plots that were known by presidents; they discovered some that were not. None was known by Congress. The very idea that intelligence agencies could plot overthrowing or murdering foreign leaders without congressional oversight flabbergasted lawmakers.

The Church Committee and its sister committee in the House recommended a major reform: the creation of House and Senate Intelligence Committees that would have oversight over intelligence agency activities.

These oversight committees were to be kept fully and currently informed by the intelligence agencies. Nothing was to be withheld from Congress.

The notion that Trump could force a Ukrainian government investigation of Joe Biden, and that this would be withheld from the House Intelligence Committee, directly contradicts the imperative of congressional oversight established by Congress in the late 1970s.

In the 1980s, the House Intelligence Committee faced one of its greatest challenges — the Iran-Contra affair. President Reagan had kept secret from the committee that he had approved arms-for-hostage deals with Iran and used the proceeds for resupplying arms to the Contras, who were opponents of the Sandinista regime in Nicaragua.

These covert measures fulfilled some of Reagan’s major foreign policy goals. They were not matters of personal political benefit for the president, as the Ukraine affair represents with Trump. When the scandal broke from news about hostage-trading and about a plane crash in the Contra resupply operation, the House formed an Iran-Contra investigating committee. I was special deputy chief counsel of that committee, which was a select committee drawn in part from the House Intelligence Committee.

The Iran-Contra initiatives, although led by Oliver North of the national security staff, also relied on civilians to carry out plans, not unlike Rudy Giuliani. These were Richard Secord, with a military background, and Albert Hakim, an accountant who spoke fluent Persian.

Such private figures have enormous power by virtue of their connection to the White House while simultaneously being exempt from routine public sector oversight by congressional intelligence committees. 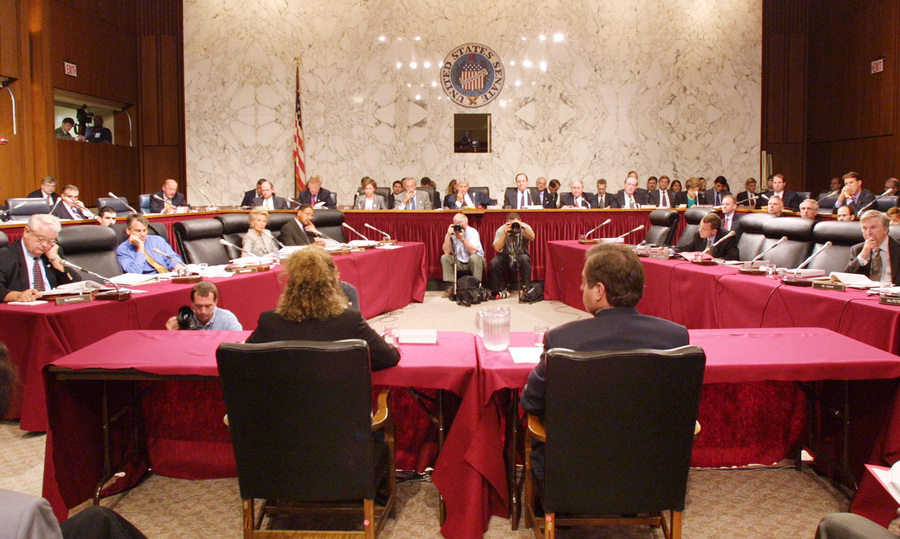 Kristen Breitweiser (left, back to camera), co-founder of September 11th Advocates, testifies with Stephen Push, co-founder and treasurer of Families of September 11th, at the joint hearing by the US Senate and House Intelligence Committees on Capitol Hill in Washington, DC, Sept. 18, 2002. Breitweiser called for accountability on the US government in its failure to prevent the September 11, 2001 attacks on America. After six months of closed door hearings, the joint committee is holding its first public hearing on the events surrounding September 11 attacks.

After 9/11, when al-Qaeda terrorists destroyed the World Trade Center, the CIA and President George W. Bush came under congressional scrutiny for how much they had known in advance — and ignored.

Initially, they were reluctant to divulge what they knew, much like Trump at first fought oversight about his talks with Zelenskiy.

But eventually it came out that Bush’s daily briefing from the intelligence community had warned of plots to crash airplanes into buildings.

In 2002 came what many consider one of the greatest abuses of intelligence. President Bush and Vice President Richard Cheney bent the CIA’s intelligence reporting to support a United States invasion of Iraq. Internally, the CIA knew its intelligence was extremely weak about whether Iraq had weapons of mass destruction.

But the CIA served Bush and Cheney and made the public case to invade Iraq. Only after the war was over could the House Intelligence Committee penetrate the secretiveness of the CIA and find out the case for the Iraq war was built on foundations like the extremely dubious tales of the informant known as “Curveball.”

What can be learned from history about the Ukraine scandal?

One lesson is the enormous struggle Congress in general, and the House Intelligence Committee in particular, has waged to exercise democratic accountability over presidential actions. That accountability is made impossible when private citizens — Richard Secord, Albert Hakim, Rudy Giuliani — are used by presidents to carry out foreign affairs.

Another lesson is the power of the CIA to withhold from Congress what it knows would embarrass the president.

And yet another lesson is the disastrous foreign affairs repercussions when the intelligence system is abused by presidents.

The Ukraine affair is the latest intelligence crisis in the troubled control of foreign affairs by the representatives of the American public.

Charles Tiefer, Professor of Law, University of Baltimore. This article is republished from The Conversation under a Creative Commons license. Read the original article.