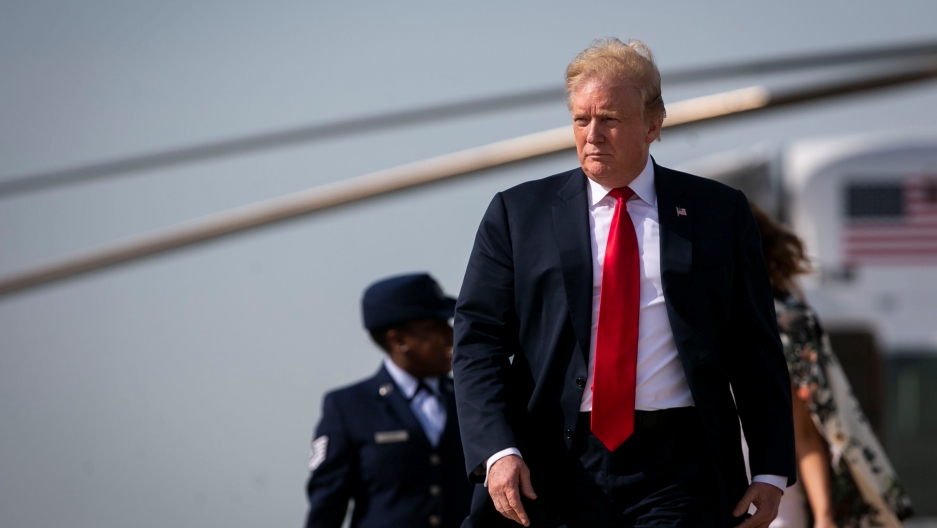 US President Donald Trump walks to board Air Force One as he travesl to Florida for Easter weekend, at Joint Base Andrews in Maryland, April 18, 2019.

Special Counsel Robert S. Mueller’s office uncovered “evidence of numerous links” between officials working on Donald Trump’s presidential campaign and individuals “having or claiming ties to the Russian government,” according to a 448-page, partially redacted report the Justice Department made public Thursday.

But did it find evidence of collusion?

That depends on your definition of the term. “No collusion” has become Trump’s common refrain throughout the course of Mueller’s two-year investigation — and Thursday he tweeted a Game of Thrones meme with those words. Attorney General William Barr invoked the term again in a press conference prior to the report's release, saying the investigation found “no underlying collusion with Russia” by the Trump campaign.

Collusion is not a legal concept, so to say “no collusion” doesn’t mean much, legally speaking. In its investigation, the Mueller team focused on “conspiracy” — a specific term in federal criminal law defined as an agreement between two or more people to commit an offense and then act in support of that agreement. 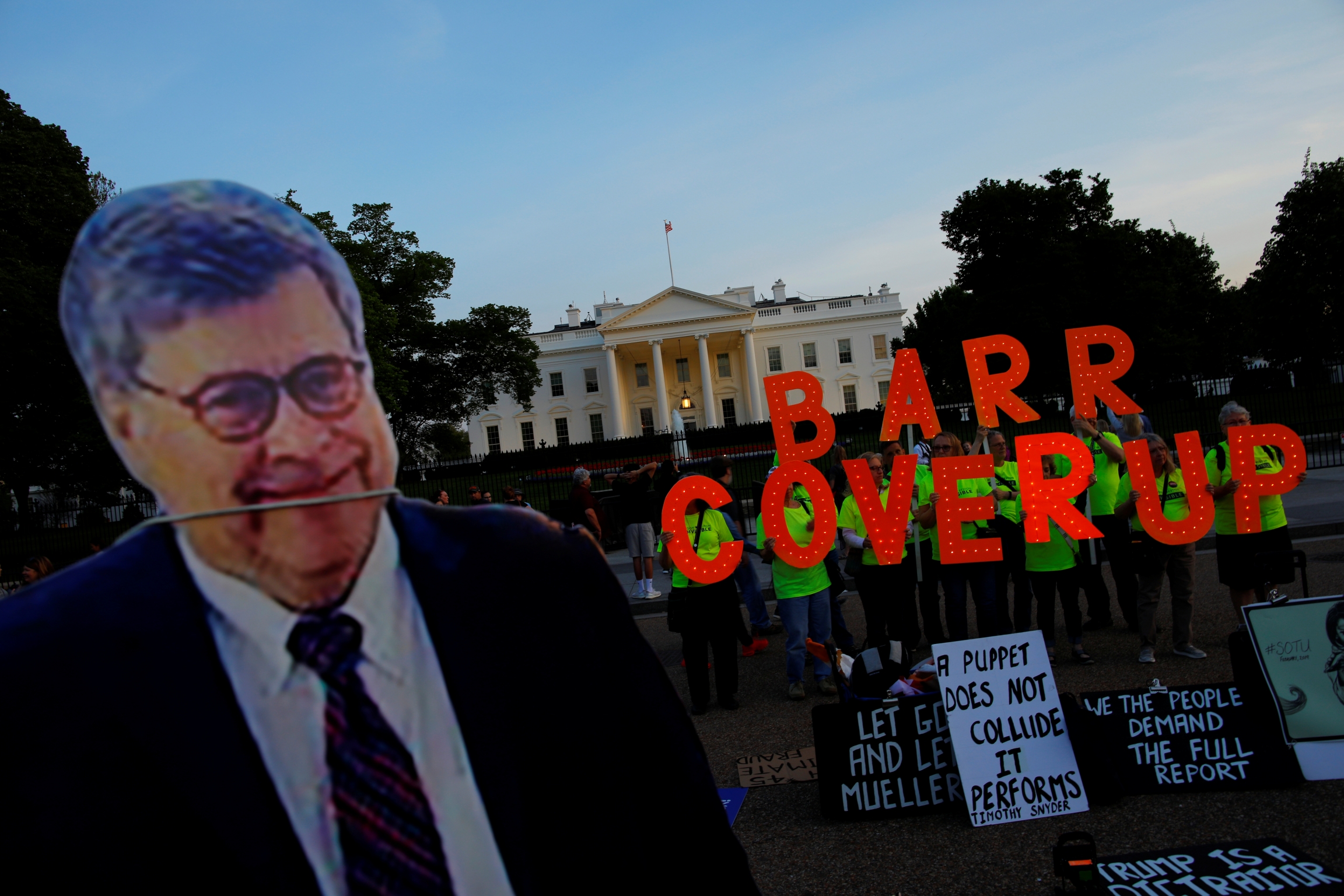 A cardboard cutout of US Attorney General William Barr is seen as protesters hold signs which read "Barr Coverup," following the release of the Mueller report on President Donald Trump at the White House in Washington, DC, April 18, 2019.

To analyze liability for criminal conspiracy, Mueller’s office sought evidence of coordination between the Trump campaign and Russia’s efforts to interfere with the 2016 US presidential election. View note

The report establishes Russia interfered in the election “in a sweeping and systematic fashion” to divide American voters and disparage Democratic Party candidate Hillary Clinton, a charge Trump has repeatedly denied. It details numerous connections between the Trump campaign and Russians, some which were previously undisclosed. There were meetings in pursuit of a coordinated US-Russia foreign policy, business deals such as a Trump Tower in Moscow, and “dirt” on Clinton and her emails.

But all of the evidence tying the Trump campaign to Russian operatives was not “sufficient to establish or sustain” criminal conspiracy.

But all of the evidence tying the Trump campaign to Russian operatives was not “sufficient to establish or sustain” criminal conspiracy, Mueller wrote. In other words, Mueller did not find sufficient evidence that those connections — which a layperson may understand as collusion — met the high bar where prosecutors could potentially prove in court that the Trump campaign actually broke the law through, say, direct involvement in Russian crimes or a formal agreement with Russia to get Trump elected.

“The critical element in conspiracy is the agreement to violate the law,” explains Ben Gershman, a former prosecutor and professor of criminal and constitutional law at Pace Law School in New York. “So Mueller would’ve had to find that the Russian operatives … were working together with the Trump campaign officials, and that they would be doing this to help Trump get elected.”

The report acknowledged that the Trump campaign and the Russian government were working toward the same ends, but not necessarily conspiring together to do so. The first page of the report lays this out:

“Although the investigation established that the Russian government perceived it would benefit from a Trump presidency and worked to secure that outcome, and that the Campaign expected it would benefit electorially from information stolen and released through Russian efforts, the investigation did not establish that members of the Trump Campaign conspired or coordinated with the Russian government in its election interference activities.”

One of the earliest links between the Trump campaign and Russia came in 2015, when then-candidate Trump began pursuing a Trump Tower project in Moscow. Trump’s personal lawyer, Michael Cohen, handled negotiations for the potentially lucrative project, even as Trump publicly denied having business interests in Russia on the campaign trail.

“The critical element in conspiracy is the agreement to violate the law.”

Other meetings between Trump associates and Russians were tied to the campaign.

In the spring of 2016, Joseph Mifsud, a London-based professor with ties to Russia, approached George Papadopoulos promising the Russian government had “dirt” — this appears in quotes in the Mueller report — on Clinton in the form of “thousands of emails.” Papadopoulos, a foreign policy adviser to the Trump campaign, worked for months to arrange a meeting between the campaign and Russian government officials. However, campaign officials largely brushed off Papadopoulos’ attempts to set up a meeting and the Special Counsel could not find documentary evidence that Papadopoulos shared information regarding “dirt” with Campaign officials. Papadopoulos pleaded guilty to lying to the FBI and served time in prison.

Related: What does the end of the Mueller investigation mean for US-Russian relations?

Throughout the campaign, Trump’s campaign manager Paul Manafort and deputy campaign chair Rick Gates shared polling data with Konstantin Kilimnik, a Russian national and longtime Manafort employee, who both men believed to be a “spy,” according to the report. It was understood that Kilimnik was passing on the data to a Russian oligarch with ties to the Kremlin. Last month, Manafort was sentenced to 73 months in prison after he pleaded guilty to multiple charges, including conspiracy against the United States and conspiracy to obstruct justice.

And in the summer of 2016, Trump publicly stated he hoped Russia would “find the 30,000 [Clinton] emails that are missing.” Within “five hours,” the report states, Russian hackers were trying to break into Clinton’s accounts. Meanwhile, Trump ordered Michael Flynn — who would later serve as his National Security Adviser — to find them. Flynn contacted Barbara Ledeen, a Republican Senate staffer, and Peter Smith, an investment adviser who claimed he was in touch with Russian-affiliated hackers. Blackwater founder Erik Prince helped fund these efforts by hiring a tech expert to authenticate emails Leeden says she found on the “dark web.” There was no evidence the Trump campaign ever obtained the emails, the report states.

The report also details the lengths Trump associates and aides went to cover up or lie about their contacts with the Russians.

“To say the Trump campaign’s contact was unethical, immoral and undermining America’s democratic process is one thing. It’s another to say there was a conspiracy."

Taken together, such incidents certainly paint a picture of a campaign receptive to Russian help and willing to use and disseminate information obtained by Russian hackers.

Related: There are at least 17 Trump investigations and they're 'bigger and broader' than most realize

So despite Trump’s insistence there was no collusion, Mueller did not actually make a finding on that claim. After all, Mueller is a prosecutor, and “collusion” is not a prosecutable offense.

Instead, Mueller looked for evidence of the very specific crime of conspiracy — and used a narrow interpretation of the federal conspiracy statute. The fact that Trump won the election, with Russia’s help, isn’t enough to show the two sides conspired.

All of that aside, the report offers the clearest window yet into how the Trump campaign and administration operate through manipulation and dishonesty. It is now largely up to Congress to decide on next steps.