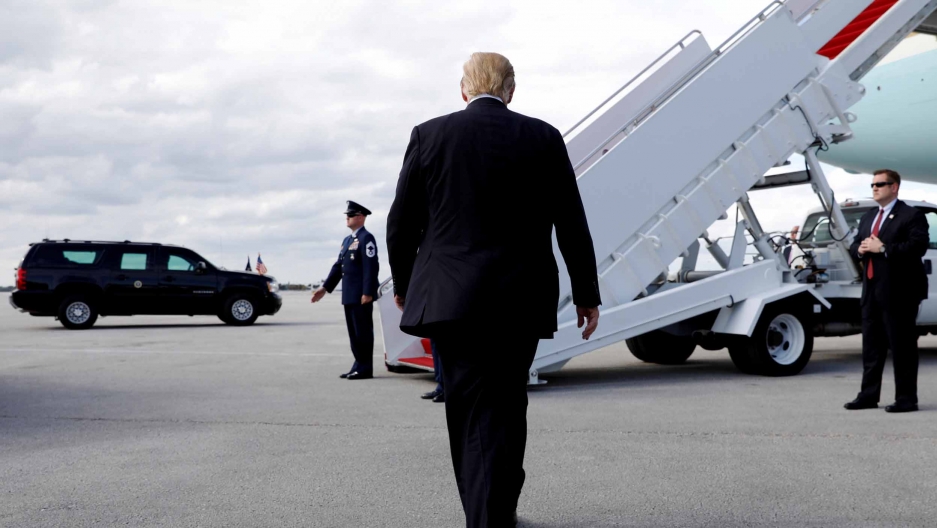 US President Donald Trump walks upon his departure from West Palm Beach, Florida, on March 24. The Mueller investigation is over and investigators concluded there was no coordination between Trump's campaign and Russian hackers.

Special Counsel Robert Mueller found no evidence of collusion between US President Donald Trump's campaign and Russia in the 2016 election, but left unresolved the issue of whether Trump obstructed justice by undermining the investigations that have dogged his presidency.

The Kremlin said following the release of US Attorney General William Barr's summary that President Vladimir Putin was ready to improve ties with the United States, but that it was up to Washington to make the first move.

"In this case, the ball is absolutely in their court. It was given to Trump in Helsinki," Russian presidential spokesman Dmitry Peskov said in a conference call with reporters on Monday, referring to a summit between Putin and Trump in the Finnish capital in July 2018.

Peskov repeated Moscow's denial of any interference in US elections and internal affairs or those of any other country.

"...It's hard to find a black cat in a dark room, especially if there is no cat," Peskov said.

Mueller's 22-month investigation ended with a finding that no one in Trump's campaign "conspired or coordinated with the Russian government," according to Barr's four-page summary of the confidential report.

But Michael McFaul, who served as ambassador to Russia in the Obama administration from 2012 to 2014, says he's worried that now that the investigation is over, Trump's efforts to improve US-Russian relations could cause new problems. McFaul spoke to The World's Marco Werman about the impact of the end of the Mueller investigation.

Marco Werman: Ambassador, what's your take now that Special Counsel Robert Mueller has handed in his report and has found no collusion between the Trump campaign and Russia?

Michael McFaul: Well, my first reaction as an American is I'm relieved. So, I think that's good news for all Americans. I have lots more questions. I'm eager to see the report. We don't know the full details of what the Russians did in 2016. Robert Mueller and his team are now the world experts on that topic, and I hope we'll get the full details from them so that we can prevent such interference from happening in the next presidential election.

I mean, this investigation lasted pretty long, almost two years. Do you think it's done damage to US-Russian relations and if it has, is the damage fixable?

Well, it most certainly made it harder for President Trump to engage with President Putin and most certainly the reaction in Moscow is "now's the time for a new reset." I personally disagree with that. Russia has been engaging in belligerent behavior against America's national interests, be it annexation of Crimea or violating our sovereignty in 2016. So, I would hope that we have continuity in the policy where we deter Putin rather than try to seek rapprochement with him now.

Related: Russia agrees with Trump. The hacking investigation is a 'witch hunt.'

I mean, hearing you say that — it feels like things kind of have been on pause with Syria, with Crimea. What hasn't gotten done geopolitically speaking, as a result of the Mueller investigation and all the accusations?

Well, I think you have this very odd paradox where the Trump administration has a pretty good policy towards Russia — confronting them, sanctioning them, pushing back and supporting Ukraine, supporting NATO. But the president himself has time and time again said on the record that he disagrees with that policy. Now, I hope he continues to disagree and the policy will remain the same. I do wonder, however, if with the lifting of this cloud of the Mueller investigation, you might see President Trump move more aggressively towards personalizing diplomacy with Putin and my own view is that would be a mistake — that would not be in America's national interest.

Elaborate a bit more on what you mean by personalizing diplomacy? I mean, what are your specific concerns about the relationship between this White House and Russia?

Well, I think it's a pattern during the Trump era, that President Trump believes through his personal relationships with leaders he can achieve foreign policy objectives that the rest of the government cannot. To date however, I think you haven't seen many concrete objectives of that kind of approach. And what I fear with Putin is that in the name of a good relationship with Putin and Russia, President Trump will forget about the annexation of Crimea, he'll forget about the disastrous war that Putin has helped to execute in Syria and he'll forget about what Putin did during the 2016 presidential elections. What we know of what Mueller has done so far — illustrated most elaborately in the two indictments of the two groups of Russians — is that they had a multipronged —

— you're talking about from an Internet Research Agency?

Exactly. The Internet Research Agency and the GRU, the Russian military intelligence officers, who stole data from the Democratic National Committee and John Podesta and published it with the intention to influence how Americans vote. We can't just say, well let's just forget about that and move on. There has to be consequences to those Russian actions.

What is your sense, ambassador, of how active various entities in Russia are about interfering in the 2020 election here in the US?

Well, I think it's too early to tell. They don't reveal what they're going to do this far ahead of time. But what I would say — which scares me — is that we've done next to nothing to enhance our efforts to deter that. All the things that they did in 2016, the permissive conditions are still available for them to do it again in 2020.