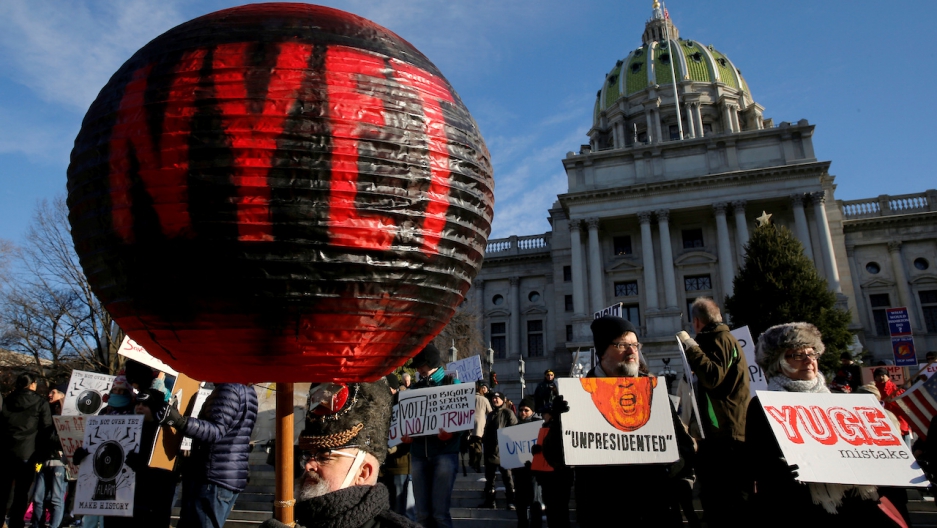 People protested then-President-elect Donald Trump as electors gathered to cast their votes for president at the Pennsylvania State Capitol in Harrisburg, Pennsylvania, Dec. 19, 2016.

If much of the US was transfixed by the sight on Monday of two of America’s top intelligence officials sitting in Congress, addressing allegations of Russian meddling in the US elections, the Kremlin claimed it had better things to do.

“We have many concerns in the Kremlin and following that [debate] isn’t one of them,” said presidential spokesman Dmitry Peskov.

“New information we’re not hearing and doubtfully will hear,” said Peskov, who went on to compare the hearings to a “broken record” being played ad nauseum.

“It’s an internal American issue,” added Peskov. “Our relationship to all this hysteria is well known.”

Indeed, while a growing list of Trump administration officials have struggled to recall past contacts with Russian officials, the Kremlin has been consistent in its response to the hacking charges emanating from Washington.

There was Vladimir Putin in September insisting that “Russia on a state level has never practiced” cyber intrusions. (Putin also insisted that sharing the contents of hacked emails was a public service.)

There was spokesman Peskov, in October, calling allegations of Russian hacking of the Democratic National Committee computer infrastructure simply “nonsense.”

And there was Putin, in his annual press conference in December, dismissing allegations Russian hacking tipped the election in Donald Trump’s favor, or that Russia colluded with Trump campaign officials along the way.

US Democrats who accuse Russia of such things, said Putin, “are looking for someone outside to blame.” The Russian leader went on to note that Democratic candidates lost big in election contests in the Congress and Senate as well.

“Is that also our work, my work?” asked Putin.

Just last week, the Kremlin was at it again — denying charges by the FBI that its intelligence agents were involved in the hacking of millions of Yahoo users' email accounts.

Spokesman Peskov said Russia had only learned of the indictments of its agents and two other men through the media, and hoped US officials would soon shed light on the charges.

Peskov added that Russia had never been involved in any illegal state-sponsored hacking — lest anyone need reminding.

Donald Trump’s victory in the November election was heralded by many in Moscow as an opportunity: After years of deeply antagonistic relations with the Obama administration, a chance for a Trump White House to cooperate with the Kremlin on a host of issues, including Syria and the fight against global terror. Even sanctions relief over Russia’s actions in Ukraine was considered within the realm of possibility.

Already, much has changed.

Under pressure from the multiple investigations into Russia’s interference during the US election, top Trump administration officials — from Vice President Mike Pence to the secretaries of state and sefense, as well as the ambassador to the United Nations — have all pulled back on suggestions of a quick pivot in relations with Russia.

Moreover, FBI Director James Comey’s testimony now makes clear the administration must deal with the fallout of an open-ended investigation into the Russia election issue, including questions over possible collusion between the Trump campaign and the Kremlin.

On Tuesday, even Kremlin spokesman Peskov acknowledged the tough road ahead.

"It's doubtful to consider [the hearings] constructive in the development of joint relations," noted Peskov, speaking to journalists in Moscow.

Time and again, Russian officials have portrayed the congressional investigations as attempts by Trump's enemies in Washington to derail at any cost the president’s calls for improved US-Russian relations.

Even President Trump seemed to acknowledge the potential constraints the election scandal presented to détente with Moscow during his first official press conference last month.

"Probably Putin assumes that he’s not going to be able to make a deal with me because it’s politically not popular for me to make a deal," Trump said.

Kremlin officials openly quote from President Trump’s own tweets on the matter, calling the continued congressional focus on Russia “paranoia,” and a “witch hunt” reminiscent of Sen. Joe McCarthy's Red Scare of the 1950s.

Given that perception, an announcement by the Reuters news agency that US Secretary of State Rex Tillerson would skip an April NATO summit in favor of meetings with his Russian counterpart in Moscow next month came as welcome news to Russian officials eager to at last engage with the White House.

Confusion over the rollout of the announcement — with various US and Russian officials unable or unwilling to confirm the exact dates of Tillerson's visit — suggested the hacking scandal still looms large in the minds of the Trump administration and Kremlin officials.

Foreign Ministry spokeswoman Maria Zakharov noted that a State Department source had leaked the news to the American press, and echoed a common complaint from congressional Republicans during Monday's hearings: Leaks, rather than Russian interference, are the primary problem facing Washington.

"We're absolutely surprised by the constant leaks of sensitive information coming out of Washington," Zakharova wrote on her Facebook page.

"It's time for the political elite of the USA to decide," she added. "Is it again 'Russian hackers' who've broke into State Department servers or does this threat to the information security of the USA come from an American source?"