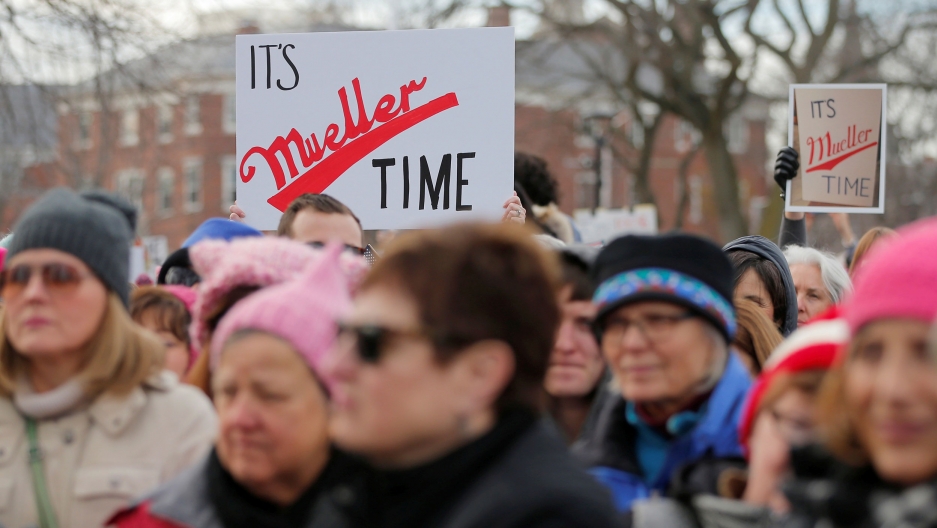 Demonstrators hold up signs referencing Special Counsel Robert Mueller's investigation into US President Donald Trump in a January 2018 file photo. Journalist Garrett Graff said there are at least 17 different investigations involving Trump, many of them being lead by Mueller.

US President Donald Trump faces 17 separate known investigations from at least seven different prosecutors, many led by Robert Mueller, but not all.

Garrett Graff tallied up the details about all 17 for Wired Magazine:

More than two years in, the constellation of current investigations involves questions about foreign money and influence targeting the Trump campaign, transition, and White House from not just Russia but as many as a half-dozen countries. Prosecutors are studying nearly every aspect of how money flowed both in and out of Trump’s interconnected enterprises, from his hotels to his company to his campaign to his inauguration. While President Trump once said that he’d see investigations into his business dealings as crossing a 'red line,' it appears that Trump himself obliterated that line, intermingling his business and campaign until it was impossible for prosecutors to untangle one without forensically examining the other.

Graff talked to us about the investigations.

Garrett Graff: It was an interesting experiment to go through, to trace all of them and add them up because it made me realize that we're probably thinking about this wrong — that we sort of shorthand what the president is facing as "Muller's investigation" or "the Russia probe" and what it actually appears to be when you lay this all out, is a much broader legal assault really unlike something any modern president has seen that is investigating the way that money flowed in and out of every aspect of Trump's organization, his business, his campaign, his transition, his White House across actually a wide number of different countries and how they tried to influence him. Not just Russia but Turkey, Saudi Arabia, potentially UAE, Israel and maybe even others. Really, what this is, is it's a financial investigation. It's not a Russia investigation.

The World: Why is the investigation so multilayered?

This is part of what is so interesting when you pull all of this together. Remember last summer Donald Trump said that he thought that Mueller diving into his personal finances would be a "red line," something which he couldn't stand? What we're sort of figuring out now is that it's Trump's fault that prosecutors are diving this deep into it, that it was Donald Trump who so intermingled all of these enterprises, that it's impossible to examine one without examining the other. And so now you have these investigations not just by Robert Mueller, but by a total of at least seven different prosecutors.

Trump's finances are all over the globe and there's this entirely new branch of the investigation that opened up just the other week — a separate probe on the Middle East that was not a pin on the board before, was it?

It's not something that we've seen Mueller make any public court movements over. But it's something that we've known that he's been interested in all year long. There's been this would-be Middle Eastern power broker named George Nader who Mueller has been working with, who's cooperating with investigators. And that's been ongoing almost this entire year. We know that it's something that Mueller has sustained interest in, and remember, one of the things about the way that Mueller is pursuing this investigation, is it's actually far from a witch hunt. He's pursuing a very conservative legal strategy, where he's been very careful to refer out to other prosecutors any unrelated crimes that he is coming across, which is how Michael Cohen's campaign finance violations ended up in court in New York. So the fact that Mueller has been this interested, for this long, in this Middle Eastern connection, actually lends itself to the supposition that this is somehow related in a pretty direct manner to the core questions about Russia's influence in the 2016 campaign.

You suggested recently that we might be entering the territory of worst-case scenario. What are you getting at?

What we have come to understand over just this period in the last month, is that this investigation is bigger and broader and more troubling than we had been led to believe. The idea that Michael Cohen has now pleaded guilty to lying about the fact that the Trump Tower Moscow project continued well into the 2016 campaign means that the Russian government has known for the last two years that Donald Trump was lying to the American people about the extent of his business dealings in Moscow. And if you're thinking about this case as a counterintelligence case — that is how other countries might be able to leverage the information that they have — that's exactly where we now find ourselves. And that's a worst-case scenario for a head of state.

There is a lot of speculation about the political momentum for Democrats in the new session of Congress when they become the majority in the House. Is there a danger that Democrats could overreach and stir up more support for this beleaguered president?

I think what you're beginning to see, actually, is almost the opposite — Republicans beginning to turn on the president now that they realize that this bargain that they had struck over the last two years where they got tax cuts and federal judges in exchange for looking past Donald Trump's scandals, no longer holds in a scenario where Democrats control at least one of the houses. And I think that the dawning awareness that the president is now in at least one of these investigations — the campaign finance investigation with his hush money payments to cover up extramarital affairs, a literal unindicted co-conspirator of this criminal conspiracy — that's going to weigh on Republicans. And you actually see Democrats so far like Jerrold Nadler, the incoming chair of the House Judiciary Committee who would lead impeachment hearings, taking a very wait-and-see approach on this. He understands that there is a lot more evidence still to come.

It seems to me that the investigations and their revelations are speeding up. Do you think we'll know when the end is in sight or will Mueller continue to slowly release information?

I do think we are entering at least the beginning of the end, that if you look back, Michael Cohen has now pleaded guilty in two criminal conspiracies. He's really a one-man walking Rosetta Stone to the Trump world, which when you couple that with the knowledge that the Trump Organization CFO Allen Weisselberg is also cooperating with investigators, the president is looking like he's facing some pretty serious legal jeopardy from people who know where all of the bodies are figuratively buried. Mueller is pretty clearly laying out some building blocks of a conspiracy and he has long understood that he would be under new political pressure post-mid-term elections. So I think we're going to continue to see pretty rapid developments in this investigation.

With so many different investigations moving so quickly, where are you looking for the next shoe to drop in 2019?

I think we are going to see some movement on things like this Middle Eastern connection but trying to figure out what the next shoe that drops is, I think, overlooks that there are 17 of them. Just the sheer breadth and depth of the legal assault that the president faces is really the most dangerous part of this for him. Even if he is able to escape impeachable or indictable offenses in 16 of those investigations, which seems unlikely at this point, there's still a 17th waiting to catch him.