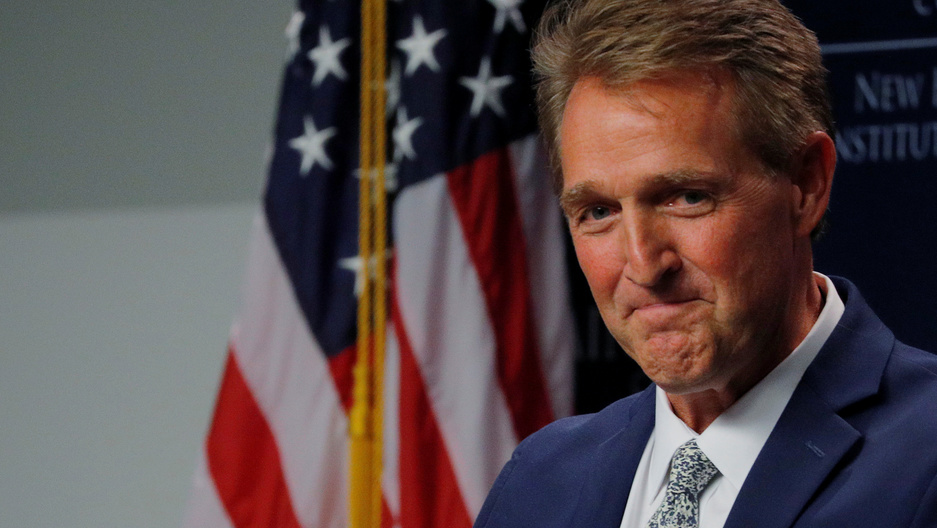 House Democrats on Monday issued subpoenas to the Pentagon and the Office of Management and Budget as part of their impeachment inquiry, requesting documents related to President Donald Trump's decision to delay military assistance for Ukraine.

Trump has lashed out in recent weeks as the impeachment inquiry into his dealings with Ukraine deepens. He has sought to deflect attention from himself, ratcheting up attacks on House Intelligence Committee Chairman Adam Schiff. And on Sunday, Trump tweeted that House Speaker Nancy Pelosi, the top Democrat in Congress, could be guilty of treason and must be "immediately impeached." (Members of Congress cannot be impeached.)

Meanwhile, Republicans in Congress have continued to back Trump, with few showing support for the impeachment inquiry. In a rare show of defiance, several prominent Republicans on Monday opposed Trump's decision to withdraw US forces from Syria.

Former Senator Jeff Flake of Arizona, who chose not to seek re-election last year, has been one of the few outspoken critics of Trump in the Republican party. In an interview with The World, Flake predicted there will be a breaking point for Republican support of the president.

"At some point the Republicans will simply say, 'We can't do this anymore," he told The World. "They'll see support shifting, or they'll just take their role as senator or member of the House seriously and say, 'No matter what the electoral prospects are, we can't defend this in this activity."

Flake spoke to The World's host Marco Werman about how Republicans have viewed the impeachment inquiry and scandals plaguing the Trump administration.

Marco Werman: How many whistleblowers will it take for Republicans to see the reality [of what President Trump is doing]? You must speak with people on the Hill — did they have a number?

Jeff Flake: Well, a lot of them went through the Mueller report thinking, "This will be it," whenever there would be a new revelation, and it just wasn't. Many of them are awfully afraid that this will pass and the president will still be popular and that will put them in a position that is simply untenable. I don't know how in the world you can countenance that kind of phone call and say that there's nothing to see here. For a president to encourage another head of state to investigate this president's political opposition is simply an abuse of power.

Just today we saw three prominent Republicans, Nikki Haley, Marco Rubio, and Lindsey Graham condemn Trump's decision to remove US troops from Syria. Yet still, large silence on the whole issue of Ukraine and potential impeachment. What is that line? What will it take for the party to just move away from Trump?

Well, you can differ from the president on an issue here or there, but something so central as to whether the president is impeached or not is altogether different in terms of what Republicans are willing to do.

Senator Flake, you wrote an op-ed in The Washington Post last week in which you make a distinction between the decision by Senate Republicans to impeach the president and the decision to support his re-election. What is that distinction?

There are many who believe that if there is an impeachment but a failure to convict in the Senate, that it will embolden the president or increase his political longevity. There are really good questions as to whether or not to move forward with this remedy, but there is no excuse, in my view, given what we know as Republicans, to support the president's re-election. That's what just puzzles me; that anybody could say that the president deserves re-election after all this.

Do you really think that's an easy decision? We've seen what happens to senators who "step out of line," like Mitt Romney.

No, it's not an easy decision if you're thinking politically. I mentioned in that op-ed that I am living the consequences. I would have liked to have done a second term in the Senate. But for me I simply couldn't stand on that same campaign stage as the president when he's ridiculing my colleagues or people are shouting, "Lock her up," and expect to just simply smile at that. I couldn't do it. I know that many of my colleagues are troubled by it and uncomfortable and it's awkward, but I hope that in the end they say, "We simply cannot support his re-election." It's not an easy decision, you're right.

What about constituents who want Trump to win in 2020. Isn't it an elected official's job to listen to their constituents?

The interview has been edited and condensed for clarity. Reuters contributed to this report.