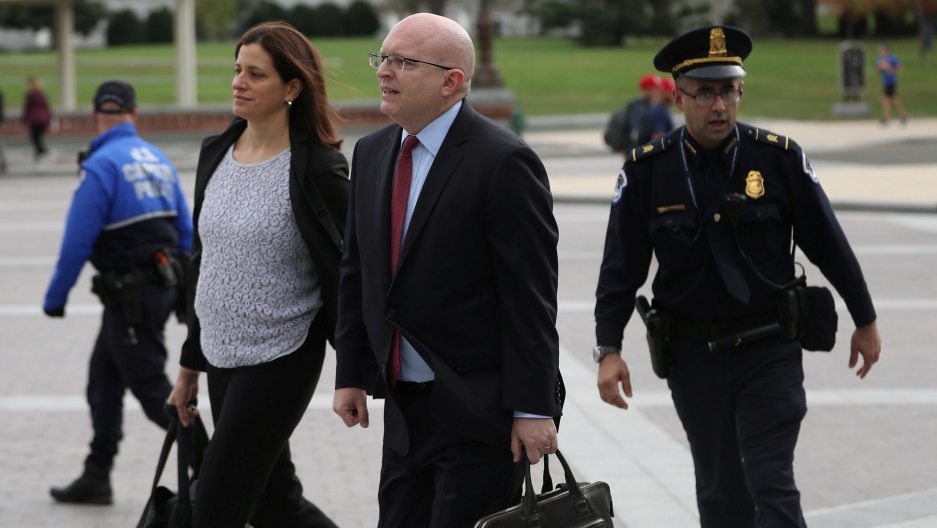 Philip Reeker, US acting assistant secretary of state for European and Eurasian Affairs, arrives to testify in impeachment inquiry against US President Donald Trump, in Washington, Oct. 26, 2019.

Mojib Ghaznawi says that before he was born, American diplomats saved his family.

“I'm sure there are very specific individuals that are part of my story that I've never met,” said Ghaznawi, who is studying at Harvard University's John F. Kennedy School of Government on a scholarship from the US State Department.

US foreign service officers got his family members out of Russia before the collapse of the Soviet Union and Afghanistan during the country's civil war. Ghaznawi was the first in his family to be born and raised in the US.

“I don't take that privilege lightly. And I think that's kind of the beauty of the foreign service; it's the selfless career path. I’ll probably never meet these people that granted the visa stamps to my family to get here.”

“I don't take that privilege lightly,” he said. “And I think that's kind of the beauty of the Foreign Service; it's the selfless career path. I’ll probably never meet these people that granted the visa stamps to my family to get here.”

Over the last few weeks, diplomatic officials have defied the Trump administration by responding to subpoenas and testifying in a presidential impeachment inquiry before Congress. The World asked students from the Harvard Kennedy School and The Fletcher School of Law and Diplomacy at Tufts University to weigh in on how those events might affect their future profession.

The latest State Department official to testify on Capitol Hill was Philip Reeker, acting assistant secretary in the Bureau of European and Eurasian Affairs. He testified Saturday.

Some students worried that sharing their thoughts about those events could put their careers at risk. The handful who agreed to talk each had very personal reasons for choosing the foreign service, like Ghaznawi. And they were resolute, maintaining that they haven’t lost faith in foreign service.

There is still power in being an individual face for the United States around the world, said Carlo James Aragón, a student at The Fletcher School. Aragón is from New Mexico, of Indo-Hispano and Filipino descent, and is fluent in Arabic. Aragon has already served in embassies and said when he meets people abroad, it changes the way they view Americans.

“People can start to see people of color representing a very powerful nation,” he said.

That’s why being a diplomatic officer is worth it to him, even though he knows that he most likely will simply have to follow orders from Washington.

“In diplomacy, we are asked to sort of carry out the wishes of the administration and we will. But if we aren't able to, if we find a point that we're unable to ethically carry out, morally carry out these commands, then we have the responsibility to recuse ourselves or resign.”

“In diplomacy, we are asked to sort of carry out the wishes of the administration and we will,” Aragón said. “But if we aren't able to, if we find a point that we're unable to ethically carry out, morally carry out these commands, then we have the responsibility to recuse ourselves or resign.”

Or, perhaps testify in Congress. Current events have Aragón and other students thinking about their own so-called “red lines” — points at which they, too, would choose loyalty to the Constitution over loyalty to a president.

“So, I think what they're learning and what we're trying to teach them is to gird themselves to think about ahead of time what are their red lines, what is their ethical code,” said Monica Duffy Toft, director of the Center for Strategic Studies at The Fletcher School.

She said they’re teaching students to thoroughly understand the agencies they’ll serve, and their rights and responsibilities.

“So, maybe this generation going in will say, ‘Well, we'll fight back maybe a little bit sooner than what we've seen so far,’” Duffy Toft said.

But these diplomats-in-training may not have the same amount of guidance that past generations have had. Duffy Toft says the State Department has been “hollowed out” — in other words, many senior staff have left, and their positions remain unfilled.

Still, what some people see as a crisis, others see as democracy at work. Marina Kusumawardhani, a student from Indonesia at the Harvard Kennedy School, said Americans should be grateful for the process playing out before Congress.

“It just shows how healthy American democracy is,” she said.

Fellow Harvard student Hainer Sibrian agrees. His parents are from Mexico and El Salvador. He points out that there are ways to voice dissent within the confines of the job. He recalls that when Thomas A Shannon Jr., former State Department undersecretary for political affairs, spoke to the students, “he said the State Department, as a civilian agency, is an agency of debate,” Sibrian said.

But the students acknowledge they don’t really know what kinds of situations they’ll face.

“I just have a personal philosophy of not worrying until you have to,” Ghaznawi said.

And, he said, this moment could be an opportunity.

“With so many people leaving [the State Department], they have to be replaced and those positions have to be filled. And so, the work is even more pertinent now than it ever was before. And it just motivates me to to get in as quickly as I can and do the work.”

“With so many people leaving [the State Department], they have to be replaced and those positions have to be filled,” Ghaznawi said. “And so, the work is even more pertinent now than it ever was before. And it just motivates me to get in as quickly as I can and do the work.”