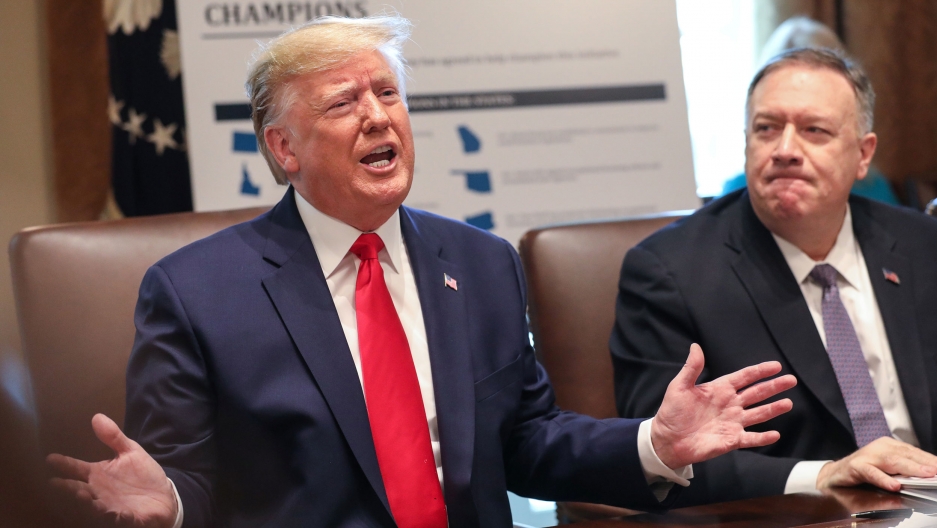 US President Donald Trump speaks next Secretary of State Mike Pompeo during a Cabinet meeting at the White House in Washington, DC, Oct. 21, 2019.

It has been a whirlwind week of impeachment and Ukraine news.

On Tuesday, Bill Taylor, acting top US diplomat in Ukraine, offered damning testimony to House investigators in the impeachment inquiry into US President Donald Trump. In his opening statement, Taylor said, “I became increasingly concerned that our relationship with Ukraine was being fundamentally undermined by an irregular, informal channel of US policymaking and by the withholding of vital security assistance for domestic political reasons.”

Marco Werman: Let's start at 35,000 feet. If you could put it into one sentence: What's the central concern of constitutional scholars and lawyers like you, Teri, with the conduct of this administration in this affair? What is it?

Teri Kanefield: The overarching issue is public corruption and a United States president trading foreign policy for his own personal gain.

If it's not so obvious, I mean, why is that a big deal?

Kanefield: Why is that a big deal? To begin with, the framers of the Constitution were particularly concerned about a president being beholden to foreign interests or a foreign government interfering in the United States. Basically, when we have an election, we want the American people to vote for the president. We don't want foreign governments to be selecting our president. And when the president of the United States conducts foreign policy, we want the president to be conducting foreign policy for the good of the nation, not for his own personal interests.

So, it's corruption intersecting with foreign policy. Ambassador McFaul, what's your overriding concern?

Michael McFaul: Well, the same thing. The use of a public office for private gain. That's the essence of what happened here. And let's spell that out with a few more specifics. What President Trump and his team did, his "three amigos," as they've been referred to, and Mr. Giuliani and other lieutenants that they hired to do this, they tried to get the Ukrainian government to investigate alleged corruption by Hunter Biden, Vice President Joe Biden's son, as a way to gain leverage and something to use in the 2020 election.

They also want them to investigate alleged Ukrainian interference in the 2016 election. And in return for that, the quid pro quo was that they would lift the freeze that they put on military assistance to Ukraine and they would give President [Volodymyr] Zelenskiy a meeting in the Oval Office. So, it was a trade of something public that has to do with American national security for President Trump's personal reelection efforts.

Kanefield: You mentioned quid pro quo. Just asking the Ukrainians to conduct the investigation is a legal violation.

A lot of commentators are singling out the testimony this past Tuesday of Bill Taylor, the acting ambassador to Ukraine, as especially significant. Some saying, you know, a smoking gun. What have you heard, and why is that?

McFaul: Well, so first of all, I've known Bill Taylor for three decades. I want to fully disclose that. I worked with him a bit and interacted with him over decades of work that he's done. And he's done all kinds of jobs for the United States government for over 50 years, first as an infantryman in Vietnam. And that matters. That gives him a lot of credibility in my world. He's worked for Democrats and Republicans, and he was appointed to be our ambassador in Ukraine back in 2006 under President George W. Bush.

What Bill did is he just very meticulously outlined what the scheme — I'm not going to call it a quid pro quo — ... I'll actually use what John Bolton, former national security adviser, called it. He called it a drug deal. When Taylor saw what was going on when he was asked to become our acting ambassador to replace, by the way, the former ambassador, Marie Yovanovitch, who was pushed out by Mr. Rudy Giuliani because she was trying to block this very "drug deal," he said, "Well, I'm not going to have any part of it."

And he then spelled out in his public testimony that we've now read exactly what they were trying to do. And by the way, it's clear to me, as lots of foreign service officers are trained to do, that he took meticulous notes throughout this play. So, he has actual quotes of the various players here that he then presented before the committee. And that's why I think his testimony has been so damning.

The president and his team are pushing back on a number of fronts, and particularly, they say every president uses private back channels to conduct foreign policy. What is wrong inherently with Trump using Rudy Giuliani, for example, as, you know, an emissary for one of those back channels?

McFaul: I served in the government for five years; I don't remember a single back channel person that we had. And, you know, every now and then presidents deputized somebody for hostage crises or things like that. But it's just not true. And in fact, what you have in the Trump administration is, you know, they're going around the normal channels of government precisely because they know that they're doing things that the rest of the government will not support.

What are the dots to connect between what's going on with the impeachment inquiry and looking into these ties to Ukraine and this news yesterday that the DOJ is going to launch this criminal inquiry into the origins of the Mueller investigation? Are there dots to connect?

Kanefield: It's a distraction, and it's an attempt to create an alternate narrative. So, what's coming out of Taylor's testimony is very devastating to the president. Taylor documented — and backed it up with corroborating evidence — that, in fact, the Trump administration was behaving corruptly in Ukraine. And so, by launching a criminal investigation against somebody else, it's a way of saying, "No, no, no. They're the bad guys," which is a way of saying, "Well, we're all corrupt, so you may as well stick with your homegrown corrupt official instead of the enemy corrupt official." It reduces politics down to teams, us versus them.

So, a final thought from you both, one or two words describing what you'll both be looking for in the coming week.

Kanefield: I think one of the reasons why I think the Republicans are very frustrated right now is because they don't know what's going on behind closed doors. And so, they're not able to, in their words, they're not able to get their messaging targeted. Messaging, spin, you might say. And so, they're flailing right now. And I'll be looking to see when the public hearings begin what happens. What then the strategy will be in response to whatever happens with public opinion once the public hearings begin, which should be soon.

McFaul: Well, I don't actually think we need any more information. I think we don't need to hear from the whistleblower. It'll be nice to have bits and pieces filled in by other people testifying, Tim Morrison, for instance, from the National Security Council, is set to testify next week.

But I think the facts here are clear as day. The president used his public office and taxpayer money as a way to leverage dirt on his Democratic challenger. And then he dragged a bunch of US government officials into it and then tried to conceal his actions. That's the story. Whether it's an impeachable offense or not, that's not an area that I claim expertise in. But that it was wrong, that it should not happen, I think is clear.

I hope people just keep focusing on that core thing that happened that is indisputable and not get lost in the weeds about these various things that have been happening. And that's why you, Marco, rightly wanted to say at the end of the week, let's go to 30,000 feet. That's the story at 30,000 feet. And the only question moving forward to me is are there Republican senators — because I think the president will be impeached — are there Republican senators that believe that that so-called drug deal was an offense that demands the removal of the president.