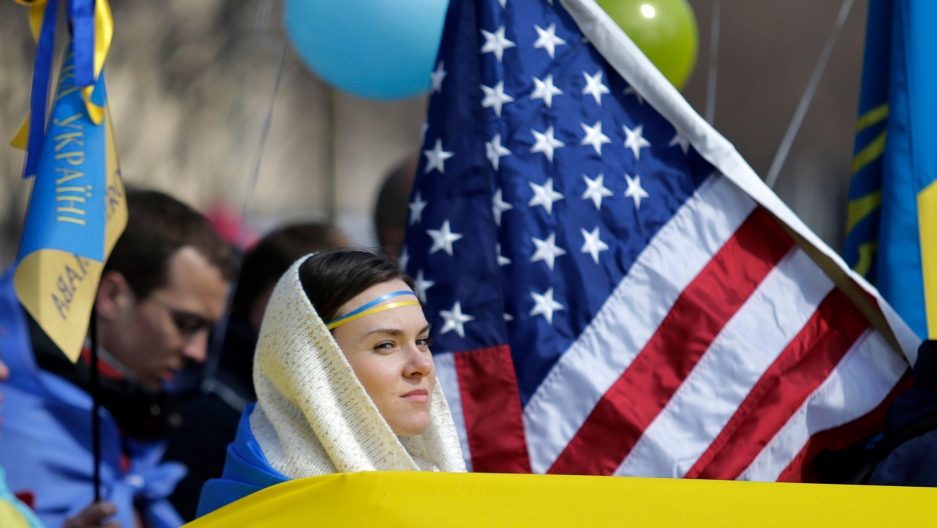 A woman is shown surrounded by Ukraine and United States flags during a protest against Russia's aggression in Ukraine in Lafayette Square across from the White House in Washington, DC, March 6, 2014. Ukraine's then-Prime Minister Arseniy Yatsenyuk said that a decree making Crimea part of Russia was an illegitimate move and Crimea was and will remain an integral part of the country.

Ukraine remains the focus on Capitol Hill as the impeachment inquiry continues.

But there is much more to the US-Ukraine relationship than what is being covered in the impeachment inquiry.

The two countries have been strengthening bilateral relations since the Soviet Union collapsed in 1991. That partnership is now being tested like never before.

Nina Jankowicz is the disinformation fellow at The Wilson Center in Washington, DC. As a Fulbright fellow in Ukraine, she advised the Ministry of Foreign Affairs. The relationship between the two countries has been one of friendship and support for a long time, she told The World's Marco Werman.

Marco Werman: How would you characterize the relationship between the US and Ukraine in the past, as opposed to now?

Nina Jankowicz: For the past 30 years, the United States has been one of the loudest voices for democratic reform in Ukraine. We've provided a lot of financial assistance, not only military as is involved in this unraveling scandal, but democratic support.

And we've also provided important rhetorical support for Ukraine, especially over the past five years as it's been in conflict with Russia since the illegal annexation of Crimea that Russia carried out in 2014. We have been one of the loudest voices on sanctions and have pressured the Europeans to keep those sanctions up. But most importantly, that rhetorical support sends a signal to Russia that this unilateral changing of the borders of Europe for the first time since World War II is not something that the international community is going to stand by and abide.

It seems like Ukraine benefits from the US more than US benefits from Ukraine. Is that fair? I mean, how does Ukraine help the US?

I would vehemently disagree with that. I think Ukraine plays a really important role in the security situation in Europe. As I mentioned before, there is a hot war going on in Ukraine that has claimed 13,000 lives and they are essentially keeping Russia at bay.

Also, you know, Ukraine plays an important role in the democratic development of the entire post-Soviet space. They have just had a really important election, this presidential election that brought in President Volodymyr Zelenskiy that many of my friends and colleagues in Russia and other former Soviet countries were saying, "When are we going to have an election like that?" It's a role model for the rest of the space, increasingly over the past five years. And I think that's an important investment that the United States needs to make and one that until recently has never been called into question.

Also from Nina Jankowicz: This Ukrainian candidate is challenging language divisions in runoff

So what does this impeachment inquiry mean for the relationship between the US and Ukraine? This daily drumbeat of nefarious stuff going on between Washington and Kyiv?

Well, in some ways, it hasn't changed at all on the Ukrainian side because Ukraine continues to rely on the US for that monetary support, for that rhetorical support. But I think what has changed is that the word of the United States can no longer be taken at face value. We've seen an incongruence between what our career diplomats, our appointees say and then what comes out of the White House.

Nina, you're in touch with people on the ground in Ukraine. What are they telling you about their reaction to this whole story?

I think, Marco, since the election of President Trump, they've been worried and cautious because President Trump, from the very beginning of his presidential election campaign in 2016, cast doubt about Ukrainian sovereignty, cast doubt on whether Crimea should be a part of Ukraine or part of Russia. And make no mistake, US foreign policy says that Crimea is undoubtedly part of Ukraine and we are never going to recognize the illegal annexation of Crimea by Russia. So that was a worry from the very beginning of the Trump administration.

But it's important to note that Ukraine has a lot of other issues on the table that the United States ought to be there helping the new administration navigate. President Zelenskiy is about to go into negotiations with President [Vladimir] Putin and some of the European leaders about a ceasefire and a ratcheting down of hostilities in the east. Ukraine could really use a helping American hand and instead, they're being dragged into our own political battles right now.

"Ukraine could really use a helping American hand and instead, they're being dragged into our own political battles right now."

Yesterday, Bill Taylor, the chargé d'affaires at the US embassy in Ukraine, testified as part of the impeachment inquiry against President Trump. Stunning testimony, according to many who were there. You said on Twitter, Nina, that the testimony made you angry. Why is that?

Well, you know, I was inspired to apply for the Fulbright fellowship that I did in 2016, 2017, because of the protests on Maidan. In 2014, a hundred people were killed by snipers that the Yanukovych administration put out there to try to quell those protests. And since then, you know, 13,000 people killed in this war, ostensibly for democratic values, for that right to self-determination. So I went into my work in Ukraine for those democratic values, and they were bolstered by going to work everyday with my Ukrainian colleagues.

So when I look at Ambassador Taylor's testimony, I'm thinking about not only the people whose lives are in danger because of that hold on the aid, but I'm thinking about what that does to their support for democratic values. Right? They've been out there on the front lines, literally and figuratively, for the past five years. And the United States should be out there supporting them. That is what our country was founded on. And it's until recently guided our foreign policy in Ukraine and the rest of the post-Soviet space. And I'd like to see a return to that.