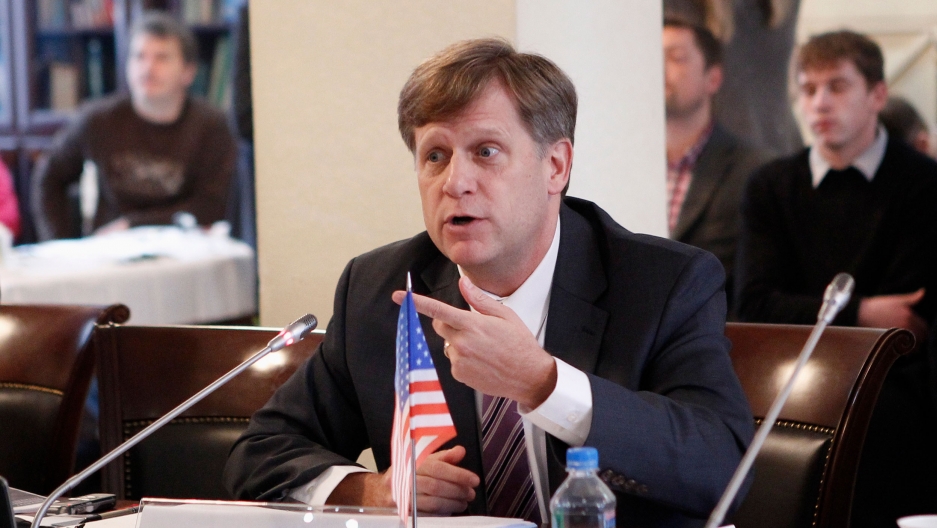 Under President Donald Trump, the practices of US diplomacy seem to be getting more and more unusual.

EXCLUSIVE: I have obtained a copy of ⁦@realDonaldTrump⁩’s letter to #Erdogan. ⁦@POTUS⁩ warns him to not “be a tough guy! Don’t be a fool!” Says he could destroy Turkey’s economy if #Syria is not resolved in a humane way. Details tonight at 8pm #TrishRegan #FoxBusiness pic.twitter.com/9BoSGlbRyt

But according to former US Ambassador to Russia Michael McFaul, the problems with diplomacy runs deeper. American diplomats are too often inexperienced political appointees — an issue for both Republican and Democratic administrations.

On Thursday, EU Ambassador Gordon Sondland told Congressional investigators that Trump directed diplomats in Ukraine to work with his personal attorney Rudy Giuliani to investigate Vice President Joe Biden. Sondland is one of the "three amigos" the White House directed to unofficially run Ukraine policy after the ouster of career diplomat Marie Yovanovitch. Sondland is also a hotel magnate from Portland whose companies gave $1 million to Trump's inauguration.

McFaul says there's a big difference between novice political appointees and experts or career diplomats when it comes to guiding American foreign policy in American interests. Now a professor of political science at Stanford University, he spoke with The World's Marco Werman about the dangers of political influence in American diplomacy.

Marco Werman: Gordon Sondland is not a career diplomat. He's a businessman who made a large donation to a presidential campaign. Ambassador, how unusual is it for someone like that to become an ambassador?

Michael McFaul: It's not unusual, unfortunately. We have lots of political appointees who are ambassadors, and many of them got those positions by giving large financial contributions to presidential candidates and, in his case, to the inauguration party, where I understand he gave a million dollars.

Tragically and wrongly, in my view, Democrats and Republicans have been doing that for many decades. And I think the case of Ambassador Sondland kind of underscores why that's not such a prudent policy, because you have people like him that don't understand foreign policy, who are out of their depth of expertise. And in this case, you know, maybe involved in something that's illegal.

But how often do politically-appointed ambassadors get sent to sensitive posts like the EU, where Sondland was sent, where real foreign policy chops are required?

But I had worked three years at the White House, the National Security Council. I'd worked most of my life on US-Russian relations, published lots. So there is a category like me who are experts, who are also political appointees. But the vast majority of political appointees are donors with almost no foreign policy experience. And I think that practice needs to stop.

I mean, they're not just involved in policy. Sondland is also involved allegedly in this attempt to smear Joe Biden. He told the impeachment inquiry in the House on Thursday that Trump himself directed diplomats to work with his personal attorney, Rudy Giuliani, on the Biden issue. How significant do you think that is?

Well, if it's true, it's it's very significant and very wrong. And I appreciate that Ambassador Sondland is now telling the truth about it. But it's also clear as day to me, given that the text of his conversations with other ambassadors from last week that were released after Ambassador [Kurt] Volker testified, that that he went along with this scheme. You know, Ambassador [Bill] Taylor, somebody who's been a public career government official for three decades, very clearly said in those texts, I'm not going along with this scheme. And I think that shows the difference between career ambassadors — those who have worked in the State Department for decades and those that purchased their position, you know, during an inauguration party for President Trump.

Related: Turkey agrees with US to pause Syria assault while Kurds withdraw

I want to turn — still on the diplomacy tip — to this letter that got leaked yesterday from Donald Trump to Turkey's President Recep Tayyip Erdoğan, dated 9th of October, the day of the Turkish incursion. The final lines are, "Don't be a tough guy. Don't be a fool!" Trump said, "Let's work out a good deal. I don't want to be responsible for destroying the Turkish economy." How common is that kind of language in diplomatic correspondence?

Well, to the best of my knowledge, I don't think there's ever been a letter like that written by the president of the United States. You know, I worked at the White House for three years. I wrote some letters for President Obama to other leaders. Generally, that's how it works, by the way. The national security staff does the first draft of those letters. It then gets "chopped," is the verb — edited by senior people before it reaches the president.

And that language is shocking. Extraordinary. And, by the way, makes our president look extremely weak. I don't understand what objective is being secured by that letter.

Moreover, Marco, I think it really underscores the breakdown of standard operating procedures when it comes to the making of American foreign policy and in its implementation. Both the Ukraine story and now this story, and this letter just underscores it's broken. The interagency process is not working. The president is not sitting down there in the White House Situation Room with the secretary of defense, with the secretary of state deliberating on the policy, ... they're just implementing it in a rather ad hoc way. I'm being diplomatic there by using that adjective. And what suffers is American national interests. This improvisation, privatization, personalization of American foreign policy is not advancing our security interests.