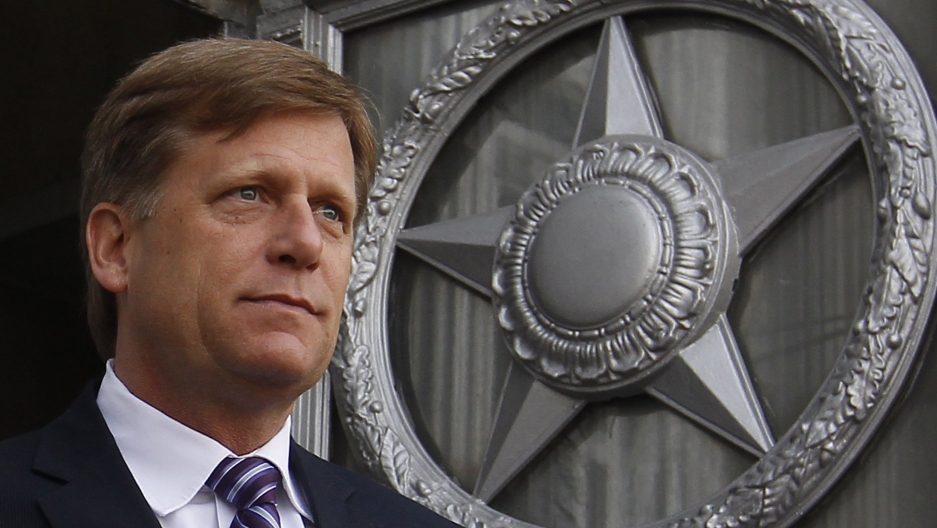 Russian President Vladimir Putin will not be in attendance when world leaders gather in France for the G7 summit this weekend.

Russia used to be a member of the international bloc when it was the G8. But Russia was pushed out of the group in 2014 after violating territorial sovereignty and annexing the Crimean peninsula from Ukraine and invading Eastern Ukraine.

But US President Donald Trump doesn't agree with keeping Russia on the sidelines of the summit. He said he would support Russia rejoining the group, speaking to reporters in the Oval Office earlier this week.

"I think it's much more appropriate to have Russia in," Trump said. "It should be the G8 because a lot of the things we talk about have to do with Russia. So I could certainly see it being the G8 again and if somebody would make that motion, I would certainly be disposed to think about it very favorably."

Michael McFaul was the US ambassador to Russia during the Barack Obama administration. He spoke with The World's Marco Werman about the future of Russia and US national interests.

Marco Werman: So I want to start by getting your take on what President Trump had to say about Russia and the G7. I mean this is not the first time Trump has made the suggestion. What do you make of it?

Michael McFaul: Marco, I honestly don't understand it. I don't understand what national security interest he is seeking to advance by making that statement. Obviously, the rest of the G7 is not going to go along with it. There was a reason that Vladimir Putin was kicked out of the G7. He invaded Ukraine, he annexed Crimea and that was part of the punishment and he showed no signs of leaving Ukraine. But secondly, I don't even understand what he thinks he's accomplishing with Vladimir Putin. Vladimir Putin has made no signals that he wants to join the G7 or G8 again. And I just think it makes the president of the United States of America look weak.

Related: Learn how to be a spy from previously unpublished KGB training manuals

President Putin sat down with French President Emmanuel Macron earlier this week and floated the idea of Russia rejoining the group, but with some conditions — conditions that Macron suggested, namely that there needs to be movement to end the conflict in Ukraine. So are you opposed to an invitation to join the G7 with some conditions?

No, I'm not opposed to that. Not just some conditions — necessary conditions — and I'm not optimistic that Putin would meet them. And I want to remind your listeners, Russia joined the G7 when Russia was on the road to becoming a democracy and integrating into the West. And for several years now they've been moving in an opposite direction. So if Russia, for some reason, after the Putin era would move back towards embracing democratic ideas and enhancing democratic institutions and integrating into the West, that's the right time to have that conversation. But just to bring them back in without them changing their behavior — I don't think that serves America's national interests.

Speaking of American national interests, there have been all these attempts over the past 20 years under Putin at resetting diplomatic relations with Russia. Mostly they have seemed to fail, including under Obama when you were ambassador. Why?

Well, Marco, I see that history a little more with a lot more variation. I don't think it's been consistent failure. In the first years of the reset between President Obama and President [Dmitry] Medvedev — right, it wasn't President Putin — we accomplished concrete things. We signed the new START Treaty, getting rid of 30% of the nuclear weapons in the world. We got new sanctions — multilateral sanctions — on Iran. We got new supply routes to Afghanistan. All of those things — it's not about good relations, bad relations. I think this is a big misunderstanding about diplomacy. Obama engaged Medvedev to achieve concrete outcomes that President Obama believed were in America's national interest. And when we look today to President Trump's engagement with Putin, I'm hard pressed to think of one concrete outcome as a result of the "happy talk" that the two of them have now that has been good for the United States.

So take the Medvedev relationship out of the mix. Do you think the answer to why several resets — maybe not all of them — have not succeeded ... is Putin?

Yes. I think a lot of it is about Putin's mindset. Fundamentally, he believes that the United States is an enemy of Russia. He believes that the United States is out to thwart Russian power and violate Russian sovereignty. You know, I dealt with him up front and personal on this. You know, if you have that mindset about us, it's very difficult to find win-win outcomes in dealing with Putin right now.