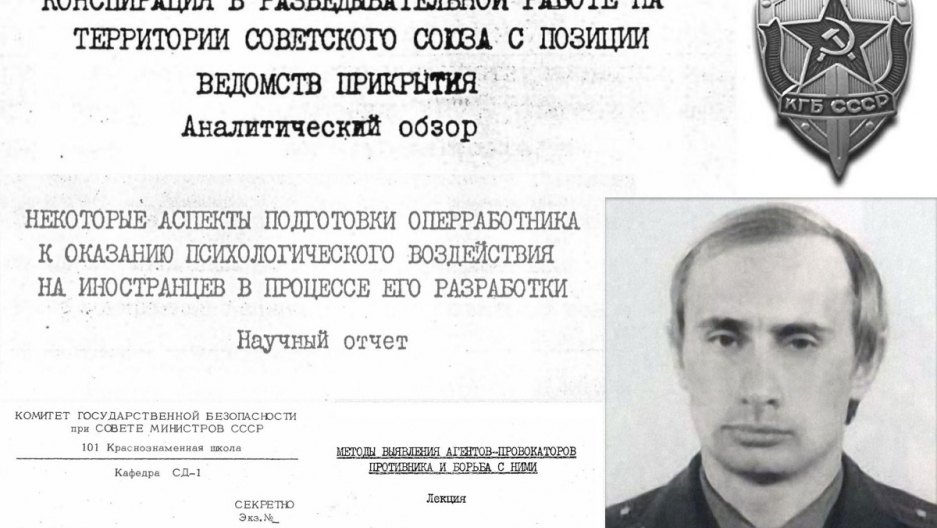 "The Lyubanka Files" translation project aims to be a "living history" of the Cold War, relying mostly on primary sources.

Ever wanted to try your hand at espionage?

If you have, Michael Weiss hopes that his translations of unearthed KGB training manuals once used to prepare Soviet intelligence officers may be just what you're looking for.

Presented by The Interpreter, a daily translation and analysis journal that focuses on Russia, "The Lyubanka Files" translation project will dive into Soviet Russia's history of espionage, subversion and subterfuge.

Related: You can take selfies with once-secret KGB spycraft at this NY museum

These never-before-published documents, which date from the 1970s and '80s, come with titles like “Opportunities for use of Psychological Methods" (1988), “Some Aspects of Training of Agents and Psychologically Influencing Foreigners” (1985), and “Exposure of Disinformation in Intelligence Materials” (1968).

The manuals are still classified in modern Russia "because of their continued curricular use in teaching tradecraft to Vladimir Putin's spies at Russia’s domestic and foreign intelligence academies," according to Weiss' GoFundMe campaign.

Dig into the documents, and you'll find lots of how-to guides, including information on "how to recruit and psychologically manipulate agents on Western soil," "how to root out enemy disinformation schemes, "how to infiltrate international scientific gatherings to recruit agents" and "how to outflank suspected agents provocateurs."

On Wedneday, former special counsel Robert Mueller's testified before US Congress about Russian interference in the 2016 elections. Weiss says the methods Mueller outlined are still used today to undermine the United States and European countries.

Related: Florida steps up election security in preparation for 2020

The manuals, presented in English and Russian, will feature alongside a spy exhibition with audio footage from former intelligence officers and video documentaries of old Cold War spy dramas.

Weiss says that what's most important to him about this project is what it says about the tradecraft of human intelligence. He says the KGB was masterful at understanding the pressure points, vulnerabilities and vices that went into running spies and agents: "A KGB case officer was a combination of a priest, a therapist, a best friend and also a mortal enemy. He was somebody who was trying to get you to do things that would ultimately destroy yourself whether professionally or personally."

"A KGB case officer was a combination of a priest, a therapist, a best friend and also a mortal enemy. He was somebody who was trying to get you to do things that would ultimately destroy yourself whether professionally or personally."

"They're not just historical relics which give us an insight into what used to happen during the Cold War. ... They're still classified in Russia because they're still in use today in the FSB and SVR academies, the academies that train up domestic and foreign intelligence operatives."

Weiss, editor-in-chief of The Interpreter, sat down to talk more about his KGB spy manual translation project with The World's host, Marco Werman.

Marco Werman: You're raising money through GoFundMe to translate and publish these manuals. Who is your intended audience?

Michael Weiss: Everybody, really. When I got my hands on these things, and I thought, "Oh, well this is interesting," my first instinct was to just put everything out there in Russian. But then I thought, "Look, we're in the midst of a kind of spy mania. From what I can see, the sensationalism, the "gosh, wow, factor" of it all, tends to obscure the more ho-hum and frankly absurd elements that go into espionage and that have always gone into espionage.

Let's get to the specifics of what's in these manuals. There's one manual that explains how to expose disinformation campaigns that other countries may use against the former USSR. Explain what that's about.

"I always said that to understand the Russian services, it's really a matter of Freudian projection. They always are guilty of doing that which they accuse their opponent of doing."

All countries lie. They do propaganda, and they put out what is colloquially known as fake news now. The Soviets were much, much better at doing this than we ever were. You all have seen things such as Operation Infection, which was a campaign to try and convince particularly the third world that the CIA invented the AIDS virus as a means of population control. I always said that to understand the Russian services, it's really a matter of Freudian projection. They always are guilty of doing that which they accuse their opponent of doing. So, there's a manual in here which talks about spotting American acts and campaigns of disinformation. In other words, if the US government says X, well they're lying and they're lying for a particular reason, they want us to be duped into thinking that X is the reality — when in fact, it's Y.

Related: Ambassador Huntsman: US-Russia estrangement 'has gone on too long'

"It's about reading people, understanding what their weaknesses are, learning how to recruit them, how to get them to do things they otherwise would not be willing to do."

There's a phrase in Russian "working with people" — which is really all KGB case officers. Remember, Putin himself was a KGB case officer, and so when people try to understand his psychology, the way he thinks about geopolitics, he's always looking to manipulate the human side of things. It's about reading people, understanding what their weaknesses are, learning how to recruit them, how to get them to do things they otherwise would not be willing to do. The continuity between the past and the present, I think, is very starkly demonstrated with these manuals. The first batch that I did two years ago, there were things like how to run American agents in the third world, meaning recruiting secretaries from American embassies and consulates; how to recruit Middle Eastern officials who are working for regimes that might be neutral or pro-American; how to penetrate Russian diaspora organizations.

Related: How to avoid accidentally becoming a Russian agent

Yes. So, what does it say about how to recruit an American secretary in an embassy? Are there step-by-step instructions?

Yeah, here's where it gets kind of amusing and perhaps we're trapped in a 1960s or '70s framework — or maybe not. Their idea of American foreign service types is everybody's having affairs, everybody is fast and loose, everybody is an alcoholic. But you know, keep in mind, too, the hostility with which they approach the American ethos in these books.

These are old manuals from the '60s, and they're classified still today in Russia. Are the methods still part of Putin's playbook, and how would we even know?

They are indeed still classified, and the reason being is that they are in circulation. Channel 1, which is the most popular state-run news channel in Russia — this was several months ago — they did a whole documentary on the SVR (Russian Foreign Service). This documentary featured the director of the SVR going around and meeting with cadets, officers who are who were undergoing training, and on the desk in one of the scenes was — I couldn't tell if it was one of the specific manuals that I've got — but it was very much of that genre. So, it goes to show, they're still dipping into their own archives to deal with this stuff.