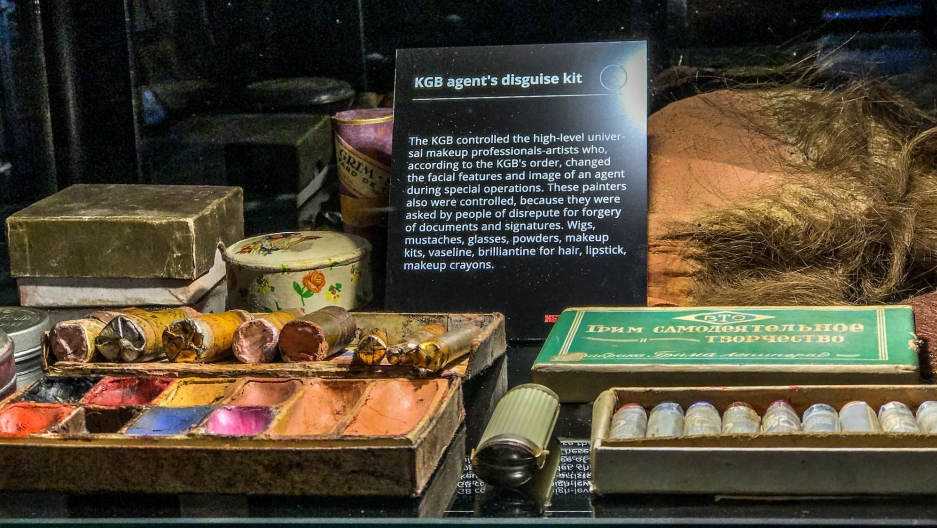 A KGB agent disguise kit. In the Soviet era, master make-up artists were just as sought after by the secret police as optical specialists and cryptologists.

It’s been almost 30 years since the KGB officially ceased to exist, and yet its name remains as synonymous with spycraft as that of James Bond’s.

Aside from a few Cold War flare-ups, a handful of high-profile assassinations and Russian President Vladimir Putin’s well-documented time in the KGB, what do we really know about the Soviet regime’s infamously brutal secret police? Not a lot.

This isn’t surprising: The KGB guarded the tools of its trade with the same ferocity as the nation’s nuclear secrets. But now, some of the esoteric secrets of the Soviet secret police are on display in Manhattan’s Chelsea neighborhood.

The KGB Spy Museum is the brainchild of Julius Urbaitis, a lifelong collector of historic military paraphernalia and his daughter Agne Urbaityte, who identifies herself as a “secret telephone communications and cipher machines expert.” The father-daughter duo opened their first museum five years ago in an atomic bunker in Kaunas, Lithuania, but the New York offshoot, Julius says, is far larger and more comprehensive; many of the artifacts on display have never been available to the general public.

James Bond fans will find much to delight in here. The museum is filled with dramatic set pieces; a KGB office with a safe stuffed with Soviet-era rubles to pay off spies, a pair of authentic prison doors and 40s-era NKVD (the precursor to the KGB) trench coats available for selfies. 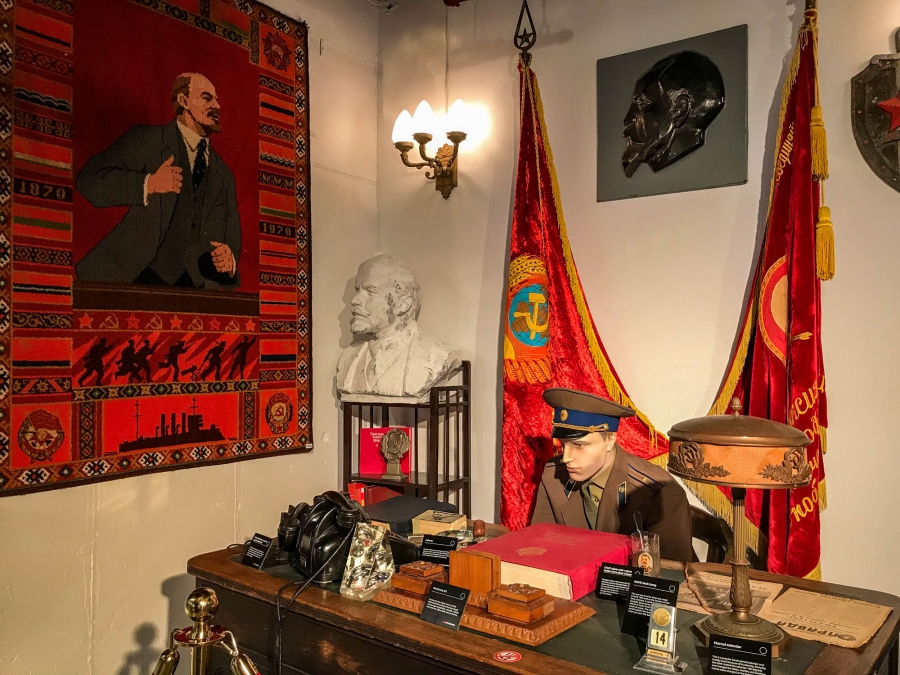 The museum’s recreation of a KGB office doubles as a Soviet time capsule, down to the iconic “perpetual” desktop calendar (a staple for Soviet citizens) and a copy of the Communist newspaper, Pravda. 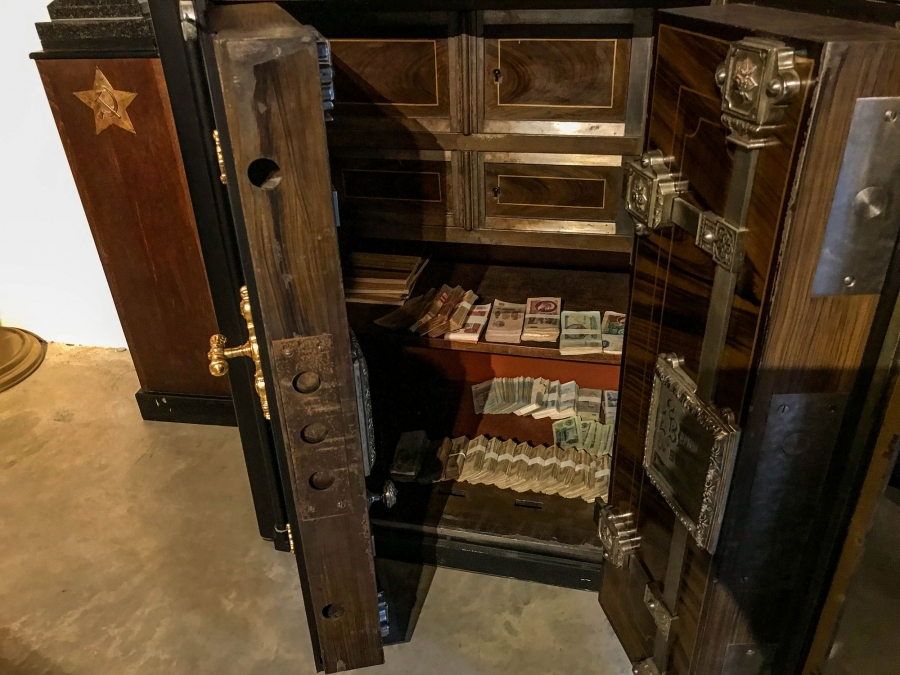 The office also includes a safe filed with 140,000 in Soviet-era rubles used to pay spies. This was fortune in Soviet times — enough to buy 30 cars — but today is worth about $2,000. 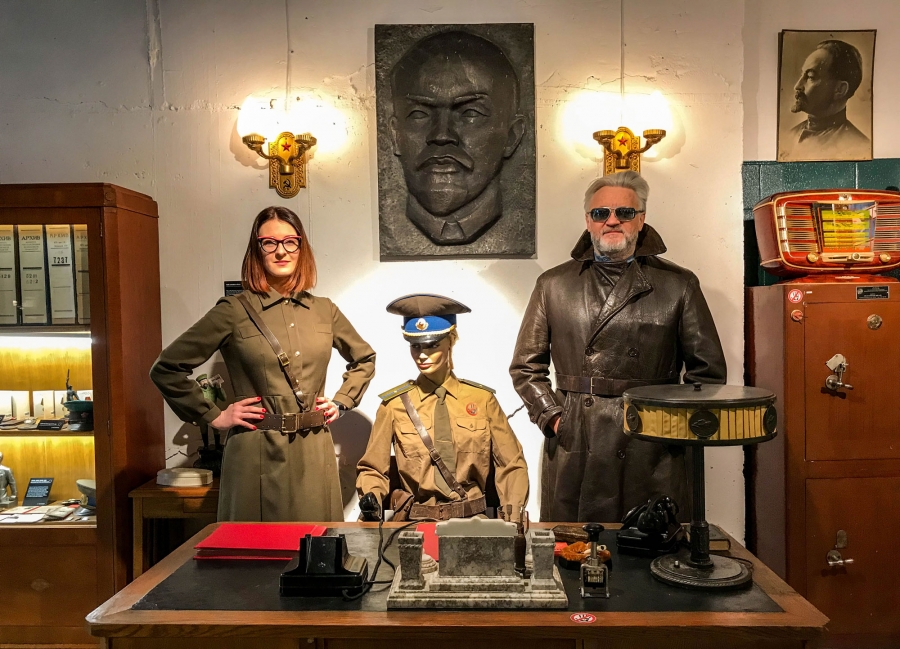 Father-daughter curators Julius Urbaitis and Agne Urbaityte pose by the desk of a KGB duty officer wearing vintage military attire. Urbaitis is wearing an authentic leather trenchcoat that once belonged to an officer of the NKVD (precursor to the KGB). It weighs about 30 pounds and could probably ward off a knife attack, he says. 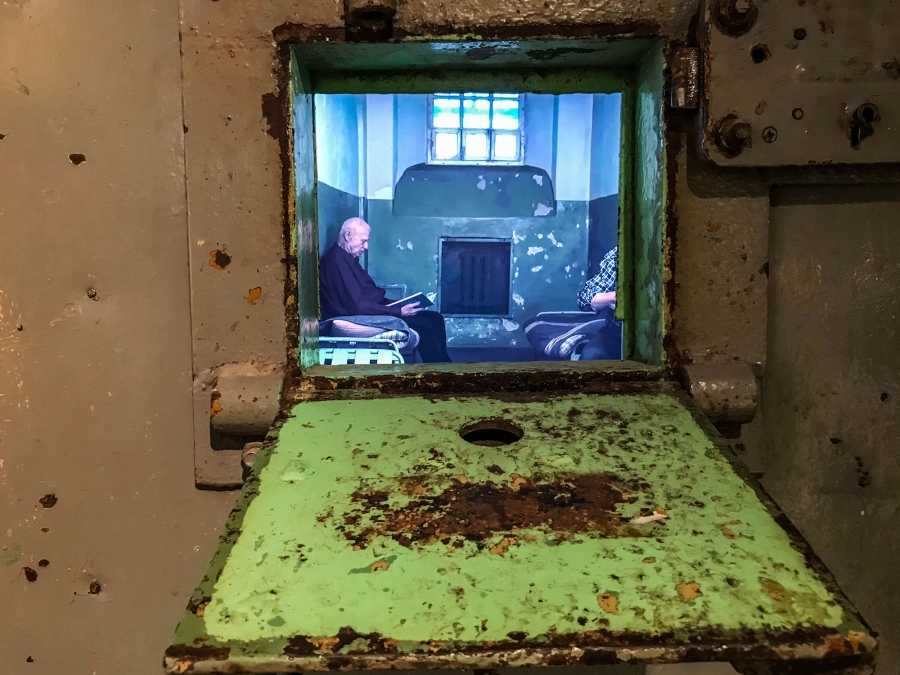 The tiny cellblock windows of these Soviet prison doors have been replaced by screens playing video re-enactments of prison life. 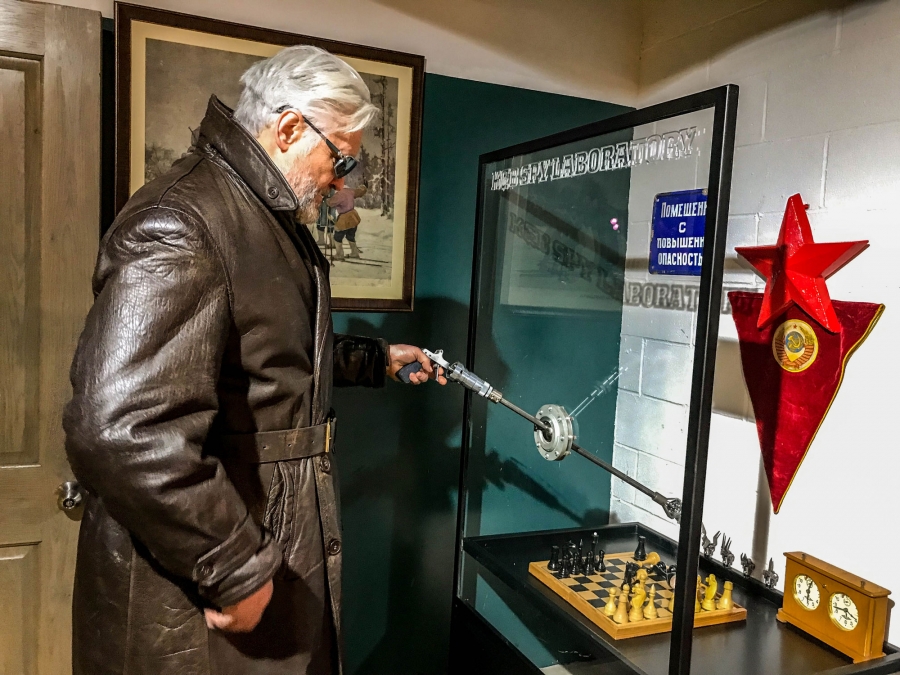 Despite the veneer of Soviet kitsch, Kremlinologists and serious historians won’t be disappointed. After the Soviet Union fell apart and Russia went into economic freefall in the 1990s, the Komitet Gosudarstvennoy Bezopasnosti, (soon re-branded as the Federal Security Service, or FSB in Russian) fell into disarray. 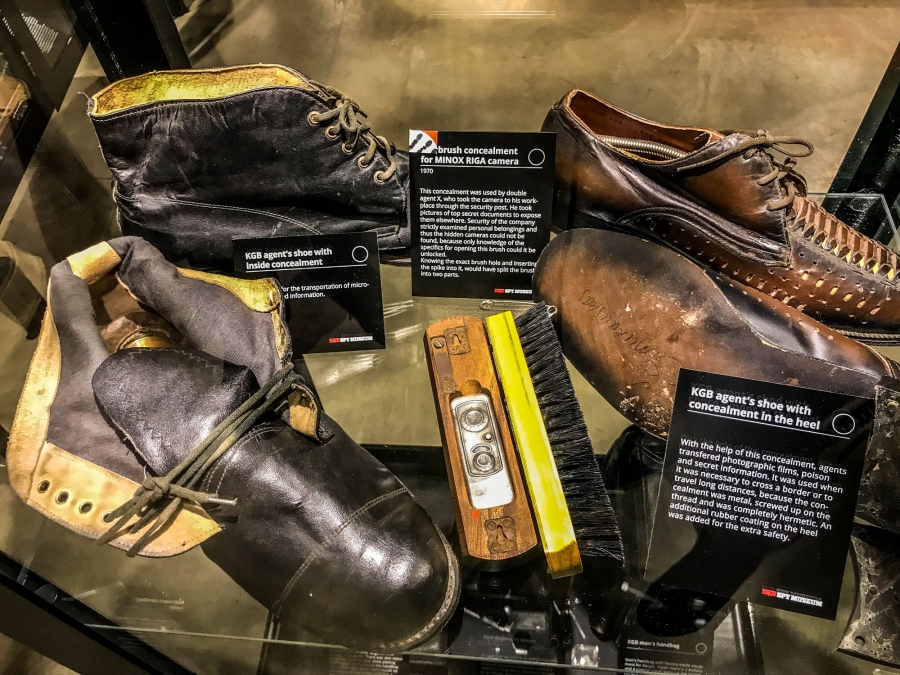 KGB prop masters raised camouflage to an art form. Here a concealment device — used to transport anything from film negatives to vials of poison — is tucked into an ordinary shoe polishing brush. 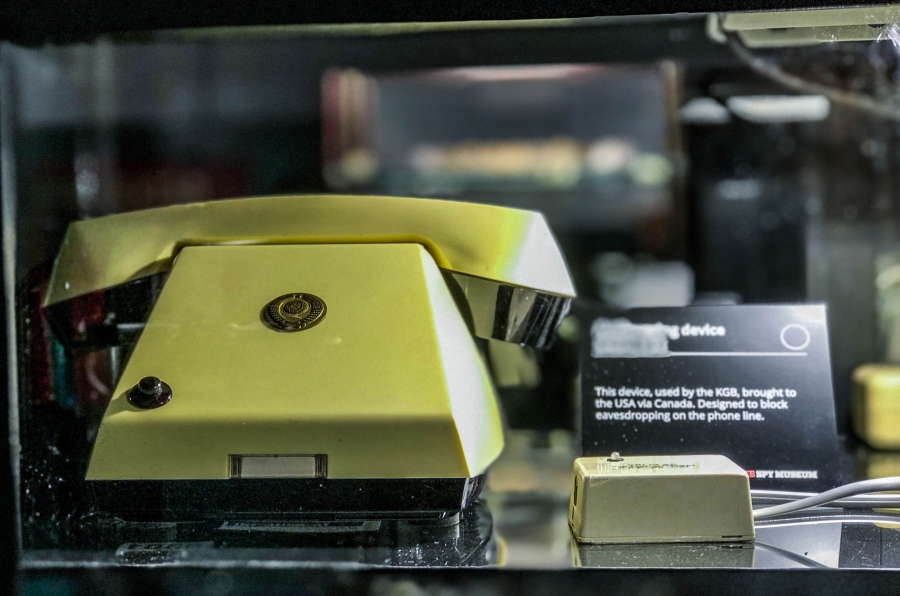 This ominous, dial-free phone was actually an anti-listening device — designed to prevent Soviet agents' phones from being bugged while on assignment.

At the same time, espionage was moving online and the digital revolution quickly rendering engineering marvels like cufflink cameras obsolete. Urbaitis spent years hunting defunct Communist spy technology and ephemera; knocking on doors, following leads and building a rolodex of trusted contacts. And, just like a true KGB officer, he had to become adept at recognizing a true artifact from an imposter; of the more than 3,500 artifacts on display at the museum, only two are reproductions.

The museum pays homage to this bygone analog era, revealing the Wozniak-level of wizardry that enabled the KGB’s work. These impossibly intricate Cold War listening devices and hidden cameras — ingeniously disguised and impeccably crafted — also function as works of art, even when the mission was murder. 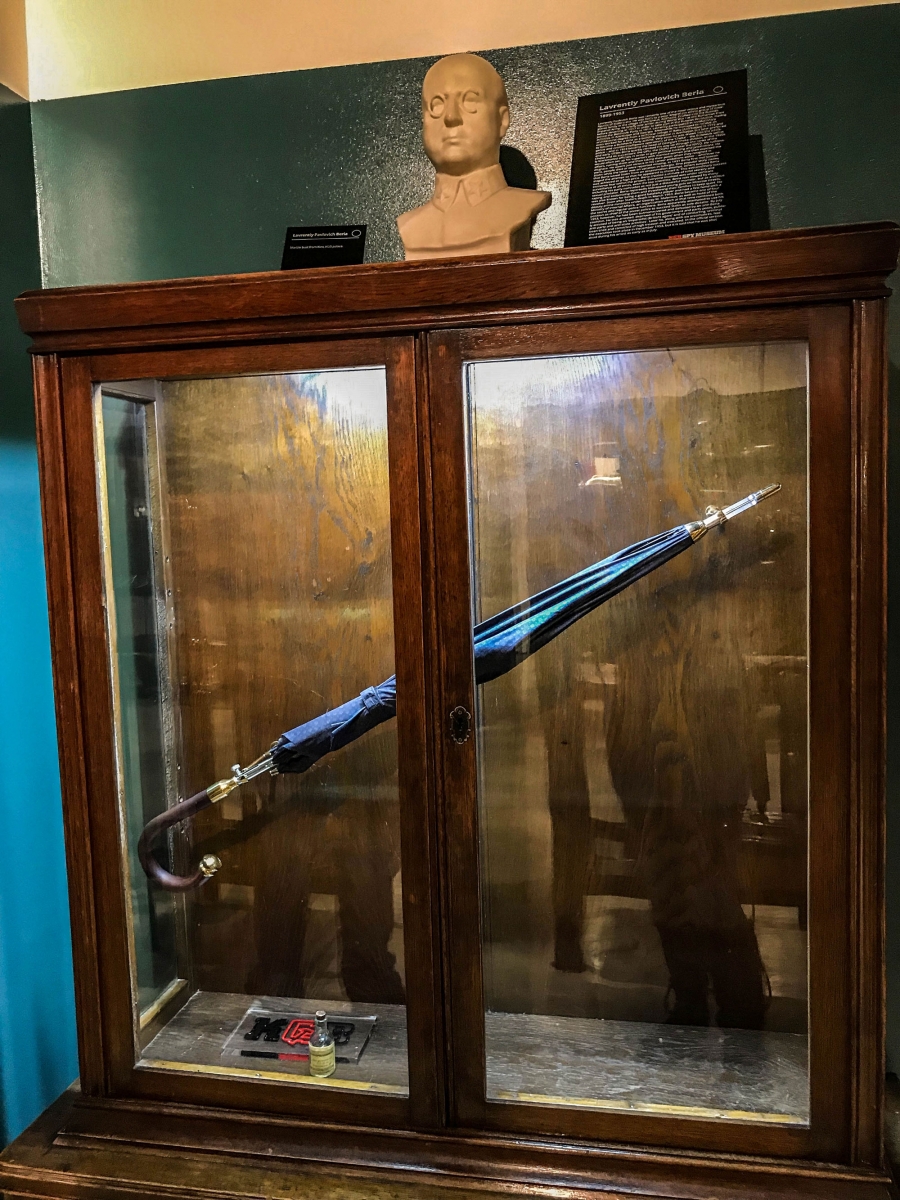 The famous killer umbrella, used to murder Bulgarian dissident writer Georgi Markov in broad daylight on a London bridge. A KGB operative fired a pellet filled with Ricin, a lethal toxin, into his leg. 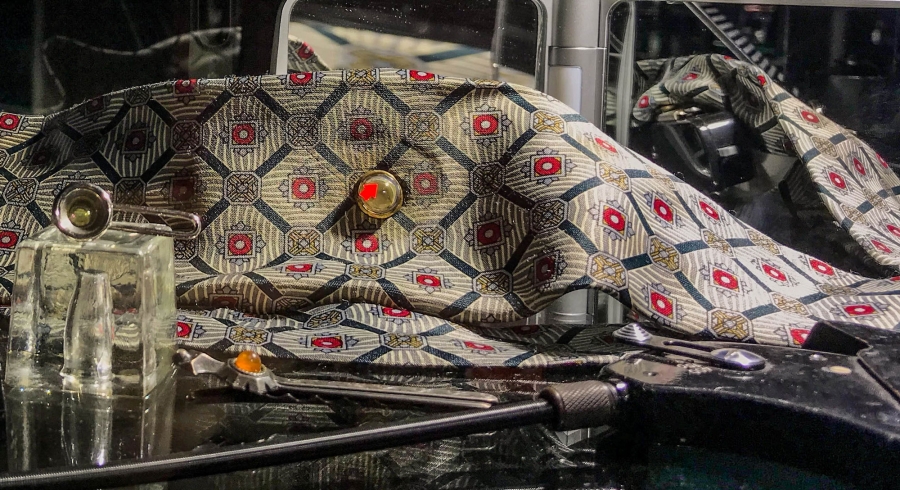 The Tochka (Russian for “dot”) camera was a masterpiece of miniaturism: a camera that could be disguised in objects as tiny as a tie-pin. But operating a Tochka, which an agent controlled via a remote control in their pocket, was still not without risk; the shutter made a tell-tale click, Agne Urbaityte explains. Agents would have to clear their throat, or make some other sound, to mask the fact they were taking the pictures.

Admiring these tiny, sometimes macabre, creations, it’s easy to forget what’s not on display here — the KGB’s real cudgel, after all, was psychological. The Soviet regime managed to weaponize an entire population by wreathing them in paranoia. Soviet citizens always had to ask themselves: Who’s listening when I speak? Who’s watching?