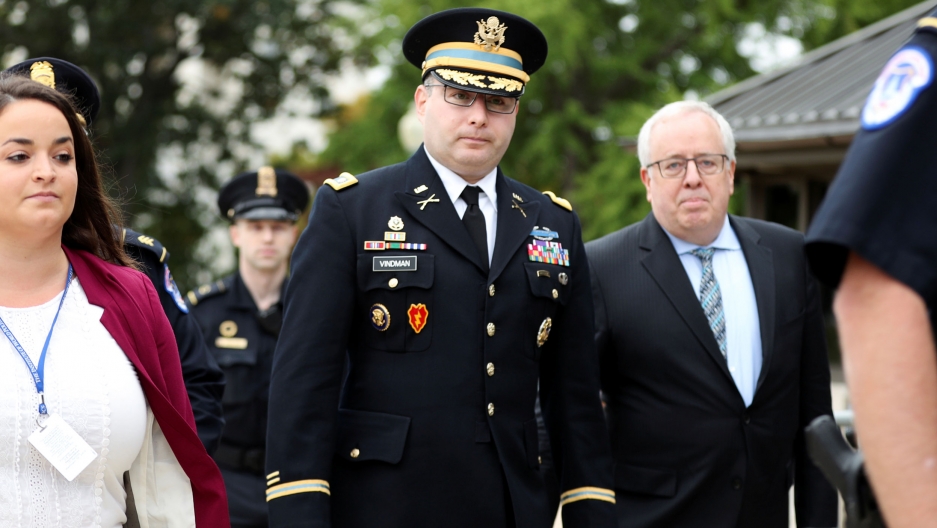 Lt. Col. Alexander Vindman, director for European Affairs at the National Security Council, arrives to testify as part of the US House of Representatives impeachment inquiry into US President Trump on Capitol Hill in Washington, DC, on Oct. 29, 2019.

A top adviser to President Donald Trump on Ukraine testified on Tuesday that he was so alarmed after hearing Trump ask Ukraine's president to investigate a political rival, Democrat Joe Biden, that he reported the matter to a White House lawyer out of concern for US national security.

Army Lt. Col. Alexander Vindman, director of European affairs on the National Security Council, arrived at the US Capitol clad in his military dress uniform as he became the first current White House official to testify in the House of Representatives impeachment inquiry against Trump.

Vindman, a Ukraine-born American citizen and decorated Iraq War combat veteran, also became the first person to testify who listened in on the July 25 call at the heart of the Ukraine scandal. Even before his arrival, some allies of the Republican president, including Fox News host Laura Ingraham, sought to attack Vindman's integrity and questioned his loyalty to the United States.

Biden defended Vindman as a hero, calling attacks on the Army officer's character and loyalty "despicable."

"He's a hell of a patriot," the former vice president told MSNBC.

"I trusted him with my life then, I would now, and I find preposterous the innuendo that he somehow is a double agent. That was just fear and hate-mongering and I found it reprehensible."

On Fox, they accused Vindman of espionage. Republican Congresswoman Liz Cheney wasn't having it.

House Republican conference chair Rep. Liz Cheney on questioning the patriotism of Lt. Col. Alexander Vindman and others: "We're talking about decorated veterans who have served this nation ... It is shameful to question their patriotism, their love of this nation." pic.twitter.com/vwbVqUG94w

When Vindman worked in Moscow for the US government, he served under Gen. Peter Zwack, who told The World's Carol Hills that he's deeply troubled by what he calls innuendo and slander directed at Lt. Col. Vindman.

"We worked together in an immensely sensitive time, where we all had to trust each other," Zwack said. "I trusted him with my life then, I would now, and I find preposterous the innuendo that he somehow is a double agent. That was just fear and hate-mongering and I found it reprehensible. And I think it offended me enormously, including, I think a lot of other what you would call fair-minded people, especially that have known Alex as long as we have and have seen him serve our country so well and dedicatedly."

Carol Hills: What is it about his personality or character that you observe that gives you such a great sense of him?

He is a straight shooter — and something I respected — and it didn't matter if he was a young major and I was a brigadier general. He had the courage, convictions to tell me when he thought I was wrong — and he was often right. But that's what you need when you're in a tight-working, small organization where you have to trust each other. And he has an enormous data bank, both of acquired knowledge, but also growing up speaking fluent Ukrainian and Russian. And he has that background, too. So, I learned to rely a lot on his judgment. Absolutely.

What do you say to those who have misgivings about Col. Vindman?

Sadly, I think it's moved from ... I think that the issues have moved from objectivity and have become politicized. And when you go that way, judgment is lost. And again, I'm doing this now and speaking because I feel that now people have viciously gone after his reputation, have impugned his character. And I've seen him — I've seen him almost for two years in difficult places and at difficult times, and I'm pushing back on his behalf. I'm doing it because I know him a bit, probably more than 999 out of 1,000 people that are talking about him. He's a great American, and I wanted to get on the record on it.

Supposedly, according to the Corrupt Media, the Ukraine call “concerned” today’s Never Trumper witness. Was he on the same call that I was? Can’t be possible! Please ask him to read the Transcript of the call. Witch Hunt!

How many more Never Trumpers will be allowed to testify about a perfectly appropriate phone call when all anyone has to do is READ THE TRANSCRIPT! I knew people were listening in on the call (why would I say something inappropriate?), which was fine with me, but why so many?

Now, this morning, President Trump tweeted that he was surprised that Col. Vindman was listening in on the call, that famous July 25 call to the president of Ukraine. Many people listen in when presidents are talking to foreign leaders. But in President Trump's tweet, he sort of was surprised that Col. Vindman was one of the ones listening in. Are you surprised by that?

No, if it is a fairly open administration, you would have some subject matter experts. Somebody had to say he could be on the phone, whether it was the NSC director. The bottom line is that he was on there. He is the NSC subject matter expert for Ukraine and as such, if there is a degree of trust in that environment, they should want him to hear that discussion firsthand so they can parse out what exactly happened after the fact. No, I'm not.

Has Col. Vindman ever said anything to you that suggested he was partisan in any way?

No. I don't know how he voted. It shouldn't matter. I'm a retired Army officer, 34 years ... Doesn't matter if you voted for somebody, and it wasn't the president. Doesn't matter because we work hard to make the president successful, whether we voted him or not. That's our mission. That is a specious argument. I heard that, and I pushed back.

Gen. Zwack, is there anything else you'd like to say about Col. Vindman?

I think that history will find a good place for him. I regret he is going through this in such a difficult period. I just want this thing to return to objectivity. I want to see him emerge with his hard-earned reputation as a great American intact.