Editor's note: This story originally aired on The World earlier this year as part of the series, "400 years: Slavery’s unresolved history." It was repackaged on the show again on Nov. 29 as part of a special feature over the holidays along with this story.

Over one doorway at Elmina Castle, a former hub of the slave trade in Ghana, a brass plaque reads, “door of no return.” It was the last door that captive Africans went through in Africa before they were boarded onto ships and sold as slaves.

The passage is intentionally narrow, so prisoners had to walk one by one through the near darkness and then into the sudden, blinding sunlight. From there, the captive Africans were chained for months in the packed bowels of ships until they arrived in the Americas, and were enslaved.

Related: 'Willful amnesia': How Africans forgot — and remembered — their role in the slave trade

Ampson Hagan, a postdoctoral student in anthropology at The University of North Carolina at Chapel Hill, was one of the few Americans on a recent tour at the castle.

“Think about all the work and mental labor that went into constructing this place so that it was efficient. That’s remarkably awful.”

“Think about all the work and mental labor that went into constructing this place so that it was efficient,” he said. “That’s remarkably awful.”

To hear more about the experience of touring the old slave castle, click the audio player below. 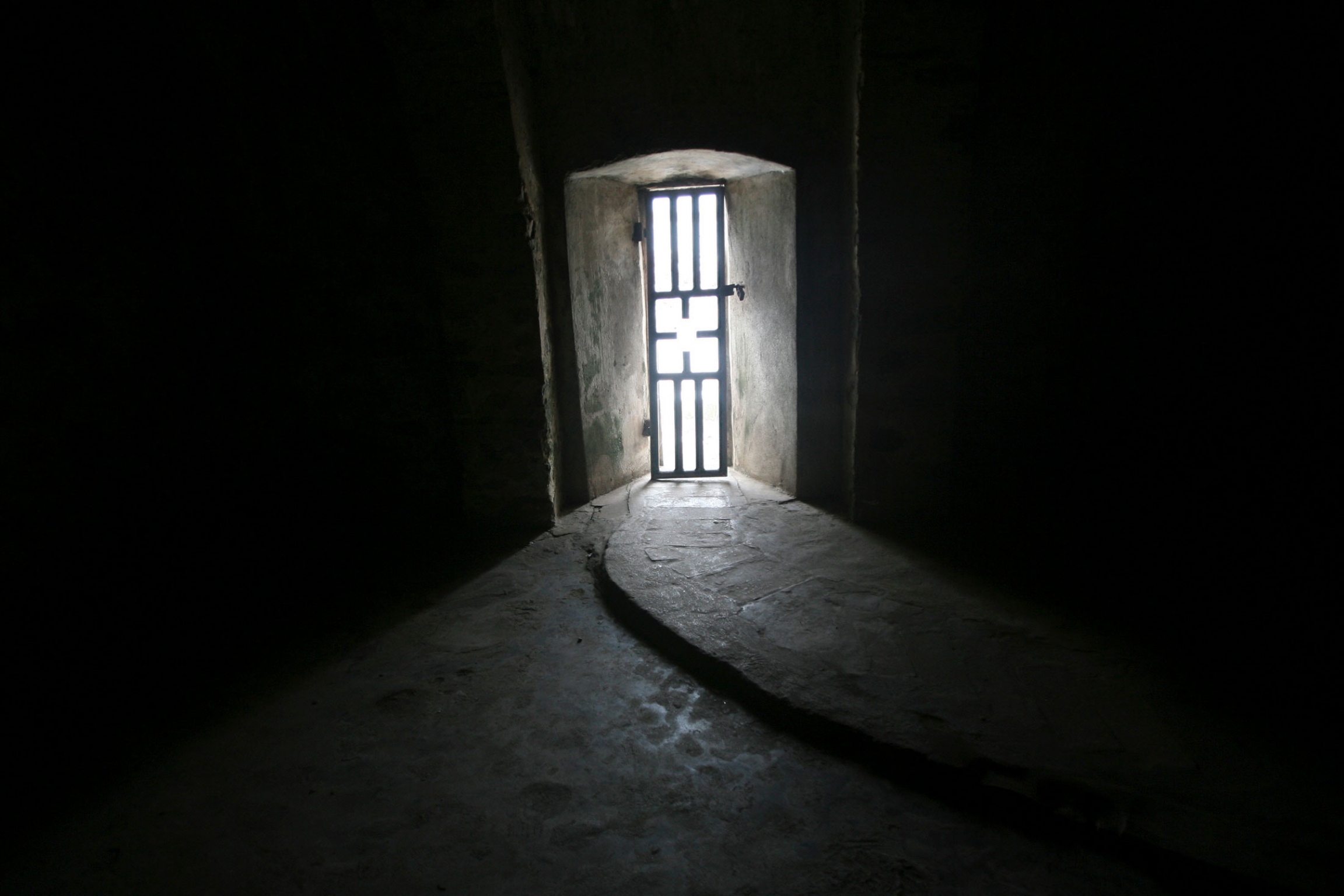 A general view shows "the door of no return" in Elmina Castle in Cape Coast, Ghana.

Today, some descendants of enslaved people are returning to Ghana, which has declared 2019 the “Year of Return.” It’s an emotional moment, with Africans and African Americans coming at it from different perspectives, and with different hopes.

Many African Americans visiting Ghana are trying to reconnect with their family history and culture from before the slave trade. At the same time, some Ghanaians are attempting to reconcile with people from the African diaspora. Representatives of ethnic groups that participated in the slave trade have recently apologized.

The leader of the Akwamu people, Kwafo Akoto, has even offered land to African Americans who move to Ghana.

“It is a checkered history that happened, and we cannot dwell on the past forever. We've said on different platforms — we've rendered our apology to our kinsmen who were taken from the coast of West Africa to the diaspora to serve as slaves. We jointly condemn that inhumane treatment that was meted out to them.”

“It is a checkered history that happened, and we cannot dwell on the past forever. We've said on different platforms — we've rendered our apology to our kinsmen who were taken from the coast of West Africa to the diaspora to serve as slaves. We jointly condemn that inhumane treatment that was meted out to them,” Akoto said. 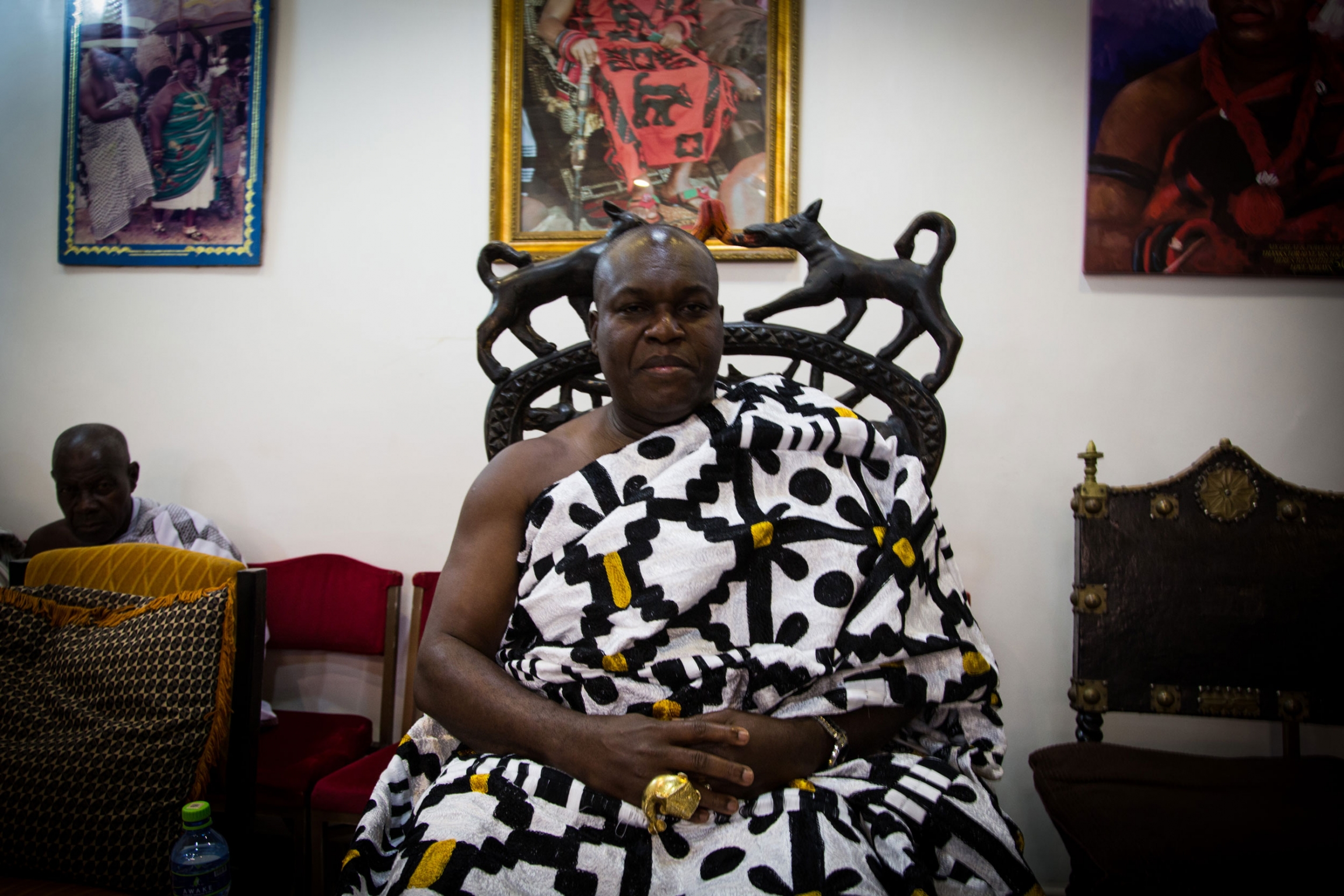 Chief Kwafo Akoto is the leader of the Akwamu people in Ghana.

The Akwamu were fighters and protectors, victims of the slave trade and participants in it, too.

“It did happen. We cannot explain too much why it happened, but with all due apology, they should come home and put a closure to it so that we can live as brothers and sisters again.”

Listen to the chief talking about trying to achieve closure, and inviting others to do so, in Ghana, by clicking the audio player below:

Akoto visited Christiansborg Castle on the coast of Accra, Ghana’s capital — which also held captive Africans who were later enslaved — for the first time five months ago.

“It was very difficult for me to go through it. I always didn’t want to do it because I was hearing the stories of how emotional it was,” he said. “But I decided to do it myself and feel it.”

Others, though, don’t see why Ghanaians should accept responsibility and guilt when the country also suffered at the hands of Europeans. 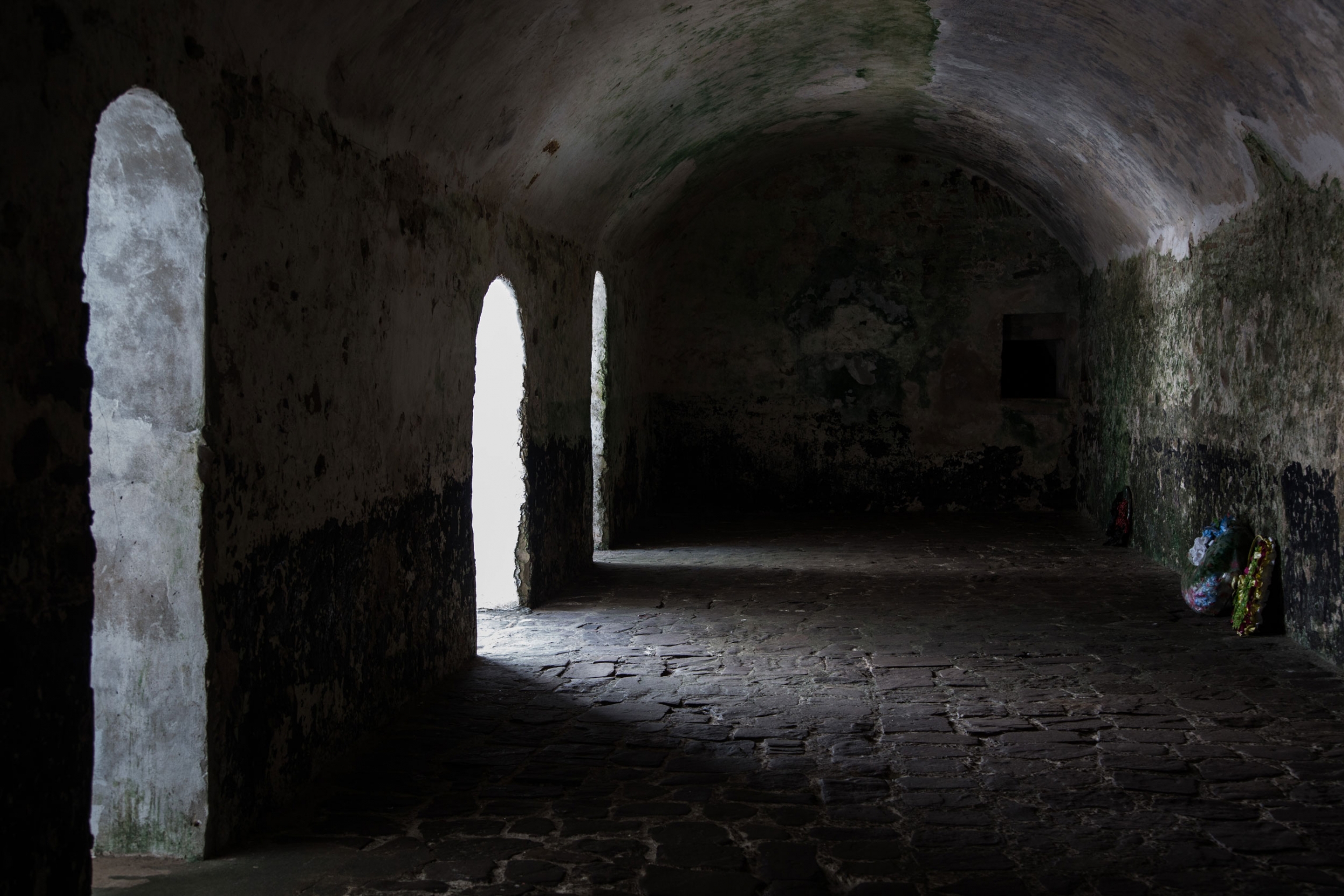 A view inside of Christiansborg Castle, Ghana.

“It's not that because we remain that we have got to be guilty,” said Fritz Baffour, a chief in an ethnic group and a member of Parliament who escorted the Obama family through Elmina Castle in 2015. “It's not about the blame game. It's about a conversation. But the thing is, when it comes down to the nitty-gritty, it was Europeans who initiated the slave trade.”

And it was Europeans who colonized Ghana. The country is still recovering today. Unemployment is high. Some children work instead of going to school. In some places, women can’t own land. If you need to go to a public hospital, you have to bring your own bedsheets, drinking water and hot water flask.

“I've had conversations over a number of years, and more especially last year, with people who I really considered to be part of those who would help rebuild Ghana — like, honestly, some of our brightest, most well-equipped people, and they're leaving.”

“I've had conversations over a number of years, and more especially last year, with people who I really considered to be part of those who would help rebuild Ghana — like, honestly, some of our brightest, most well-equipped people, and they're leaving,” she said.

Abdulai says Ghanaians should focus on what they can do to improve the situation here so educated Ghanaians stay in the country. She’s one of the few people openly questioning Ghana’s call for the African diaspora to return.

“What are they moving back home to? That's the question,” she said. “I know the struggle of living abroad, studying abroad. I have done that multiple times. But it is not the same as trying to figure things out in an environment where the system does not work.”

Many Ghanaians are desperate to go to the US. Abdul Majeed was deported from the US two years ago after getting a visa to Brazil, making his way north, asking US authorities for asylum, and spending a couple of years in American detention centers. 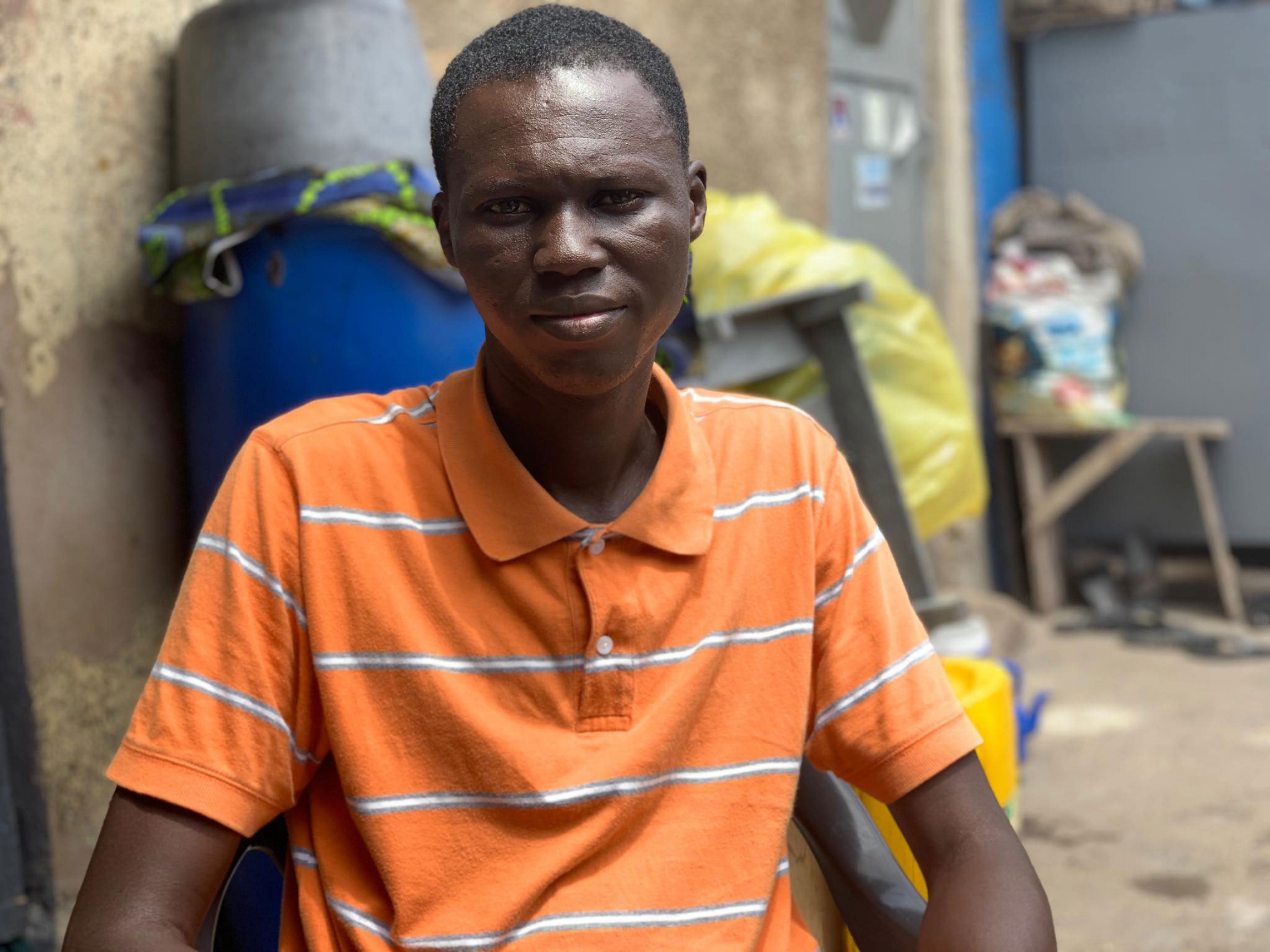 Abdul Majeed was deported back to Ghana in 2017.

The Ghanaian government has repeatedly, formally objected to the American use of chains on deportees during the flight home. The US says Ghana is no longer accepting Ghanian deportees, and in response, the US has cut back on the number of visas it offers to Ghana’s citizens.

Government of Ghana responds to the US Government's Visa Restrictions@USEmbassyGhana pic.twitter.com/sSBIjJyh0J

“The African Americans who were born over there [the US], they had opportunities, and they probably have a good life over there,” Majeed said. “They call themselves oh, ‘African, African.’ Even, in fact, they don’t do much. They only just come here to talk and then go.”

Many people repeat that refrain — that African Americans could help revive Ghana.

To many Ghanaians, the American descendants of enslaved Africans are privileged. But for people like Cynthia McCroy, an African American from Omaha, Nebraska, Ghanaians have something that American slave owners deliberately tried to strip away from enslaved Africans: their culture.

“We saw yesterday [there] were some gentlemen who were arguing, and other people came and you know, they pulled them apart. They talked to them. It wasn't a negative thing. They just were there to help,” said McCroy, who was on the tour of Elmina Castle with Hagan. “And back in our country, people just stand aside and watch or videotape it.”

But McCroy isn't kidding herself. She knows she lives in a much more prosperous and stable country — and she's grateful to be American.

Ghana lost many of its resources during colonialism and millions of its people during slavery. Africans who survived during slavery, in a way, fought for the life McCroy has today in the US as an American, she said.

“We, as Americans, are so blessed; we have so much. And us visiting the villages and the towns, we see the conditions that are so different for the people that are here,” she said. “And it's a lot of [what] it is because of what happened in the past — what was taken from them.”

“We, as Americans, are so blessed; we have so much. And us visiting the villages and the towns, we see the conditions that are so different for the people that are here,” she said. “And it's a lot of [what] it is because of what happened in the past — what was taken from them.”

“They would die for Israel,” said Danna Apraku, a retired nurse who returned to her native Ghana after living in the US for years. “So, why isn't it like that for Africa? Yes, [there was] slavery, but still, Africa wants them. So, they should come home.”

Her daughter, Akua Apraku, owns a tourism business in San Francisco and is thinking about moving to Ghana herself. She and her husband have four young boys.

“The incidents with Trayvon Martin and Tamir Rice give me pause in raising a young black man in America,” Akua Apraku said. “We want our children to experience being a place where they are free and can be molded and have confidence.”

They haven’t made a final decision yet, but they’re seriously considering the move. Although Akua Apraku can attest that there’s a lot of culture to get the hang of here.

“If you get scolded for not doing the 'right thing, traditionally,' I implore all my brothers and sisters in the diaspora — don't take it personally, because we're all getting it,” she said.

Akua Apraku said African Americans who come to Ghana should stand their ground because Africa belongs to them, too.