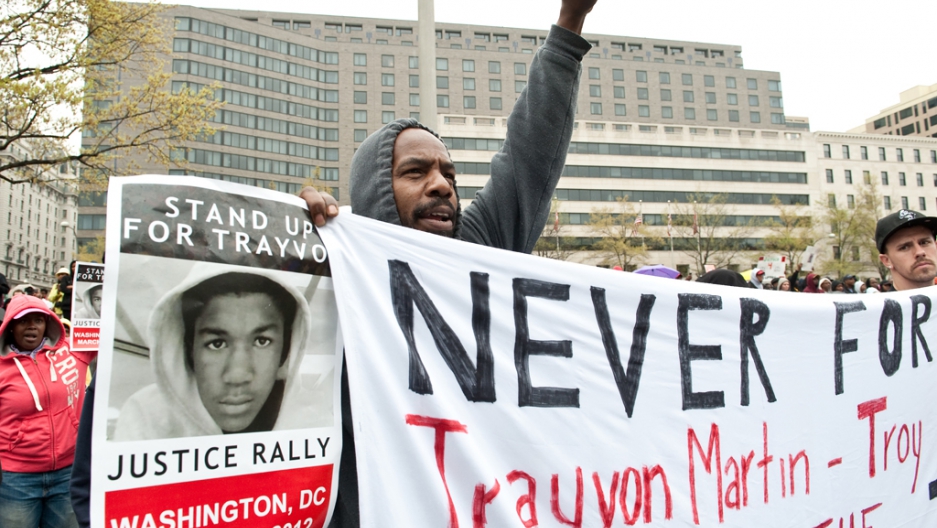 People attend a demonstration in Washington on March 24, 2012 to demand justice for Trayvon Martin, an unarmed black Florida teenager shot to death by a white volunteer guard on February 26. The suspect in the shooting, George Zimmerman, told police he shot Martin in self-defense while working as a neighborhood watch captain. Zimmerman's friend and lawyer now say he is scared for his life.
Credit: NICHOLAS KAMM
Share

On March 26, it was exactly a month since Trayvon Martin was killed in a gated community in Florida. The unarmed, black teenager was shot by a neighborhood watch volunteer, George Zimmerman, who was not arrested by the Sanford police because he claimed self-defense.

Since then, the case has caught fire on a national level and has become a lightning rod for social justice, prompting protests and rallies across the country calling for Zimmerman's arrest. Here is a timeline of how the events unfolded:

February 26, 2012: Trayvon was shot while walking home from a trip to the convenience story. The case did not get coverage at the national level and details at this point where sketchy, however TIME credited social media and activism sites with boosting the signal about the case.

March 8, 2012: TIME noted that this was the day Trayvon’s parents Tracy Martin and Sybrina Fulton created a petition on Change.org calling for the prosecution of Zimmerman. To date, the petition has garnered 1.5 million signatures.

March 17, 2012: The 911 tapes from Zimmerman's calls to the police were released on this date, raising questions about Zimmerman's claim of self-defense. They showed that the police dispatcher told Zimmerman not to follow Trayvon, but Zimmerman disregarded the advice.

March 19, 2012: Trayvon's parents renewed calls for Zimmerman to be arrested after the release of the 911 tapes, and college students gathered outside the Seminole County criminal courts to protest the incident which they felt was a case of racial profiling. The FBI and Justice Department also opened investigations into the handling of the case.

March 20, 2012: A state attorney announced that a Seminole County grand jury would investigate the Trayvon Martin case, handing down a decision on April 10.

March 22, 2012: A "million hoodie march" in New York City drew at least a thousand people in a rally in support of Trayvon. Florida congresswoman Frederica Wilson, a member of the Congressional Black Caucus, called on the Sanford police chief to step down over the handling of the case. "No drug tests. No alcohol tests. No lie detector tests. It's just his word that he felt threatened, so therefore he shot to kill. That is unacceptable," she said.

Sanford Police Chief Bill Lee did step down "temporarily" on the same day, saying, "My role as the leader of this agency has become a distraction from the investigation." The case also ignited debate over Florida's controversial Stand Your Ground law, which some said made prosecuting Zimmerman harder.

Rallies and marches were held in Los Angeles and Sanford, Fl., with Rev. Al Sharpton making an impassioned plea for justice at the Sanford rally. People traveled from afar to attend the rallies, by the carload and busload.

March 23, 2012: President Barack Obama addressed the incident in very personal terms at a press conference, saying, "If I had a son, he'd look like Trayvon." While not commenting on the legal matters of the case, Obama called on the nation to do some soul-searching and commended the authorities for looking further into the case.

Meanwhile, Fox News host Geraldo Rivera landed himself in controversy for this statement: "I am urging the parents of black and Latino youngsters particularly to not let their children go out wearing hoodies."

March 24, 2012: John Carnduff Stewart of Melbourne Beach was arrested for sending threatening emails to Sanford Police Chief Lee. An excerpt read, "You [expletive] son of a bitch. You and your family deserve to be hunted down and shot like a dog, just like Trayvon Martin."

The threat of violence continued in connection to the case, as the New Black Panther party (with no affiliation to the Black Panthers of the '60s and '70s) offered a reward of $10,000 for Zimmerman "alive, not dead or harmed." Their leader Mikhail Muhammad said, "An eye for an eye, a tooth for a tooth. … If the government won’t do the job, we’ll do it."

March 26, 2012: Joe Oliver came out in defense of his friend, Zimmerman, saying, "He's a caring human being. I mean, he took a man's life and he has no idea what to do about it. He's extremely remorseful about it." Craig Sonner, Zimmerman's legal adviser, said that Zimmerman feared for his life.

A CNN/ORC International poll released on this day showed that nearly three quarters of Americans believed that Zimmerman should be arrested (67 percent of whites and 86 percent of non-whites).

March 27, 2012: Sanford police revealed Zimmerman's account of the events, saying he lost track of Trayvon as he walked back to his car and was approached from behind and struck by the teenager.

A request for Trayvon Martin's record at the Department of Juvenile Justice revealed that he had no record, but reports emerged of two suspensions from school, one for possessing small amounts of marijuana. The Martin family's lawyer said it was irrelevant to the case.

Geraldo Rivera issued a written apology for his controversial "hoodie" remark, saying that "by putting responsibility on what kids wear instead of how people react to them I have obscured the main point that someone shot and killed an unarmed teenager."

Trayvon's parents, Tracy Martin and Sybrina Fulton, spoke at a briefing on Capital Hill which was organized by House Democrats to address hate crimes and racial profiling.

House Democrats blasted the Sanford police for mishandling the case, with Congresswoman Frederica Wilson saying Martin was the victim of a "botched police investigation."

March 28, 2012: Rep. Bobby Rush (D-Ill.) made a statement by wearing a hoodie onto the House floor and saying, "Just because someone wears a hoodie does not make them a hoodlum." Rep. Gregg Harper tried to interrupt his statement on the technicality that lawmakers aren't allowed to wear hats on the floor, and Rush was eventually escorted off the floor.

Filmmaker Spike Lee retweeted an address that was purportedly of George Zimmerman's house, but turned out to be a George Zimmerman unconnected to the Florida shooter. The incident led to the elderly couple who owned the house spending the night at a hotel.

Lee later "deeply" apologized for retweeting the wrong address, calling for people to leave the McClain family alone. David and Elaine McClain were compensated by Lee and their lawyer said, "The McClains were very moved by Mr. Lee's apology. They would like the Lee family to be left in peace."

March 29, 2012: A video released by the police of Zimmerman showed that he did not sport any of the injuries he claimed to sustain at the hands of Trayvon Martin. Zimmerman's lawyer, Craig Sonner, had claimed Zimmerman had a broken nose after the altercation.

March 30, 2012: Gawker reported that e-mail and social media accounts belonging to Martin were reportedly hacked by a white supremacist in an attempt to smear his name. Gawker noted that the genuine contents of his e-mails revealed that "Martin apparently used his Gmail account for his college search, and it's filled with emails about upcoming SAT tests and scholarship applications."

A case in Pasadena, California attracted some attention because like Martin's case, it involved the mistaken shooting of an unarmed black teenager. The police, who shot Kendrec McDade, were misinformed by a 911 caller that McDade had a gun.

View all of our Trayvon Martin coverage.