Editor's note: This story originally aired on The World earlier this year as part of the series, "400 years: Slavery’s unresolved history." It was repackaged on the show again on Nov. 29 as part of a special feature over the holidays along with this story.

Rachel Engmann’s aunt told her there was something at Christiansborg Castle she should go check out for herself.

“She said to me, ‘Oh, you know, you're interested in culture. You should go to the castle and see.’ She said, “See your name on the wall.” So, of course, my surname is her surname, but when she relayed it to me, she didn’t say our surname; she said my surname.”

Christiansborg Castle is a walled, stone building that stands 3 stories tall on the coast of Accra, Ghana's capital. The facade is painted so white, it almost seems to glow in the sun.

In the 1600s and 1700s, they used it to transport and sell about 125,000 Africans into slavery — most to what today is the US Virgin Islands. The lower levels were the dungeons where many captive Africans died in cavelike cells with low ceilings.

Rachel Engmann, who is English and Ghanaian, was raised in Singapore and began visiting here in 2005. She found the family name in the castle courtyard, inscribed on the side of a water cistern. It read: “Carl Gustav Engmann, 1757.”

Rachel Engmann, then in her 20s, didn't know then that the find would become integral to her archaeology work, and to understanding her own family history. 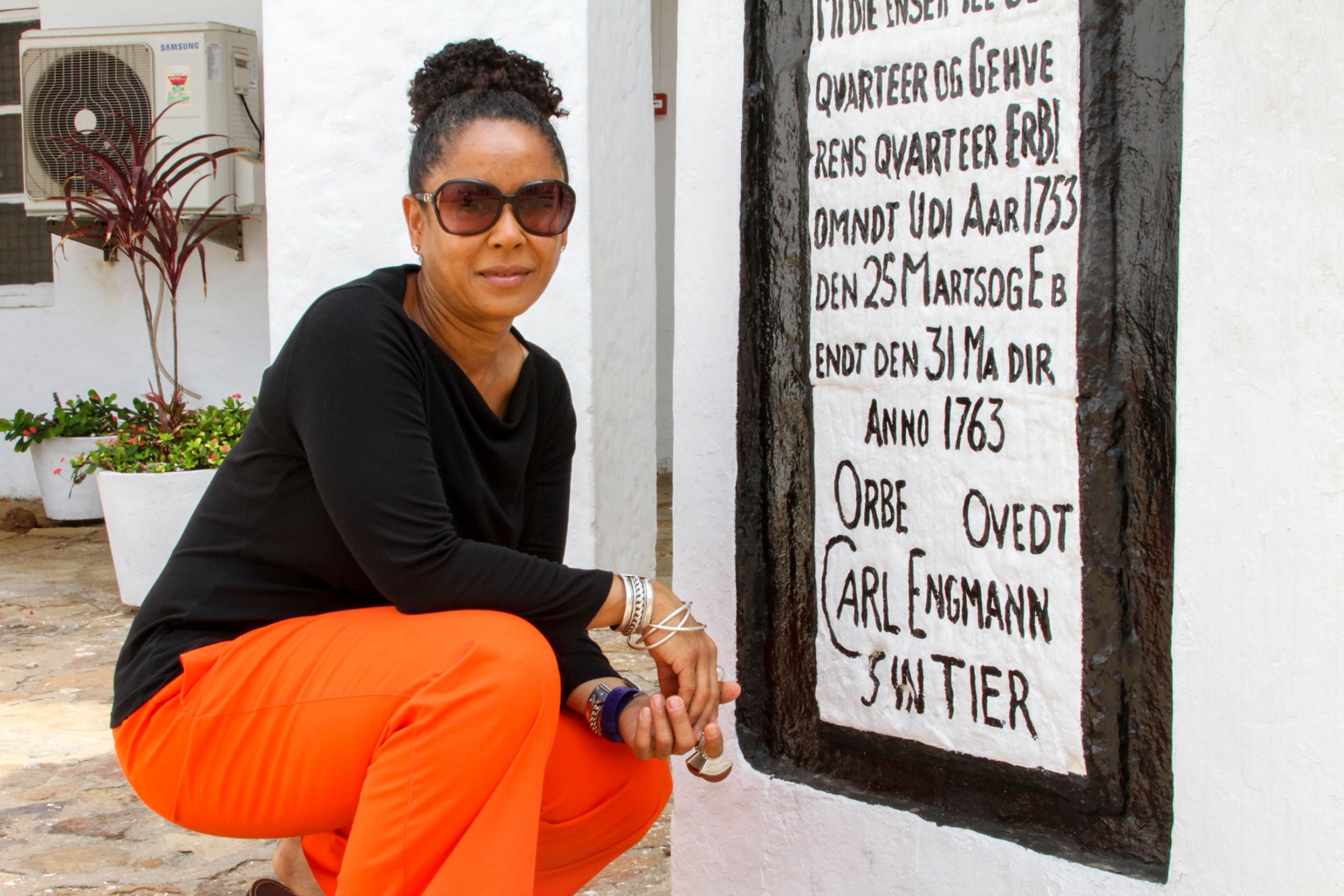 Rachel Engmann kneels by the plaque on the wall of Christiansborg Castle where her family’s surname is written.

Rachel Engmann had heard of a Carl Gustav Engmann in her family history — a Danish man who came here when the Danes occupied the area.

“I’d grown up with the understanding that [Carl Gustav Engmann] was a missionary,” she said.

That was family lore. But in Carl Gustav Engmann’s papers in the National Archives in Denmark, Rachel Engmann learned he was a governor of the castle for five years and oversaw the sale of captive Africans. He was on the board of the Danish slave trading company and had his own enslaved people.

That didn’t keep Carl Gustav Engmann from also marrying an African — Ashiokai Ahinaekwa, the daughter of a chief from the local Ga ethnic group. Carl Gustav Engmann later returned to Denmark, but not before he and his wife started the Engmann line in Ghana — which, generations later produced Rachel Engmann’s father, and herself.

She’s still trying to understand how she feels about being the direct descendent of slavers.

“This will sound like I'm avoiding it, which I'm not really, but I think I need time to process this.”

“This will sound like I'm avoiding it, which I'm not really, but I think I need time to process this,” she said.

But finding the family name in a way tied her to this castle. Rachel Engmann wanted to know more about it, and she was looking for a project to complete her graduate degree. She went to the Ghanaian president to ask for permission to do an archaeological dig at the castle.

Rachel Engmann also wrote about it here and here. 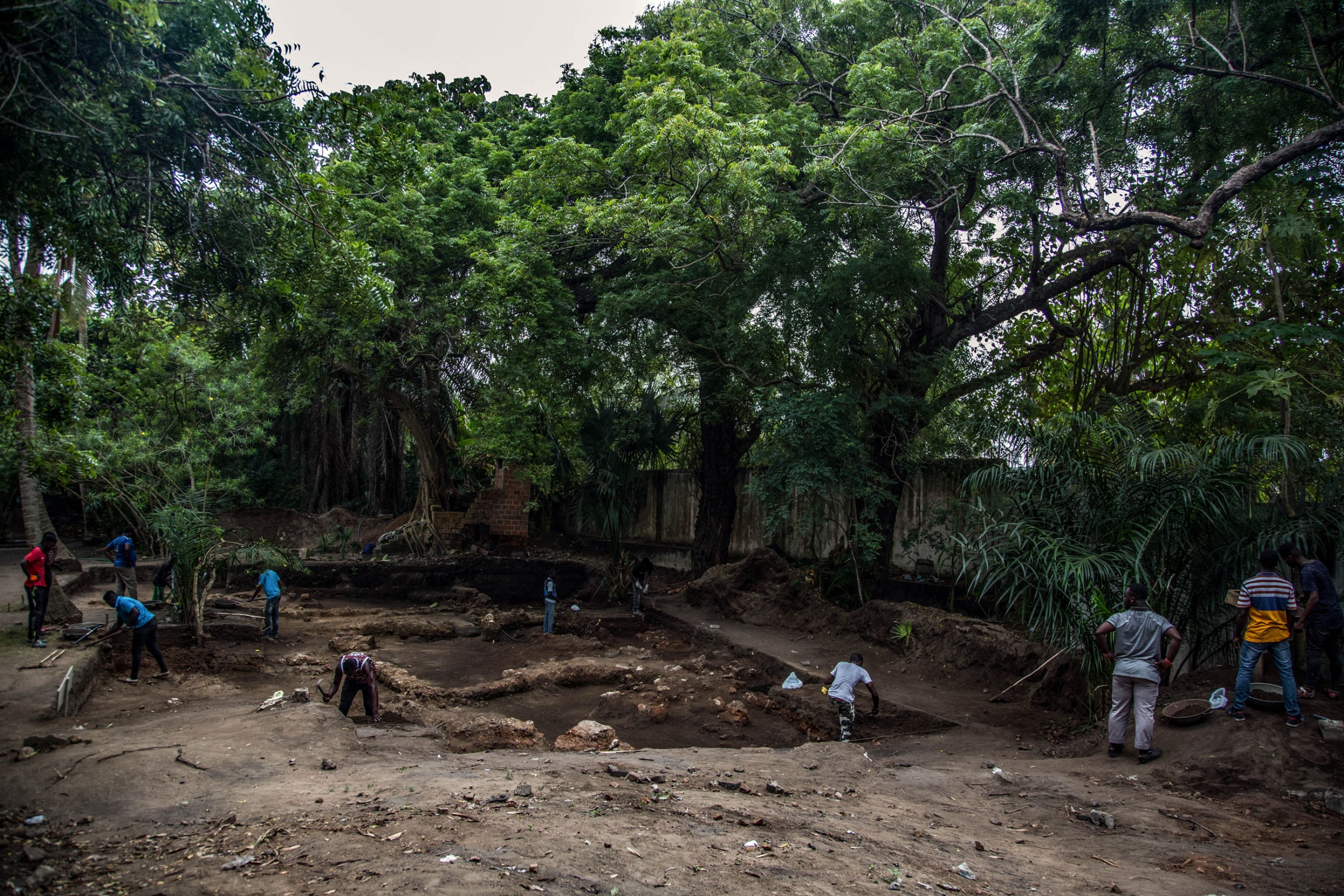 Several workers are shown at the archaeological dig next to Christiansborg Castle.

On this day, Rachel Engmann's team carefully scoops and sifts dirt. They’re local men, and one woman — she's trying to recruit more. Many are direct descendants of Danish men who married women in the Ga ethnic group. And they bring their own expertise: Their families have passed down oral narratives about what happened at the castle for generations.

Rachel Engmann hopes they can use the skills they’ve learned here to get other jobs.

“My hope would be that it can help create employment because many of them have not worked since last year when we were here. Not a single day's work. Because there are no jobs.”

“My hope would be that it can help create employment because many of them have not worked since last year when we were here. Not a single day's work. Because there are no jobs,” she said. 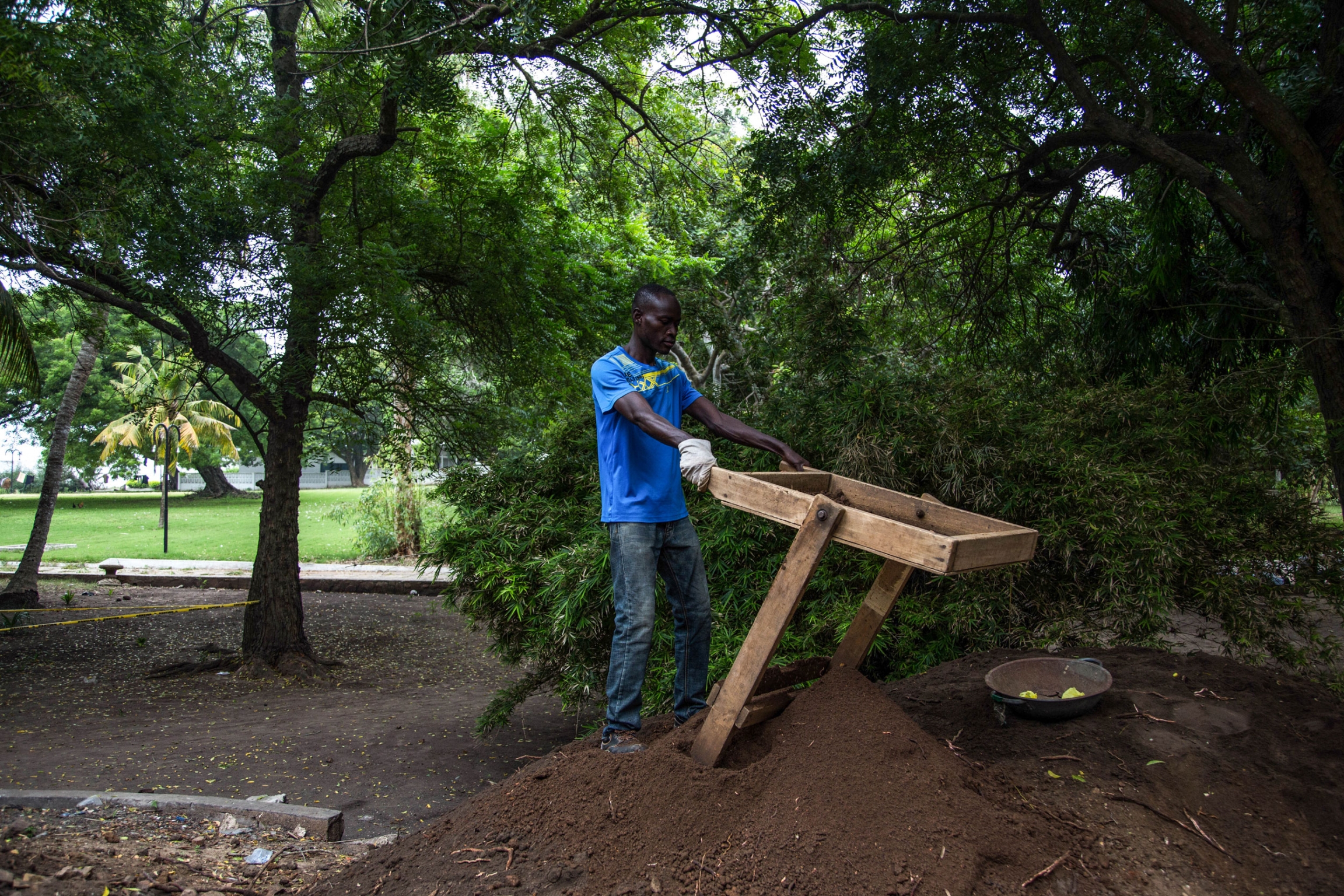 A worker sifts through soil at an archaeological dig next to Christiansborg Castle.

One of the team members — his name is Benjamin Odenke Annan — lives just on the other side of the wall.  It was originally a fishing village, but decades later it’s one of Accra’s most impoverished neighborhoods. People who live here often don’t get a formal education. Their homes don’t have toilets.

On the beach, there are dumpsters full of trash. The castle looms behind them. Annan says his grandmothers had told him what happened there, but he understood much more by working with Rachel Engmann.

“Because of archaeology, I have learned something.”

“Because of archaeology, I have learned something,” Annan said.

Also because of archaeology, he has more money. He’s sending his three boys — Richmond, Jonathon and Abe — to private school.

“This era, if you have something, you have to put your children to go to a better school,” Annan said. “I don’t want them to suffer.”

What does Annan think about money being spent to unearth the past on one side of the wall, while on the other side, he and his community could really use the cash? “If they make the museum, our community will get something,” he said.

The museum he’s talking about would center on the slave trade. It’s yet to come to fruition, but the government hopes it will feature items Rachel Engmann finds in her dig. Although Annan and the rest of the workers haven’t gotten any guarantees, he imagines his sons one day seeing his name in the museum.

“Someday, my boys will see my name there. They will write my name inside this thing, [this] museum. Then if my children, if they go, [they’ll say] ‘hey Dad, you’re mentioned over there.’”

“I can put this under the microscope and then I can track the trademark — so which country, which city, which town, which manufacturers.”

“I can put this under the microscope and then I can track the trademark — so which country, which city, which town, which manufacturers,” Rachel Engmann said as she rifled through some of the objects.

Some items need to go to a lab to be dated. Others are as recent as the time period after Ghana’s 1957 independence, when the castle became the government seat for the new republic. But most of the pieces come from the Danish slave period. Some were the goods that were traded — for people. One day, they might help historians understand what the value of a human life was during the trans-Atlantic slave trade. 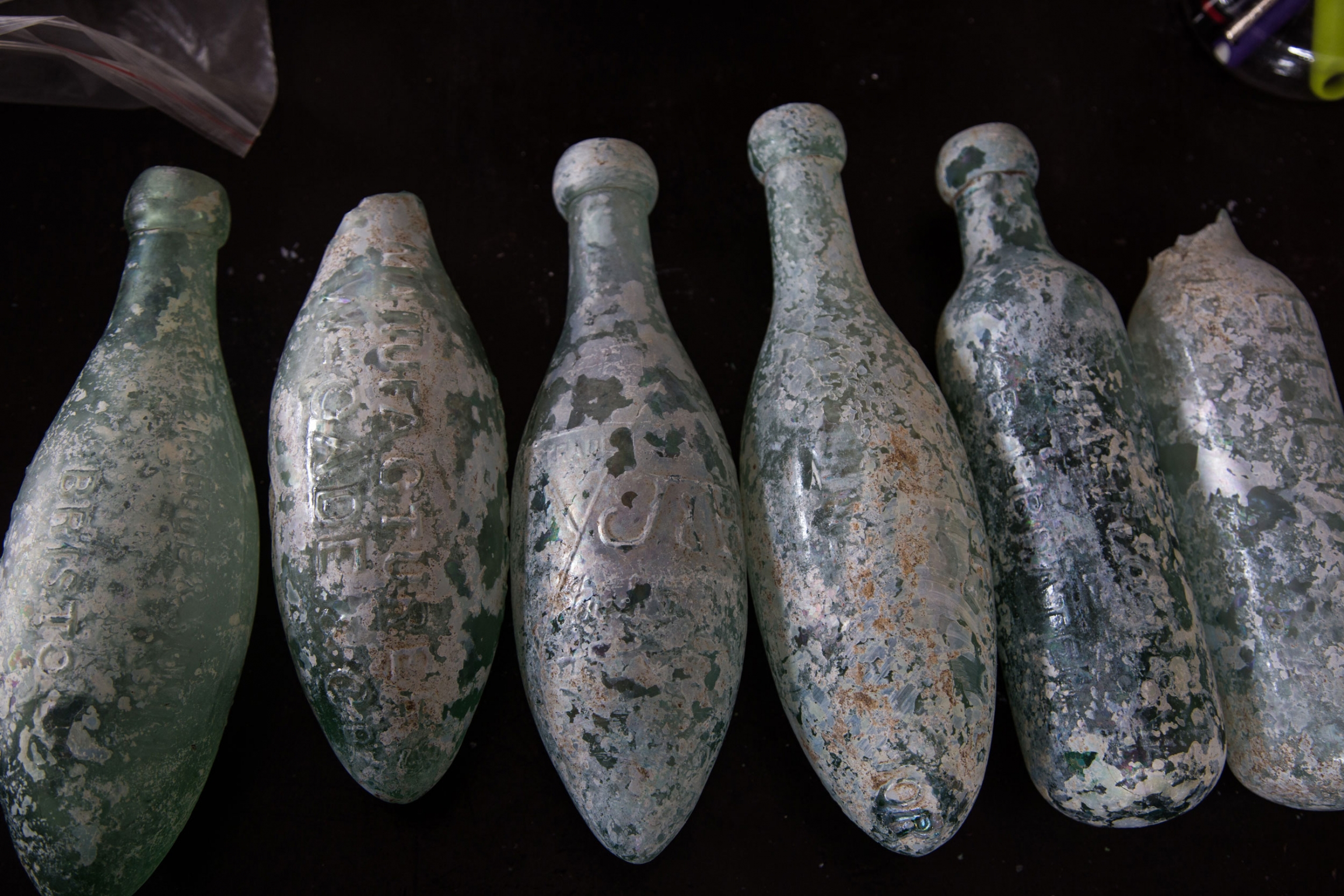 Artifacts recovered from the archaeological dig next to Christiansborg Castle.

The dig is funded by grants and awards from the US. Rachel Engmann has learned to do things carefully, in culturally appropriate ways, like regularly visiting and updating the local chiefs. Everything she does reflects on her Ghanaian family.

“But it’s nice in that, since I find all the funding, I can run the project the way I think it should be run,” she said.

Rachel Engmann explains that this project could help fill in the broad gaps in established history that’s largely based on European accounts of the slave trade.

“These are written from a European, white, male, colonial perspective, and they're also written for, you know, political reasons,” she said. “So, you know, they're not going to mention a lot of things.”

They usually don’t mention a thriving, local community surrounding the castle that did business with slavers. But the items Rachel Engmann has collected show there was one.

She wants people to understand that the history of the slave trade is complicated. Some Africans acted out of self-interest and took part in the slave trade. Some Europeans enslaved Africans and married them.