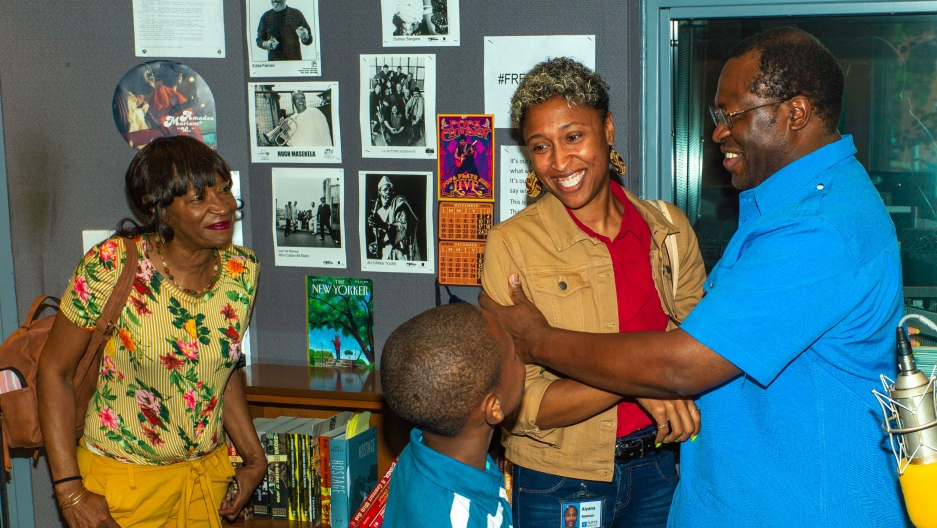 Jean Kapenda and Aiyana Lakes embrace while Lakes' son, Terrian, and her mother, Audray Spencer, look on. Lakes and Kapenda are cousins who share fourth great-grandparents and found each other through a genetic testing site. Kapenda has been able to tell Lakes about where her African ancestors are from.

Kapenda, a criminal justice professor at Weber State University in Ogden, Utah, has been interested in genealogy and ancestry for a long time. A few years ago, he did a swab and sent it to a genetic testing site.

After getting the results, Kapenda, who is originally from Democratic Republic of Congo, has been able to trace hundreds of relatives in the Americas, most of them the descendents of people enslaved and sent on ships across the ocean.

“It’s as if I was lost and somebody found me,” Kapenda said, describing what it feels like to find members of his family.

This year marks 400 years since the arrival of the first enslaved Africans in the English colonies in the Americas. Kapenda and his relatives share the painful history of slavery, and he says meeting an African ancestor is a remarkable life experience.

"It's been 400 years, so the most important thing is to find an African who shares DNA with you, somebody who was born in Africa, somebody who's got his roots in Africa and just being connected to that person means a lot, that you share a common ancestor who was taken to the Americas 400 years ago, 300 years ago, maybe 250 years ago," Kapenda said. 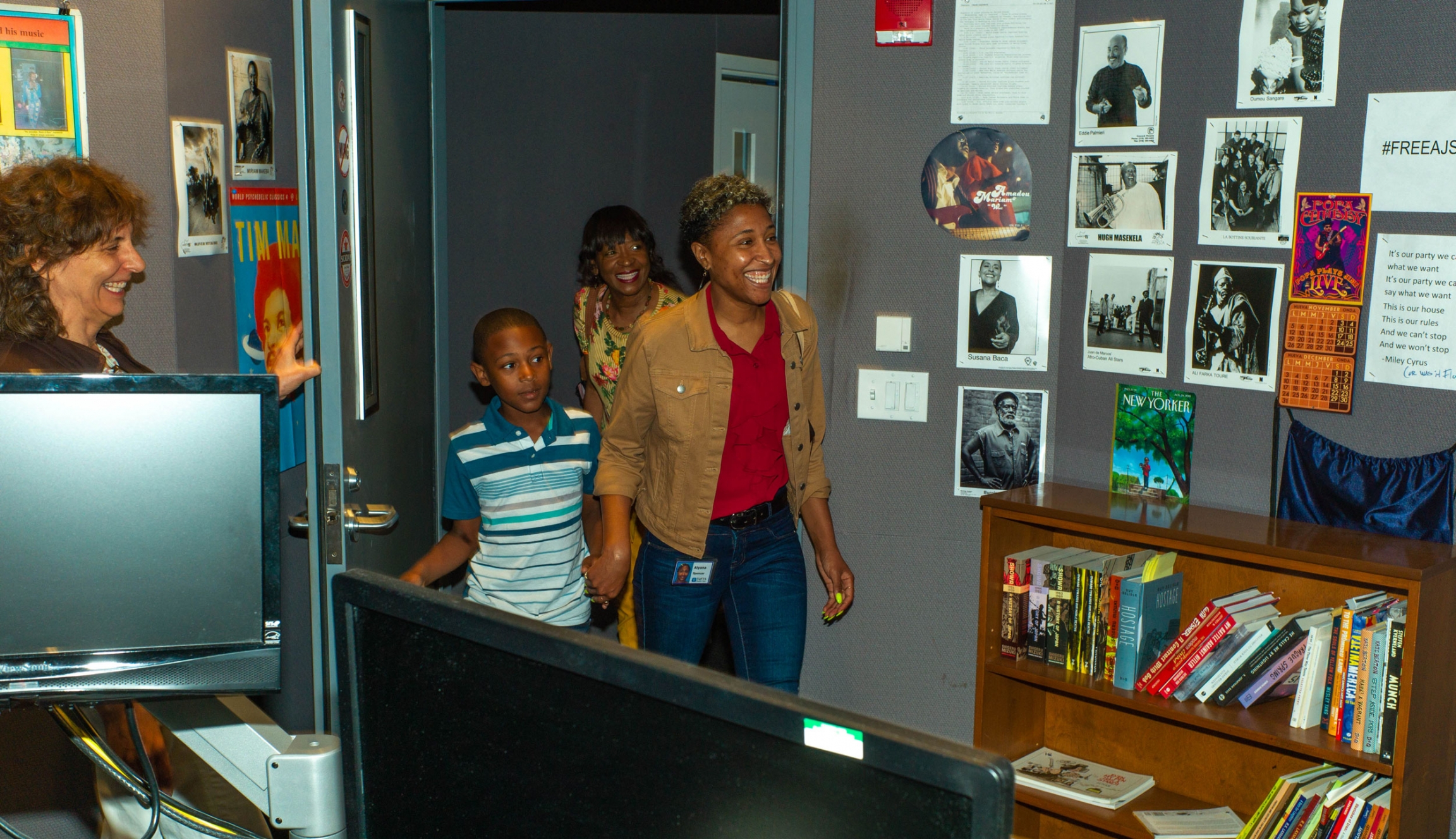 Aiyana Lakes walks through the door of The World's Boston studio to meet her cousin, Jean Kapenda, for the first time. She's followed by her son, Terrian Lakes, and her mother, Audray Spencer.

One of those remarkable moments happened at The World studio in Boston last Friday. Kapenda met his fourth cousin, Aiyana Lakes, in person for the first time. Kapenda and Lakes share a set of fourth great-grandparents.

Lakes, who is a graduate student at Fisher College in Boston, wanted to explore her ancestry and also did a DNA test to find out where she was from. She also chose to be notified whenever someone’s DNA matched hers. This is how Kapenda was able to reach Lakes and begin building a relationship.

“Our history doesn't begin and end with slavery,” Lakes said. “Our first conversations had nothing to do with slavery. It had everything to do with, ‘Your tribe is full of strength in riches, and slavery was just a blip in the radar.’ I wish that we as African Americans and scholars would teach you more of the power that comes out of Africa versus just the slave trade.”

We had some very special guests at The World studio last week. Jean Kapenda met his fourth cousin, Aiyana Lakes, in person for the first time. Kapenda and Lakes share a set of fourth great-grandparents. . Kapenda, a criminal justice professor at Weber State University in Ogden, Utah, has been interested in genealogy and ancestry for a long time. A few years ago, he did a swab and sent it to a genetic testing site. . After getting the results, Kapenda has been able to trace hundreds of relatives in the Americas, most of them the descendents of people enslaved and sent on ships across the ocean. Aiyana Lakes is one of them. . Through Kapenda, Lakes has been able to learn about her ancestry in a way she hadn’t been able to before. . Read how these cousins were able to connect through DNA testing on the link in our bio.

Lakes says she was looking for a way to connect with more African Americans when she took the DNA test.

“For me it was, well, what type of American am I and why do I have to identify as one type of American because I don't really know where I'm from?” she said. “If you ask me, I'm from Boston because I don't have another language. We have our own traditions that we've kind of made for ourselves, but I can't say my family's from Puerto Rico, my family's from Cuba. I can't say that. So, I took the DNA test to kind of see exactly where I was from to maybe do some research to find out what are some of my traditions, what are some of my dishes. And that's why it was so great when my cousin reached out.”

Jean Kapenda and Terrian Lakes pose for a photo.

Lakes brought her son, Terrian, and her mother, Audray Spencer, to The World studio to meet Kapenda, who was able to fill in some of the information Lakes was looking for.

“So, now my little cousin, my little nephew Terrian, has an uncle,” Kapenda said. “I am your uncle and I'm a Lunda, a Lunda from the Congo. So, whenever they ask you where you're from you would say, ‘I am from the Congo, I'm in Lunda and my uncle Jean Kapenda is a Lunda.’”

The Lunda tribe founded an empire in the 16th century and reached the height of its power in the 1850s. It stretched from what is now Democratic Republic of Congo, northeastern Angola and northwestern Zambia.

Spencer says she saw this as an important moment for her grandson.

“I feel good to know now that my grandson will be able to actually say a tribe that he — that means me, too — am connected to. And I can actually say, ‘I'm from Lunda tribe’ while I have been told so many times, “You have no country.””

Lakes says she hopes to one day visit Africa.

“That was my ultimate goal is to find a way to get back to Africa,” Lakes said. “But when I first started it I didn't know that I would have actual family there. So, now it's time to start saving up the pennies because I really want my son to know where he's from and not feel like he doesn't have a connection to his ancestors or to his roots or anything. When you grow up and people are continually asking you, ‘What are you?’ because you don't look like one particular race,  it kind of weighs on you.”