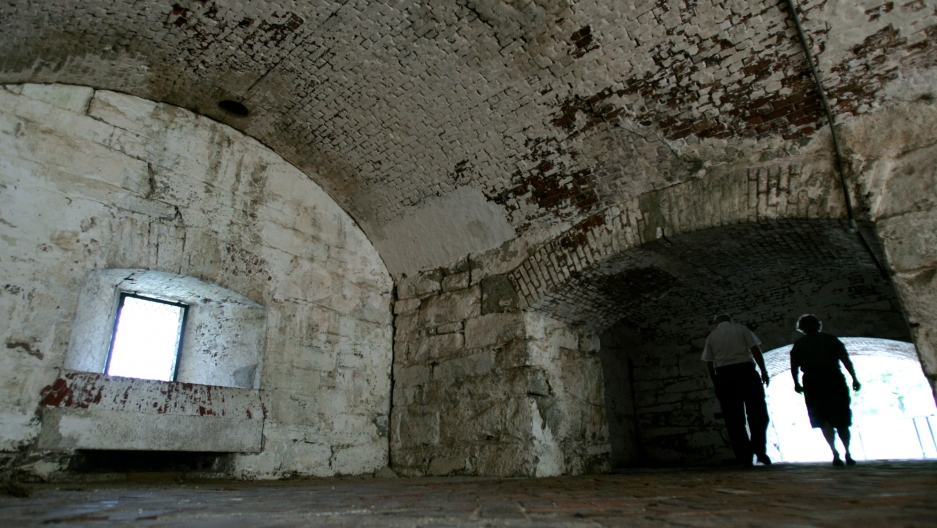 A couple walks through Fort Monroe in Hampton, Va. Fort Monroe was where fugitive enslaved Africans once flocked to find freedom during the Civil War.

The first enslaved Africans to arrive in the 13 American Colonies weren’t supposed to end up there.

Historians know they came from modern-day Angola, from the Kingdom of Ndongo. Portuguese missionaries gave them European names like Antony, Isabela and William. They were probably captured during war, sold to the Portuguese, forced to march a hundred miles or more to the port of Luanda, then loaded into a ship named the San Juan Bautista.

It was suffocating on the ship. The enslaved Africans were packed in. More than a third of them died. The San Juan Bautista was headed to Spanish colonies in Veracruz, modern-day Mexico, when it was attacked by two warships — pirates.

“Pirates are thieves that happen to live on sea,” says Boston University historian John Thornton. “But what we're actually talking about is what is politely called privateering.”

Privateering is when a government gives private vessels permission to steal from other countries’ ships. It was very common in the 17th century. In 2006, Thornton became the first to discover the identity of the privateers who attacked the San Juan Bautista. Many archives are newly digitized, making archived documents more accessible than ever. Thornton identified the two ships as the White Lion and the Treasurer. Their captains and much of the crews were English.

“One of them was sailing under a Dutch flag and the other under the flag of the Duke of Savoy,” Thornton says. “In those days people swapped flags out, and the crews were international as well.”

They took about 40 or more of the Africans off the San Juan Bautista, and headed to Point Comfort, Virginia. 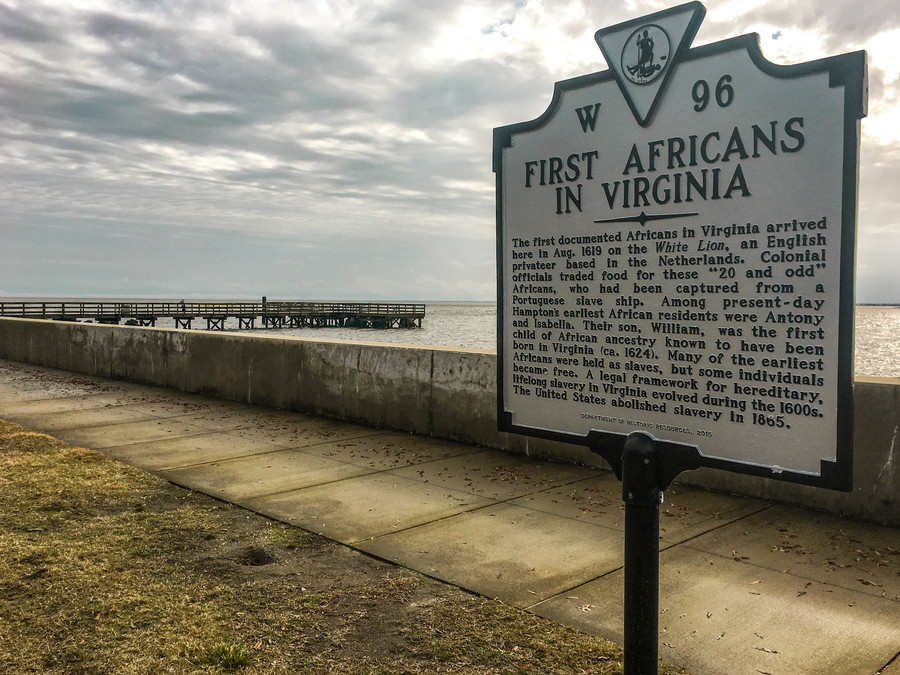 The sign at Fort Monroe marking the arrival site of the first enslaved Africans in the English colonies. It was first put up in 1994.

Point Comfort is as far east as you can get in Virginia — on a peninsula that extends out into the Chesapeake Bay. To get to it, you have to cross a bridge over a moat. On the other side is the largest stone fort in America — Fort Monroe — enclosing 565 acres.

The Jamestown settlers built the first fort here in 1609. It’s basically a cabin surrounded by cannons and a fence. There was constant risk of attack by sea, particularly from the Spanish, who had colonies to the south.

“This would serve as a lookout and allow the colonists up the river to know ‘Hey, a potential enemy’s coming in to the Chesapeake Bay and we need to prepare,’” says Robert Kelly, Fort Monroe historian.

That first fort burned down by August 1619, when a pirate ship flying a Dutch flag arrived carrying 20 Africans. It was the White Lion.

“John Rolfe, who was the secretary of the colony, he records this event,” Kelly says.

Rolfe, also known for being Pocahontas’ second husband, records a ship carrying, “not any thing but 20 and odd Negroes,” arriving at Point Comfort. There were no written laws governing slavery at the time. Rolfe notes that the Africans were traded for food and supplies.

“When someone is documented as traded as property, that certainly implies a loss, a lack of freedom,” Kelly says.

Rolfe’s note has been enough to get Fort Monroe federal status as the arrival site of the first Africans. But when Calvin Pearson was growing up in Hampton, the town that surrounds Fort Monroe, he says no one knew about the arrival at Point Comfort.

“People ask me why is the landing’s so important,” he says. “And I tell them that, to me, it's like your birth. You can only be born one time. Nobody can change that fact to fit their propaganda or marketing or promotion or tourism needs.”

Pearson’s talking about Historic Jamestown, an attraction with colonial archeological sites and reconstructed buildings. He says people thought the first Africans arrived there. So Pearson founded a group called Project 1619. It’s been working for more than two decades to raise awareness that the first Africans’ arrived at Point Comfort.

“We knew eventually the 400-year anniversary would come,” he says. “It was important just to start this movement 25 years ago because if we had not, the story we were telling today — the commemoration that Virginia is starting to promote — would have taken place at Jamestown.”

“They certainly arrived at Point Comfort; we have John Rolfe’s source for that. But there’s no mention in the sources that the Africans actually landed here,” says James Horn, president and chief officer of the Jamestown Rediscovery Foundation.

He thinks they were probably kept on the ship at Point Comfort, so they wouldn’t have a chance to escape. Horn says it’s likely buyers rowed out to the ship to barter on board, then returned with the slaves to Jamestown. The next census shows several living there, along with Africans from the White Lion’s sister ship, the Treasurer.

“We have at Jamestown without any question, a site where one of those first Africans, Angela, lived,” Horn says. “And I think that, without taking anything away from Point Comfort or Hampton, in terms of that’s where the ships stopped en route, what’s significant to me is we might learn more about the African experience by looking the actual places they did live, rather than simply a place where two ships arrived.”

Robert Kelly, the Fort Monroe historian, says research is still being done. There are a lot of archival records that no one has gone through yet. But he says the arrival of the first Africans at Fort Monroe seems to fit when you consider the other big role this place played in history.

“On the same site that slavery began, you see it beginning to unravel,” he says. 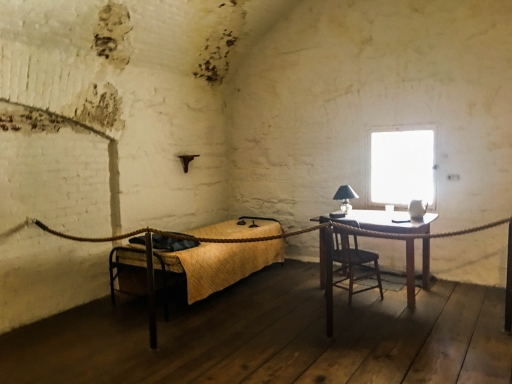 The cell Jefferson Davis, the president of the Confederacy, was held in at Fort Monroe after the Civil War.

During the Civil War, Fort Monroe stayed in the Union — even though Virginia had seceded, and the fort was south of the capital of the Confederacy, Richmond, 100 miles up the James River. Things were tense.

In May 1861, on Major General Benjamin Butler’s second day commanding the fort, the first enslaved Africans arrived asking for freedom. Three of them stole a boat and made the roughly three-mile trip by night from Norfolk to Fort Monroe.

“Butler interviews each of the men and has to decide what to do,” Kelly recounts, “when a representative for their owner, actually a Confederate, appears here the following day.”

Butler tells the owner that since the enslaved men had being digging ditches for the Confederacy, they would be seized as “contrabands of war.” With that decision, Fort Monroe became known as a safe haven. It was far from perfect, but 10,000 escaped slaves came and set up camp at the fort, building the foundation for a community that remains today. They called Fort Monroe “Freedom’s Fortress.”

“And then, you know, Jefferson Davis, the president of the Confederacy, after the Civil War, he’s imprisoned here,” Kelly says. “That cell right there.”

Davis was held at Fort Monroe for a year and a half. Then he was released on a $100,000 bail, but he was never brought to trial.

Fort Monroe continued on as an army base, then a museum. In 2006, it was slated for closure, until 2011, when then-President Barack Obama designated it a national monument, citing Fort Monroe’s history as the arrival place of the first Africans and its role in the Civil War. Obama mentioned that the designation would be an important economic boost to the region’s tourism.

Fort Monroe has received a $300,000 grant for a new visitor’s center, with a big exhibit about the first Africans. But there’s still a lot of work to do to get ready for what they hope will be a rush of tourism in 2019.

“So you’ve seen all these events, all these people who worked so hard to get to this point, and now we’re here,” Kelly says. “It’s an American story that relates us to other sites across the country. It’s part of a larger historical narrative.”