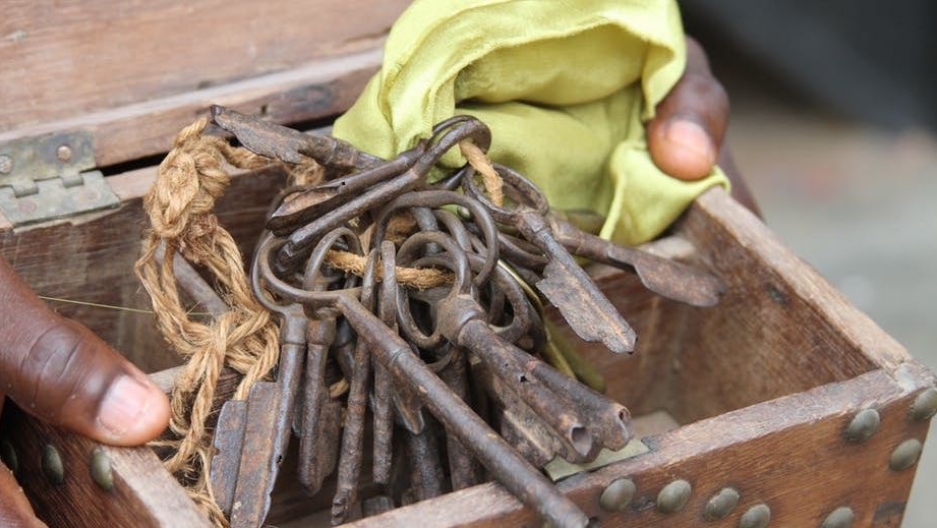 The 26 silver keys to Christiansborg Castle.

“Yes, you can see the keys. But, you must make an appointment and come back another day. After all, now that we know who you are, for all we know, you may have come to collect the keys from us, and take them back to Denmark,” Nana Samanhyia Darko II, the Gyaasewahene (chief of staff) mischievously chuckled.

As instructed, exactly one week later, I sat at Bogyawe Palace in Akwamufie, the Akwamu capital, anxiously waiting to see the paramount chief, Akwamuhene Odeneho Kwafo Akoto III, to request permission to see the keys to Christiansborg Castle.

As a Ghanaian descendant of Carl Gustav Engmann, a Danish governor at the castle (1752-7), I was conducting archaeological excavations at the site. Hence, the Gyaasewahene’s comments.

Collectively, the keys to Christiansborg Castle comprise 26 keys made of silver. They lie in an old, small, wooden box called apem adaka (a box with a 1000 pieces of gold), since formerly used to store gold and gold dust.

The story of how Christiansborg Castle’s keys come to be at the Bogyawe Palace is an intriguing one.

The story is as follows.

The Akwamu Empire (1600-1730), at its acme, controlled a territory extending 200 miles along the coast and 100 miles into the interior, with Nyanaose as its capital. The Akwamu controlled the gold, ivory and slave trade routes from the interior to the coast. By 1670, the Akwamu directed their attention to Accra, which had become an important trading center where Portuguese, Dutch, English, Swedes and Danes engaged in coastal trade. In 1681, the Akwamu took over Accra. They began to strategize to take hold of all the forts and castles on the coast.

Christiansborg Castle was vital to this plan.

In 1693, Asameni, an Akwamu royal, planned to seize control of the castle by way of a cunning ruse. A successful trader and warrior, Asameni moved to Accra, became proficient in the Danish language and disguised himself as a cook and interpreter to secure work at the castle. He studied the site, and its occupants and operations, including the ships’ arrivals and departures as well as those of traders, merchants and others who worked and visited the castle. 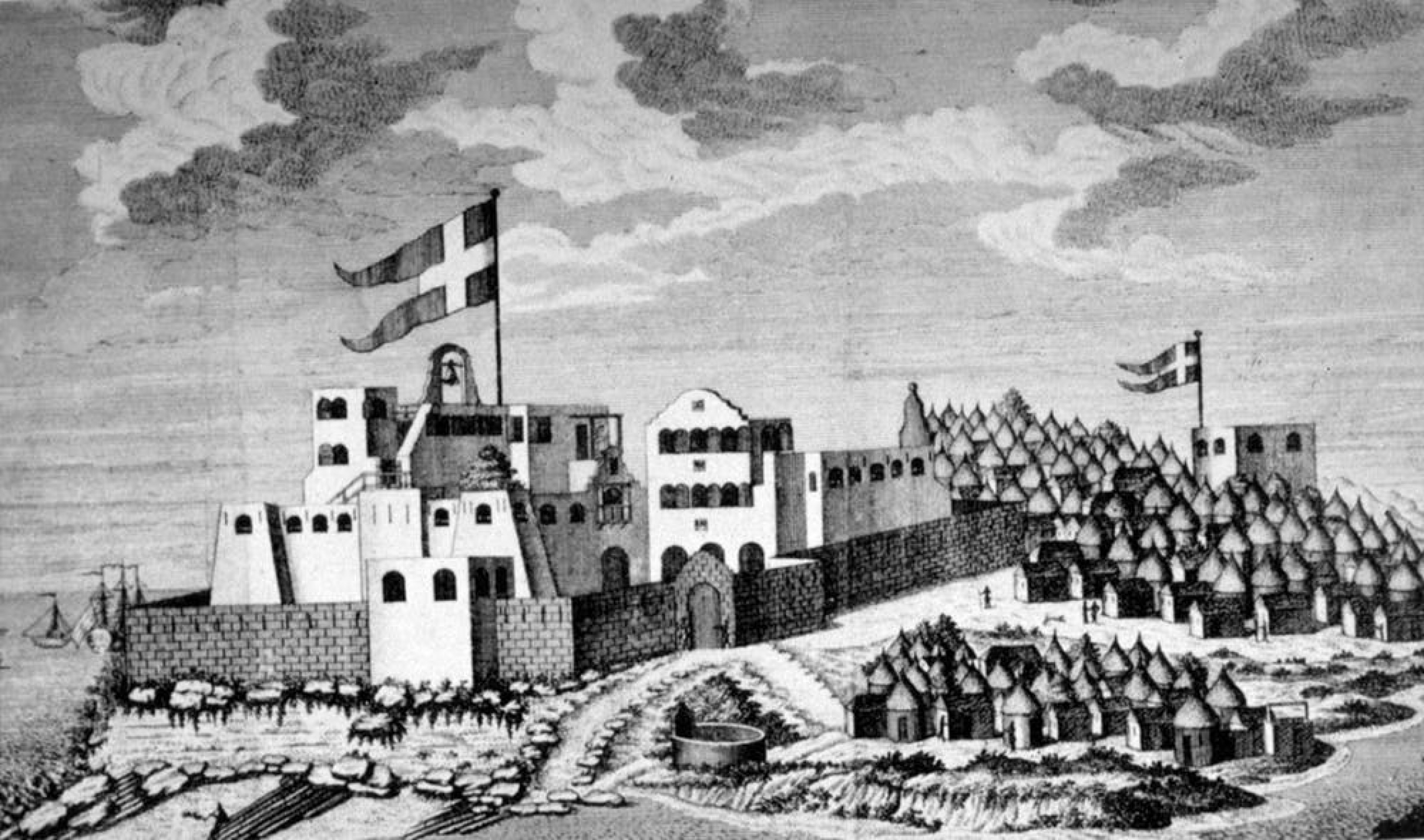 A contemporary drawing of Christiansborg Castle in Accra.

Courtesy of the Danish National Archives

Asameni informed the Danes that he would escort a group of Akwamu traders to purchase ammunition. In June 1693, Asameni and 80 armed men impersonating traders entered the castle. Since it was accepted practice to test merchandise prior to purchase, the men were given ammunition. But they’d also hidden ammunition, powder and shots under their clothes.

Once in the castle, the Akwamu attacked the unsuspecting Danes. A fierce battle ensued. Severely wounded, Gov. Janssen escaped to nearby Fort Crevecoeur. Many Danish merchants and officials were injured, and some were taken to Akwamu as captives. Asameni and his men captured the castle. 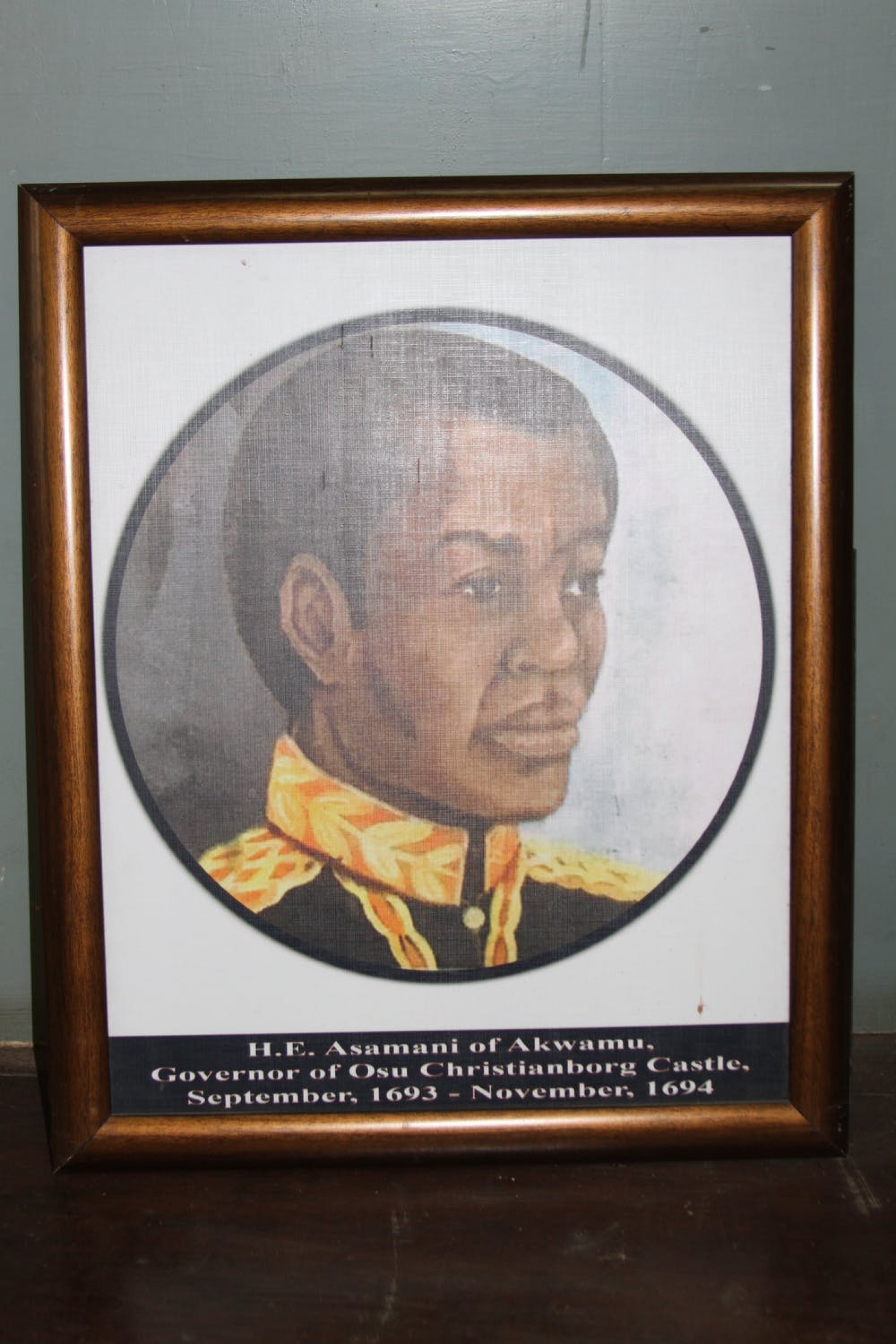 Asameni appointed himself governor of Christiansborg Castle and donned a Danish governor’s uniform. He replaced the Danish with the Akwamu flag. The Akwamuhene kept the castle’s keys as a trophy, but Asameni kept its merchandise, worth 1,400 gold marks. He invited English and Dutch ships’ captains to trade with him at the castle, where he entertained them lavishly, and frequently ignited canons in their honor.

Asameni occupied the castle for a year and a half, until negotiations resulted in the Akwamu returning the castle and captives to the Danish, in exchange for 1,600 pieces of silver.

The Akwamu seized Christiansborg Castle so that they could dictate trade terms between themselves, African traders from the interior, and Europeans on the coast. They understood the financial rewards accrued from the gold and slave trades. Besides, the castle was on Akwamu-controlled land. And eventually they wanted to take hold of all European coastal fortifications.

The Akwamu participated in the Danish transatlantic slave trade with the stipulation that no Akwamu be enslaved.

Yet, later, many Akwamu, including royals, were transported to the Danish West Indies, enslaved and worked on plantations under brutal and dehumanizing conditions. For instance, in 1733, 150 enslaved Akwamu launched a rebellion on St. John’s island that lasted six months. It was eventually crushed. As punishment, men and women were burned slowly to death at the stake, sawn in half, impaled and had their heads and hands cut off after torture with hot pinchers. Others committed collective suicide.

Ultimately, the Akwamu did not accept a subordinate status.

A bronze statue is dedicated to Asameni, the brilliant strategist, and his capture of the castle. Wearing a batakarikese (woven smock), symbolizing his army of warriors disguised as traders, his left leg rests on a canon accompanied by cannon balls, symbolizing the European forts and castles. Asameni holds a Danish flintlock gun in his right hand and a bunch of keys in his left hand.

The story of Asameni and Christiansborg Castle’s keys reveals the complexities of African agency during the trans-Atlantic slave trade, in particular, resistance and collaboration. 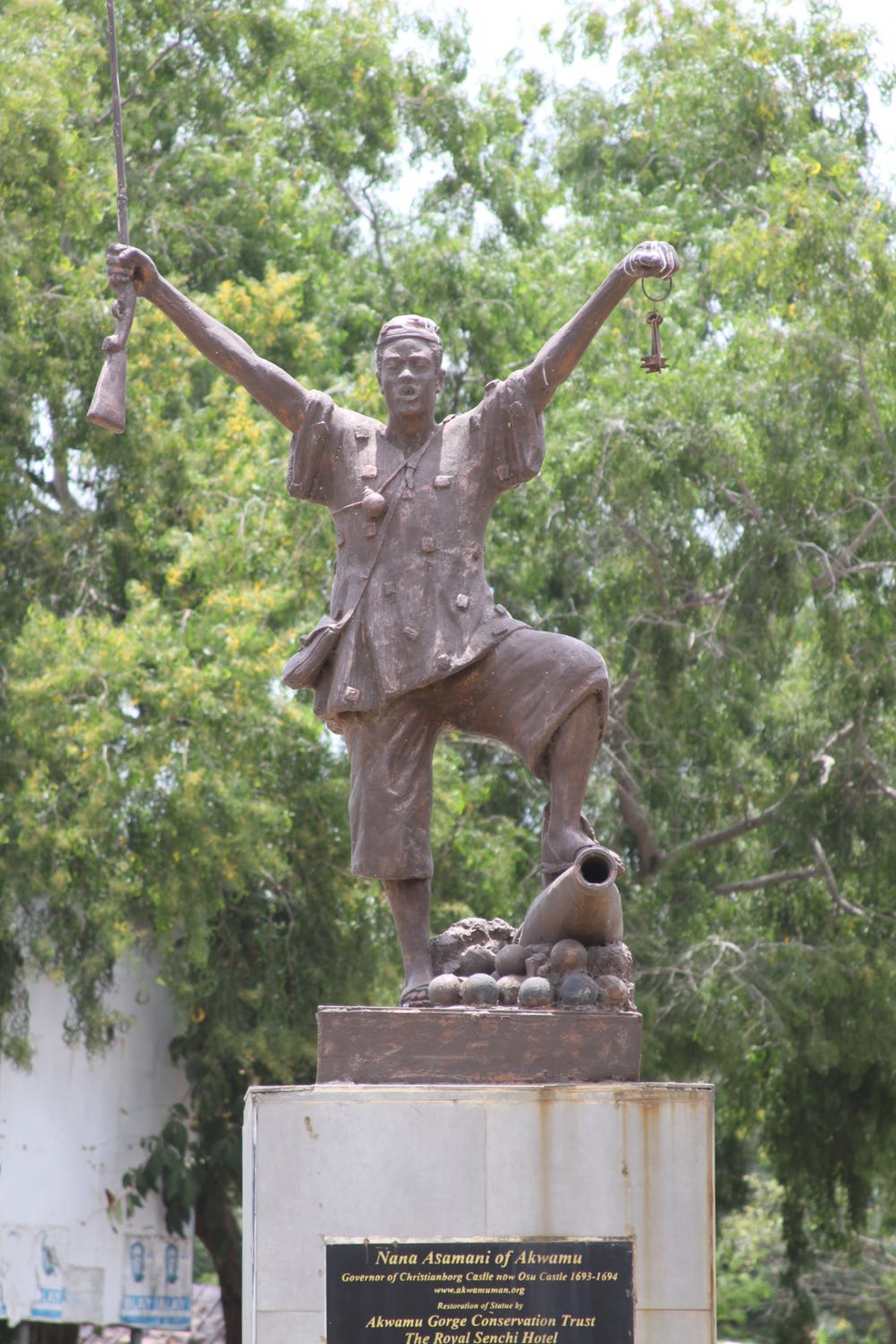 The keys to the castle provide material evidence that the Akwamu Empire seized power from the Danes and as a consequence influenced the terms of the trans-Atlantic slave trade.

This article is republished from The Conversation under a Creative Commons license. It was written by Rachel Ama Asaa Engmann, an assistant professor of African Studies, archaeology, anthropology and critical heritage at Hampshire College, who adds: I am most grateful to Akwamuhene Odeneho Kwafo Akoto III. Thanks also to Nana Samanhyia Darko II.