Nana Assenso stands at the grave of his uncle, remembering the man he loved but also a past that has haunted his family for generations.

His uncle was called Kwame Badu, a name that has been passed on through the family in remembrance of an ancestor with that name who was captured and sold into slavery long, long ago. 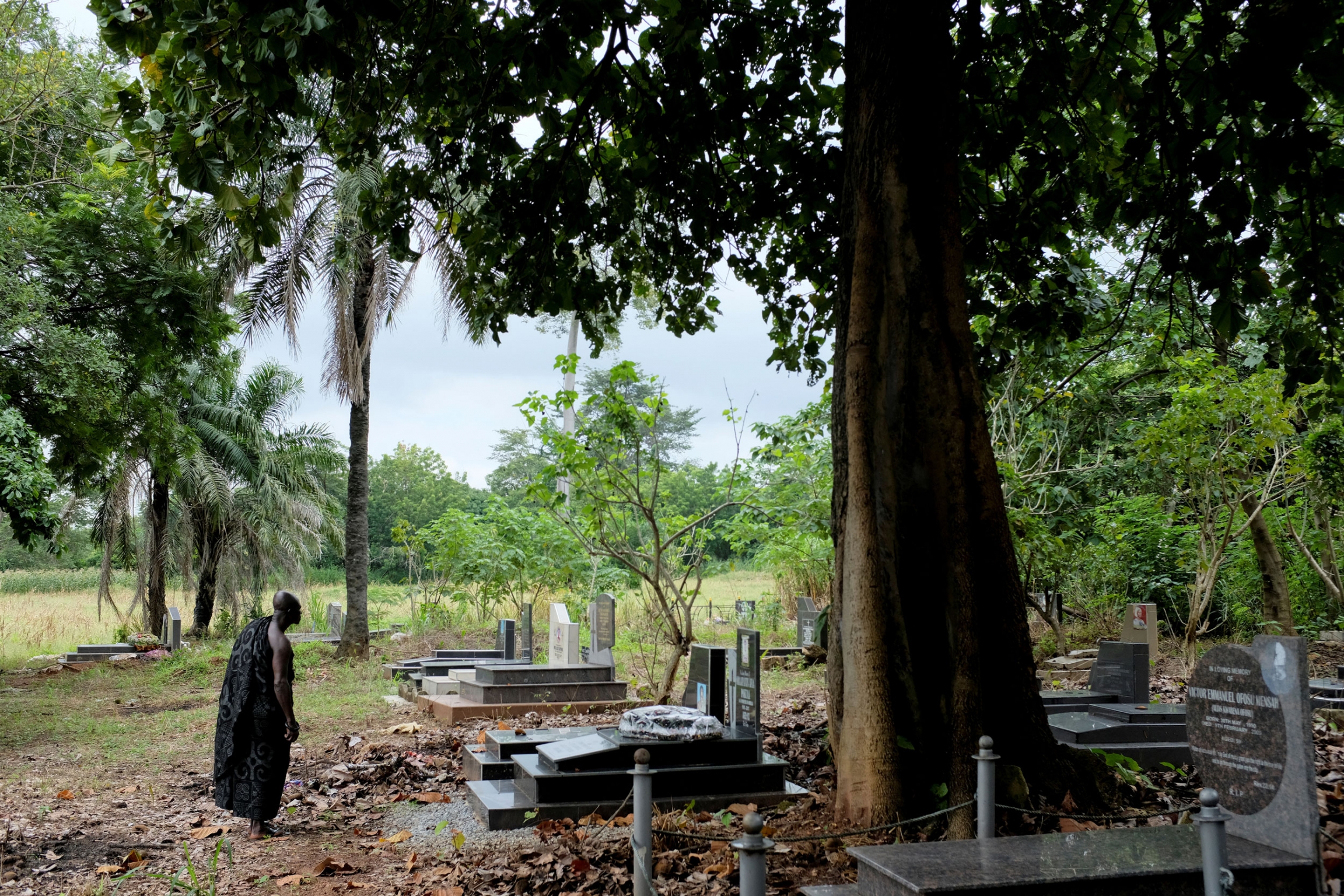 Assenso visits the grave of his uncle.

"Growing up, I was told the story of two of my great-great-grand-uncles Kwame Badu and Kofi Aboagye who were captured and sold into slavery," says Assenso, 68, the chief of Adidwan, a village in Ghana's interior. He followed the family tradition and named his youngest son Kwame Badu. 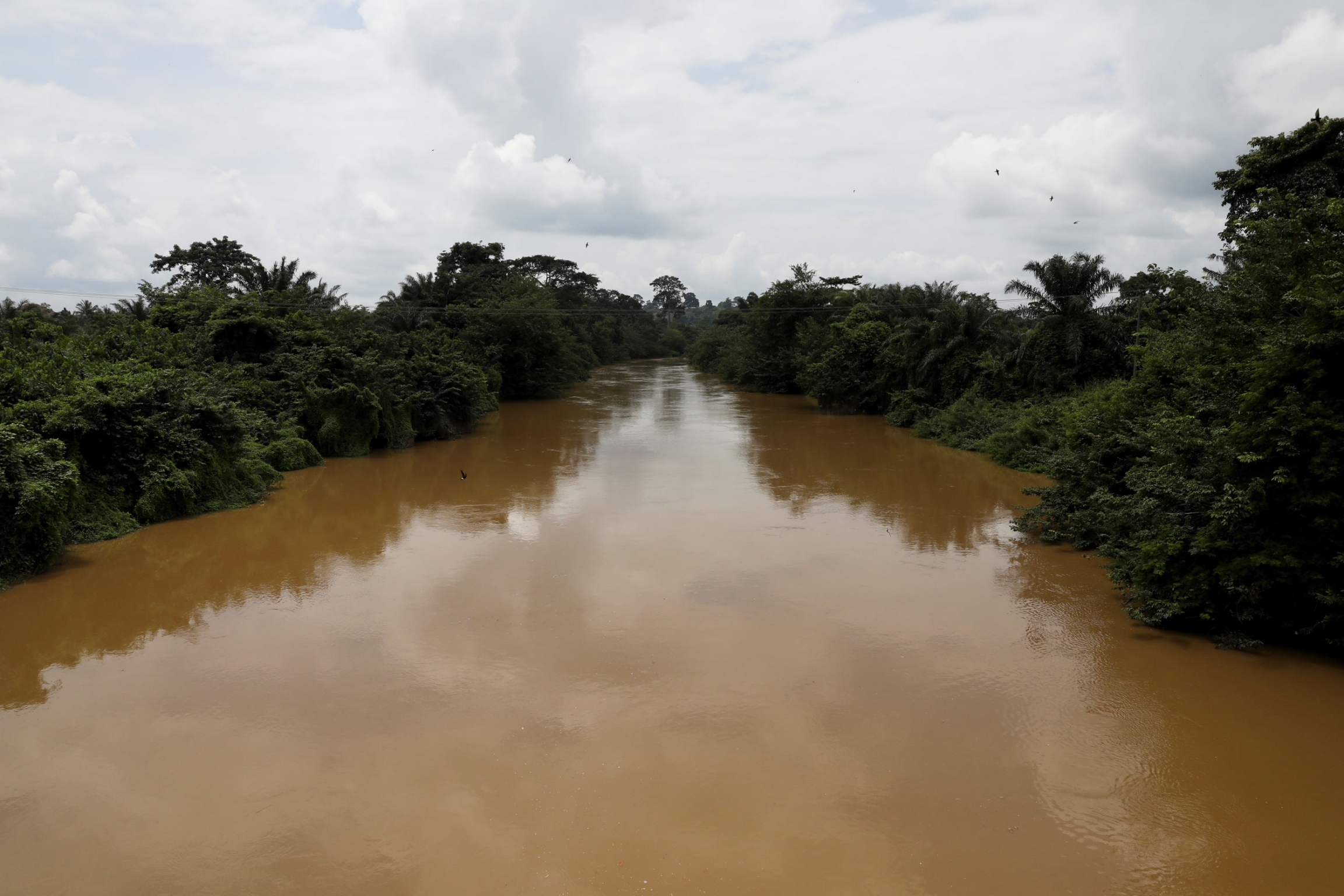 The River Pra which runs parallel to the Assin Praso heritage village.

This month marks 400 years since the first recorded enslaved Africans arrived in North America to work plantations in English colonies. In the centuries after, European slave traders shipped millions of African men, women and children across the Atlantic Ocean. Many died in horrific conditions on the slave boats, while survivors endured a life of misery and backbreaking farm work.

Related: How Africans forgot — and remembered — their role in the slave trade

For some of them, the terrible journey began here, deep inside Ghana. Captured by slavers, they were marched along dirt tracks for 125 miles to slave castles perched on the Atlantic Coast, where they boarded ships for North America. They never saw their homeland again. 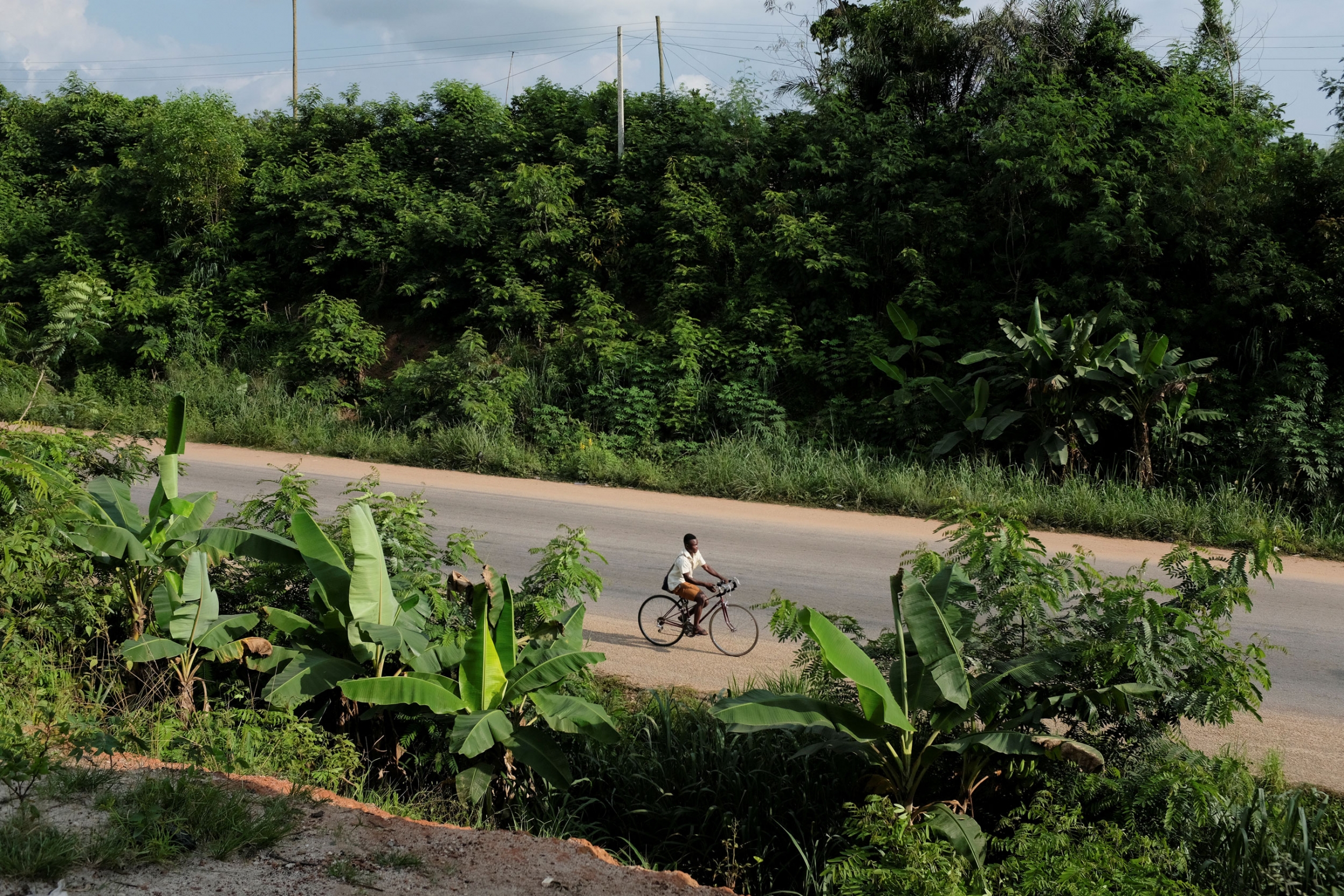 A boy rides a bicycle along a road in Denyase, Ghana.

From here in Adidwan, the slaves were forced south, passing through the gold-mining town of Obuasi.

Kwaku Agyei is a pastor and elder in Obuasi. He tells the story of the slave trade to young workers in his neighborhood, the indignity of it mixed with pride in his ancestors. 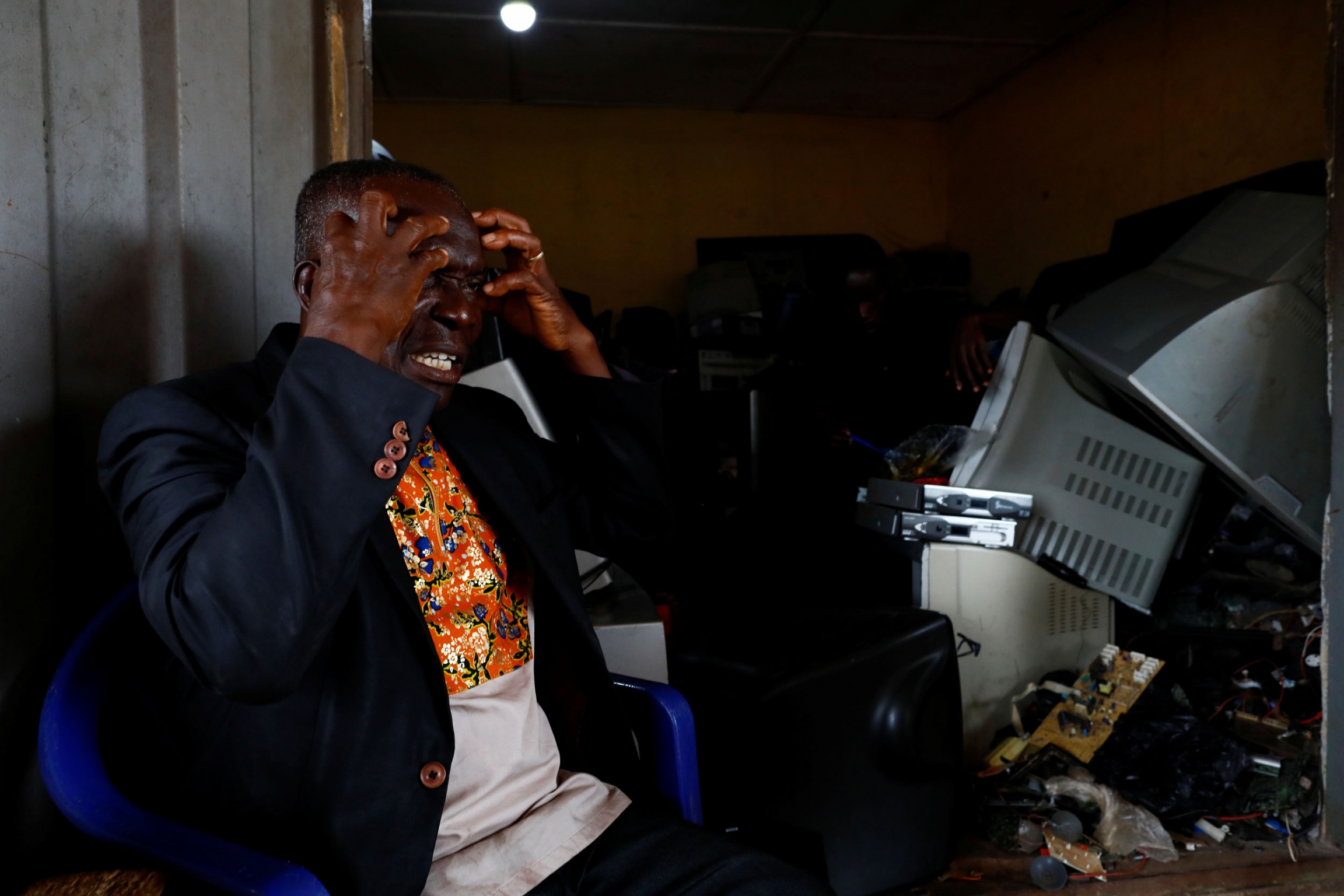 "They captured us because they realized we were very strong," the 71-year-old says. "They sent our ancestors to work on sugar plantations. The slave trade made us realize that the white man was cruel."

But many rulers of West African empires, such as the Ashanti kingdom, whose descendants still live in this part of modern-day Ghana, also profited, selling captured slaves in exchange for guns, cloth, alcohol and other Western manufactured goods.

"Our elders exchanged their children for 'nice things' like matchboxes," Agyei says.

But once again, his pride in his heritage shows through. "I can say our ancestors were the ones who developed America," he says. 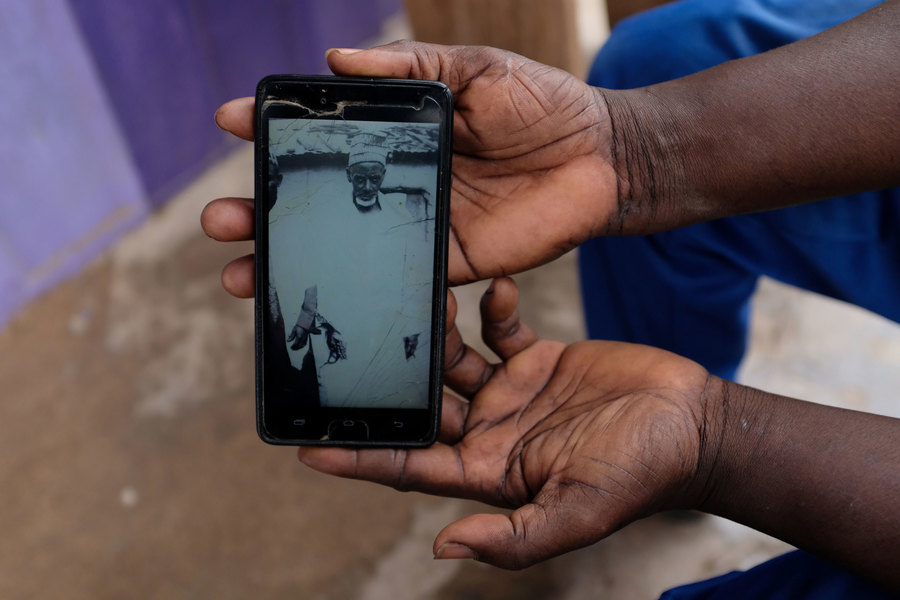 Shaibu shows a photograph of his grandfather.

Abdul Sumud Shaibu, 50, also lives in Obuasi and tells of his strong ancestors. He shows a photograph of his grandfather that he saved to his mobile phone. "My ancestors were giants," he says. "They were well-built and strong. Look at the height of my grandfather in this picture." 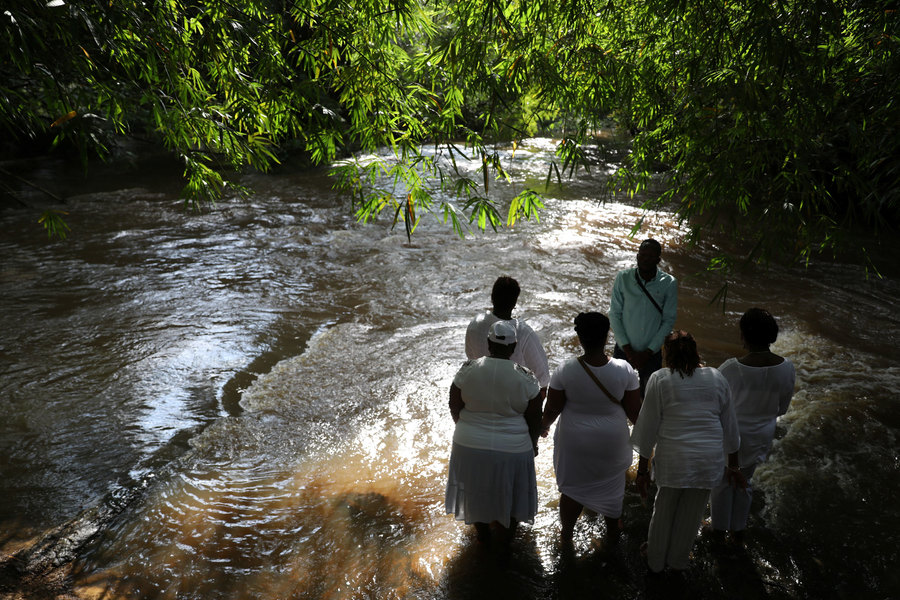 Near the journey's end in Ghana, the captives were given a last, ritual bath in a river before being sold. Today, the Assin Manso site is a sacred place of remembrance. In this area of mangrove swamps, an image of slaves chained by the feet promises, "Never again."

In the river, 75-year-old New Yorker Regis Thomson sits within circle with five other women from her church and prayed.

"When I think of what my ancestors had to go through ..." the US tourist says, adding that she would go back and tell of her experiences so today's children are made aware of their past. "We have a lot of work to do." 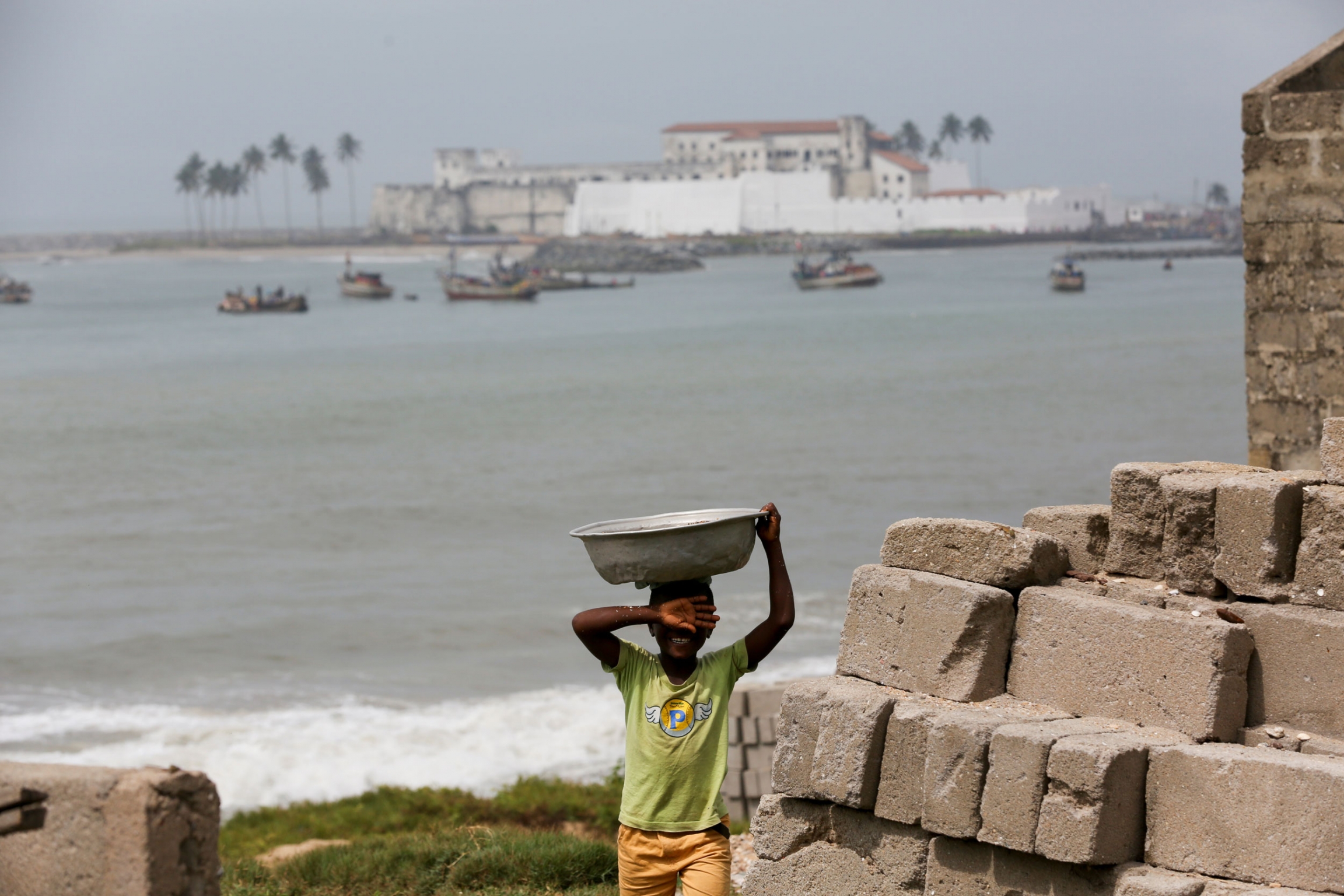 Elmina Castle is seen in the background.

After they bathed in the river, the captives were then taken on the final leg of their journey in Ghana, to the last place they'd ever see in their homeland: slave forts on the Atlantic like the Cape Coast and Elmina castles. 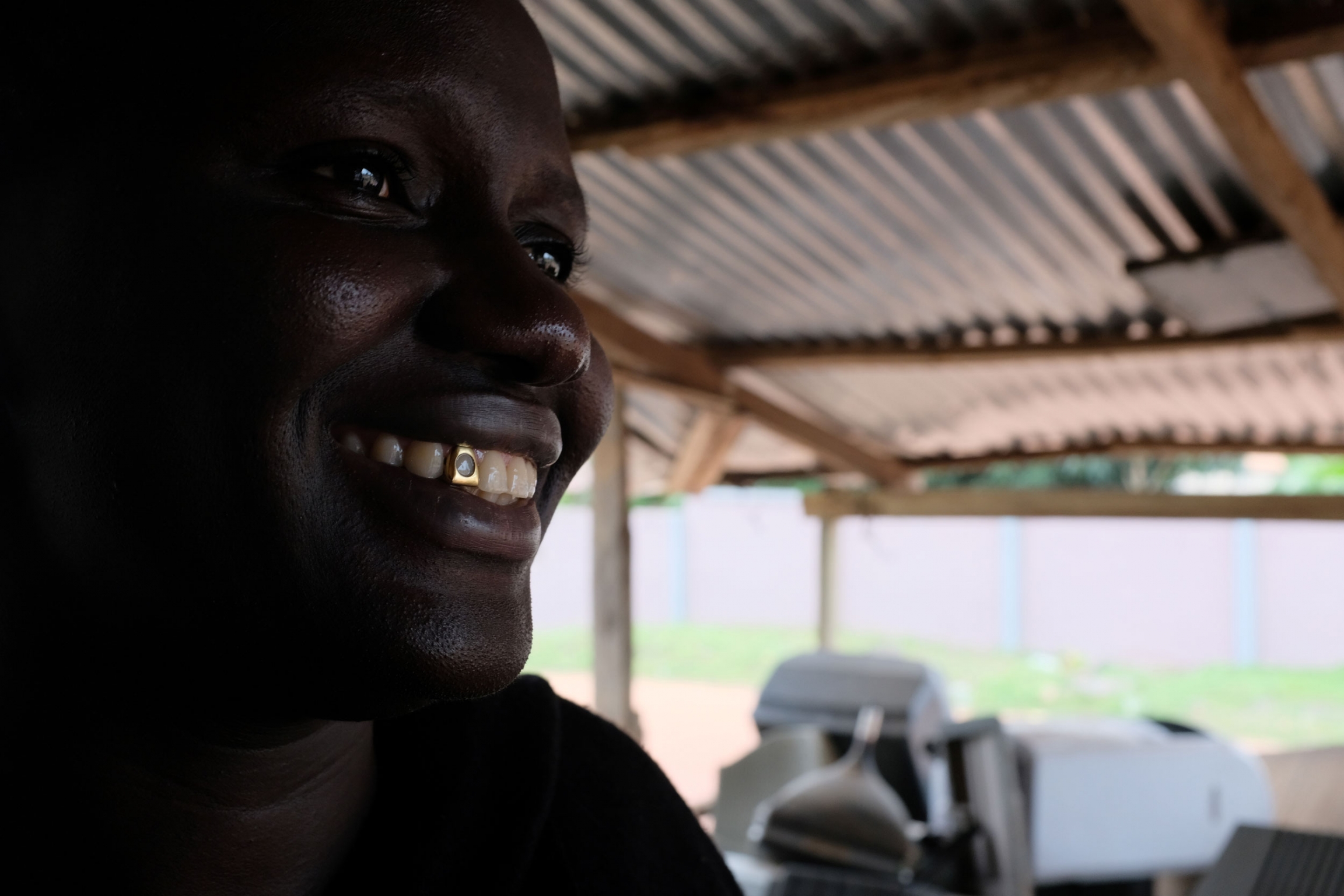 Saviour Asante, 30, a hairdresser in Obuasi, had given little thought to slave history growing up. That changed with a visit to Cape Coast castle. "I cried the whole day," she says. "It was a very painful experience to hear these stories." 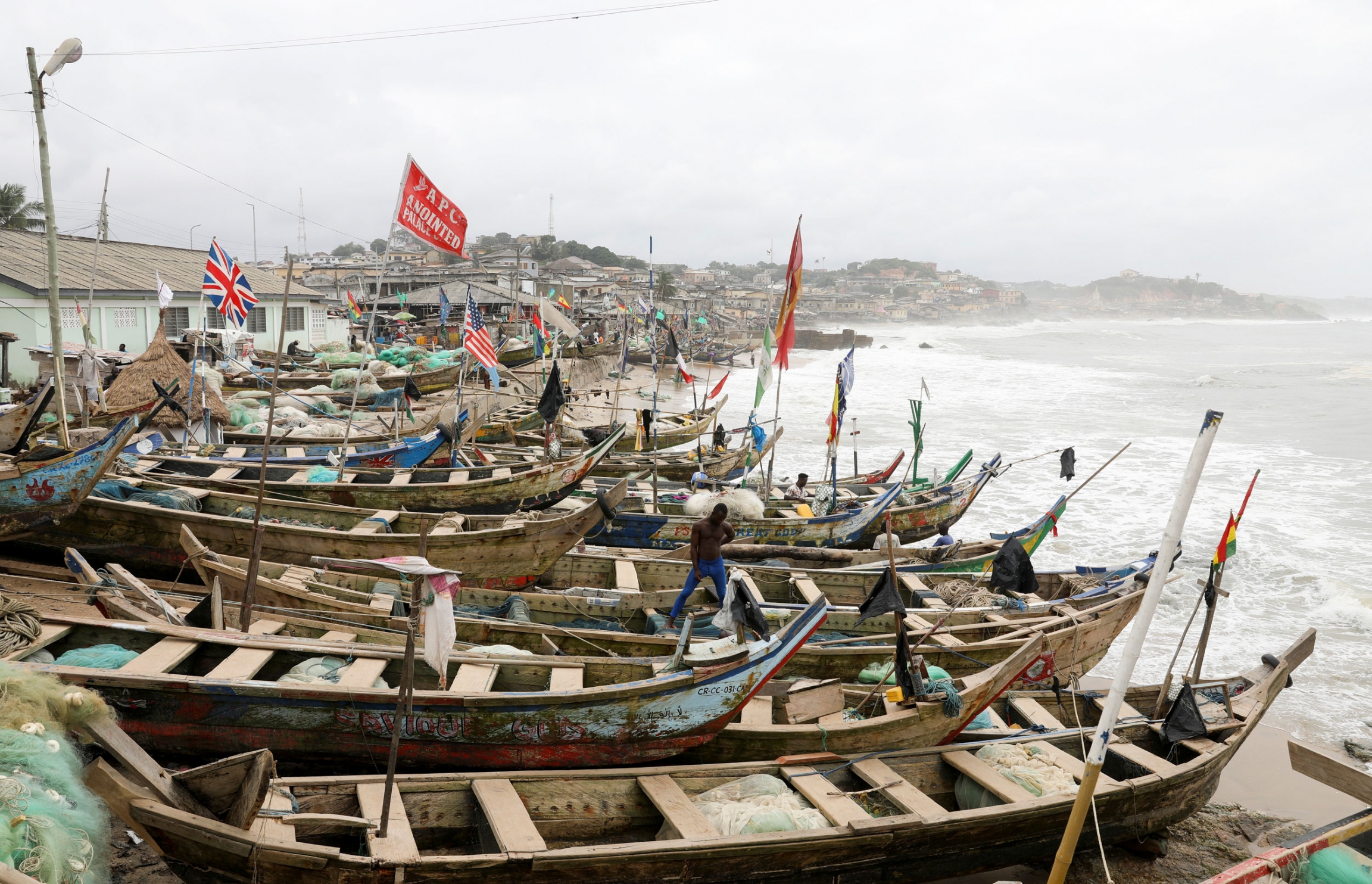 British and American flags are among other flags hoisted on fishermen's boats at the Cape Coast Castle.

From the castles, where European authorities lived in comfort right above the dungeons that held the slaves, the captured Africans walked through the Door of No Return onto the ships that would take them to America. 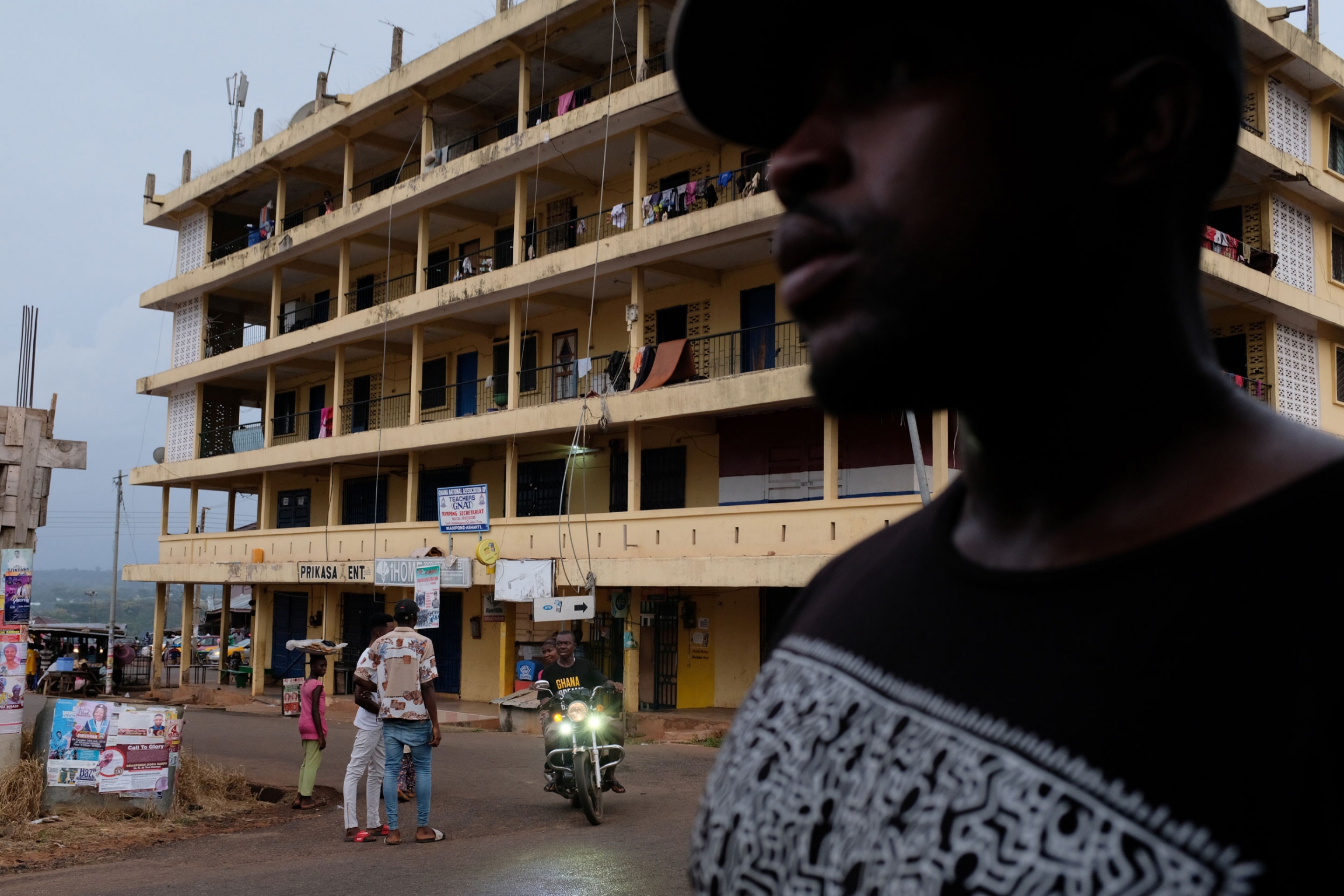 A man walks past a torn-down colonial building in Mampong, Ashanti Region, Ghana.

By Siphiwe Sibeko and Francis Korokoro/Reuters