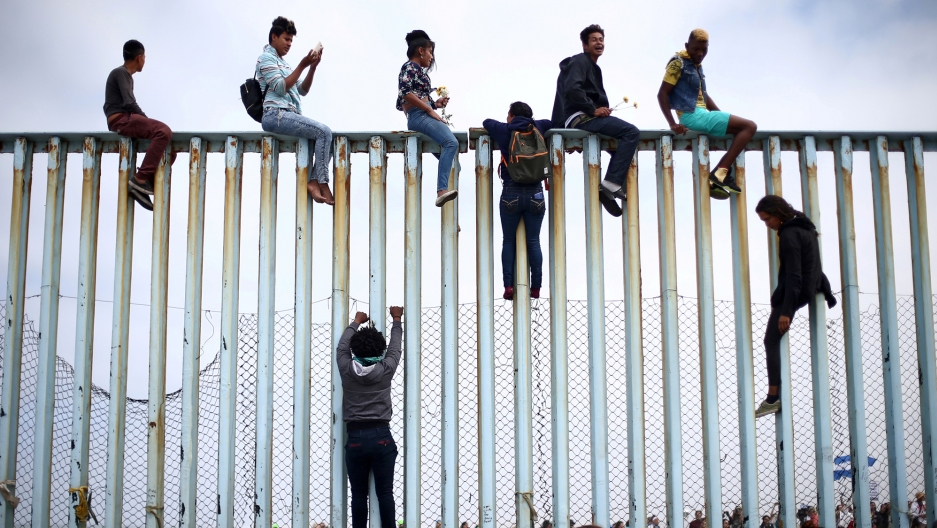 Members of a caravan of migrants from Central America climb up the border fence between Mexico and the US as a part of a demonstration prior to preparations for their asylum requests.

It’s been a big year, to say the least, for immigrants and immigration policy in the United States. Here are 10 moments that stood out.

There were several pivotal moments here. The “zero tolerance” policy of criminally prosecuting illegal border crossers, which resulted in migrant children being taken from their parents, had quietly taken place since at least mid-2017, but it was formally announced in April 2018. On June 18, Homeland Security Secretary Kirstjen Nielsen tweeted, “We do not have a policy of separating families at the border. Period.” Two days later, after public outcry, President Donald Trump issued an executive order ending the policy. A federal judge ordered the US government to reunite the families by July 26, which did not happen in dozens of cases. In fact, as ProPublica and other outlets reported this fall, family separations at the border continue.

Related: This mother, already deported, doesn’t know if she’ll be reunited with the daughter taken from her at the US border

Throughout 2018, the Trump administration announced it would end Temporary Protected Status, or TPS, for hundreds of thousands of immigrants who have lived legally in the US for years after fleeing natural disasters and political crises. Without being able to renew TPS status, they’ll face deportation when it expires for their respective country. In October, a federal judge temporarily halted the administration’s plan to end TPS. The Justice Department is appealing the decision, which means most TPS beneficiaries are still unsure of whether or not their status will be ended.

Related: As Trump ends Obama-era protections for Salvadorans, a family in Minnesota has few options to stay together

Court after court this year blocked the Trump administration’s attempts to end DACA, which temporarily protects more than 600,000 undocumented young people, brought to the US as children, from deportation. In November, the Ninth Circuit Court of Appeals upheld a lower court’s pro-DACA ruling. The program is likely headed to the Supreme Court in 2019.

Related: How this undocumented lawyer is breaking more ground with no safety net

Fiscal year 2018 was not a good one for US refugee admissions. Fewer than 22,500 refugees were allowed into the United States, a historic low that fell short of the admissions ceiling of 45,000 and was well below the previous 110,000 cap set by former President Barack Obama. In October, the Trump administration announced a further cut to the refugee admissions ceiling — down to 30,000 for fiscal year 2019 — and resettlement agencies say the number of refugees who manage to arrive in the country will be even lower.

The high court’s 5-4 decision upheld Trump’s third executive order banning travel to the US for citizens of five Muslim-majority countries — Yemen, Iran, Libya, Somalia and Syria — and rejected claims the ban was motivated by “religious animus” towards Muslims.

6. Trump orders US troops to the southwestern border

In the lead-up to the midterm elections, Trump ordered active-duty US troops to the border to protect the country from what he characterized as an “invasion” as a self-described "caravan" of Central American migrants made its way toward the US. More than 5,000 troops took positions in Texas, Arizona and California in the rare instance of a non-wartime, active-duty deployment on US soil. Their deployment is set to end in January.

Related: US troops’ arrival prompts unease on both sides of the border in Arizona

7. Immigrants and their advocates win big in midterm elections

Campaign season got ugly as candidates — and Trump — debated questions of American identity and belonging in the United States. Immigrant candidates themselves broke records, continuing a long history of immigrants running for office in the US. The midterms resulted in Democrats winning a majority in the House of Representatives, as well as losses for candidates at the federal, state and local levels who favored restrictive immigration policies.

Related: After an ugly campaign for immigrants, some midterm wins spark glimmer of hope

Nationwide, the number of unaccompanied migrant children in detention skyrocketed to 14,700 in December following several policy changes by the Trump administration. Legal advocates said the increase was due, at least partially, to stricter vetting procedures for adult “sponsors” — typically the children’s own parents or relatives — in the US who come forward to claim them from detention. The stricter vetting includes an “information-sharing agreement” put in place this spring between the Department of Health and Human Services, which is charged with caring for the children in detention, and the Department of Homeland Security, which oversees immigration enforcement. The agreement resulted in more arrests of sponsors, who are often undocumented themselves. This month, the Trump administration backed off its fingerprinting requirement for sponsors.

Related: What reporters couldn’t see when they toured a Texas shelter for child migrants

9. Trump tries to remake the US asylum system

The Trump administration tried various tactics to keep asylum-seekers out of the US in 2018. It issued guidance narrowing the definition of “credible fear” — a standard used in initial asylum screening processes. Customs and Border Protection officers increased their use of  “metering,” a practice limiting the number of people who enter the US at official ports of entry. In November, Trump tried to temporarily ban asylum-seekers altogether if they crossed into the country illegally (a court struck down the ban). This month, the administration announced a new policy where asylum-seekers are to ‘remain in Mexico’ for months or years until their asylum claims wind their way through US courts. Many of these asylum policies face court challenges.

10. Two children die in Border Patrol custody, and another dies just after leaving

An 8-year-old Guatemalan boy, Felipe Alonzo-Gomez, died early Christmas Day after being detained by Border Patrol agents in Alamogordo, New Mexico. It is the second such death to occur in the El Paso sector of the CBP in less than one month. Jakelin Caal Maquin, a 7-year-old from Guatemala, died in Border Patrol custody in Texas in mid-December. Earlier this year, another immigrant girl, Mariee Juarez, died shortly after leaving a family detention center in Dilley, Texas. The deaths have led to harsh scrutiny of Customs and Border Protection practices. In response, CBP is medically screening all children in its custody this week.