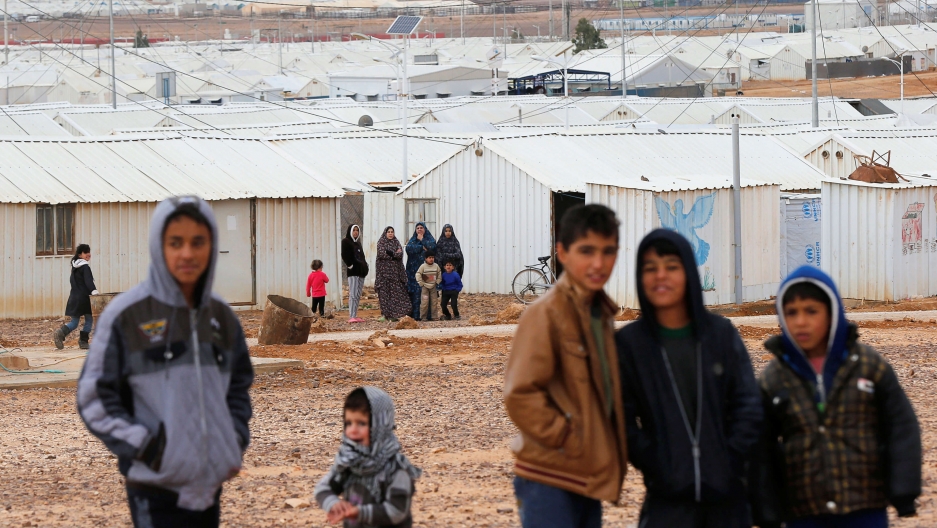 Syrian refugees look at the camera as they stand in front of their homes at Azraq refugee camp, near Al Azraq city, Jordan, Dec. 8, 2018. Under the Trump Administration, America is closing its doors to refugees. US refugee caps have been steadily slashed from 110,000 a year under the Obama Administration to 30,000 next year.

On a recent Sunday afternoon in Los Angeles, California, families gathered in a park to enjoy the sunny day and each other’s company. As they played games and gathered around tables of food, it looked like an idyllic American scene. But many who came to the gathering were refugees who’ve recently arrived in the United States, fleeing violence and persecution in some of the world’s most dangerous countries, like Afghanistan, Iraq and Syria.

“We walked, me and my family and my wife and four kids, we walked from Syria to Jordan, and we went to the camps of the refugees in Jordan," said Ayman Issa. Issa’s a former barber from Damascus, Syria, who was driven out of his country by its bloody civil war.

Issa, though, is lucky because he petitioned to come to the United States as a refugee and was accepted. But that’s becoming increasingly rare.

Under the Trump administration, America is closing its doors to refugees. US refugee caps have been steadily slashed from 110,000 a year under the Obama administration to 30,000 next year. That would be the lowest number of refugees admitted since 1980.

“Yeah, I think it’s no secret it’s been a 180-degree change," said Martin Zogg, the executive director of the Los Angeles office of the International Rescue Committee. It resettles refugees in Southern California, helping them with basics like finding an apartment and employment.

Zogg said as the US reduces its refugee caps, the number of people his office assists has plummeted.

“It’s translated into reducing the number of refugees to a tenth of what we anticipated,” said Zogg.

Typically, Zogg’s office would resettle between 2,500 and 3,000 refugees, but this year it will be closer to 400, and next year even less than that.

Related: How 16 Americans found family, faith and their immigrant roots — generations after their parents left their homelands

But at least Zogg’s office is still open. Five out of nine refugee agencies in the LA area have closed because of reduced refugee numbers. And those that remain open are cutting back services.

“And as we go forward, it’s likely that we’ll see even further reductions here,” said Zogg.

Ayman Issa said that although he’s happy to be in the United States, he thinks frequently of all the refugees who now won’t be able to get into the country because of the Trump administration’s increasingly hard line on refugees. Knowing what it’s like to feel the desperation of a refugee, Issa believes they’ll lose all hope.

“Sometimes when you haven’t any hope for life and all the doors are closed in front of you, yeah, sometimes you prefer the death,” he said.

But even as refugee numbers are cut, some believe this creates opportunities for refugee agencies to think more creatively about how to help newcomers to the US.

“We want to make it easy and enjoyable for people to get involved to directly help their resettling neighbors,” said Miry Whitehill, a former marketing and advertising executive who founded Miry’s List, a refugee aid group, in 2016.

Miry's List organized the gathering at the park, which brought together refugees with American families.

Whitehill believes big refugee agencies can be more nimble and create a pro-refugee constituency in the US by harnessing social media and crowdsourcing, so Americans can meet and directly help refugees.

“What we focus on are the things that make people feel alive," said Whitehill. “Intervening is the difference in their arrival being a continuation of their refugee experience versus the end of the refugee experience — and the beginning of their new life here in America.”

But as the US reduces refugee numbers, he wishes elected officials could look beyond the politics of the issue and see refugees as ordinary people trying to find a better — and safer — life.

“Actually, I hate politics,” Issa said. "Actually for me, I hate borders. It is earth. It is for everybody, I think.”