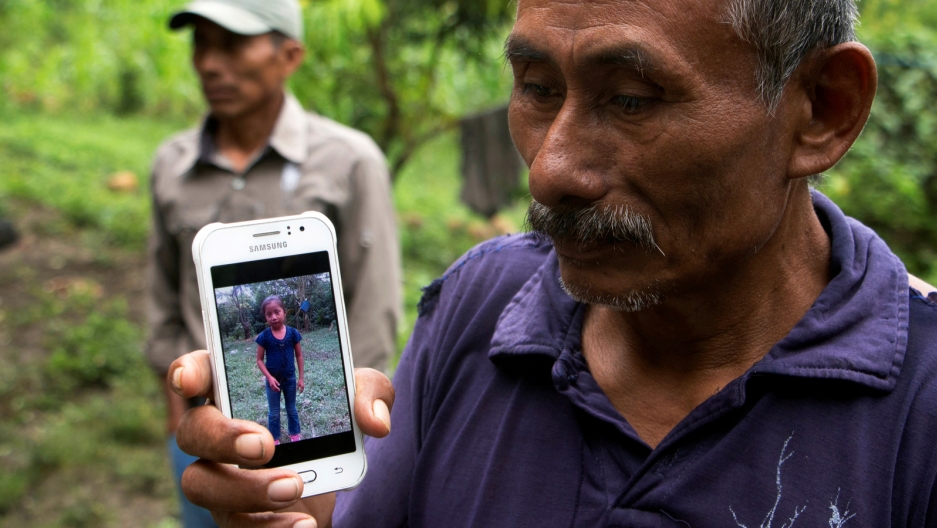 Domingo Caal, 61, grandfather of Jakelin, a 7-year-old girl who died in US custody, holds his mobile phone with a picture of his granddaughter as he stands outside her house in Raxruha, Guatemala, Dec. 15, 2018.

To hear US officials tell it, there is only one person responsible for the death of Jakelin Caal Maquin: her father. But Jakelin did not die while making the journey. She died afterward, on US soil, while in Border Patrol custody with her father.

On Friday, White House Deputy Press Secretary Hogan Gidley called the 7-year-old Guatemalan migrant girl’s death “a horrific, tragic situation,” adding: “Does the administration take responsibility for a parent taking a child on a trek through Mexico to get to this country? No."

Secretary of Homeland Security Kirstjen Nielsen said, “We cannot stress how dangerous the journey is when migrants come illegally.”

In a statement, US Customs and Border Protection Commissioner Kevin McAleenan said that while the border agents involved “empathize with the father over the loss of his daughter,” people who choose to migrate open themselves to the possibility of such tragedies.

“We cannot stress enough the dangers posed by traveling long distances, in crowded transportation, or in the natural elements through remote desert areas without food, water and other supplies,” he said. “No one should risk injury, or even death, by crossing our border unlawfully.”

Finally, in a Facebook post, the Department of Homeland Security warned that “drug cartels, human smugglers and the elements pose deadly risks to anyone who attempts to cross the border illegally.”

There are several issues with these statements, say immigration advocates and experts. US officials have insisted that asylum-seekers only enter the US through official ports of entry, but have made it nearly impossible to do so. The Trump administration’s policy of  “metering” — or limiting — the number of people allowed to enter at official entry points across the southern border has pushed asylum-seekers to take ever greater risks in search of safety.

The girl’s death, experts say, is the result of these policies.

“They’ve taken an overall approach to migration that focuses on punishment and deterrence, rather than focusing on screening asylum-seekers who are fleeing to the US and ensuring they have a chance to fairly seek protection and addressing the root causes of migration,” she says.

The “metering” policy has been around for two years but has been institutionalized in the past six months, according to a new report by the Robert Strauss Center for International Security and Law at the University of Texas at Austin.

Only a few dozen may enter daily and agents cite a lack of processing capacity, according to the report. This has “left lines of asylum-seekers waiting in almost every major Mexican border city,” it states. Meanwhile, those waiting in Mexico become vulnerable to dangers such as kidnapping, sex-trafficking and other forms of exploitation.

A separate report earlier this year by the Department of Homeland Security’s internal watchdog, the Office of the Inspector General, found that the metering policy likely pushes people to cross the border illegally.

Related: How does asylum work at the border?

It’s unclear whether Jakelin and her father, 29-year-old Nery Gilberto Caal Cuz, first attempted to enter the US at an official crossing. According to CBP, they were apprehended in the desert on Dec. 6 with a group of 163 migrants near Antelope Wells, New Mexico, by four Border Patrol agents. The father signed a form saying his daughter was in good health and agents did not observe any issues.

Eight hours later, while aboard a Border Patrol transit bus, the father alerted agents that his daughter was vomiting. It took 90 minutes for the girl to receive medical care, according to news reports. Jakelin Caal Maquin died just after midnight on Dec. 8.

Customs and Border Patrol initially said the girl died of dehydration and exhaustion after not having anything to eat or drink for several days. But her father has since said that’s not true, and that the girl was in good health and sufficiently hydrated throughout the trip and when they arrived. The latest reason given for her death is septic shock and cardiac arrest.

The Office of the Inspector General has said it will investigate her death.

In 2017, migrant deaths increased even as the number of border crossings decreased: 412 died last year compared with 398 the year before, according to the International Organization for Migration.

Communication may have also been a major barrier in Jakelin’s case. Her father signed the form in English and Border Patrol agents read it to him in Spanish, his second language. His mother tongue is Q’eqchi’, a Mayan language spoken by more than 700,000 people in Guatemala. All Border Patrol agents are required to speak Spanish and receive formal training in Spanish. But that’s often not much help to the rising portion of migrants at the southern border who speak Indigenous languages, leading to a recent spike in demand for Indigenous-language interpreters, according to immigration lawyers.

Doris Meissner, a senior fellow at the Washington, DC-based Migration Policy Institute, said US officials ought to take responsibility for the harsh environment they are creating for migrants.

“I do believe that the statements the Department of Homeland Security is making in response to this incident — and more broadly with its asylum policies and enforcement reactions — are very much contributing to these circumstances,” says Meissner, who once headed the Immigration and Naturalization Service, the predecessor of US Citizenship and Immigration Services.

“The government is saying, ‘You should cross legally.’ That’s what’s been said in response to this particular death,” she says. “But they have made no provisions at the ports of entry to be able to handle anything close to the numbers of people who are seeking entry. So the longer that’s the case … this is all contributing to circumstances that encourage crossing in the more dangerous places.”

Under US and international law, anyone who enters into US territory has the right to seek asylum — even if they illegally crossed a border first.

The harsher border policies come as the US has seen an uptick in people seeking international legal protection. A decade ago, a ratio of about 1 in every 100 border crossers sought asylum or humanitarian relief, according to the Migration Policy Institute. Today it’s a ratio of 1 in 3. That change has been driven by violence in Central America’s Northern Triangle of El Salvador, Honduras and Guatemala.

Far more people are crossing as family units with small children in tow — a departure from a few years ago when it was more common for young men to cross alone. More than 25,000 families were apprehended last month, in addition to more than 5,000 children who arrived alone, according to CBP.

McAleenan testified before Congress last week that border stations are not equipped to handle families or children.

“It’s not surprising to me that these conditions would result in tragic outcomes,” says Long, the Human Rights Watch researcher.