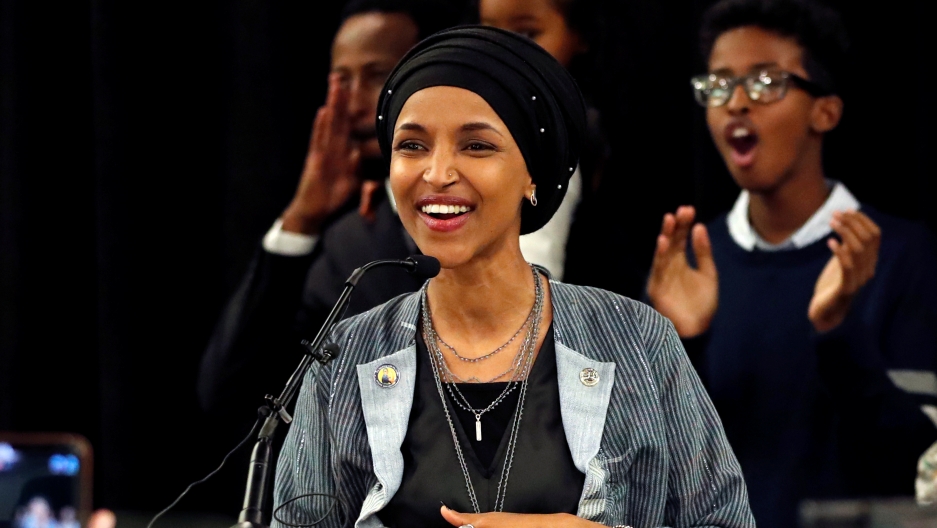 About halfway through the 2018 midterm elections, Democrats were poised to retake the House of Representatives, but to lose seats in the Senate, bolstering the Republican majority.

Over the course of the election, we’ve profiled various races with big implications on the global stage, exploring how tariffs might affect a Senate campaign in Tennessee and whether a candidate in Minnesota could become the first Somali American woman elected to Congress.

While results are still coming in, here are some races that have been called, and some we’re still watching.

Ilhan Omar defeated Republican Jennifer Zielinski in a district that is deeply Democratic and includes the city of Minneapolis.

Omar becomes the first Somali American woman elected to Congress, and one of the first Muslim women elected as well.

Omar fled her native Somalia when she was 8 years old and spent four years in a refugee camp in Kenya. She came to the US as a 12-year-old and eventually settled in the Cedar-Riverside neighborhood of Minneapolis, which has long been a first stop for new arrivals in the US. There, she “fell in love with democracy” and started spending time as a community organizer until she ran for office.

As Taylor Gee of Politico reported, Minnesota has larger gaps between white people and people of color than almost anywhere in income, unemployment, poverty and educational attainment.

Safiya Wazir, a 27-year-old mother of two whose family fled persecution from the Taliban in Afghanistan, beat out Republican Dennis Soucy to earn a seat in the New Hampshire House of Representatives.

Wazir has a dramatic story. She was 6 when violence divided her home, Afghanistan. Wazir remembers bombings and shooting when the Taliban arrived.

“I remember my dad being in a black car sitting in front and I was sitting in the back with my mom, putting my head down on her lap, that far I remember,” Wazir says. “And then after that, I have no idea.”

They landed in Concord in 2007; Wazir had to re-start high school and was older than everyone else in her grade. After school, she worked at Walmart and Goodwill. When Wazir was in community college, one subject kept coming up at home. It was time for her to get married.

But Wazir’s mother won that debate. So Wazir went to Afghanistan, married the man her parents chose for her and came back. Over the next few years, she became a US citizen, had two girls, and won awards for her work as a child advocate.

A friend suggested Wazir run for office, and she thought about issues she cared about, like education and senior care. Wazir decided to run and a group of young New Hampshire Democrats supported her run.

In Tennessee, what looked to be a tight race between Republican candidate Marsha Blackburn and former Democratic Gov. Phil Bredesen turned out to be an early call in favor of Blackburn.

Blackburn will succeed Republican Sen. Bob Corker, who is stepping down. Tennessee voters haven’t sent a Democrat to the Senate since they re-elected Al Gore in 1990. In 2016, Donald Trump carried the state by 26 percentage points.

A major issue in the election was trade, with Tennessee feeling a major impact from the Trump administration’s tariffs on China. Tennessee farms that export to China and businesses that rely on steel and aluminum imports are being squeezed.

“The tariffs we have right now are hurting Tennessee badly, they are a job-killing tax on Tennessee businesses,” Bredesen said in a debate.

Blackburn countered moments later: “I hope that we get these tariffs over and done with because they are not good for Tennessee.”

Leah Askarinam, with the Washington newsletter Inside Elections, has looked into the impact of tariffs on voters and said a lot of farmers and small businesses in rural red states are concerned, but are also heeding the president’s advice to remain “a little patient.”

In the wake of Hurricane Harvey’s devastating floods, climate change emerged as a key issue in the 7th Congressional District.

While Fletcher acknowledged climate change in the Democratic primary, she chose to take a lowkey approach to the issue in the general election, choosing to focus on flooding and federal aid, rather than the issue of climate change.