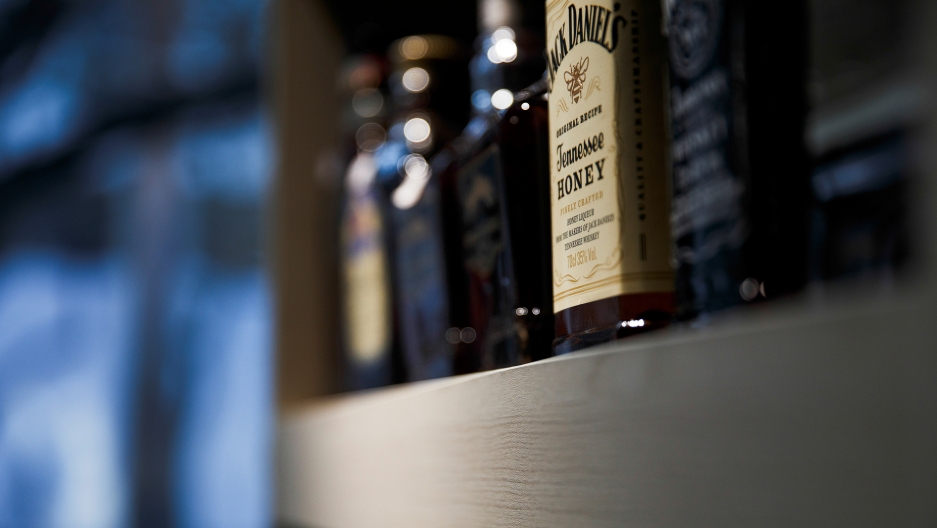 A bottle of Jack Daniel’s Tennessee whiskey in a store in Beijing. China imposed 25 percent tariffs on US whiskeys back in July in response to President Trump’s tariffs.

Tennessee voters haven’t sent a Democrat to the Senate since they re-elected Al Gore back in 1990. In 2016, Donald Trump carried the state by 26 percentage points. But this fall, the Tennessee Senate race is very tight.

Republican Senator Bob Corker is stepping down. The Democrat looking to grab his seat is a popular former governor, Phil Bredesen, who has said he doesn’t oppose President Trump outright, but will stand up to the president on policies that hurt Tennessee. Case in point: tariffs.

That has to be painful for whiskey distillers, but several companies, including a whiskey trade group, declined requests to speak about tariffs. Several small businesses in Tennessee that filed complaints with the US government about President Trump’s tariffs also politely declined interview requests.

“I actually encountered the same thing when I first started. I would call these companies up and got the same response,” said Steven Livingston, the associate director of the Business and Economic Research Center at Middle Tennessee State University. “As far as I can tell, it’s just they’re worried about the competition learning something about them.”

Or maybe tariffs just aren’t that important to Tennessee voters. For consumers, the impacts from tariffs haven’t really been felt yet. The latest round of tit-for-tat tariffs with China just took effect in late September.

“I just think it’s too early,” said Livingston. “A lot of smarter retailers bought like crazy in anticipation of it. So I think the average person hasn't felt much yet, because a lot of businesses haven’t had to raise prices yet. And so right now, I think it’s mostly a symbolic thing for a lot of voters.”

But not for everyone. Tennessee farms that export to China and businesses that rely on steel and aluminum imports are being squeezed. Leah Askarinam, with the Washington newsletter Inside Elections, has looked into the impact of tariffs on voters and said a lot of farmers and small businesses in rural red states are concerned. But they’re also heeding the president’s advice to remain “a little patient.”

“From what we’re hearing, there’s a trust that the negotiations from these tariffs will end up helping the people who supported Trump,” said Askarinam. “So I think that there’s a level of trust in the president from his supporters, from his base, that’s kind of helping them get over some of their skepticism about these tariffs.”

And Askarinam said that tariffs are just one of many issues voters are considering, and frankly, not the biggest one. She said Democrats across the country are running on protecting healthcare.

On the other side of the aisle, “Republicans think it’s the idea that Nancy Pelosi and Chuck Schumer could be leaders,” said Askarinam. “Republicans keep pushing that voters could end up electing a liberal agenda.”

At a recent Senate debate in Tennessee, that’s pretty much what Republican candidate Marsha Blackburn said over and over about Bredesen.

“Chuck Schumer has bought and paid for his campaign,” Blackburn said at seemingly every opportunity.

Blackburn is a current congresswoman from Tennessee and a familiar face on Fox News. The two candidates — Blackburn and Bredesen — sparred on pretty much everything during the debate ... except this point.

“The tariffs we have right now are hurting Tennessee badly, they are a job-killing tax on Tennessee businesses,” said Bredesen.

Blackburn countered moments later: “I hope that we get these tariffs over and done with because they are not good for Tennessee.”

(Watch from 46:13 to see the two candidates talking about tariffs.)

So, if you were a soybean or hog farmer watching the debate: “There’s not going to be a big difference on what farmers think in terms of both of their responses on that. It’s the same,” said Lee Maddox with the Tennessee Farm Bureau Federation.

Maddox said, make no mistake, restoring open trade is vital for Tennessee farmers. But he doesn’t see things changing if the state sends a Democrat or a Republican to the Senate.

“I think the message — especially on trade — to the administration, on both sides of the aisle is: Let’s get something done,” said Maddox.

Still, even if one senator from Tennessee can’t end the trade war, a vote for a Democrat in deep red Tennessee would be a strong, symbolic rejection of President Trump’s overall agenda. Speaking in Tennessee recently, President Trump said, “A vote for Marsha [Blackburn] is really a vote for me, and everything we stand for.”