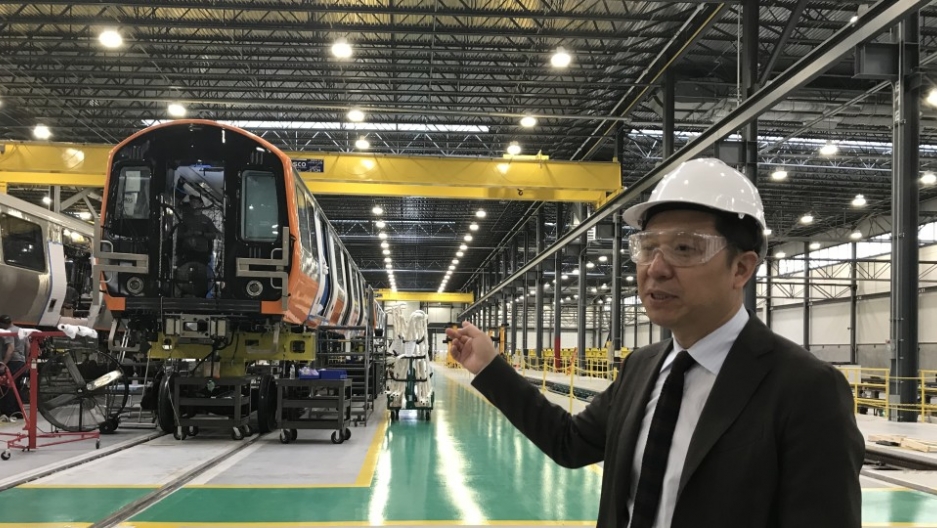 When you pull up to the CRRC MA plant in Springfield, Massachusetts, the first thing you notice is the size: it’s a gargantuan gray edifice sprawled over 200,000 square feet in what was once a vacant lot.

Step inside, and you see that just a fraction of the space is currently in use — though the activity there is intense. On a recent weekday, a group of CRRC MA workers were building six subway cars for Boston's transportation, fitting the interiors and underbellies with parts riders never see.

By 2020, they’ll be sending eight new cars per month, eventually delivering more than 400. That’s good news for subway riders used to shabby digs — and even better news for workers like Eric Anderson.

“I was a cook,” Anderson said of his prior career. “[I’d] been a cook about seven years.”

Then CRRC, a massive, state-owned Chinese company, opened its first North American operation on Springfield’s East Side. Anderson got an assembly job — and a significant pay hike.

“It probably doubled, with the benefits, from what I was making,” Anderson said of his compensation.

Also reaping the benefits of CRRC’s move to Springfield: Ian Bessette, who moved from Burlington, Vermont, for his job as a lead mechanical assembler.

Related: How is 'new NAFTA' different? A trade expert explains

“If I’m perfectly honest, it blows anything out of the water that’s up there currently, that I’m aware of,” Bessette said, adding that he’s making 50 percent more than he did working at a duct factory in Colchester, Vermont.

The coming years should bring more solid, blue-collar jobs like theirs to Springfield, as CRRC MA builds subway cars not just for Boston, but also for Philadelphia and LA. But now there’s a hitch: significant uncertainty linked to President Trump’s escalating trade war with China.

“So far, the new tariffs, and the new policies have left an impact on our manufacturing,” said CRRC MA Vice President Jia Bo, who spoke with WGBH News through an interpreter.

Jia said since some of the parts used to build these trains are imported from China, the Trump administration’s new 25 percent tariffs have already added millions in new costs — which could be passed on to Boston's subway, if CRRC MA decides to revisit the terms of its contract.

There’s also bipartisan interest in Washington in banning CRRC from bidding on federal projects for one year — and even talk of labeling the company a national security threat. CRRC’s critics accuse it of systematically underbidding to gain market dominance, and warn that technology on its vehicles could conceivably be used for surveillance.

Jia, however, insists that the company is a force for good in the US.

“This is what we want the government, and also the policy centers to see, that CRRC is definitely here in the US to stay,” Jia said. “We have a long-growing plan, and we’re definitely bringing benefits for the taxpayers here.”

But in the future, Jia warns, the climate of uncertainty could reverse those gains.

“From 2021, job creation will slip from there, if there’s no additional orders coming on board from the new tariffs and new restrictions on the company,” he said. “So that would leave a really bad impact.”

“In this day and age in Springfield, we need manufacturing,” Scavotto said. “We haven’t had manufacturing here in years. … With us and the [International Brotherhood of Electrical Workers] over there, there’s over 120 union workers from Springfield.”

“You’re going to possibly put them out of work,” he said. “If they can’t get contracts, they can’t maintain this building.

“I do believe [Trump] wants to put people to work," he added. “But I don’t think he realizes the impact of what he’s doing over here.”

Then again, Jia said the company now plans to circumvent Trump’s tariffs by shifting the manufacture of some parts from China to the United States. That could mean more jobs, not less, even if they’re not based in Springfield — and could convince the president’s supporters that he knows exactly what he’s doing when it comes to China and trade.

A version of this piece originally appeared on WGBH.