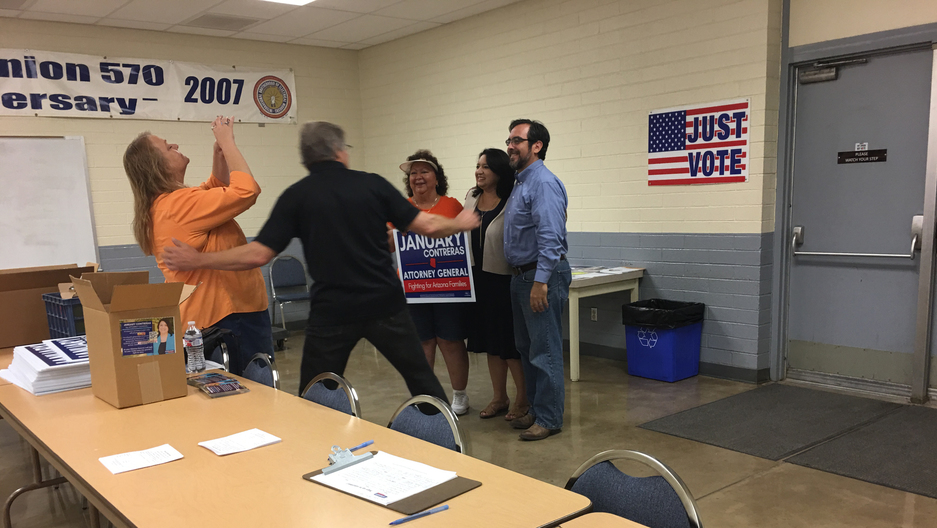 January Contreras takes pictures with supporters after an event in a union hall in Tucson, Arizona, on Sept. 23, 2018. She is a Democrat running to be the state’s attorney general.

January Contreras never thought about running for office. Even though, she says, everyone who worked for Arizona’s last Democratic governor was encouraged to become a candidate.

“I just think there are many, many ways to serve and it doesn’t have to be as a candidate,” she says. Contreras served as an advisor to Janet Napolitano, who was governor from 2003 to 2009. Now she is campaigning to become Arizona attorney general in the Nov. 6 general election.

Contreras, watching President Donald Trump in office and Republicans in control of Congress, says she felt powerless. So she helped extend the unprecedented wave of diverse, female candidates running for office this election cycle into a very Republican place: Arizona. It’s a state both parties are watching closely this election cycle to see if enough Latinos will vote to put Democrats in power — especially after record-breaking voter turnout in the primaries last month.

“We were at a dinner table and Dad said, ‘We talked it over and your mom’s going to run to be the attorney general of Arizona,’” says Contreras’ son Noah, a high school freshman.

Contreras is a lawyer who, after serving in the Napolitano administration, went on to work for Homeland Security under President Barack Obama, then helped found a nonprofit organization that provides free legal services to women and children. She thought that made her best qualified to run for attorney general.

But Noah’s first response was, “Why aren’t you running for governor?”

And the first question from her other son, Lucas, a high school junior, was, “What are the commercials going to say about you?”

Lucas was worried that political attack ads would target Contreras for being Latino; her family has lived in Arizona for four generations and she’s pro-immigrant rights. Contreras didn’t know what to say. She told Lucas they had to be prepared as a family for anything. It was a powerful moment for her — one son asking about the risks people face when running for office and the other asking why she wasn’t taking a bigger risk for a more prominent position. 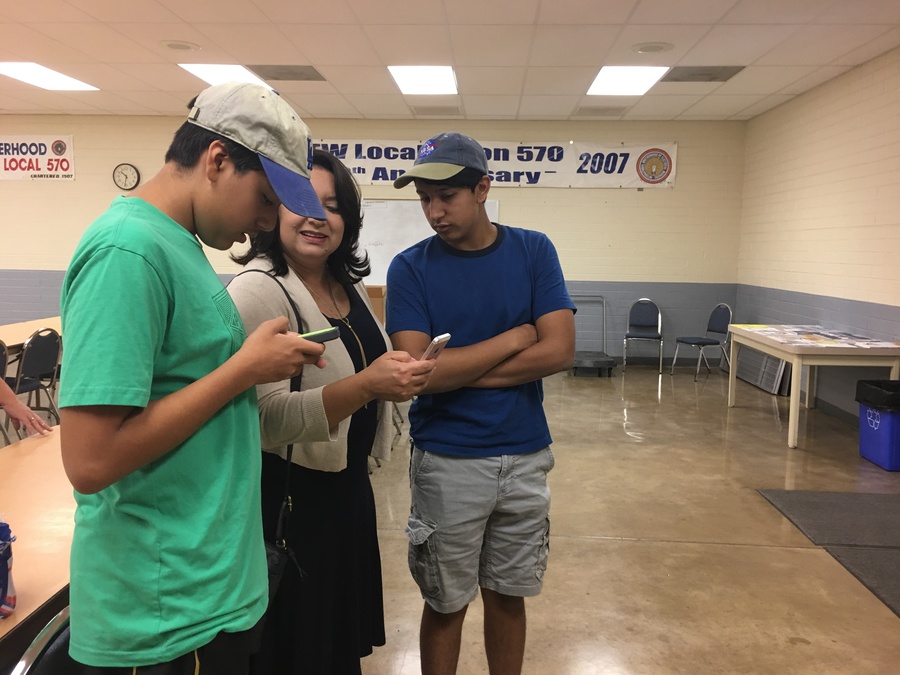 Arizona attorney general candidate January Contreras is running as a Democrat in a largely Republican state. Her sons, Noah and Lucas, are arranging her transportation between events in Tuscon on Sept. 23, 2018.

But Arizona’s next attorney general might help decide things like whether or not Arizona will participate in attempts to repeal the Affordable Care Act, also known as Obamacare. And the Republican incumbent, Mark Brnovich waged a long battle to keep DACA recipients — undocumented people who came to the US as children but were granted temporary reprieve from deportation — from being able to get driver’s licenses.

Arizona has some of the strongest pro-immigrant groups in the country and it’s a third Latino. Democrats hope with Contreras at the top of the ticket, alongside another Latino candidate, David Garcia for governor, more Latinos will vote.

Brnovich’s campaign and his office as the attorney general did not respond to requests for an interview.

“I’m a first-generation American. My family fled communism in Eastern Europe and this fundamental principle about the rule of law is that one person cannot unilaterally change the law,” he told Fox News in March. “The federal government should not be telling Arizona who they can or can’t issue driver’s licenses to.”

And that message has appealed to many voters. Contreras is facing an entrenched Republican establishment.

Querard acknowledges that Republicans are vulnerable, like any party in power going into elections. They’ve made a lot of promises they haven’t fulfilled.

“They have not yet built the wall, they have not yet gotten rid of Obamacare,” he says. “And so you have a certain amount of frustration within one party's base and a great deal of energy in the opposition party's base. And that's what can make these midterms a challenge.”

Trump is popular among GOP voters in Arizona, but his effusive confidence about the coming elections may not help, Querard says. Republicans might think their candidates are a shoo-in and they don’t need to show up to vote. Meanwhile, the state is facing a political sea change, going into its first cycle without Republican senators John McCain, who died in August, and Jeff Flake, who is openly critical of Trump and decided not to run again.

Still, Querard says the GOP is putting new resources in Arizona, drilling down on data to target voters. And on the plus side for Republicans: Arizona is a border state and there’s support for Trump’s proposals to expand the border wall. So Querard thinks Democrats are wrong if they believe increased Latino turnout definitely means Democrats win.

“This idea of the Latino vote being this monolithic vote that moves in a single direction really isn't true,” Querard says. “The highest-ranking Hispanics Latinos in Arizona over the last several years have all been Republican. So you don't necessarily see that Democrats are the exclusive beneficiary of Latinos getting out and voting.”

This is true even though Democrats are arguing theirs is the only party of compassion, while Republicans are racist, particularly because of Trump’s zero-tolerance policy which led to migrant families being separated at the southern border.

“It’s pretty easy to demonize Donald Trump as a president when it comes to some of the race issues. But economically speaking, Hispanics and African Americans are seeing some of the biggest improvements of anybody,” Querard says, citing low national unemployment numbers for those groups. “A lot of Hispanics in Arizona who are here legally tend to be some of the strongest advocates for border security so they don’t respond in that knee-jerk fashion, that if you’re for secure borders that means you don’t like brown people.” 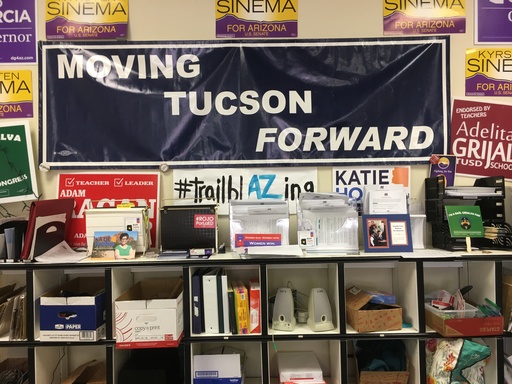 This year, for the first time, the Democratic Party in Arizona is expanding into diverse, lower-income areas, like this new office on Tucson’s south side.

Contreras says she hopes Latino voters see in her someone who is like them, someone they can trust. But she also says Latinos in Arizona don’t think of themselves as being part of the “Latino vote.”

“I think that we don't always see issues from that lens, but we certainly can see when others are trying to constantly make issues about ethnicity from the other side,” she says. “I think something that we will stand up for and reject, because I think it’s clear to a lot of people, including Latinos, that there are people in power now who want to treat us as second-class citizens.”

Some polls show the Arizona attorney general race at neck and neck. Other favor the Republican candidate Brnovich. Contreras says if she doesn’t win in November, she’ll keep serving the public as best she can even without the title of attorney general.

Next: Can environmental protection and border security coexist? Not through an impenetrable wall, say Arizona advocates