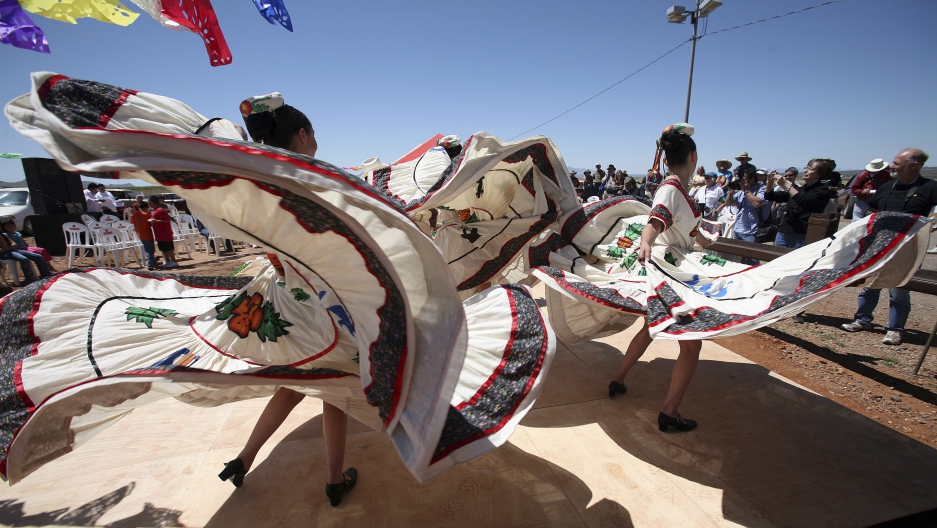 Members of a folklorico dance group from Agua Prieta, Sonora, Mexico, perform during a "Fiesta Bi-Nacional" that takes place between Naco, Arizona and Naco, Sonora, Mexico, in 2007. Residents from both sides of the border celebrated the fiesta with food, entertainment, dancing and volleyball with the net set up on the border barrier.

This election season, issues like US immigration and the United States border with Mexico have been pushed into international headlines. To a degree, it’s understandable — borders do define our sovereignty.

But with over a million Latinos potentially eligible to vote in Arizona alone, experts and community leaders say that words like “walls” and “secure borders” are standing in for what could be deeper conversations about the economy, drug enforcement and education. Several of them debated better ways to connect with Latino voters this past Tuesday, at a live forum in Phoenix hosted by PRI's The World and the BBC World Service.

Angela Kocherga directs the Borderlands project at Arizona State University’s Cronkite School of Journalism, and recently conducted a poll on what Latino voters care about. Among its findings, she says, is that residents near the border think a wall is a simple solution to a complex problem.

“These candidates aren't addressing issues that are fueling demand for labor — immigrants are coming because people are hiring them — and of course, demand for drugs, which is fueling huge, huge criminal organizations,” Kocherga says.

Ben Monterroso, executive director of the civic engagement organization Mi Familia Vota, agrees, although he notes that with the heated border rhetoric, organizations like his haven’t had to pressure candidates into talking about immigration. “Immigration is not the only issue that moves us,” he says. “I want to see healthcare access for my family, I want to see education access and education for my kids, I want to see good jobs. ... If you’re going to ask my son or my daughter, what is the most important issue for them, it's the economy and education.”

As of February, 43 percent of Latinos in Arizona were registered Democrats, accounting for more than one of every four registered Democrats statewide [PDF]. But even liberal community organizers worry that those who vote won’t necessarily be casting ballots for the issues important to them.

“A lot of people are much more activated this year to vote against Donald Trump, versus voting for a candidate that they felt spoke to their issues,” says Antonio Valdovinos, a founder of La Machine Field Operations, which works to elect progressive candidates.

Some Republican activists in Arizona say that because Latinos have such a strong Democratic turnout, there’s less focus, from either party, on debating the issues that matter to those voters. Sergio Arellano directs the Republican National Party’s strategic initiatives in Arizona, and notes that his visits with voters can at times yield surprise, and then frustration.

“They say, 'You are the first Republican I've ever seen in my life, and you're coming out here and knocking on my door. Why is that? How come I've never seen a Democrat come knock on my door?'” Arellano says.

“The Democrats take that vote for granted and don’t go out [to see] the impoverished communities falling apart with lack of roads, lack of infrastructure, lack of employment. And the Republicans, because they’ve bought into that narrative, they don’t show up.”

November’s election is set to be a wake-up call for both major parties. Arizona, long a red state, just might swing for Clinton. But in Phoenix, Alice Lara is waiting for change of another sort — she’s casting her vote for Trump. Lara, a co-host of Chips-n-Salsa on KFNX, a conservative talk show for Latinos, says although Trump wasn’t her first choice, she finds his status as a political outsider refreshing.

“It’s attractive to a lot of people, and a little bit to me, too, because of the fact that we are tired of politicians,” she says. “All of you there — Democrats and Republicans, what are you saying? They’re not getting things done.”

The audience murmurs after a few moments — and gives a small spit of applause.

Community organizers on both sides of the fence are burning shoe rubber looking for undecided — and unregistered — voters. But they agree that the work will continue after Nov. 8. Angela Kocherga hopes that their hard work will pay off.

“Whatever the party affiliation, I think all of us can agree here on this stage that … if Latinos turn out in huge numbers as everyone's working to ensure this happens, [and] once and for all flex their political muscle at the ballot box, these candidates will no longer be able to ignore this community,” Kocherga says. “And then those voters, in turn, will have to hold those candidates, including the president-elect, accountable.”

This article is based on the live Global Nation panel discussion, co-produced by PRI and the BBC World Service, which was held in Phoenix on October 4.