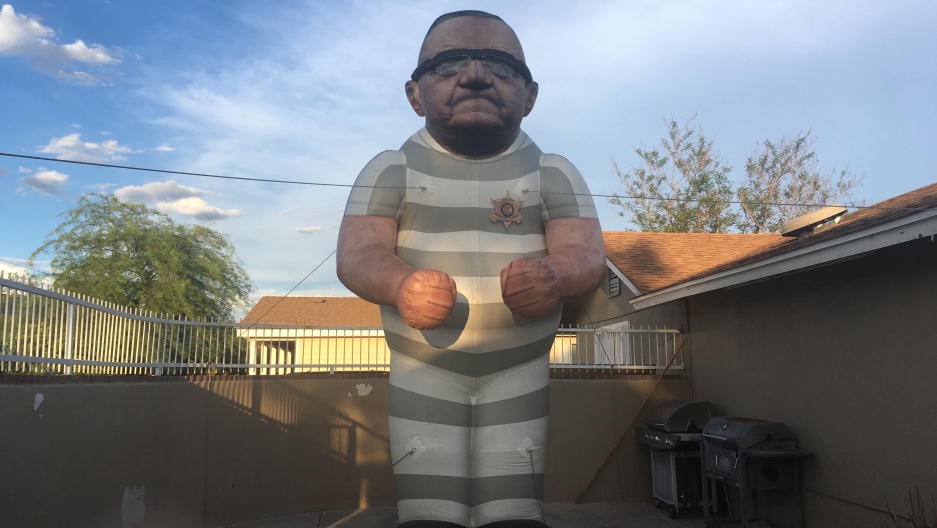 News that former Maricopa County Sheriff Joe Arpaio was found guilty of criminal contempt of court spread quickly through Phoenix’s immigrant community on Monday. That evening, a dozen women — most of them of Mexican descent — stood in front of a giant balloon effigy of Arpaio wearing a striped prison uniform, and cheered.

“Ya cayó, ya cayó, Arpaio ya cayó,” they chanted in Spanish, which roughly translates to “Arpaio has fallen.”

Now, on the heels of the criminal conviction of the man once known as "America’s toughest sheriff," immigrant activists say they will push to undo Arpaio’s legacy of local immigration enforcement.

Arpaio, a Republican, was defeated in 2016 after 24 years in office by a Democrat. His legacy stems from the role he trailblazed for local police to enforce immigration laws.

In 2007, he signed a partnership with Immigration and Customs Enforcement to participate in a relatively new federal program known as Section 287(g). ICE trained 160 of Arpaio’s patrol deputies and detention officers to have immigration enforcement powers. Arpaio’s deputies routinely swarmed neighborhoods, pulling over any cars violating traffic laws. If they encountered unauthorized immigrants, they would detain and turn them over to federal agents for deportation.

Latino drivers and passengers sued Arpaio in a federal racial profiling case that began in 2007. With allegations of unconstitutional policing swirling around Arpaio, the Obama administration revoked Arpaio’s 287(g) program for his patrol deputies in 2009, and eventually dialed the program back nationally.

A federal judge ruled in 2011 that without the 287(g) federal partnership, Arpaio’s deputies on the street no longer had the authority to arrest immigrants simply for being in the country without legal status, and must stop arresting immigrants who had not committed any crimes. Yet despite the order, for 17 months after the judge ruled, Arpaio’s deputies continued detaining immigrants and turning them over for deportation, even when there were no criminal charges.

On Monday, a different federal judge found Arpaio guilty of intentionally violating that 2011 court order, convicting him of criminal contempt of court.

Arpaio’s lawyers insist their client’s violations were unintentional. They vowed to appeal the case in hopes of getting a new trial before a jury.

Arpaio will face a maximum penalty of six months in federal prison when he is sentenced in October.

Arpaio’s controversial crackdown on illegal immigration earned him widespread support and made him a beloved figure in conservative circles in Arizona and around the country. Now, many of Arpaio’s supporters question how the former sheriff could be in trouble for enforcing federal immigration laws, particularly when they believe the federal government inappropriately abdicated its responsibility to enforce on illegal immigration during former President Barack Obama’s tenure.

Meanwhile, jokes abound in Phoenix’s immigrant community surrounding the convicted former sheriff’s possible incarceration. Arpaio, many immigrants here say, should be forced to eat the same slop he served in his jails and wear the same pink boxer shorts he famously forced on jail inmates. Noemi Romero, 25, who was born in Mexico, was arrested by Arpaio’s deputies in 2013 for working without papers. It’s time for her former jailer, she said, “to get a taste of his own medicine.”

But many immigrant advocates in Arizona say justice is not just about Arpaio being personally punished. It’s about dismantling the local-federal partnerships that, in Arpaio’s case, led to constitutional abuses and wrongful immigration arrests.

“For us, it is not just about him serving time, which we hope he does,” said Maria Castro, an organizer with the Phoenix-based immigrant rights group Puente Arizona. “It has never been just about arresting Arpaio, it has been about liberating our communities.”

But President Donald Trump has the opposite goal nationally.

While the Obama administration ultimately rolled back the 287(g) partnerships on immigration enforcement that ramped up Arpaio’s crackdowns, the Trump administration has promised to revive and expand the program. Trump is also seeking ways to withhold federal funds to punish local jurisdictions dubbed “sanctuary cities,” which refuse to cooperate with the federal government on immigration enforcement.

Jude Joffe-Block is a Phoenix-based reporter and fellow with New America. Terry Greene Sterling is a writer-in-residence and affiliated faculty at the Walter Cronkite School of Journalism at Arizona State University. They are co-authoring a book about the men and women on both sides of Arizona’s civil rights battle over immigration enforcement.