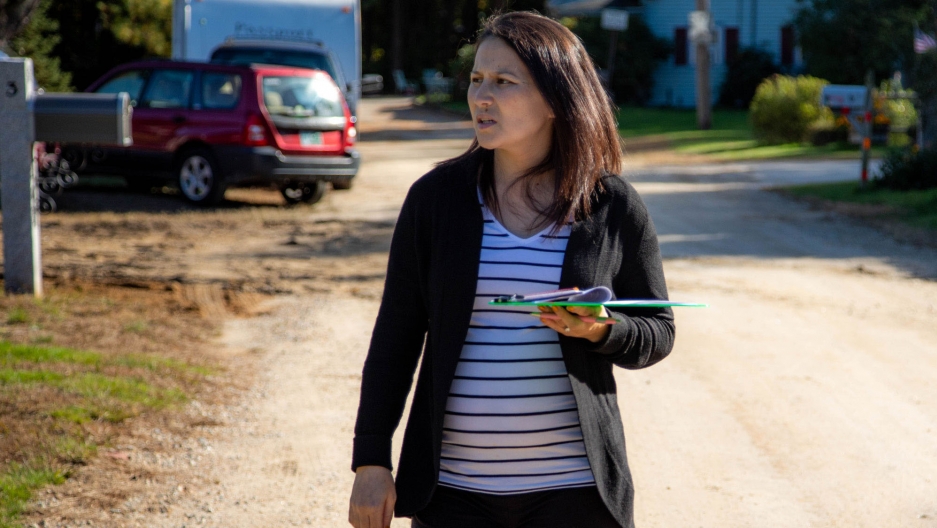 Safiya Wazir, 27, walks the streets of Concord, New Hampshire, where she is campaigning as a Democrat in a race for the New Hampshire House of Representatives.

Next month, Safiya Wazir hopes to give birth — and take office.

At seven months pregnant and 27-years-old, Wazir is running for office for the first time, and has already upset local politics in Concord, New Hampshire. Reporters across the world have come to meet her after she defeated the four-term incumbent Dick Patten in the Democratic primary for a seat in the New Hampshire House of Representatives. Patten, 66, told the Concord Monitor that “a lot has been promised to minorities,” and, “a lot of out-of-Concord people are getting everything.”

Patten declined an interview. Wazir says she doesn’t understand what the big deal is.

“That's actually one of the interesting things that I wanna know,” she says. “Like, why is it so unique, my race, that you guys are all about me now?” 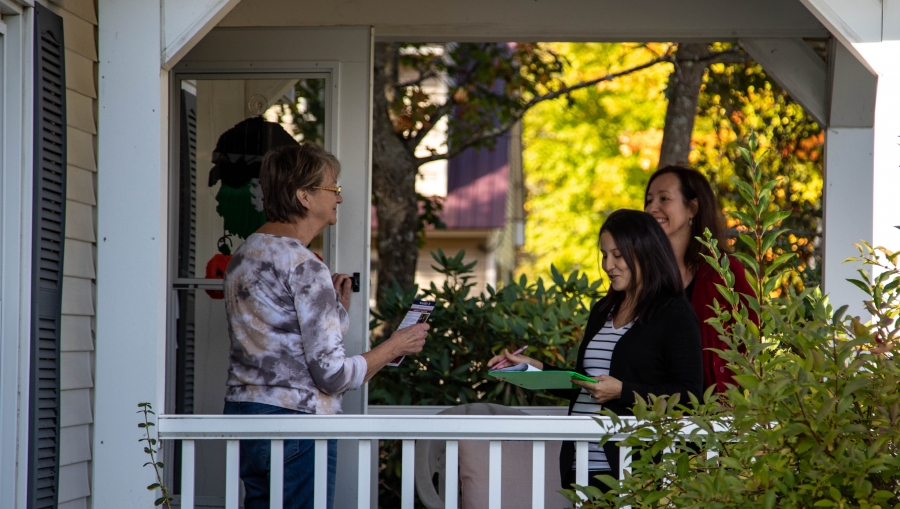 Safiya Wazir speaks with a resident of Concord, New Hampshire, during her campaign in a race for the New Hampshire House of Representatives.

It’s probably because Wazir has a dramatic story. She was 6 when violence divided her home, Afghanistan. Wazir remembers bombings and shooting when the Taliban arrived. Her dad was able to get the family out of the country.

Related: This Latino, Arab American was a long-shot candidate — until his opponent was indicted for corruption

“I remember my dad being in a black car sitting in front and I was sitting in the back with my mom, putting my head down on her lap, that far I remember,” Wazir says. “And then after that, I have no idea.”

They went to Uzbekistan. It was 1997. Wazir learned Russian.

“All I was focusing on was my education, even though people treated me like hell, you know, bullying and this stuff,” she says. “I said, ‘You know what, I'll just ignore it because it's OK. My country is in war. And I want to focus on my education. I want to be something in the future.’”

Wazir remembers being in a meeting with a refugee resettlement agency, where her dad asked to be sent somewhere peaceful. They landed in Concord in 2007; Wazir had to re-start high school and was older than everyone else in her grade. After school, she worked at Walmart and Goodwill. After graduation, when Wazir was in community college, one subject kept coming up at home. It was time for her to get married.

But Wazir’s mother won that debate. So Wazir went to Afghanistan, married the man her parents chose for her and came back. Over the next few years, she became a US citizen, had two girls, and won awards for her work as a child advocate.

A friend suggested Wazir run for office, and she thought about issues she cared about, like education and senior care. Wazir is also interested in paid family leave, after an experience a few years ago when she was hospitalized and her husband couldn’t get time off. 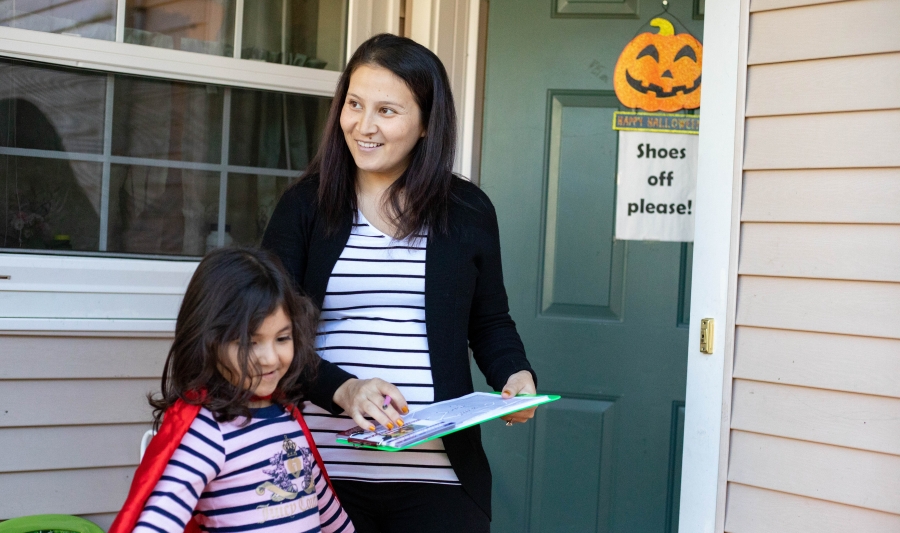 Safiya Wazir heads out to campaign for the New Hampshire House of Representatives.

Wazir decided to run and got her husband and mother to sign off on it since they’d be doing much more childcare if she wins. A group of young New Hampshire Democrats supported her run, even though it’s rare to see challengers in Democratic primaries in New Hampshire.

“She kept reminding me that she’s serious and then I said to myself, ‘I don’t think they’re really going to let her run,’ and ‘I don’t think she’s going to be able to win,’” remembers Ayi D'Almeida, Wazir’s friend and next door neighbor. “Knowing that this is predominantly a white city and I’ve never seen any refugee or immigrant running for any office.”

D’Almedia came to Concord as an immigrant from West Africa. He went to high school with Wazir and shared some of the same classes.

“It was very hard,” he says. “I’ve been here 10 years but it doesn’t feel like I’m supposed to be here, or this is really not my place. It just doesn’t feel welcoming.”

Related: How to deal when politics divide your family

In 2011, there was a rash of racist graffiti on homes of African refugees — cruel statements written in black marker calling them “subhuman,” “mud people,” and “third-world scum.”

A man was convicted on the graffiti charges four years later but in the immediate aftermath of the incidents, a local movement sprung up in response called the “Love Your Neighbor” campaign. People hung yellow ribbons and held small rallies to show support for newer arrivals.

“I remember going to one of the rallies with my dad, just holding hands and standing in solidarity with our neighbors,” says Brinkley Brown, a Harvard freshman who grew up in Concord and did a study of the city for class. Her research examined the nature of inclusivity in Concord.

“Generations have lived in Concord and are kind of stuck in their ways and sometimes it takes an event like the Love Your Neighbor campaign to kind of push people to stand up and speak out,” Brown says.

She says Concord invested in English language learning programs, cultural grants to art groups and a driving course for refugees and immigrants.

D’Almeida agrees with Brown — Concord’s atmosphere has gotten better. Wazir and D’Almeida’s tight-knit neighborhood has become a haven for refugees and immigrants.

“There’ve been many times where I really wanted to leave, move somewhere that could be a little more welcoming,” D’Almeida says. “[But] since I have my family here, I’d like to stay close and try to change the things that I could.”

“Her goal is to change that perception among the immigrant and refugees here that we cannot run for office,” D’Almeida says. “And she has the courage to do it.”

Wazir’s Republican opponent in the midterms, Dennis Soucy, didn’t respond to requests for comment. But Concord leans Democrat. And local Republican strategist Thomas Rath said in an email that voters, in general, are looking for a change. The New Hampshire state legislature is 70 percent male, 91 percent white, and the average legislator is in his 60s, according to the National Conference of State Legislators. 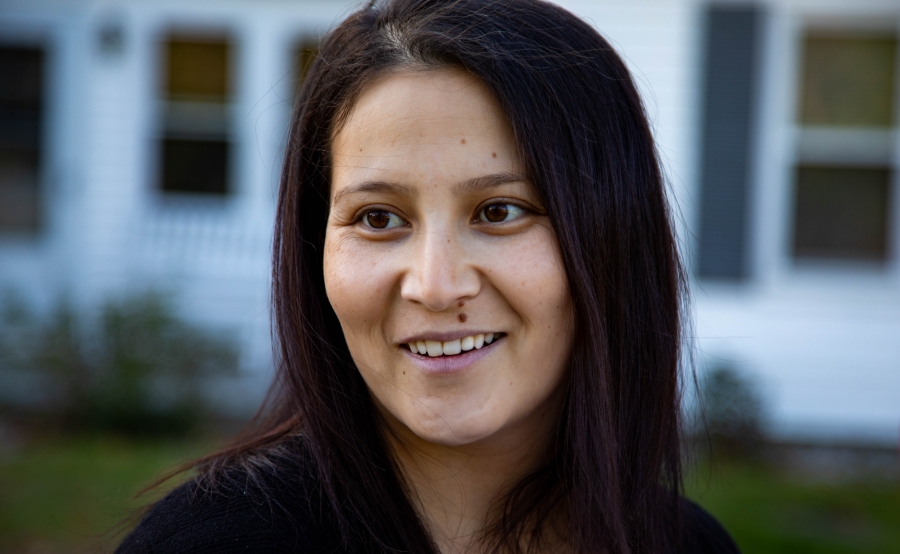 A former refugee from Afghanistan, Safiya Wazir is now running for office in the New Hampshire House of Representatives.

Voters seem almost grateful that someone would put in the effort to run for a part-time job that pays just $100 a year in New Hampshire.

“The other person who she was running against had been running for a lot, a lot of years. And it was stale,” says resident Pat McClintock, who voted for Wazir in the primary. “She was a fresh face, and she had a lot of good ideas, and that’s why I voted for her.”

McClintock says Wazir feels distinctly like a different kind of politician: One who has the courage to run, even though Wazir says she doesn’t see politics in her future long-term.