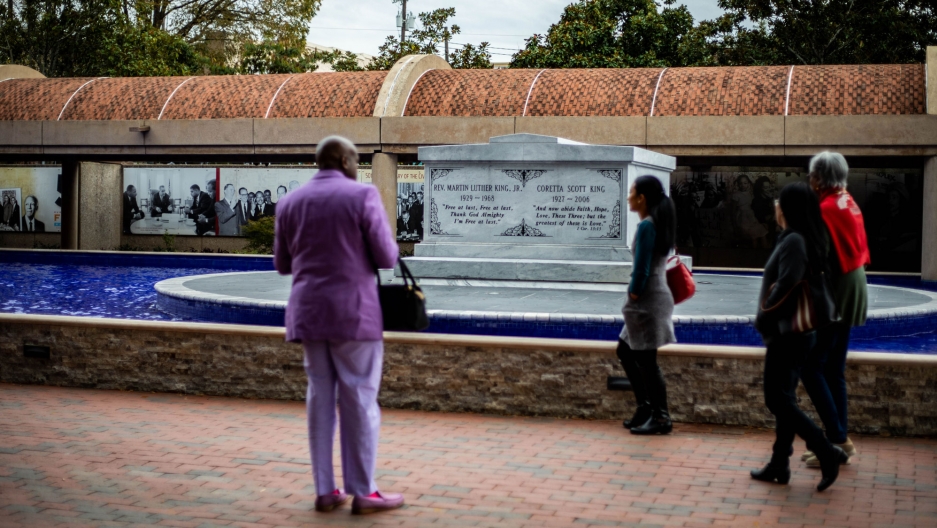 The current election in Georgia could bring the state to a crossroads. Here, people come to remember MLK at the Martin Luther King, Jr. National Historical Park.

Atlanta, Georgia, is the city where Martin Luther King Jr. was born; it was the backdrop for important moments in the American civil rights movement. But Georgia’s also home to Stone Mountain, the largest Confederate monument in the US. And, to add to the complexity, it now has one of the fastest growing immigrant populations in the country.

The current election could be a crossroads. Georgians could elect the first black female governor in American history. Democrat Stacey Abrams is a lawyer and novelist who was minority leader of the Georgia House of Representatives for many years. Celebrities have stumped for her; Oprah’s recent visit got a lot of attention.

Kemp is the current Georgia Secretary of State, and his office oversees elections, but he’s refused to step aside for this one.

“I got a big truck. Just in case I need to round up criminal illegals myself,” Kemp said in a commercial. “Yep, I just said that.”

But, Kemp does have some Latino support. Art Gallegos sits on the county GOP executive board in Gainesville, about an hour outside Atlanta. He’s a pastor who supports Trump, even though he disagrees with some of what the president says. 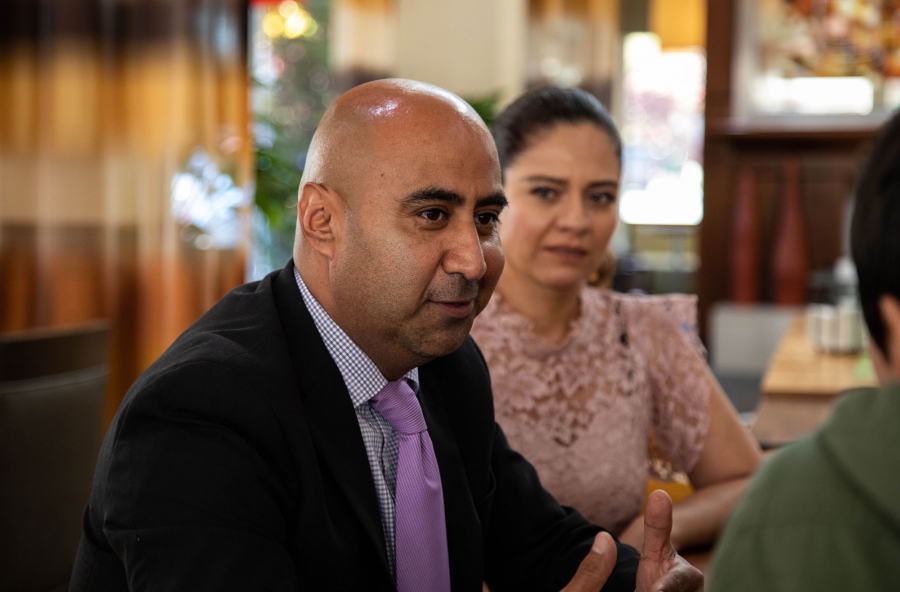 Art Gallegos sits on the county GOP executive board in Gainesville. Gallegos, who supports Republican Brian Kemp, runs the Latinos Conservative Organization in the area.

“After the end of the day we have to look and view the whole entire picture to say what is the best for our families, our community, our cities, our counties, our state and our nation,” he says.

And Gallegos thinks it would be best if undocumented immigrants waited in line the way his family did. Three of his brothers crossed the Rio Grande to enter the US, long ago.

“They got their life in order and they got their legal status in order,” Gallego says. “And now they're US citizens. So you can't tell me that it's not possible.”

Some 3,000 people did what Gallegos is saying, and recently became citizens. They registered to vote in Georgia. But a state database flagged them as non-citizens. A judge ruled they should still be able to cast ballots with proof of citizenship. Despite the ruling, local Democrats and civil rights activists still call it voter suppression. Gallegos says they’re intentionally stirring up trouble. 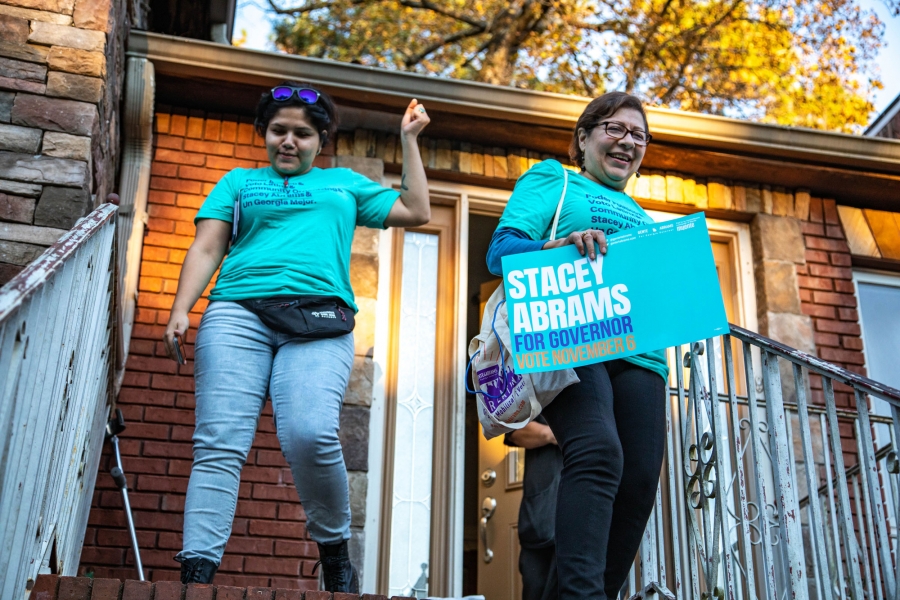 Gina Perez, of Gente4Abrams, has been going door to door in Gwinnett County, Georgia, in support of Democract Stacey Abrams.

Meanwhile, local Democrats have their own concerns about Republicans.

“We've had incidents where people are Republicans and they hold up our people, and our people, for some of them, it's hard to get out of the situation,” says Gina Perez of Gente4Abrams, a group reaching out to Latino voters.

At many homes, the canvassers are welcomed warmly. But some people have pushed back, Perez says, because they don’t want to vote for a black woman.

“I wanna say, anti-blackness is very real in our community and I don’t want to minimize that. But we thought there was going to be more pushback,” Perez says. “They know, like [Abrams] knows what it’s like to be a brown person in the South. I don’t think our community is oblivious to the history of the South.”

And the history of the South includes a long struggle by black Americans. Leo Smith, the former Georgia GOP minority engagement director, points out that African Americans fought for the 14th Amendment, giving immigrants today birthright citizenship for children born in the US. Smith left the state GOP in June; he says the party got new leadership with a new vision and that didn’t include him. 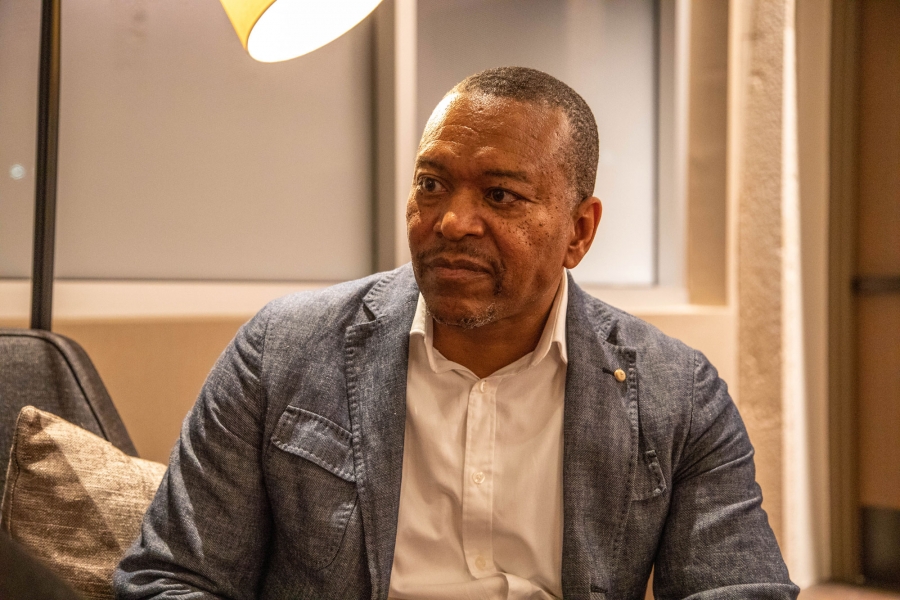 He says the state party no longer has a minority outreach director. But Smith says community members should be reaching out to voters, not political parties. He won’t reveal how he plans to vote, but Smith says this of Stacey Abrams:

“I don't think that some of her campaign rhetoric, if put into practice, would be good for black Americans,” he says. “I don't believe that a globalist agenda would benefit black Americans. And I think there are a lot of black Americans who agree and I think we will see that she will not get the black turnout that say Obama got.”

Smith defends Kemp, even though Kemp’s office shed thousands of black voters from the polls for mistakes in their registrations as small as misplaced hyphens. Smith argues things are still better than they used to be.

“The reality is, I can walk into any voting precinct that I have been assigned to with a latte in my hand and a newspaper on my arm and my children safely beside me without fear,” he says, adding that he has that freedom because of civil rights leaders who suffered greatly for it. “So it would be an insult to them to suggest that the voter suppression tactics used on Congressman John Lewis are the same that are being used against people now, today. They are not.” 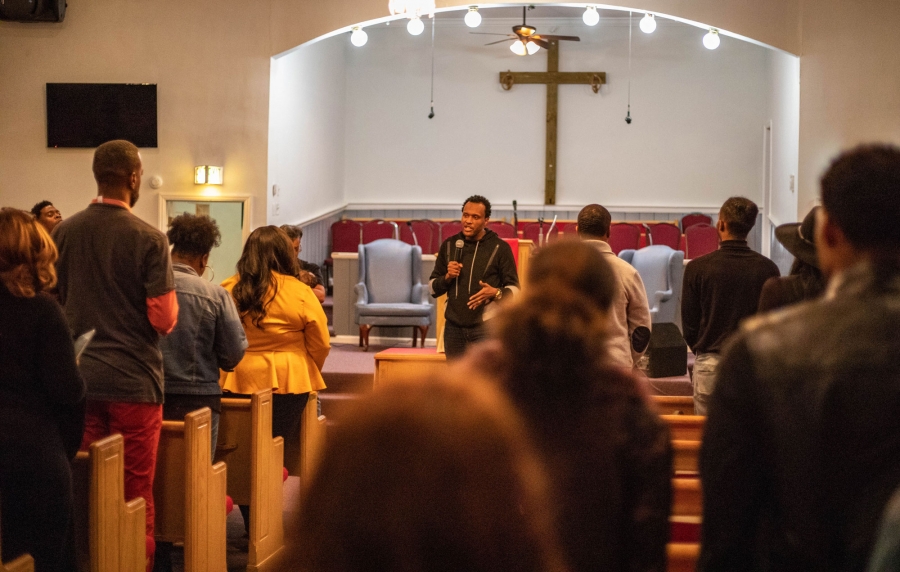 Rev. Antonio Grissom, of the Chapel Hill Baptist Church in Atlanta, leads a get-out-the-vote service at his church.

But at Atlanta's Chapel Hill Baptist Church, after a rally to get out the vote, Rev. Antonio Grissom sees history a different way.

“I think if you think of individuals like my late grandmother and others who were civil rights activists — especially in small Georgia towns, in rural Georgia, where racism was adamant — they really fought for us to have this right,” he says.

Grissom says his elders now feel like progress made during the civil rights era is being reversed. Activist Mary-Pat Hector is standing nearby and agrees.

“This is suppression. This is what it looks like,” says Hector, national youth director for the civil rights organization National Action Network. “This is trying to silence the voice of the soon-to-be majority in this country, which are people of color.”

She says if Abrams wins, it’ll show that diversity is important and government should reflect all people.

“A black woman as governor in a southern state? That speaks powers,” she says. “And I think that would also push back on a lot of the beliefs that the world has on America now due to the election of Donald Trump.”

But if Kemp wins, Hector says some people won’t be able to believe the election was fair.

“I don't think anyone in their right mind would trust the outcome,” she says.

And that’s the reaction Art Gallegos — the Gainesville Republican — expects.

“They are going to be sort of making a fit, just like a kid, like a child in the store that you tell them, ‘No, you can't have that candy.’ And yet they throw themselves on the ground and they start kicking and they do whatever to get attention instead of saying, ‘You know what? OK, let's start from page one. Let's work,’” Gallegos says.