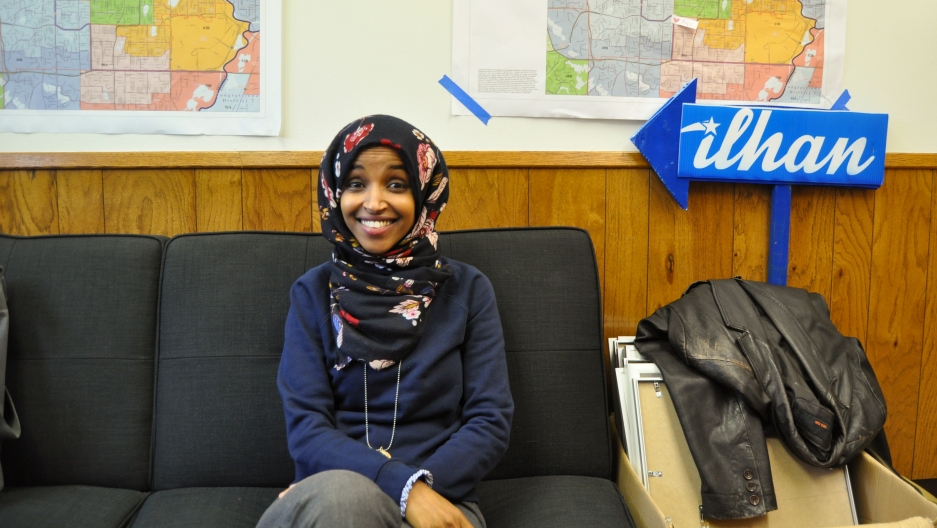 Ilhan Omar is a 36-year-old Democratic candidate to represent Minnesota's 5th District, in the US Senate. On Oct. 26, 2018 she was at her campaign headquarters in Minneapolis, Minnesota. But she keeps such a busy schedule that sometimes, it almost seems as if there are several of her roaming around the city securing votes and meeting constituents.

Ilhan Omar is hungry. It’s a Friday afternoon, she’s already given several interviews and a camera crew from Netflix is lurking around a low-slung, 1960s-vintage office building on East Lake Street in the south Minneapolis neighborhood of Longfellow.

It’s after 2 p.m. and Omar calls to one of her campaign staffers and asks for lunch with iced tea. It’s late in the campaign season and even though Omar has talked with thousands of voters, knocked on hundreds of doors and spoken countless times at events throughout the summer and fall, she says she is still excited to talk to a reporter.

Omar talks about her daughter first, whom she joined at an anti-violence rally at South High School earlier in the day. Omar has been busy. Last week she went door knocking at an apartment building in Saint Louis Park, a first-ring suburb of Minneapolis. Before that, she attended a rally, had a camera crew from CBS follow her around for an afternoon and then headed to a Q&A held after a screening of the film “Time for Ilhan.” Sometimes, it almost seems as if there are several of her roaming around the city securing votes and meeting constituents.

Omar fled her native Somalia when she was 8 years old and spent four years in a refugee camp in Kenya. She came to the US as a 12-year-old and eventually settled in the Cedar-Riverside neighborhood of Minneapolis, which has long been a first stop for new arrivals in the US. There, she “fell in love with democracy” and started spending time as a community organizer until she ran for office. 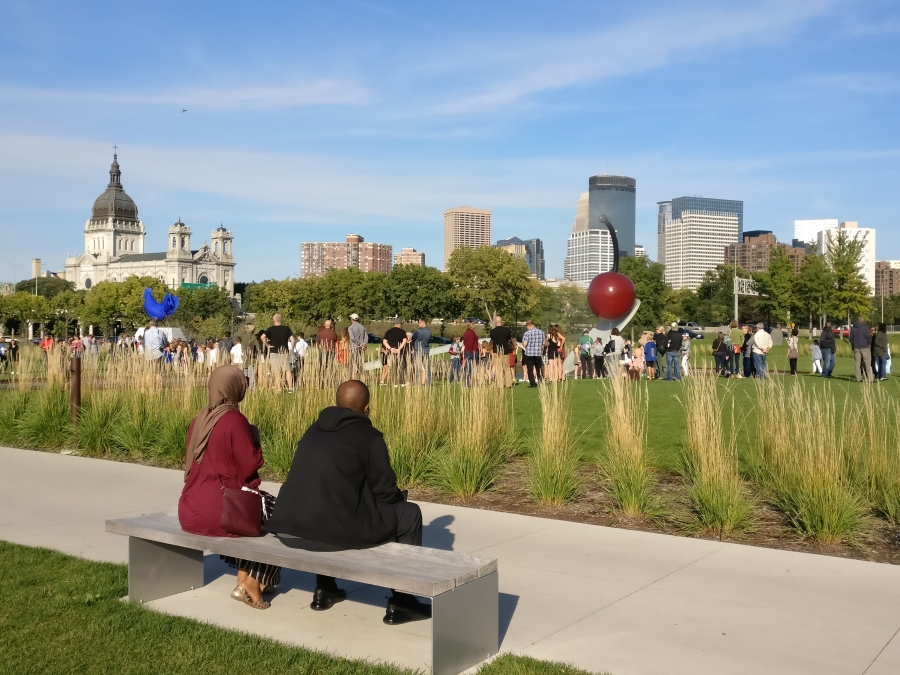 Minnesota's 5th Congressional District, which encompasses Minneapolis and some first-ring suburbs, is the most diverse in the state. Over 36 percent of its population is people of color and nearly 15 percent are foreign-born residents.

When three-term 5th District Congressman Keith Ellison announced he was giving up his seat to run for state attorney general, Omar took the chance and announced she was going to run for his seat. She almost certainly will win, as no Republican has held the 5th District seat since the 1960s. It’s a Democratic stronghold with many neighborhoods that have been home to immigrants, from Swedes in the late 1800s to recently arrived Latin Americans and East Africans. The district has close ties to the Civil Rights movement; Roy Wilkins was raised there and became one of the more prominent members of the National Association for the Advancement of Colored People in the 1950s.

Also: Immigrants have a long history of taking their issues to the people — as political candidates

And, while Minneapolis still retains a progressive spirit, it’s quickly becoming what Myron Orfield, a legal professor and sociologist at the University of Minnesota, calls “three cities” because of the racial and economic segregation. A 2016 voter breakdown conducted by a consortium of stakeholders in the state revealed there are nearly 115,000 people living at or below the federal poverty level in the 5th District. In fact, the Twin Cities of Minneapolis and St. Paul, which are the cultural and economic motor for Minnesota, have some of the starkest racial disparities in the US. As Taylor Gee of Politico reported, Minnesota has larger gaps between white people and people of color than almost anywhere in income, unemployment, poverty and educational attainment.

Omar’s platform is to address many of these issues; tackling income inequality, providing debt-free college and reforming the criminal justice system are central planks of her campaign platform.

“So, what I often say to people is that I didn't win because I'm Somali. I won because I'm progressive,” she says. “The people in my district, in my house district and now in the congressional district, they were looking for who was the most progressive, who could represent their interests the best way. In big numbers, they made the decision that it was this Somali refugee.”

Omar is right. She didn’t win her Minnesota house seat or the Democratic primary for the 5th congressional district solely on the backing of the Somalis in her district. In fact, when she ran for her 60B seat in 2016, many immigrants from Somalia were living outside of her district, in first-ring suburbs like Columbia Heights, Richfield and Crystal.

Degha Shabbeleh was among them — she moved from Somalia to Belgium and Canada before settling in the suburbs of Minneapolis — but that didn’t stop her from volunteering for Omar’s campaign campaign.

Shabbeleh teaches high school in Columbia Heights and worked on Omar’s Minnesota House campaign and her 5th Congressional District primary win. She remembers how nervous she was when she helped staff the phone bank. She couldn’t speak Somali all that well and wasn’t sure how white voters would react to a Somali woman running for office.

“I thought they were going to say they were voting for Phyllis Khan. But then they said, ‘Oh yes, we saw her and we’re going to vote for her,’” says Shabbeleh.

“Everybody likes what she stands for,” says Ali Isse, one of Omar’s longtime campaign staff. “And that's why she got all the support.”

In reality, not everyone supports Omar. Ward 6 city council member Abdi Warsame, who also immigrated from Somalia via London, backed Kahn during the 60B primary, for example.

But Filmmaker Norah Shapiro agrees that her campaigns resonate. Shapiro met Omar when she was just about to launch her campaign for seat 60B. Omar and her campaign staff agreed to let Shapiro follow them around on the campaign trail. The result was a documentary called “Time for Ilhan,” which featured many of the ups and down in Omar’s campaign. Omar didn’t actually win the primary but still went on the ballot without the endorsement of the state’s Democratic–Farmer–Labor Party.

“You can’t win that district without the support of everyone, not just Somalis,” says Shapiro. Students’ votes were also key and were ignored by Omar’s predecessor, she says.

“If you start with her activation of the student vote alone,” says Shapiro, “that had nothing to do with the Somali community. That had to do with these abysmal numbers of participation by the 18-year-olds and the college students inside that district.” 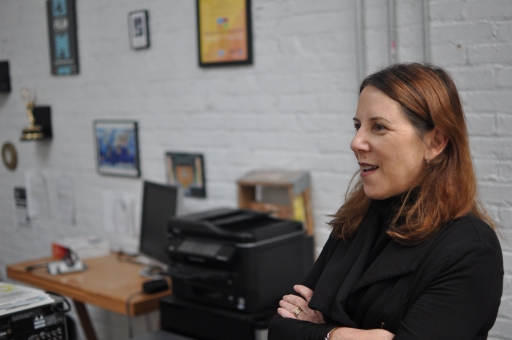 Filmmaker Norah Shapiro, who directed the documentary “Time for Ilhan,” talks about campaigning from her office in Minneapolis, Minnesota, on Oct. 23, 2018. She says Ilhan Omar wins campaigns because she gets broad support.

In District 60B there are tens of thousands of college students who attend both Augsburg and the University of Minnesota. Analyses of voter turnout indicate that Omar increased voter participation among those students.

That was one reason she cruised to victory on election night in 2016. The New York Times called her election “a bright spot in a sea of darkness.” After a victory party at an East African restaurant on Lake Street, complete with chants of “Go Ilhan, go Ilhan,” she began serving in the Minnesota House.

It was a moment of inspiration for many.

“She worked hard for it,” says Isse. “It wasn't easy for her in our community to understand that she is the candidate. A lot of times, you know, we have reservations about women running for office.”

“She represents and inspires many young Muslim women because people always stereotype about how wearing our veil is an oppression,” says Shabbeleh. “And once they see Ilhan, who is so progressive and really vocal they could see that, no, we’re exactly the opposite of what you assumed.”

More: These Somali Muslims in Minnesota find a home with Black Lives Matter

And she has inspired other Somali women. Earlier this fall, Sarah Mohamed Khalif, a 21-year-old Somali woman won a seat on a city council seat in Leuven, Belgium. On Twitter, she has praised Omar and said she too hoped to win an election.

In Sweden, Leila Ali Elmi is also inspired by what Omar has achieved. Elmi, like Omar fled Somalia when she was young. And like Omar, she went into politics. Earlier this summer, she was elected to parliament as a Green Party member. She’s watched Omar’s campaign and the success she’s had in the US.

When Omar first ran, Shabbeleh’s daughter was just 12 years old. Earlier this year, her daughter started high school and said she wants to run for student council. “Because she wants to start change. And that’s the kind of behavior Ilhan has inspired,” says Shabbeleh.

For Omar, the inspiration to get involved in politics came from her family, who were always talking about politics, world news and democracy over meals.

Next: This former refugee could win a seat in one of the whitest statehouses in America