People in St. Paul, Minnesota, light candles to remember Philando Castile in front of the governor's mansion on July 14, 2016. Many of the people who protest police shootings in Minnesota are immigrants or the children of immigrants from Somalia.

It’s like a very bad, very politically incorrect joke: What’s worse than being Muslim or black in America?

“Technically we have it double as bad,” says 27-year-old Filsan Ibrahim. “Because we’re Muslim and black.”

Ibrahim says Somali Americans have been hesitant to claim black identities in the past, because they associate being black with being powerless. But now, she says, young Somali refugees are participating in Black Lives Matter Minneapolis protests and rejecting what they’ve been told about African Americans. There are about 25,000 Somalis in the Twin Cities, according to the 2010 Census, and many have taken an active role in efforts to curb police brutality here, especially since the shootings of Jamar Clark in November 2015 and Philando Castille this past July.

Listen to the podcast for more on this story

Young Somali refugees are claiming a black identity, joining with the Black Lives Matter movement — and rejecting what they’ve been told about African Americans. That's the latest episode of Otherhood. Subscribe wherever you get your podcasts.
Otherhood in iTunes

“A lot of us have been told not to speak with, or talk to, and be weary and limit the interactions we have with African Americans,” Ibrahim says. Her family came to the US in 2000 and she grew up in a small, very white Minnesota town. “Because they tend to be scary, they tend to be violent, they tend to be gang members.”

But growing up in America, Ibrahim and other Somali youth began to feel like they were being excluded and discriminated against much like African Americans. By studying history and learning about the Black Lives Matter movement, they realized that African Americans have been living under similar suspicion for generations.

"African Americans have really had to put up with slavery and Jim Crow and structural," says Awale Osman, 23, a friend of Ibrahim's who helps organize a debate group for Somali high schoolers. "Growing up in a Somali community .... [we] didn't have to deal with all those challenges." 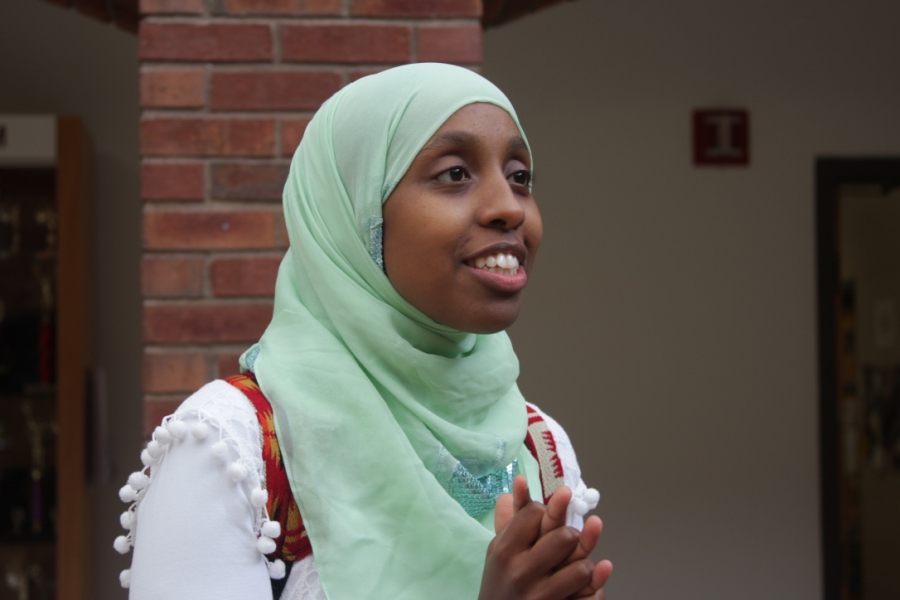 “Technically we have it double as bad,” says 27-year-old Filsan Ibrahim. “Because we’re Muslim and black.”

Osman says Somali refugees and African Americans should respect their separate experiences and help each other heal. Nimo Omar, a college sophomore studying political science, who is also part of Black Lives Matter Minneapolis’ communications committee, says Somalis still have to be conscious of being seen as black in America.

“When I walk down the street as a woman, yes, the first thing people might see is my hijab, but the second thing they see is my skin color,” Omar says. “Like, my brother, visibly a black man. They’re not going to care what his religion or his ethnicity is.”

Shifting their perspective was just the first step for Omar, Ibrahim and other Somali Americans. Convincing their families and other people of color to stand with African Americans was next. And after that, they began dealing with the frustration of how mainstream media portrays Muslims and Black Lives Matter protesters. Citing one example, Osman recalls her friend carrying wood at the Minneapolis police station where demonstrators were camped out to protest Jamar Clark's death. A reporter saw her friend and reported it incorrectly, Omar says.

"The reporter reported that she was carrying bricks and they were throwing rocks," she says. “It’s a huge struggle when you’re reading things that are definitely false and, you know, you were there and you witnessed it first hand."

Omar says that's why she and other protesters try to talk to reporters of color.

"Because you know how it feels — and we all know that the media is not for us," she says. "It’s never going to be for us.”

Mukhtar Ibrahim, one of the few Somali Americans working for large news outlets in Minnesota, watched many of the interactions between reporters and protesters play out. Ibrahim was a reporter for Minnesota Public Radio News until he recently left to go to graduate school.

“The funny thing is, when I was doing the reporting on the Black Lives Matter on the Jamar Clark case, I was with two other reporters. One was Asian. Another one was white,” he recalls. “And one guy said to us, to the white woman, 'You go back to England.' And he said to the Asian looking reporter, 'You go back to China.' I was just standing there. He didn’t say anything to me. And it was just shocking to hear from people protesting police brutality.”

But Ibrahim explains that he understands where protesters' distrust of reporters comes from. Protesters, he says, feel that the mainstream media repeats government and police narratives.

"I think journalism is an important field that can connect communiies, change people's minds. It's very powerful," he says. Ibrahim wanted to bring more insight and nuance to stories of young Somali Americans who had left Minnesota, but the reporting wasn't easy. Sources he reached out to thought he was a government agent, because of the widespread fear that people within the Somali community were FBI informants. Then, when Ibrahim covered the trial in May in which young Somali men were found guilty of trying to join ISIS, security guards didn't recognize him as a member of the press, even though he was wearing a press pass with his photo.

The complicated atmosphere in Minnesota — where terrorism cases and police tensions are converging — has been confusing to navigate for Mukhtar Ibrahim, Nimo Omar, Awale Osman and Filsan Ibrahim. But they all express hope that the tension means things will actually change.

"All these tensions are bubbling up, people are finding who they are and voicing thier opinion more than ever more," Filsan Ibrahim says. "What a time to be alive right?"

This is the first of a two-part Otherhood episode about Somali Americans in Minnesota. Share your thoughts by leaving a message at (802) 526-4763, or (802)-52-OH-POD. Please subscribe to our podcast here.