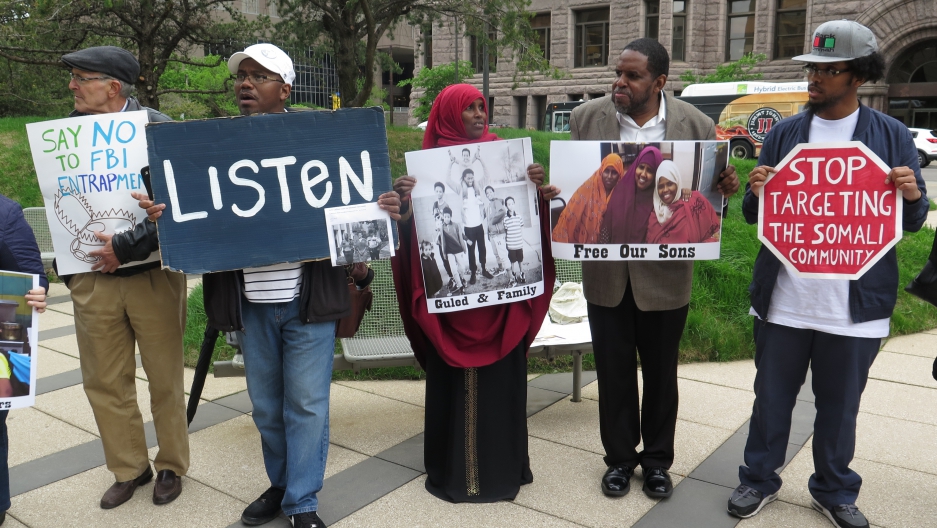 Supporters of three young Somali Americans on trial for plotting to join ISIS in Syria.

Three Somali Americans charged with plotting to travel to Syria and join ISIS were convicted last Friday of conspiracy to murder overseas and other charges.

Minnesota Public Radio reporter Doualy Xaykaothao says the verdict has deeply polarized Minnesota's Somali community, with some families accusing others of offering specious testimony that might result in the three young men spending the rest of their lives in prison.

During the trial, the mothers of the three young defendants would file into the courtroom daily, in bright head scarves.

To the prosecution, they are the parents of ISIS terrorists. But the women insist on the innocence of their sons.

The women all fled civil war in the Horn of Africa. Now the dream that America would provide a new life for their children has all but vanished.

"All the allegations that are against my son are untrue. We are not terrorists. Never been and never will be," Fadumo Hussein, mother of defendant Guled Omar, tells Xaykaothao. "We love this country more than you guys. We live here, we left a civil war, we know what it means."

The women's three sons are part of a group of nine Minnesota men arrested on charges of conspiring to travel to Syria to join ISIS. Six of the friends pleaded guilty to lesser charges.

Xaykaothao says the atmosphere in the Minneapolis courtroom was tense. Ayan Farah, the mother of defendant Mohamed Farah, told reporters she wasn't permitted to return to the proceedings after she took a younger son to the restroom.

"It's a very uncomfortable time right now, not only just for the mothers but for the community," Xaykaothao says. "You have high security here, even inside the courtroom ... and part of that is also that they have people who are in the courtroom looking straight at the family members who are sitting behind us, [because they're] concerned about potential threats in the courtroom and of course outside."

A young Somali American named Abdirahman Bashir had befriended the defendants, but the trio didn't know Bashir was a paid informant. He used a hidden microphone to secretly record conversations with the young men. He testified during their trial.

"That's what the Somali American community is concerned about," Xaykaothao says. "Who was the brains behind this? ... How much of a role did this paid informant have in sort of influencing these young men? Were they already sort of radicalized before or after this man came along?"

Bashir's testimony may impact the defendants for years to come. The three young men face a possible sentence of life in prison.

PRI's The World host Marco Werman spoke to Doualy Xaykaothao about the case a few weeks ago as well: