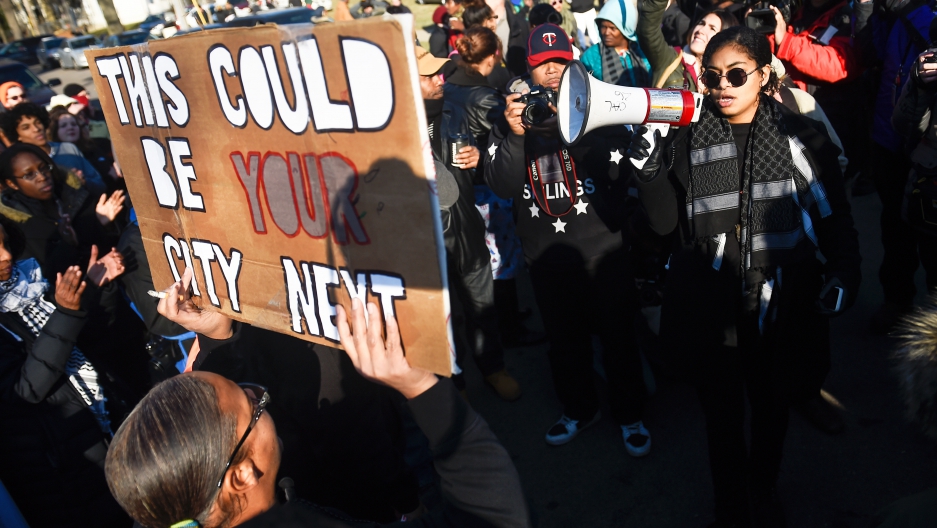 Mica Grimm, right, speaks to a crowd of the group Black Lives Matter before they march to city hall during a protest in Minneapolis, Nov. 24, 2015.

Jaylani Hussein had a busy Tuesday.

In the morning, he took meetings and began crafting a press release to show solidarity with protesters who were shot at the night before. Then he went out to join them.

By about 1 p.m., he is standing in the bed of a red truck outside the 4th Precinct police station in Minneapolis. People fill the block, which protesters have turned into a camp as they seek justice for Jamar Clark, shot and killed by a police officer on Nov. 15. Hussein is in a line of speakers who rally the growing crowd. Midwesterners like to avoid conflict, he says through a loudspeaker, but now it's time to stand up. He cites the Quran.

"If you save an innocent life, it's as if you save mankind," he tells them. When people agitate against police brutality they are advocating for the rights all of us. Sure, "all lives matter," he says, "but if there is no justice for one group, there's no justice for all of us."

On Monday night, the camp was attacked by gunmen who fired into the crowd and wounded five people. Still, the group's numbers swelled to many hundreds Tuesday afternoon as residents and supporters reaffirmed that they would not be intimidated. One demonstrator who was shot in the leg joined the protests again the next day, this time using a cane.

"It's raw emotion here," says Jayson Morris, a 25-year-old veteran who completed his military service in February. He joined the protests last Wednesday. He grew up in the neighborhood and lives just a few blocks from where Clark was killed. On Monday night, he was trying to calm things down when the shooting at the camp occurred.

"I heard they were saying racist stuff, so I advised them to leave. I told them, I'd watch their backs so they could leave," he says. When he turned his back to the men — pop, pop, pop. Then he saw bodies on the ground. One demonstrator had an abdominal wound. Morris tried to stop the bleeding and keep him conscious until an ambulance came.

Jayson Morris has been protesting the police shooting of Jamar Clark since Wednesday. On Monday evening, armed men shot into the camp. Morris says he will keep fighting.

Monday evening, before the shooting, Morris spent time around a fire talking with four immigrants from Somalia. They discussed religion and society and what it's like to be black and Muslim in American. The hostility is so bad that some of them, he says, feel like going back to Somalia. Morris gives a small laugh and says he considered asking them to take him along. He is Muslim too, but he's never been to Somalia before.

Hussein immigrated to the US from Somalia with his family in 1993. He was in elementary school. As a child, he says, he learned very quickly what it means to be not just African in Minnesota, but an African American. He grew up in north Minneapolis, the largely African American neighborhood where the protests are happening now, and spent his freshman year at North High School.

"I felt welcomed. The only community that wanted me here, that accepted me here, were African Americans," he says. They greeted him with "Hey brother" and "How you doing, brother?" As a newcomer, he remembers, he really appreciated that kind of warmth.

In sixth grade, Hussein's teacher assigned the 1971 novel "The Autobiography of Miss Jane Pittman," which helped him imagine African American history and the power of abolitionists through the Civil War. The book increased his appetite for history and poetry and writing. He came to love "The Autobiography of Malcolm X," which brought the Muslim and African American struggles together.

"I had an early wakening to history that taught me a lesson in identifying myself as an African American. As part of the history of this country," he says.

In January, Hussein, now 33, became executive director of the Minnesota chapter of the Council on American-Islamic Relations. His focus is on educating people about extremism and continually dispelling myths about Muslims. He works on individual civil rights cases to ensure Muslims freedom to practice their faith. But the issue of police brutality and getting involved with other social justice organizations was already part of CAIR's work. And now, the Black Lives Matter struggle in Minnesota is coming to the fore.

Since last week, Hussein has spent at least one hour every day with the protesters. For the last two Friday prayers, he's given sermons that connect what is happening to Muslims in France with the Black Lives Matter cause. He is working to create regular roundtables to help local social justice organizations to communicate and mobilize together.

By 4:30 p.m. on Tuesday, Hussein has marched to downtown Minneapolis. Between City Hall and the courthouse, demonstrators are joined by office workers, in suits and heels, and high school students who walked out of class. They are flanked by police cars, the loud echoes of helicopters hovering overhead. He was surprised by the turnout. "I thought people would be afraid to show up because of the violence," he says. Organizers said the crowd numbered to as many as 1,000.

An hour later, we're in my car, going in circles around downtown traffic. Hussein's mind is running from topic to topic, but his voice is calm as he fields calls from colleagues who are worried that he won't make it to his next event. We're at least 20 minutes from the University of St. Thomas in St. Paul. He makes rough estimates of his arrival time — maybe 15 minutes? — and keeps his voice even. In between, he talks about his childhood, FBI activity in Minneapolis, and the case of a woman who was attacked for speaking in Swahili. He transitions into foreign policy and the nature of the media.

Just after 6 p.m., he's speaking in front of a crowd of several hundred people, mostly Muslim students and their classmates. It's the Tuesday before Thanksgiving, but the hall is still close to full. As Hussein talks, organizers open a balcony area of the auditorium to accommodate more people. Hussein discusses the lives of Muslims and the hate they have endured since the attacks in Paris last week — and in American history. Thomas Jefferson, he says, was the first president to be accused of being a Muslim. He says that everyone needs to speak up to counter misinformation.

Jaylani Hussein, executive director of the Minnesota chapter of the Council on American-Islamic Relations, speaks to students about everyday Muslims and fighting hate at the University of St. Thomas, St. Paul, on Nov. 24, 2015.

"When we allow the extremes to dominate our narratives, that's how as a community we lose ourselves," Hussein says, referring to ISIS, but also the US government. "We have to get out of our comfort zones. We have to be accountable for the things our government is doing."

But he also implores the students to join the Black Lives Matter movement. "The way I look at Blacks Lives Matters is as Civil Rights 2.0.," he says. It's an iteration of history. That peaceful protesters were hit by gunfire should light a fire in our conscience, he says.

Back at the Fourth Precinct, Morris stays with the camp. He stayed through Monday night, before and after the shooting, and will remain again through Tuesday. He helps keep the fires going for warmth, as supporters drop off wood, hot beverages, food and supplies. He looks at the new people who have joined the protest, who he's never seen before and admits he is worried about how to keep everyone safe.

"It could be an Aryan [Nation person], it could be anyone," he says. But he does not want his fear to make him stereotype people. Morris stays because he wants to see justice for Jamar Clark, but he's also there for his own healing. There is a community at the 4th precinct, a group of people who understand the trauma of witnessing violence.

"If we leave this little street, am I going to get shot like Jamar?" Morris asks. "It's a damn shame, but we feel safe in the street. More than in our own homes."

By the end of the day, Minneapolis police say they have arrested three men in connection with the shooting.

It's almost 9 p.m. and Hussein is still fielding questions from students, even though the event has officially been over for an hour. He tells them they can join Morris and the other demonstrators at the Fourth Precinct, if they want. They would be welcomed.