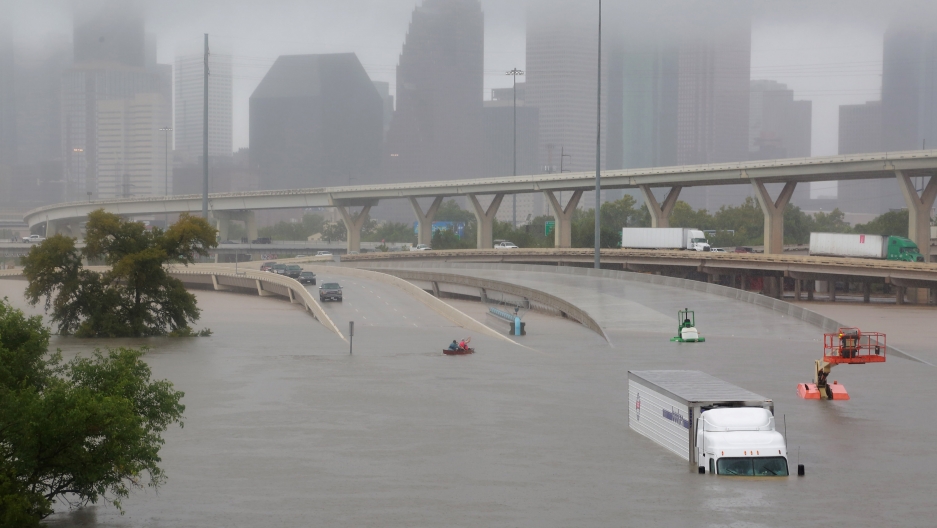 Widespread flooding submerged Interstate Highway 45 in Houston. Hurricane Harvey dropped up to 61 inches of rain on parts of Texas and Louisiana, Aug. 27, 2017.

Texas’ 7th Congressional District in western Houston and its suburbs has been a Republican stronghold since the 1960s when George HW Bush held the seat. But this year, the race — in one of the wealthiest districts in Texas — is a dead heat. One of the issues is Houston’s ongoing recovery from Hurricane Harvey and future threats from climate change.

Hurricane Harvey was the second costliest natural disaster in US history — $125 billion in damage. When the storm hit last year, flood waters rose up to about three feet in neighborhoods like Meyerland in southwest Houston.

“It’s got about 4,000 homes and 95 percent flooded and maybe only a few hundred did not,” says Art Pronin, president of the Meyerland Democrats, driving around the area. 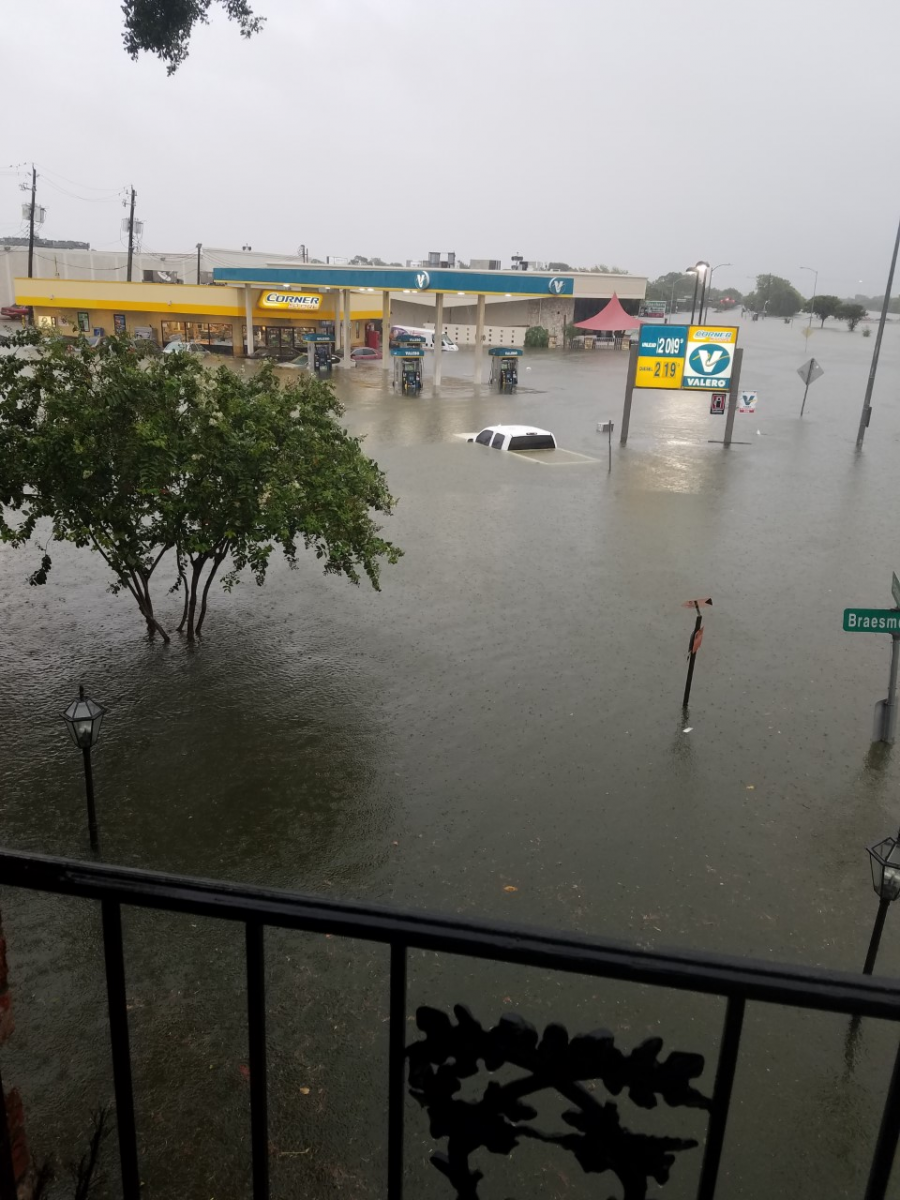 The Houston neighborhood of Meyerland during Hurricane Harvey.

Meyerland has flooded multiple times in recent years due to its proximity to a creek, or bayou as the locals call it, that can overflow during severe rainfall events. Pronin says residents have been repeatedly promised infrastructure improvements, but they feel forgotten.

“Still got a mortgage, stuck in a house that has flooded multiple times, can't sell it,” says Pronin. “There’s just this mounting sense of agony out here, because another Harvey, another flood, and I’m not sure what will hang on here.”

Pronin wants the flow of federal dollars sped up to help reduce the impact from future floods. He’s also worried about the growing influence of climate change in making big storms even bigger. But the man who represents this area in Congress, a nine-term Republican incumbent, John Culberson, has long questioned the scientific consensus on climate change.

“To this day, even after Harvey, John Culberson will not admit to man-made climate change,” says Pronin.

The Houston Climate Forum showed that #TX07 voters agree—climate change is one of the most pressing issues facing our world today, and we're ready for an advocate who will prioritize addressing what we can do about it. pic.twitter.com/e1JU4qAqVj

But that was during the Democratic primary. Today, she still talks about flooding, but you won’t find any mention of climate change on her campaign website.

Her campaign rejected interview requests to discuss the matter, as did John Culberson’s.

Like Fletcher, Culberson has been talking about flooding in his campaign, highlighting his work pushing aid in Congress for Houston's recovery after Harvey.

It’s an honor to have @MattressMack supporting my campaign, because of my record helping Houston after Hurricane Harvey. Watch our new ad today! #TX07 pic.twitter.com/csMx0GSAyK

But nationwide polls show that climate change just isn’t a big deal for most voters. And in conservative Texas, avoiding talk of climate science altogether ... it’s not unusual.

“I'd say people are a little bit wary of using the term,” says Anne Olson, president of the Buffalo Bayou Partnership, a nonprofit that oversees a 10-mile stretch of a creek that flooded last year.

And the topic doesn’t have to be taboo.

“If you’re practical about it and not hysterical, and have concrete solutions, then I think people will listen,” says Bill White, a former Democratic mayor of Houston. (His home also flooded last year during Harvey, by the way.)

During White’s mayoral tenure, 2004 to 2010, he talked up energy efficiency. And Houston, a city that runs on oil and gas money, invested heavily in renewable power. White adds that voters were more than OK with that: “Not sort of bragging, but I was re-elected by 91 percent here.”

Still, talking about these issues in Texas can get you in trouble.

“For Mayor White, he’s not Governor White because in 2010 he ran a gubernatorial campaign against Rick Perry, and Perry attacked him on his environmental record, and he lost by 13 points,” says political scientist Mark Jones at Rice University’s Baker Institute.

This year, Jones says the congressional race in west Houston and the suburbs is really a referendum on President Donald Trump, and that’s why this deep red district is competitive for the first time in 50 years. So, Jones thinks Lizzie Fletcher’s cautious approach toward climate change is wise.

Jones says Fletcher doesn’t want to give Republicans who are leaning toward her any reasons not to vote for her, for instance stoking fears that her environmental policies could adversely affect their livelihoods.

For environmentalists, they get how the climate game is played in Texas and why Fletcher has backed off the climate issue.

“It's disappointing and it's smart politics. The energy corridor goes right through her district. So I understand the complexity of it. I want her to get elected,” says Sandy Spears, a preschool teacher in Houston and climate activist with the group 350.org.

Spears has held handmade signs about climate change over the freeway overpass and hosts teach-ins on climate science. A few years ago, her story was unthinkable.

“I was born and raised Republican,” says Spears. “And then I realized where the money was coming in and kind of my heroes, they became fallen heroes, and I thought: ‘They're looking straight in the camera and saying something that is not true, and I know that they know the science.’” 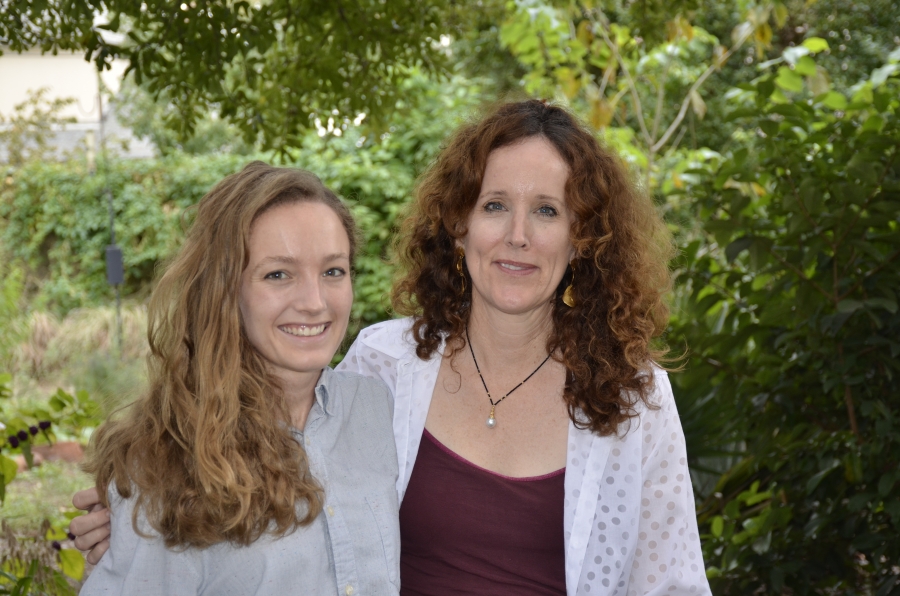 Sandy Spears, right, and her daughter Caroline Spears have been going door to door in Houston, highlighting various candidate’s stances on climate change.

Now, Spears is going door to door supporting candidates who she thinks get it on climate change. This year, they're all Democrats including Lizzie Fletcher. Spears says she’s seeing progress in her work. Before Harvey, many people used to ignore her.

“Now I have people come up and whisper, ‘Yeah I think climate change is true.’ So at least they’re admitting it now.”

And in this razor-thin congressional election — polls are calling it a tossup — it’s possible those whisperers could make the difference.